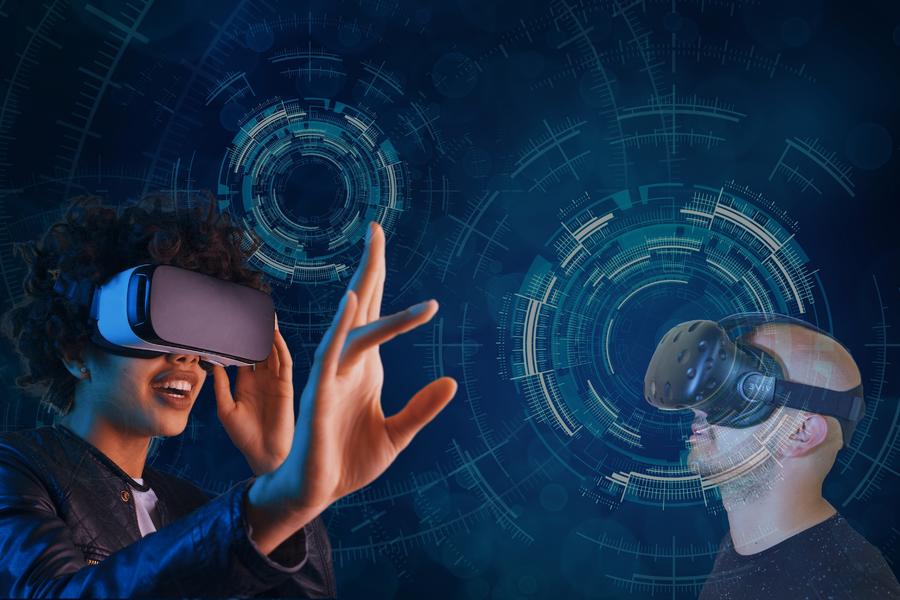 Since Facebook changed its name to Meta, tech investors in relevant fields all over the world seem to have found a new direction. As the epitome of virtual-reality technology, OASIS (Ontologically Anthropocentric Sensory Immersive Simulation) in the movie Ready Player One can be regarded as one of the final forms of the Metaverse. Through OASIS, people can live another life in the globally networked virtual reality world. This concept with its strong futuristic elements can no longer be ignored by any investor who wants to profit in the field of science and technology in the 2020s.

Analyzing the essence of Metaverse, EqualOcean views the concept as an aggregate of existing products and technologies including augmented reality, virtual reality, 3D holographic avatars, video, and other means of communication. When people discuss and invest in the Metaverse, they are actually discussing how to integrate the existing products with a large number of users and obtain several times the current profits through scale. The following analysis started from several presuppositions that all investors should be aware of.

Over the past two decades, the term Internet has almost been regarded as a synonym for modern times in China’s markets, giving birth to many well-known tech giants. But by 2021, the whole Internet industry seems to have reached a ceiling. The Internet is no longer a new thing for both individual and institutional investors because it is difficult for this industry to tell a new fascinating investable story. As Bankrate stated, a compelling story is one of the best frameworks for creating a stock bubble. 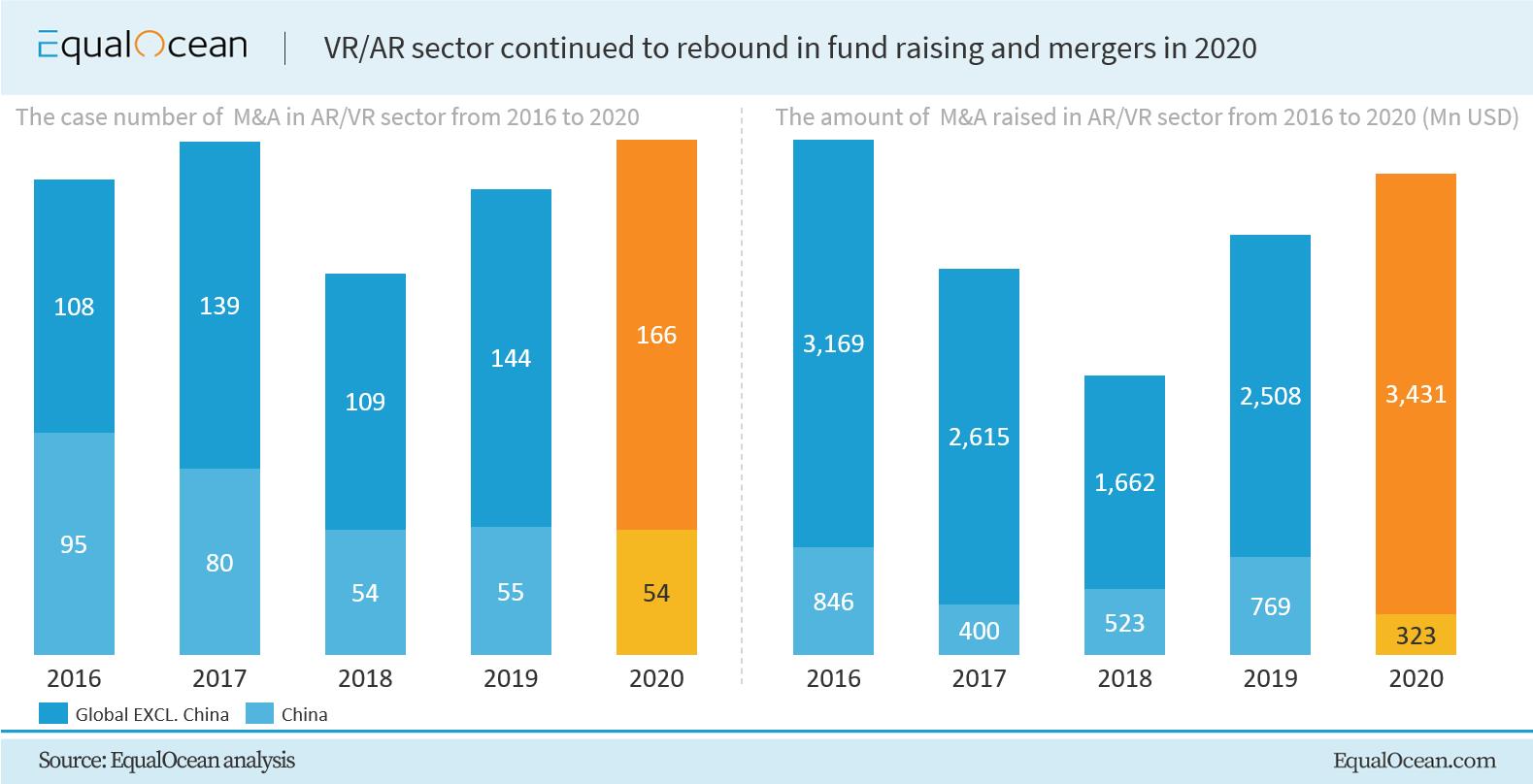 In this sense, the emergence of the concept of Metaverse coincides with the times. There are many types of companies that took advantage of this theme, including all-in-one giants like Tencent, reviving stars like Soul App, and a number of companies that follow the trend like Yahaha.com. To many entrepreneurs, not catching such a trend means enormous opportunity costs. The return of the popularity of the AR/VR field also proves the potential of this field. In 2020, the amount raised and the number of funding cases in the AR/VR sector continued to rise (or rebound). The volume of  M&A raised in AR/VR sector is up 15% and the number of cases is up 11% year-on-year.

"Now, an exciting opportunity is coming. After ten years of development, Internet technology is about to usher in the next wave of upgrading, which we call Cross Reality Internet. A series of basic technologies from real-time communication to streaming media have been developed, and the computing power of devices has been rapidly improved, which promoted information transmission and human-computer interaction more quickly and conveniently."

We believe that from the perspective of development, Cross Reality Internet can be regarded as the transition stage from Mobile Internet to Metaverse. Cross Reality Internet can, and can better solve the core requirements such as multi-entry, real-time, high concurrency, and high fitting. The Metaverse, as the final form, tends to develop all technologies to a mature stage, with high fitting off-line and on-line. We predict that Cross Reality Internet is the only way for China to finally realize the metaverse, and it is likely that China will reach this level ahead of the traditional developed companies. The better 5G infrastructure nets, the faster development of IoT layout are the key factors for China to win the competition. 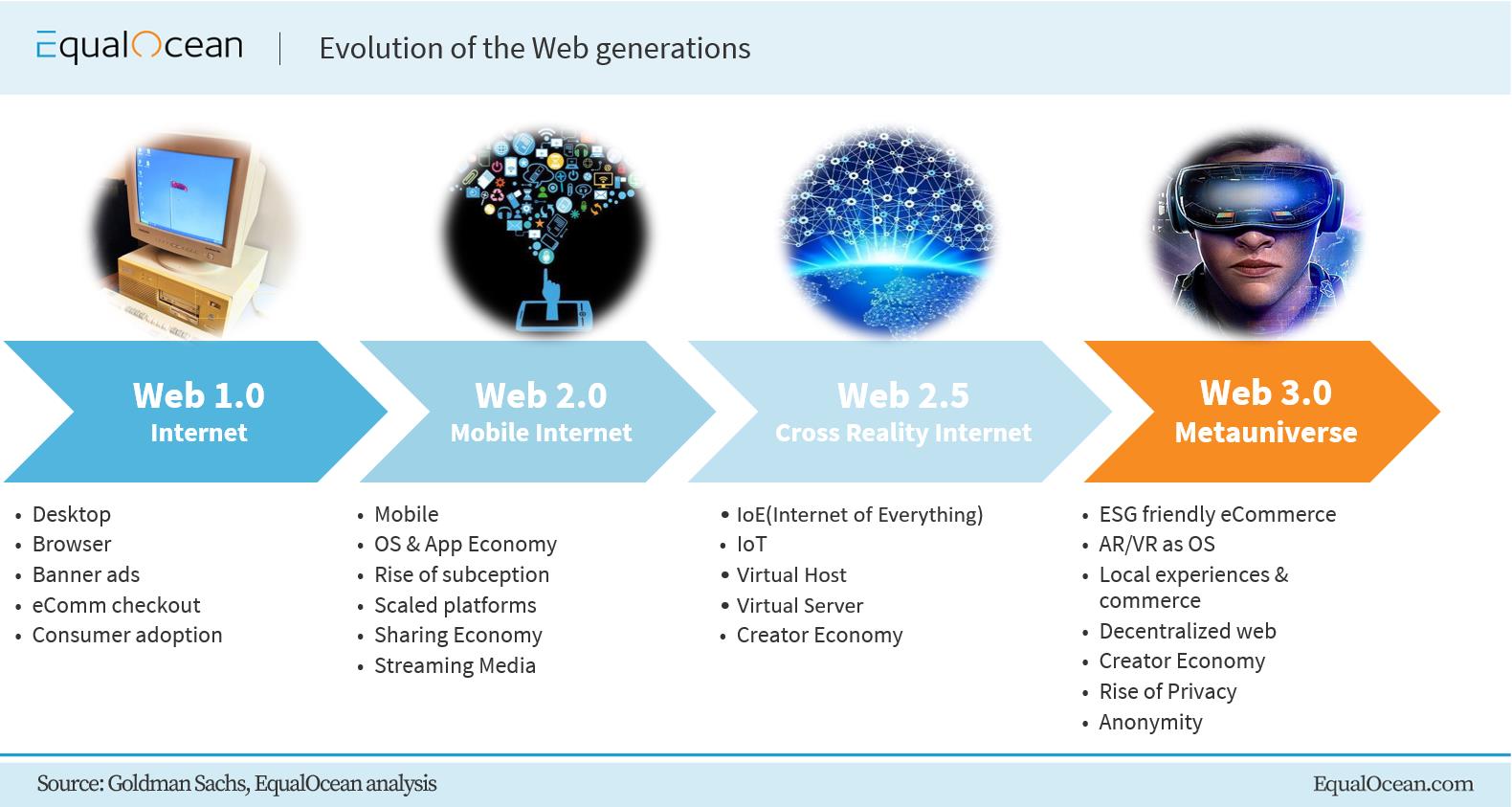 In the Chinese market, Tencent is considered to be the giant with the most potential to embrace the Metaverse ecosystem and tech system. In recent years, Tencent has continued to invest in companies and products related to the concept of Metaverse, including pioneers Roblox and Epic. For Tencent, multi-year investment, research, and technology accumulation in-game area also became its stepping stones in the process. We believe, the 3A game, Open world, to be developed by Tencent will become the initial infrastructure. With the continuous boundary-breaking of the game world, the world may gradually absorb many fields such as finance and education, so as to gradually form a Cross Reality Internet, then form a Metaverse ecosystem.

It is generally believed in the industry that the opportunities brought by the Metaverse not only help the tech giants, but also small and medium-sized companies with technical strength. However, it is worth noting that Tencent has always had the same CAK ('Copy, Acquire and Kill') strategy as Facebook (Meta), and investors' exit strategies may be different (BAT round instead of IPO)

'Astronauts' of the Metaverse

We analyzed small and medium-sized companies that may present strong future potential from four dimensions: 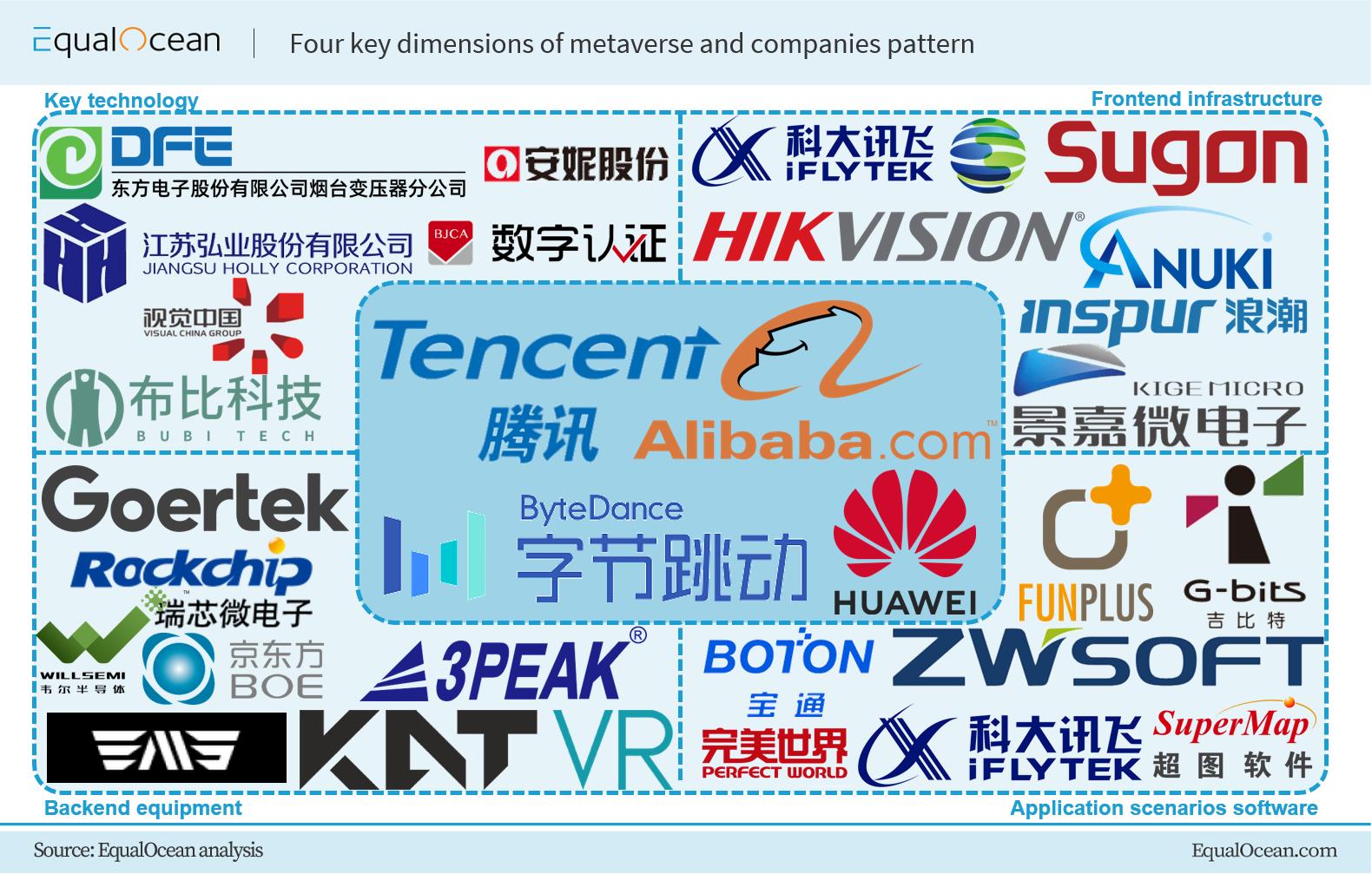 Blockchain, NFT, and virtual currency, as the core technologies of the meta-universe, can provide scarcity for the virtual world. These technologies are the basis for the establishment of social systems, legal systems, and business systems in the Metaverse ecosystem. Bubi Tech is a rapidly growing blockchain financial technology company in China, focusing on the innovation of blockchain technology and products. It has been applied to digital assets, equity bonds, supply chain traceability, joint credit investigation, and data security areas. In the field of NFT, at present, NFT companies and start-ups are mainly concentrated in three fields: digital collections, game assets, and the virtual world. We think Vision China and Annie shares are targets with more potential.

At the infrastructure level, 5G and 6G in the future are still the focus for investors. Among them, we believe that ZTE, no doubt, as a leading company, is the best investment target. However, investors should pay attention to the risks of Sino-U.S. relations. In addition to large companies, Yunta Tech is also a company worthy of attention in the 5G/6G field. Its focus is on the research and sales of RF front-end chips and filters. In September 2021, the company released three filter chips of 5Gnrn77 band (3.3 to 4.2ghz), N78 band (3.3 to 3.8ghz), and N79 band (4.4-5.0ghz) independently developed by the company, which are the first batch of filter chips of sub-6ghz band officially produced in China. These all provide the value of laying out the company.

Backend devices mainly refer to AR/VR, smart wearable, and omni-directional treadmill (ODT) fields. Metaverse undoubtedly makes the VR/ R field rebound in recent months, but we do think it still needs a killer using scenario or, say, function (like the heart rate function monitor to Apple watch). EM3, a Chinese VR start-up that we believe is a good investment target. It released an ultra-thin VR glass prototype in 2021, Ether. The thickness of Ether is only 6.8 mm with a weight of only 37g, making it the lightest VR near-eye display device by far. In the field of ODT, KAT VR, as a start-up, should be mentioned. The company focuses on the research and development of VR interactive equipment, including virtual reality interaction technology, motion capture technology, and ergonomics, and has hundreds of independent intellectual property patents in China. KAT VR, in September 2021, obtained ten million series A+ financing activity.

We believe that the first developed sectors of the Metaverse will be games, smart medicine, industrial design, and smart education. Among these industries, the gaming field has the greatest potential. FunPlus is a global digital entertainment company that we think has great potential. At present, Funplus has developed and released mobile games such as the State of Survivor, King of Avalon, and Guns of glory, which are all meta-shaped and popular all over the world. It has connected players from more than 200 countries with games and has more than 100 million users. With the world's leading infrastructure and interactive technology construction technology, Funplus is committed to creating a game Metaverse of players all over the world, which, we think, makes it is a very worthy target.

In 2017, Decentraland went public without drawing too much attention, which, we think, maybe because the Mobile Internet had not yet reached its peak of development. However, we think beginning with 2021, the peak has been reached. The re-popularity of Roblox and NFT are in fact proofs of the evolution of investment trends. We are now in the Web 2.0 era, which made possible the efficient circulation of information. But in the future Web 3.0, we will see the efficient circulation of data and assets, with ownership of data assets. Therefore, we believe that the Metaverse is the next investment theme with potential strong growth following the traditional Mobile Internet era. It will be wise to early layout small and medium-sized companies that may become the main force of building Metaverse ecology in the future, just like buying Bitcoin in 2016.

EqualOcean is an investment research firm and information service provider focusing on China's Technology, Automotive and Consumer Internet sectors. With unique research and due diligence methodology, we provide tailored insights into a wide range of industries and companies, empowering our clients' value-added decisions.

Founded in 2014, EqualOcean is headquartered in Beijing and has offices in Shanghai, Shenzhen and New York.