Carnex.ca, a used car online dealer company specializing in the trade of used EVs with high quality in Canada, is accelerating its path of expansion. 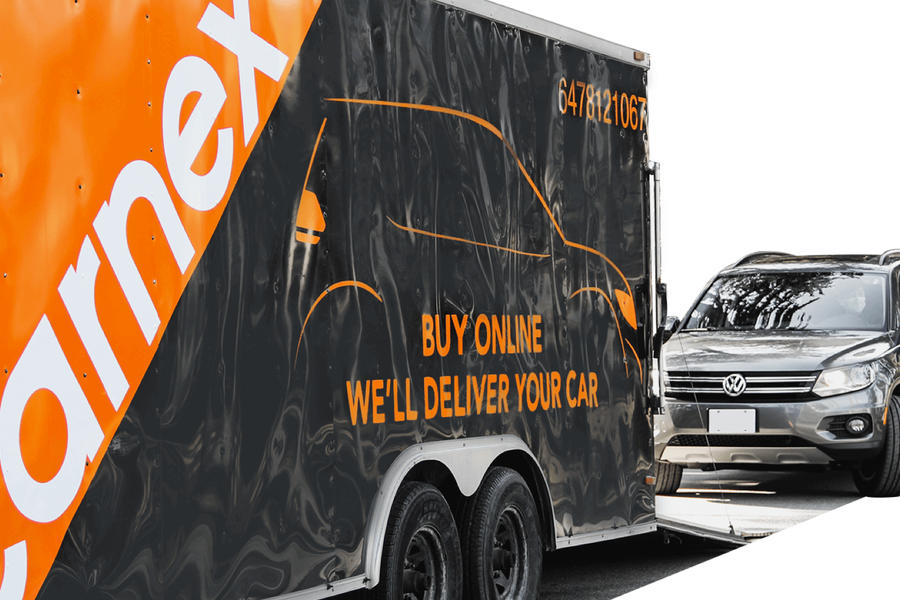 In 2012, Lorde sings on Royals that 'We don't care, we're driving Cadillacs in our dreams'. Ten years later, young people are still driving cool cars in their dreams, but the brand has changed from Cadillacs to Tesla. Bruce Wu is also one of the persons who have such dreams, and what makes him different is that he helps people make their Tesla dreams come true.

As an innovator of the industry, Bruce founded Carnex Canada in late 2020 (commencing operations in 2021) as a used car online dealer company specializing in the trade of used EVs with high quality in Canada. The startup aims to make purchasing EVs easier and more convenient for all EV enthusiasts, especially people who want to own an EV at a lower cost. When browsing their website, we found that for every sold or in-stock EV, Carnex provides 360° detailed pictures with highlights of the parts needing attention, especially the imperfections, from the chassis pictures to chipped paint spots. One reason for its bravado was that no accident EV could make itself onto Carnex's collective radar and detailed and professional 170-Point Vehicle Inspection Checklist are provided to customers as standard service.

When talking about the initiation of starting such a business, Bruce told EqualOcean that he engrossed himself in Canada's aftermarket of vehicles immediately when he graduated and, in the past eight years, his team has tried almost every service in the area, starting from car wash to mechanic shop, collision center, wholesale, leasing company and even offline second-hand & aftermarket store (YST Autogroup). However, he found there are many problems existing in the traditional dealer market, such as nontransparent records, poor aftermarket services and excessive premium (cost). Moreover, people need to spend a lot of time haggling with offline dealers when they want a used car or get aftermarket services.

"Our team initially thought that the future for this industry was not that bright, then we decided to reinvigorate it"

Bruce is not the first person to have such ambitions. However, as a fan of Tesla, Bruce's team quickly discovered a more specific opportunity – they made a plan to become the king of EV aftermarket sales and thus founded Carnex.

As an EV enthusiast and Tesla fan, Bruce's team has been always learning from Tesla, which can also be regarded as an industry disrupter. Carnex is doing similar things in two ways: designing an online EV aftermarket system and building a reconditioning center for EV only. On the one hand, different from traditional offline dealers, the online EV aftermarket system can largely improve communicative efficiency by monitoring all the parts of EVs, which means EV owners know all the details before they visit the offline aftermarket stores. On the other hand, the EV-ONLY reconditioning center, according to Bruce, will focus on a number of models only. Considering Apple and Tesla, which only have one generation of products in a certain period, this business model is promising because the cost could be cut to a fairly low level through such specialization (even lower than EV producers).

One of the core beliefs of Carnex is full life cycle service. This means that the team cares about all challenges that EV drivers may have when buying EVs and aim to provide beyond-expectation services. According to Bruce, a 10-day free-return and 100-day warranty is just the beginning. We collected 163 comments from Google Maps and Nicelocal.com, 98.2% percent of clients expressed positive experiences and over 50% of comments mentioned that the process and services exceeded expectations, which we generally think is a hidden bullish highlight for Carnex as it grows and expands.

As with all startups EqualOcean covers, we care most about future opportunities and the potential of rising stars. Through in-depth analysis of the market combined with the Q&A from the interview with Bruce, we found 3 keys that make Carnex an attractive investment target.

1. Vast room for growth in both Canada and US EV market for Carnex

When we analyzed the market occupancy of EVs in the vehicle market, we found Canada has great space for growth compared with China. According to Plug'N Drive, a non-profit organization committed to accelerating the adoption of EV in Canada, EV adoption rates remain low in Canada and EVs represented less than 4% of new vehicles registered last year. However, this percentage figure has reached 20.4% in China (September 2021), according to BitAuto.com. Considering the high-density promotion policy of EVs in Canada, this indicates a huge opportunity. Bruce believes Canada's EV market will experience a 50% to 100% growth in 2022. 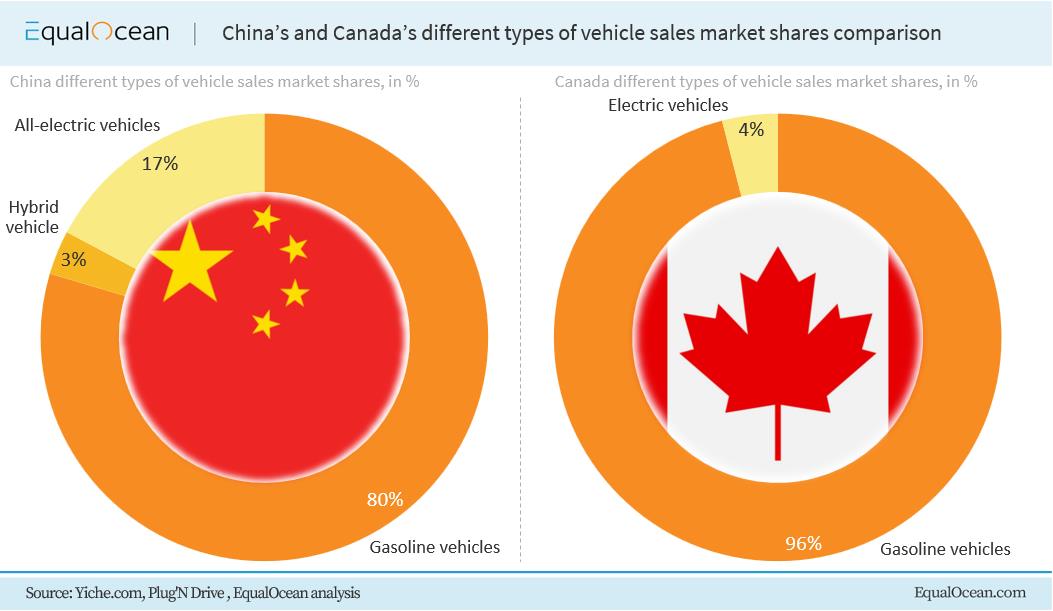 Another opportunity comes from user profiles. Back to Carnex, the EqualOcean team learned an interesting point that this startup has been focusing on all types of buyers in the local market rather than aiming to serve solely overseas Chinese as their clients, which is a markedly different strategy compared to that taken by most other overseas Chinese entrepreneurs. Due to the homogeneity of culture and language, the user base is regarded as a must-do target for most Chinese entrepreneurs. However, Carnex chose to not utilize this advantage and instead is building its larger local network. This undoubtedly shows potential growth, with their focus on the larger mainstream market in North America.

2. Specializing instead of competing

A clever bit of Bruce and its Carnex is that he understands well the market and Carnex's existing and potential competitors. Therefore, specializing is the key he used to win the game. On the one hand, compared with major competitors such as EV Network, Bruce mainly focuses on the aftermarket for young EV companies (new automaker, such as Tesla, NIO and XPEV) instead of the old guard automakers (such as Ford, Volvo and Volkswagen) providing great and low-cost systematic aftermarket services. It is because, thanks to years of experience in the vehicle industry, the Carnex team can provide equal or even better aftermarket services than that of new automakers at lower prices, even including Tesla. Specializing and systematization brought by the future Carnex aftermarket system and the EV-only reconditioning center could further cut the cost.

On the other hand, Bruce and his team found a huge market opportunity wherein used EVs pricing from CAD 20,000 to 40,000 is in great demand. He mentioned that almost all EVs in this price range could be sold within one day. However, there are few used models laying in the price range. Bruce said he found this mismatch and plans to explore this opportunity in the future by not only increasing the purchases but also building partnerships with low-cost new EV makers entering Canada, such as VinFast from Vietnam.  This also presents an opportunity for other new automakers, especially Chinese brands with lower prices. From a historical view, Japanese and Korean cars eventually took considerable market shares in North America even though the United States and Canada interrupted such trade. From this sense, EqualOcean believes that Chinese new automakers will eventually take a certain amount of market share in Canada, and Carnex will be a beneficiary.

As a used EV online dealer, residual value matters a lot. In fact, the logic of value preservation of electric vehicles (value logic) is completely different from that of traditional vehicles. The residual value of traditional vehicles is relatively low (with higher potential maintenance cost), while electric vehicles only have the maintenance cost caused by battery attenuation. The attenuated battery can be used as an energy storage device at home, still having values in other use scenarios. According to Bruce, Carnex has provided aftermarket services for many electric vehicles with over mileage over 200,000km, and the team found that there are very few fixed parts that actually need to be replaced or fixed. In North America, where labor costs are high, this, we believe, will become a decisive advantage for the team.

Besides the residual value, according to Bruce, EV users often have higher customer stickiness in Canada. Taking Tesla owners as examples, most of them would love to select Model Y or other large endurance Tesla models when trading in old EVs instead of turning back to gasoline cars. Notably, Carnex is becoming the largest used Tesla buyer (acquires from P2P, fleet sales or auctions) because many Tesla users are not satisfied with the official trade-in price. In November 2021, Carnex received over thirty Tesla used EVs in just one month. The high stickiness of these EV users, we believe, means Carnex could acquire high-quality used EVs from these users continually, indicating a sustainable development mode of the business.

Besides the 3 key opportunities for Carnex, the company has maintained healthy sales and profit in the past year. According to Bruce, Carnex's sales revenue has increased five to ten times compared with the beginning of 2021, and record monthly sales have surpassed CAD 1.5 million. In the meantime, the company generated a 5% to 10% gross margin every month. When compared with other used-only retailers, we think this is at a healthy level in relation to the competition. Carnex invests most revenue back into the company itself, and Bruce expects 100% to 200% revenue growth in 2022.

As for financing, EqualOcean learned that Carnex is preparing a new round of financing to quickly expand across the Canadian used EV market, starting from the whole market of Ontario. Bruce stated that his team at Carnex has acquired the technology and services to help them dominate Canada's used EV aftermarket, and outbound expansion from Ontario to nationwide is next in their plans.

Rethink as the trump card

“From the first day, we constantly rethink every link of the aftermarket: how to provide customers with better products and services.”

Bruce mentioned this at the end of the interview. The comments and Carnex's professional and detailed website are proof of this. Based on the discussion and analysis above, we view Carnex as a worthy investment target for an investor looking for exposure to the Canadian EV market.