The company's electric buses are driven in over 60 countries. 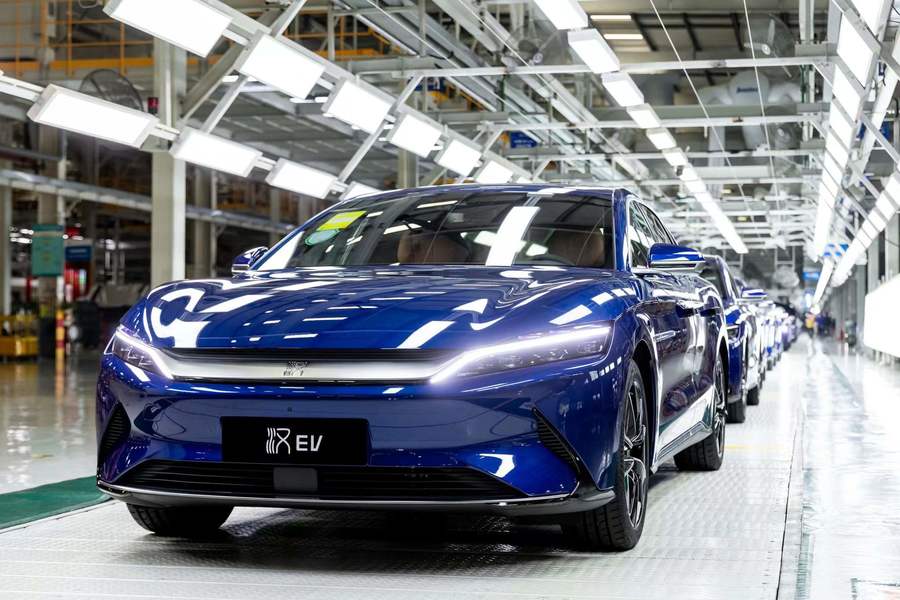 ●      Since its founding, BYD has vowed to become a world-class company. To achieve that goal, the company needs to generate more revenue overseas.

●      It has successfully promoted its electric buses to many countries, and the next step is to ship its flagship passenger cars abroad.

●      But the process will not be easy as the chip shortage and a new wave of Covid infections in China may affect its capacity.

●      In short, the company planned a car family that consists of the Ocean series, the Dynasty series and the Denza series, which cover the middle-to-high classes. Its vision is to disperse them across different consumer markets.

A decades-long investor in technology innovation in the NEV field, and with a lifelong ambition to be a global hardware leader, BYD is undoubtedly a company with a long-term strategy. BYD has laid down a global path for over 20 years. In 2021, the company sold 600,000 NEVs worldwide, of which over 90% were purchased in China. The domestic consumers' demand for its EV lineup seems endless. But to be a world-class conglomerate like Toyota, BYD needs to generate more revenue overseas. The company has aligned its development with the pledges of countries to achieve carbon neutrality by providing electric fleets to them. The next step is to replicate its success in China’s passenger car segment in other markets.

Humble Origins of an Auto Giant

The story of BYD’s emergence as an EV leader goes back to 1995 when its founder Wang Chuanfu incorporated the firm. After just three years, BYD set up the European business unit, its first foreign department paving the way for later product sales in markets beyond China.  In 1999 BYD launched the US and Hong Kong departments. The year 2007 was a breakthrough for BYD in that it sold 300 internal combustion engine cars in foreign countries. To gain international exposure, BYD received investment from Warren Buffet who betted on its EV prospects in 2008. Since then, the company's EV business started to take off, marked by BYD’s launch/debut of its K9 model in 2010. This model later became the top-selling electric bus in many countries. BYD sold more than 10,000 passenger cars in 2015, 2017 and 2018 abroad. 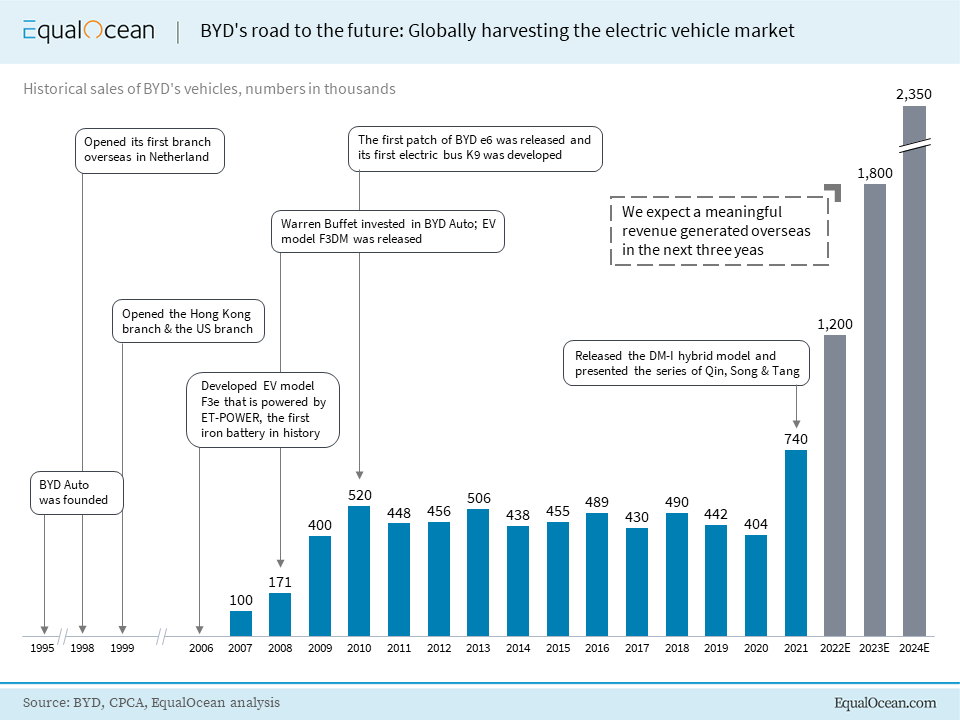 More recently, as global leaders reached a consensus on cutting carbon emissions, governments have surging demand for green mobility in public transportation. This marked the start for BYD to deliver a large number of its electric buses worldwide. According to Chatrou CME Solutions, a Dutch consultancy firm, the company owns 20% of the e-bus market of western Europe and Poland. It also holds a considerable market share in America. In 2021, BYD won a contract for 1,000 electric buses in Colombia. 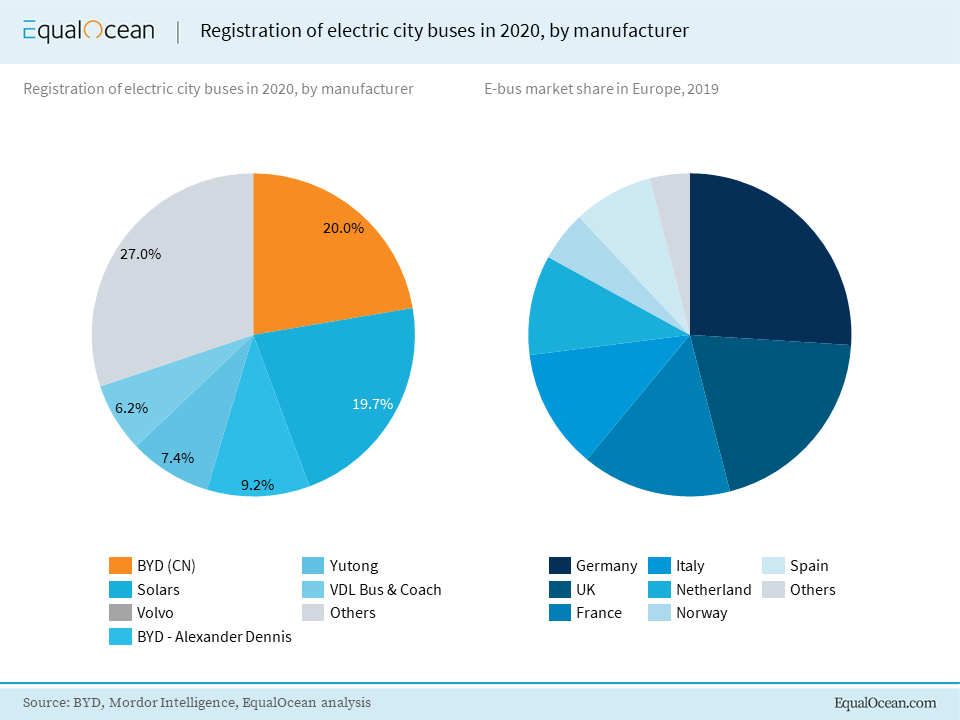 Not only does the company sell e-buses in these areas, it has shipped its passenger cars there; the company sold 1,000 units of its Tang model in Norway in less than half a year. Tang, a large-sized SUV, is a hit model of BYD’s Dynasty series that has proven to be a huge success in China Specifically, BYD sold 54,204 units of Tang in 2021, up 47.5% from the 36,753 sold the previous year. With the auto maker coming a long way since its earliest days, it's a reasonable assumption that BYD wants to replicate the domestic success of its passenger models in foreign markets. On the other hand, the company showcased the Han EV, also part of the Dynasty series, in Europe in 2020 and central America in 2021, but presale has yet to start.

BYD hasn't shipped many passenger cars to these regions because of the bottleneck in production. It encountered capacity problems amid the global chip shortage. Buyers of BYD models have to wait for up to four months at the moment to get the cars. As a result, the company gave priority to domestic delivery of passenger cars in 2021. Luckily, supply shortages may ease in 2022. According to statistics (link in Chinese) provided by an author on Xueqiu, China's answer to/equivalent of Seeking Alpha, BYD has a planned  annual production capacity of three million units allocated to 10 manufacturing base in 2022. The author also estimated the actual capacity would be about 1.9 million. On the demand side, the company expected to sell 1.2 million cars, which is not likely to surpass the actual production. So 2022 may see surplus capacity for overseas deliveries.

Of course, this year won't be plain sailing as BYD faces some risks. The chip shortage risk stems from the sluggish capacity growth in the semiconductor industry. In addition, China is experiencing a new Covid outbreak caused by the Omicron virus variant, and based on China's zero-Covid policy, production at a few of BYD's geographically scattered plants had been suspended. According to a company statement (link in Chinese), its factory in Xi'an, one of BYD's most important plants, stopped for several days and has since returned to normal.

For a discussion of chips shortages, see this article.

Charting a Global Course, One Series at a Time?

BYD still needs to generate more revenue overseas to become a popular OEM worldwide. Toyota and Volkswagen both generate over 80% of their total revenue from foreign markets. Similarly, Ford and GM make around 30% and 20%, respectively. For BYD with a huge home market, 10% to 20% is a better benchmark, which is a long way off.

All in all, BYD is just at the beginning of its global expansion. The company has unveiled several products in the pipeline, including five parts, mid-to-low-end product lines from its Ocean and Dynasty series, high-end Denza and a yet-to-be-debuted brand. The company's vision is to sell all its models to different overseas markets.