A Hotheaded Fantasy or Winding Journey? The Hydrogen Economy in China's Car Market

A longtime debate spurs on hydrogen energy about its sustainability and practical capacity of installing a green concept in sectors. Driven by a national goal of achieving carbon neutrality by 2060, China has been deploying hydrogen in transportation with unforeseen optimism. Will this balloon of expectation keep inflating or be pricked at a certain point?

Parallel to the precipitous surge of greenhouse gas emissions across the globe, hydrogen, a type of biofuels, has been marked as one solution in green energy industries nowadays, with proponents from national organizations to private incorporations. How have the global and China's markets reacted to this ambition of achieving decarbonized economy through hydrogen?

Conventionally, the hydrogen economy underlines an idea transiting from traditional fossil fuel to clean energy that generates zero-emission electricity for hard-to-abate sectors, such as long-haul transport and heavy metal industries.

From a scientific standpoint, hydrogen stands on an uncertain footing in terms of sustainability. It commonly derives into two types, gray and green hydrogen. Gray hydrogen is essentially produced by natural gas and coal, while 90% of green hydrogen is produced with solar or wind power. On the downside, these renewable energies are not continuous and cannot maintain a sustainable circular economy. Although challenges exist, some businesses have envisioned great potential in this sector.

"It's about 120 million tons of gray hydrogen produced annually worldwide. We see that as an enormous market opportunity," said Christopher Headrick, founder of H2 Energy Group Inc. in Tennessee.

As an independent party, Headrick's company produces green hydrogen from natural woody biomass and is planning to install five refuel green hydrogen stations for heavy trucks in Interstate 5, the main north-south Interstate Highway on the West Coast of the United States. With a prospect of expanding the business, he sets a goal of collaborating with Asian Pacific countries and drops a pin in China.

"China has the largest hydrogen market in the world. They are not using green, but gray hydrogen. Unfortunately, we do have to use something in between to get from A to Z in the transport sector," said Headrick.

As China has the world's largest population, the country emitted 10.67 billion metric tons of carbon dioxide emissions in 2020, according to Statista. The carbon dioxide emission per capita for China was 8.2 tons compared to 13.68 tons in the United States in 2020. For decades, the Chinese government is a frontrunner in clean energy development and has been cracking up investments in hydrogen applications, especially in hydrogen fuel cell vehicles, prompted by the goal of reaching carbon neutrality by 2060.  Predicted by the China Hydrogen Alliance, the country will output RMB 1 trillion (USD 152.6 million) in the hydrogen energy industry by 2025, and the demand is expected to make up to at least 5% of China's energy system. 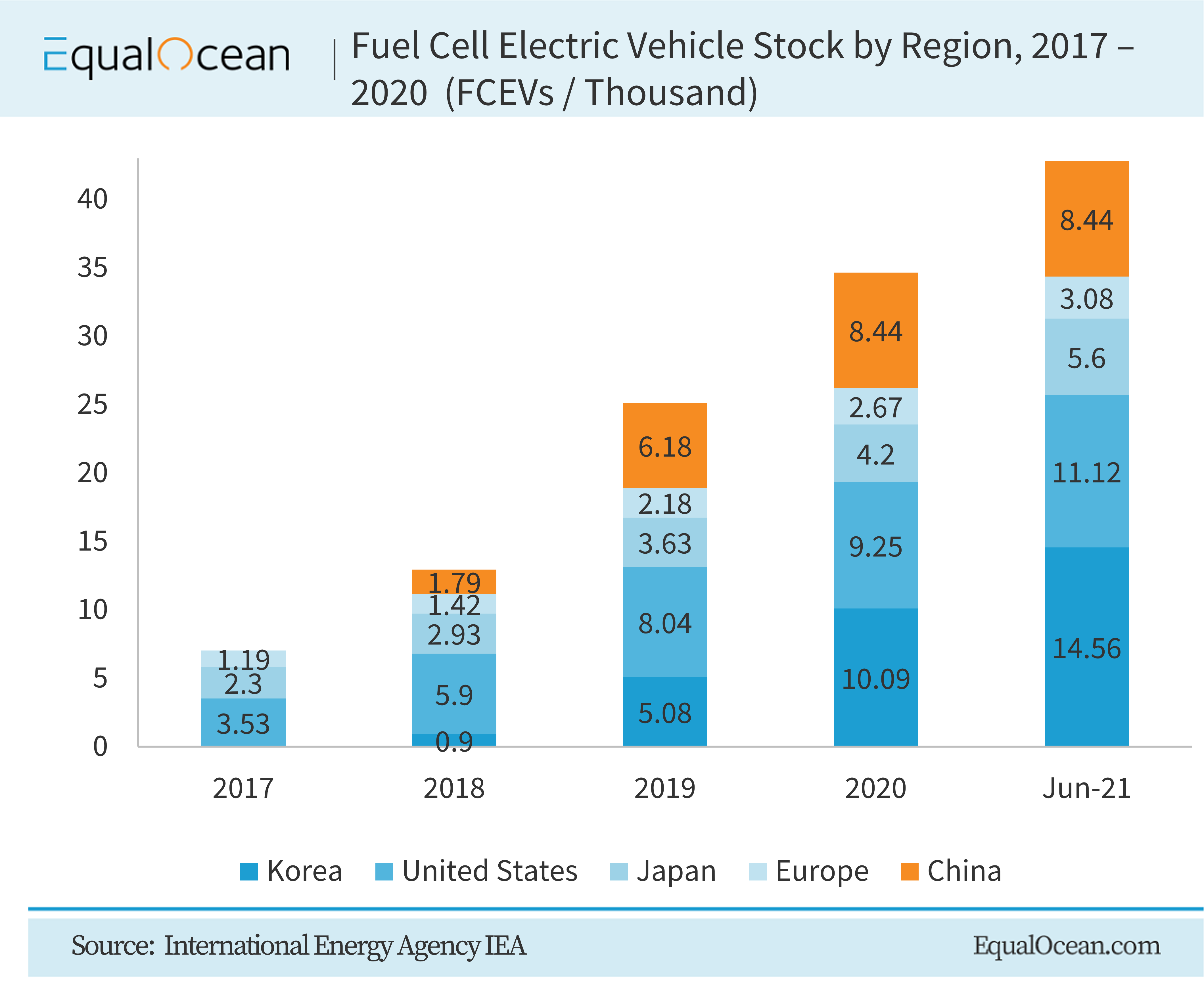 "At the moment, green hydrogen is the most expensive. We signed the 2025 Net-Zero Policy in the UK, and other countries in Europe are aligned as well. So increasingly, the future will be green," said Rattan.

Looking at the wider trajectory downwards, Rattan thinks that there are some conundrums and indeed debates across the world. He understands that critiques have mushroomed in routes to decarbonization, including agricultural, cement, and heavy industries.

"The potential is enormous," commented Rattan about the possible integral solutions in the transportation system, "Certainly there are hydrogen range extenders for emerging electric vehicles, and the market will decide."

For a long while, globe-trotting industrial pundits have criticized that hydrogen fuel cell vehicles lost natural advantages in the fierce vehicle competition of electrification.

"There are many people interested in green hydrogen, and they are very earnest. They really want decarbonization. But they are betting on the wrong thing," said Paul Martin, a private consultant of Spitfire Research Inc. in Toronto, Canada.

In the light of demanding conditions for storage and lack of efficiency, automotive companies have furloughed and replaced sales strategy with electric vehicles using the lithium-ion battery for light passenger's cars to preemptively cut costs. The fear of whether hydrogen is realistic in massive production could snowball into more layoffs as electric vehicles gradually dominate the current auto industry.

The sales growth profile is therefore lopsided for most auto companies. According to Businesswire, compared to around five million electric vehicles on the roads, hydrogen fuel cell vehicles had only achieved around 27,500 by 2020 when the Asia Pacific was the largest region in the hydrogen fuel cell market.

On the opposite side, China’s largest maker of sport-utility vehicles, Great Wall Motor, pumps the brakes on rampant speculation by launching hydrogen SUVs and heavy trucks on August 23, 2021. Its subsidiary, FTXT Energy Technology Co., Ltd, has successfully delivered a fleet of 100 hydrogen heavy trucks weighing 49 tons for the Xiong’an New Area construction project in Hebei Province, China, according to FuelCellWorks. This action is only much-needed evidence that China is pushing the hydrogen economy to heavy transportation and taking the winnings of electric vehicles off the table.

Despite auto companies scoffing at hydrogen fuel cell vehicles, GWM boasts the best sunlight and plans to increase hydrogen heavy trucks to more than 1,000 in the next five years. Equipped with high-powered 111kW hydrogen fuel cell engines, these heavy trucks are locally sourced from productions and plummeted costs by 28%. There are already ten service refuel stations along the 50km road to the Xiong'an New Area to expand the transportation network, marking a momentous milestone in China's development of green transportation.

On par with an unwavering goal, GWM released its plans to launch the first fuel cell passenger's car at the 2022 Beijing Winter Olympics and the next-generation hydrogen mainstream models by 2025. On March 29, 2021, the Chairman of GWM's FTXT, Zhang Tianyu, stated that the company is striving to become the top three in the global hydrogen market share by 2025.

Pedro Bentancourt, director of government relations at the Great Wall Motor's Brazil Subsidiary, revealed that GWM is the first Chinese company admitted to members of the International Committee for Hydrogen Development. As a company, GWM already has powertrains in hydrogen that can apply to regular SUVs and is actively producing hydrogen equipment.

He reckons the current challenges of obtaining green hydrogen, which is normally produced by solar, wind energy, or water electrolysis that heavily rely on environmental conditions. To resolve these challenges, Bentancourt revealed a company's plan of developing solid oxide fuel cells by working with local institutions in Brazil. The technology is currently under development defined by a process extracting ethanol from sugarcanes or other materials.

"The molecule of ethanol is very rich in hydrogen and there is a large distribution of ethanol across the country in Brazil. It is not complicated to input ethanol into vehicles," said Bentancourt.

By using ethanol, the company could solve three significant issues in hydrogen applications: storage, availability, and expense. To make ethanol usable as a source of hydrogen, it must be mixed with 50% of water. Bentancourt also explained that the mechanism of fuel cells extracts hydrogen and generates energy similar to water electrolysis. In this way, the company can design a way to accumulate these energies into a small battery used for electric vehicles.

When asked about future goals, Bentancourt said that "The company is committed to going further in green hydrogen. I think that one of the most efficient systems could be ways to extract hydrogen from rich-hydrogen products, such as ethanol, in the future."

While challenges remain, the hydrogen economy has started with a wobble and faces mounting criticism across the world. The Great Wall Motor, driven by China's national goal of achieving carbon neutrality by 2060, has aligned with a majority of hydrogen enthusiasts to advocate zero-emission transport. As a company spending years on hydrogen development in the transport sector, GWM has signaled its persistence of progressing to the greener future. To summarize, whether the company will be a breaking point of hydrogen downbeats still awaits future development and market response.