Just twenty years ago, the Chinese diaspora dodged a question about whether a foreign land can satisfy their tasting buds with authentic Chinese food, a culinary interpretation of their home culture. Today, dozens of Chinese food delivery platforms have emerged in response to the demand of millions of Chinese descents who wish to re-experience authentic cuisine that previously existed only in their memories. 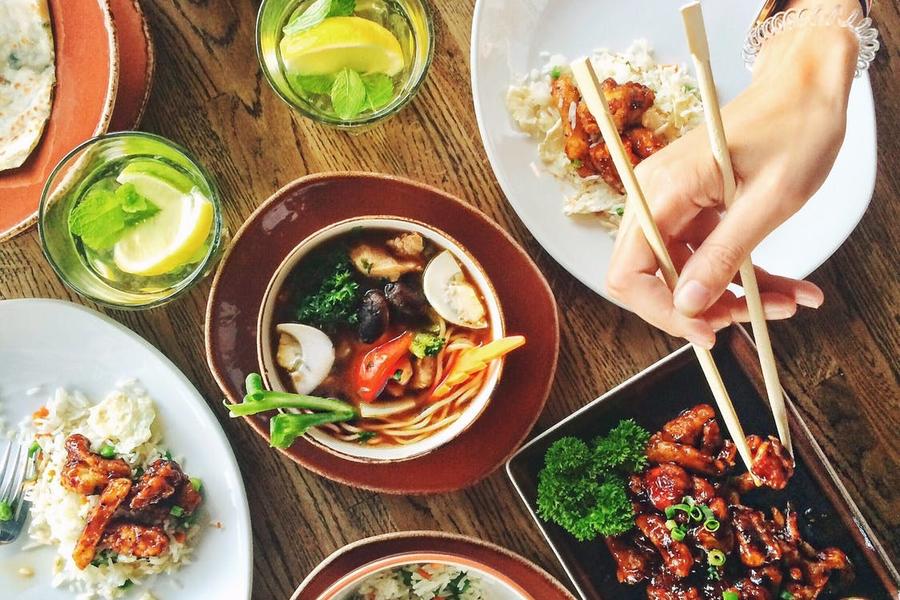 Over the past decade, app delivery services have sprung up along with growing numbers of Chinese immigrants who have not dampened their consumption sentiments seeking authentic Chinese cuisine. Americanized Chinese food, like General Tso chicken and fortune cookies, packed in plastic bento boxes is no longer palatable and is hard-pressed to build tastebud bridges to a homeland they left behind.

Between 2000 and2019, according to the Pew Research Center, the Chinese population has increased by approximately 88.4% to almost 5.4 million. Among foreign-born Chinese immigrants, two-thirds have lived in the U.S. for over ten years, with a majority of whom went into the lucrative food businesses in the U.S. as first-generation immigrants.

Opening a restaurant was once a pipe dream for early-stage low-skilled Chinese immigrants. The first wave of cash-strapped Chinese immigrants came to the states during the Gold Rush in 1849. Their mass gathering led to the incubation of Chinatown, a village complex that is reminiscent of Chinese traditions.

Today, there are more than 50 Chinatowns spread across the U.S. with countless on-site Chinese restaurants. Referring to TIME, the Chinese American Restaurant Association indicated that over 45,000 Chinese restaurants are currently in operation across the United States. This number is greater than all the McDonald’s, KFCs, Pizza Huts, Taco Bells, and Wendy’s combined.

With numerous brick-and-mortar food retails, the U.S. Chinese population has not forgotten to catch up with the omnipresent billion-dollar e-commerce industry trend in their motherland, the third-party food delivery service.

Similar to the astronomical growth of food delivery apps in China, many global Asian-centric food-and-grocery service providers are making splashy debuts with frantic fundraising in recent years. By replicating the best practices from China’s e-commerce behemoths like Meituan and Alibaba, a few companies, including HungryPanda and Fantuan, are crowned by securing astonishing fundings worth up to millions of dollars.

In the U.S., the online food delivery market has witnessed stellar growth in recent years as increasing consumers have chosen third-party platforms. It is expected that around 84.6 million consumers will lean on this option by 2022. 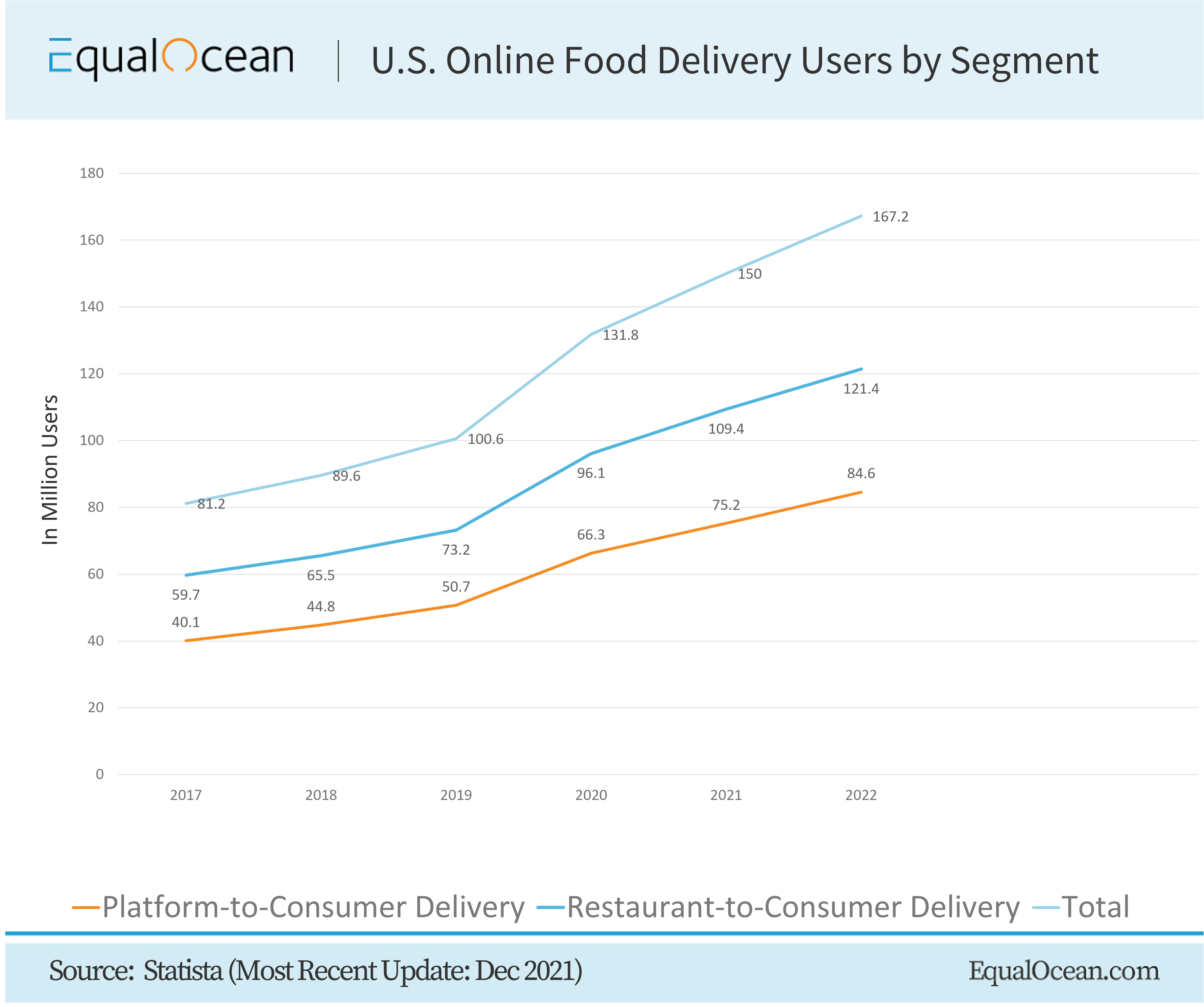 Compared to big sharks of the largest American delivery franchises, such as Grubhub and Uber Eats, it is expected to have a constellation of smaller platforms in Chinese food delivery tailoring themselves to authentic food. These platforms have a unique undertaking of strategy by scoping out community-oriented services and targeting the overseas Chinese market.

As the biggest winner, founded in 2017, the London-based Chinese food delivery firm, HungryPanda, has raised USD 220 million cumulatively in the last three years to fund operations in more than 60 cities and 10 countries. The company has carved out a niche in the Chinese food delivery market in the U.S., by attracting global investors, including 83North and Felix Capital, in financing a USD 130 million Series D round.

To craft a bilingual interface app design in both English and Chinese, HungryPanda has prioritized the local Chinese market with people upholding the traditional culture and experiencing language barriers. This is one of the largest competitive advantages compared to other ride-hailing U.S. food delivery giants, such as Uber Eats.

Kitty Lu, director of public affairs at HungryPanda, said that “we actually bring authentic Asian products to your dinner table. Especially for Asian people, when you desire a hometown dish, that is something you can’t buy. There is no substitute, but it comes with services we provide.”

To ensure authenticity in Chinese food, the company has categorized the most well-known Chinese cuisine from various regions in China. Commonly, many traditional Chinese food restaurants are operated by owners who could not speak English fluently, reflecting on the early immigration pattern. In this case, HungryPanda would send representatives to communicate in their home language and coach them on how to launch digitalized services on the delivery platform.

“We actually build the bridge to spread the Chinese culture to the general public, and also in a way of helping them to digitalize Chinese food businesses,” said Lu.

According to HungryPanda, the American food delivery market witnessed an increase of 600% while New York occupied 40% of total orders for Chinese food in 2020. On April 23, 2021, the company has seized the opportunity and established a partnership with iFresh Inc., an Asian American grocery supermarket chain, to launch an online perishable goods delivery service either through on-demand or scheduled delivery in New York.

“Our current focus is definitely on the North American market. That is the area where the company will invest the most,” said Lu.

Riding on this ever-expanding industry, Lu revealed that the company has launched PandaFresh, a new grocery service delivering fresh vegetables built on HungryPanda’s own warehouse in different cities.

“In 2022, we are trying to expand our services from food delivery to lifestyle services. We have our own warehouses and have launched Voucher Panda to provide offline and online discounts,” Lu announced new bells and whistles like new practices replicated from China’s largest delivery platform Meituan.

Fantuan: Algorithms of User Behavior Pave the Way to Our Success

Founded in 2014, the Canadian company Fantuan is one of the largest Asian food delivery service providers across North America. Amid the ongoing COVID-19 pandemic, the company’s business performance has soared, with the company successfully completing the third funding round, totaled raising up to USD 50.1 million.

Choosing a variety of Chinese regional cuisines makes Fantuan a game-changer in food delivery competition with mainstream U.S. players. Similar to its direct competitors, such as HungryPanda, Fantuan is a community-oriented food delivery platform that promotes cross-cultural communication with local Asian restaurants whose owners encounter language and cultural barriers in the U.S.

“Our customers are more like the Eastern style, with a combination of international students. Their user behaviors are different from the western population,” said Yaofei Feng, the cofounder of Fantuan.

In terms of the expansion plan, Feng commented that there are many similarities between Canada and the United States in which the market has a greater potential. To begin with, Fantuan has a strategy targeting the international student population. Over time, Feng said that the company has witnessed an increased number of family users using the delivery services emerging from the student population, as the company gains more loyal customers.

Covering over 40 cities across North America, Fantuan has currently launched its services in 15 cities in Canada and 25 cities in the U.S. The company first placed its footprint in Seattle back in March 2019. In September of the same year, the company subsequently expanded its services to Los Angeles and New York where there are large Chinese populations.

“In the U.S., we are trying to launch our services in several college towns this year. We will run our business in Pittsburgh as an example,” said Feng.

Due to the nature of food delivery focusing on localization, the company carries local teams that manage local restaurants and offer specific training to couriers. In terms of customer services, the company has a team to provide necessary support located in Tianjin, China.

“Not only North America but also do we see opportunities in countries that have immigration patterns, such as Australia, the UK or other European Countries,” said Feng.

Feng indicated that Fantuan is currently working on the next funding round to gain support in expanding its service with more information awaiting to be disclosed in the future.

The burgeoning Chinese food delivery services is a piping hot sector that is attracting millions of dollars across North America. The surge of third-party delivery platforms is driving the expansion demand of Asian-centric food delivery services in the U.S., which could translate to spillover benefits for the cross-cultural food industry. The source of inspiration seems to be the craving for authentic hometown food of millions of Chinese descents in the U.S., and it has put the spotlight on the app delivery market.

CONTACT US
Scan QR code to contact us for professional consulting services
Next article
What's behind half of the world’s EV market?