The producer of long-acting growth hormone acupunctures, vaccines and other drugs, looks set to offset the effects of so-called “centralized procurement” on its product prices with more aggressive expansion into private hospitals. So far, its monopoly appears unshakable, but with more competitors upping the stakes, how long will it last? 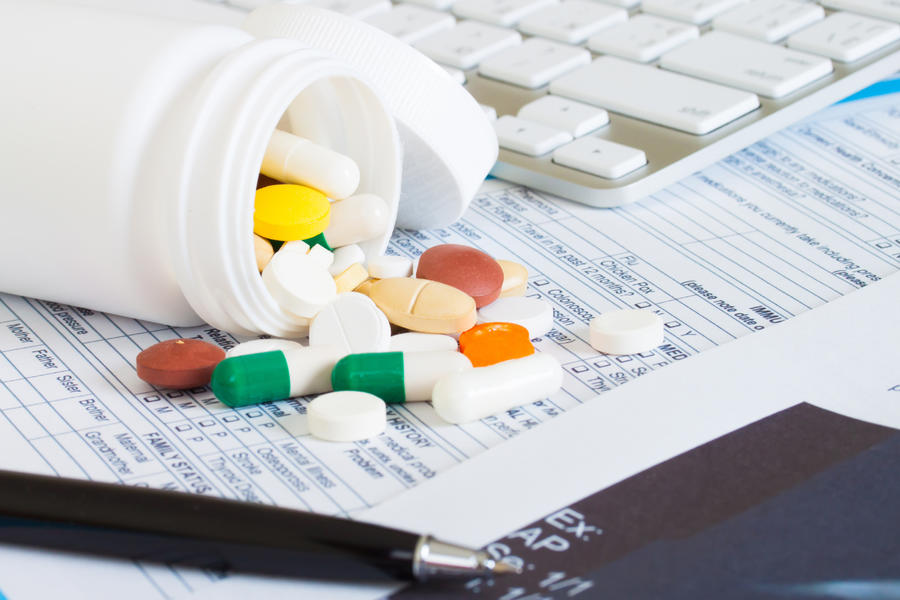 Changchun High-tech Industry Group (CCHT)is an enterprise with a significant position in China's domestic biopharmaceutical industry. The group has now defined its biopharma as the linchpin of its corporate strategy and real estate as a supplement.

It has already set up three major development platforms, including genetic engineering, biological vaccines, and medicines. They are governed by GeneScience Pharmaceutical, Changchun BCHT Biotechnology, and Huakang Pharmaceutical, respectively, and the above three companies are all subsidiaries of CCHT.

The company's core product is the human growth hormone (HGH), primarily used to treat people who suffer from growth hormone deficiency (GHD), also known as dwarfism. Despite the high demand for HGH treatment on short stature children in China, the penetration rate remains low. Apart from that, the use of HGH in China is mainly for children at present, but in overseas markets, its application among adults is higher than among children. Therefore, there is still considerable potential for the growth hormone market in China.

Changchun BCHT is dedicated to developing vaccine products. In June 2021, the company was successfully spun off and listed on China's A-share market. After the divestment, CCHT held 41.54% of the BCHT shares, a decrease of approximately 4.61%, and BCHT received abundant funds to facilitate advances on R&D after it went public.

The company's existing product pipelines are diverse, with several vaccines being in use for years. To name but a few, the company's live attenuated varicella vaccine has been widely recognized by the market; the nasal spray live attenuated influenza vaccine was approved for marketing in 2020 and is expected to increase in production rapidly; the rabies vaccine for human use is set to resume production shortly after technical upgrades. Furthermore, the live zoster vaccine is scheduled to be released this year, which could fill the void of homemade vaccine in this area and enhance domestic substitution.

The main products of Huakang Pharmaceutical are cardiovascular and cerebrovascular drugs and thrombosis medication including Xueshuan Xinmaining and Yinhua Miyanling tablets, which have the effect of dissolving blood clots that could clog arteries. The company has been growing steadily from 2012 to 2017. In 2018, both revenue and net profit declined slightly, mainly due to stricter cost control in the pharmaceutical industry. In 2019, the company reported a net profit of 42 million, a year-on-year jump of 31.25%, on a revenue of CNY 580 million, a year-on-year increase of 10.00%. Both revenue and net profit rebounded slightly. 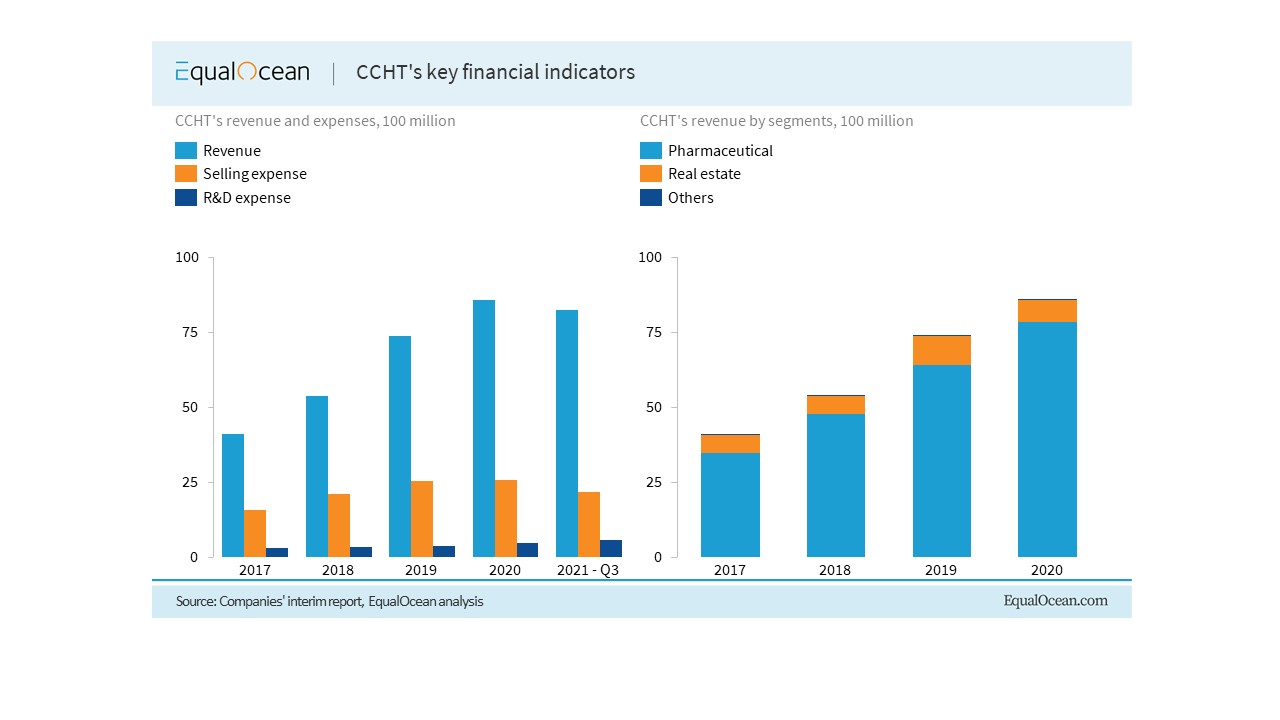 This article will mainly focus on GeneScience's HGH products, competitive landscape, and risks.

GeneScience is responsible for genetic engineering. In the first three quarters of 2021, the company's revenue reached CNY 6.16 billion, with a year-on-year increase of 45%. Furthermore, the company experienced a 40.69% CAGR in revenue between 2017 and 2020. GeneScience lowers its sales expenses and boosts its profit margins as the business grows. According to data released by the Chinese Medical Association, more than 7.6 million children nationwide suffer from this condition, but less than 5% of them receive the HGH treatment in China, indicating the potential of this niche market.

Besides helping children grow taller, HGH can also regulate metabolism among adults to affect muscle and bone growth, protect patients with muscular dystrophy from muscle wasting, and rebuild tissues for people with severe burn injuries. With these multiple applications, the HGH market is expected to keep expanding, while local companies look to broaden the HGH usages. 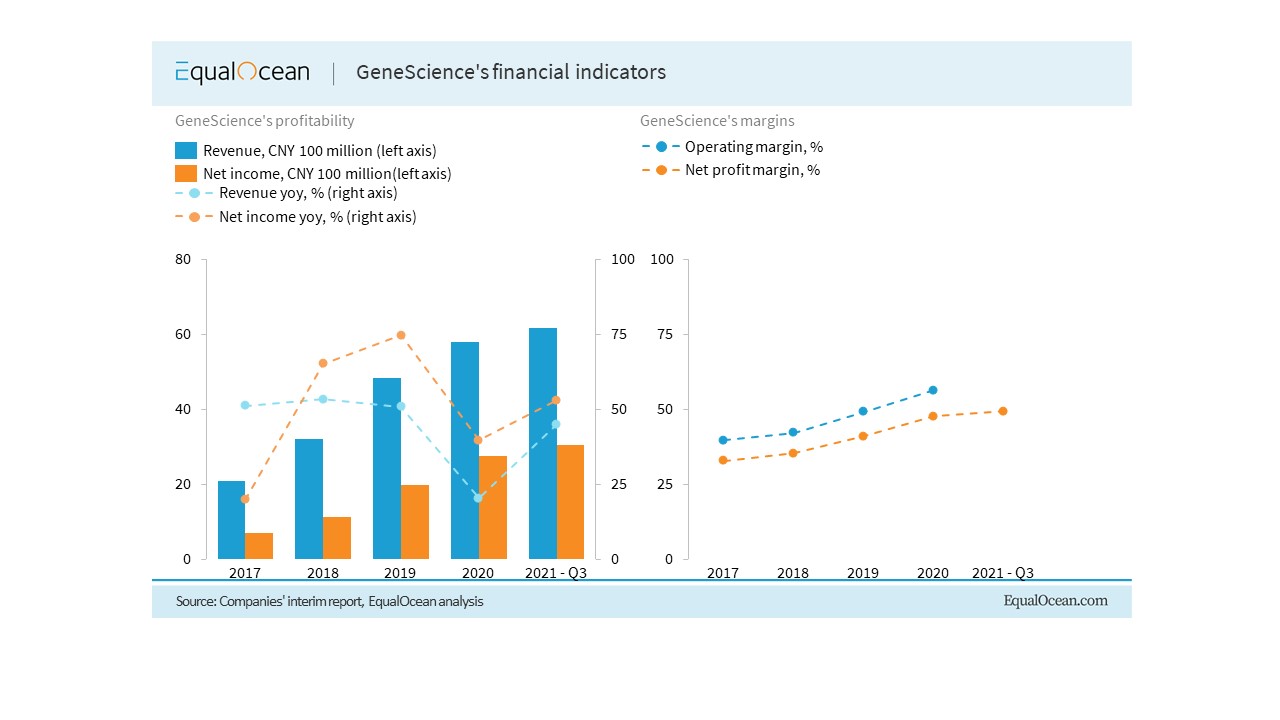 GeneScience occupies a dominant position within this lucrative niche market compared to other domestic competitors. Along with the first-mover advantages, the company also obtains the complete dosage forms, with 10 different specifications and three types of hormonal injections. As the only company making the long-acting liquid acupuncture in China, GeneScience is expected to leverage the economies of scale to grab more market shares from rivals. Instead of one injection per day, the long-acting liquid acupuncture allows patients to receive a jab every seven days. This will make the treatment less of a burden and encourage the users to comply with doctors' instructions. If we look at the Chinese HGH market in 2020, GeneScience accounted for more than three-fourths of the market, and the top two companies, GeneScience and Anke, took around 93% of sales. 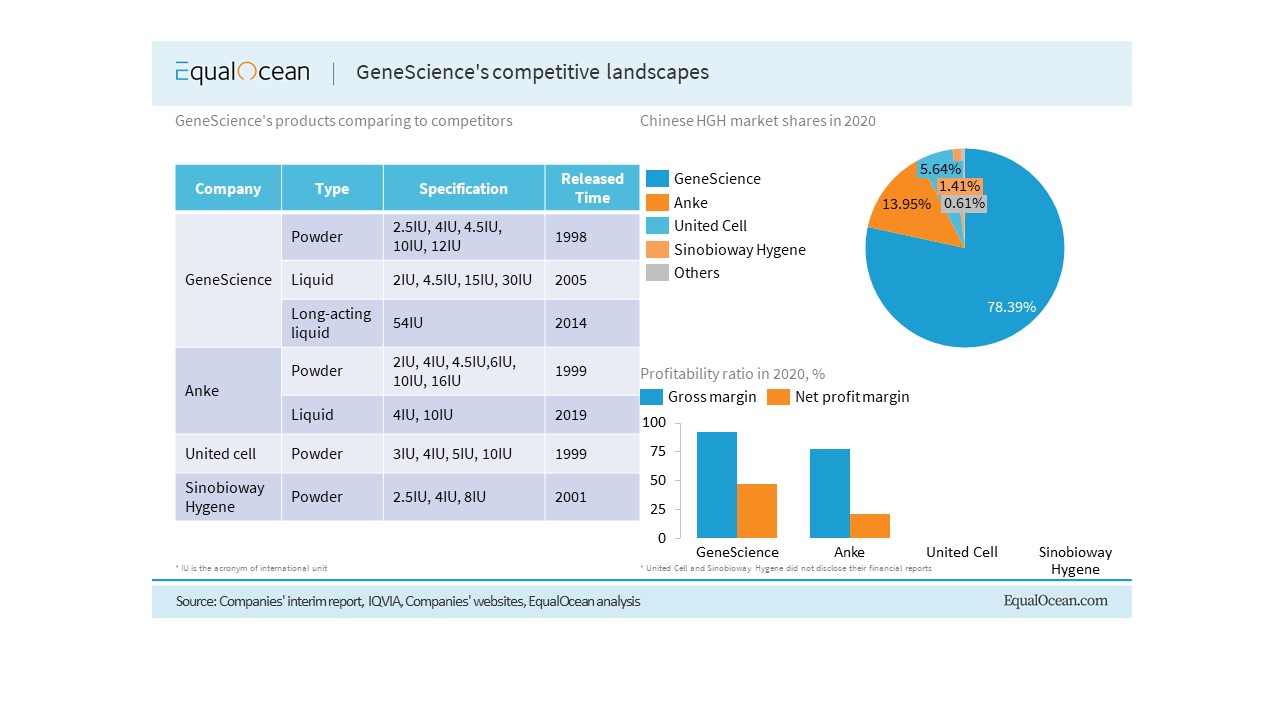 On January 19, 2022, an 11-province buyers'  alliance led by the Guangdong Medical Insurance Bureau issued a centralized procurement document. Centralized procurement refers to the purchase in bulk by healthcare insurance authorities of generic drugs and high-value consumables (standardized, large in volume, and fiercely competitive) so as to cut their prices. Healthcare expenditure accounts for 7.12% of China's GDP on average. Reducing drug prices and alleviating people's medical expenditures are highly consistent with the principle of common prosperity. The centralized procurement thus is also a classic example of the government's efforts to guide the development of the industry, in addition to conventional tools such as financial and fiscal policies in its regulatory toolkit.

However, based on information released by CCHT, less than 30% of HGH was sold through public hospitals, while more than 70% of the revenue came from collaborative private medical institutions. The company also said it expects to further expand sales in private hospitals. Therefore, centralized procurement can only have a limited impact on its revenue.

Furthermore, the proportion of GeneScience's products among items listed in the latest centralized procurement is relatively small, estimated to be worth around CNY 117 million. This pales in comparison to its revenue of CNY 5.8 billion in 2020. As a result, centralized procurement will likely have a scant, if any, impact on short-term performance.

Risks to the company's long-term operation include:

-          Product risks: Company's revenue heavily relies on HGH products. The company should diversify its products or expand their applications to hedge against potential dangers of over-reliance on a single product. Besides the existing products, the progress of current R&D efforts might not be fast enough to meet the market's expectations and could hinder profitability as a result.

-          Regulation risks: China's ongoing policy shift in the medical industry poses certain risks to the company, or even leads to price reductions. For instance, the centralized procurement next time might include the long-acting acupuncture -- CCHT's financial lifeline -- in a considerably larger quantity. If so, the company's financial performance could take a drubbing. Furthermore, more aggressive policies could also be rolled out to cap product prices.

-          Risks of off-label usage: Since public hospitals have stricter rules on prescription drugs like HGH, GeneScience mainly focuses on private hospitals in distribution. But since the implementation of rules tends to be less stringent at these entities, widespread off-label usage could harm the company's image in the future and also cause side effects for patients.

-          Risks of fiercer competitions: As the market grows, more competitors will enter the fray, complicating the current competitive landscape. Anke's long-acting liquid acupuncture is currently in phase III clinical trial and could be released soon. This could erode CCHT's monopoly in the HGH market.