‘Life is like a box of chocolates that you will never know what you’re gonna get.’ Until recently, China’s burgeoning blind box industry was a fitting metaphor for this famous line from ‘Forest Gump.’ But the party looks poised to end with the authorities stepping in to discourage and even curb the consumption of blind box 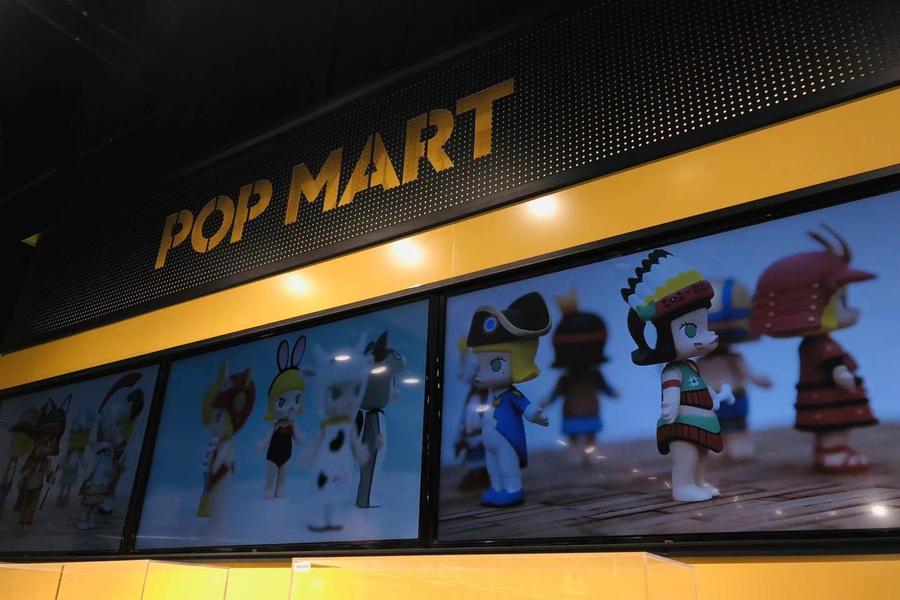 Blind box, which literally means a box with a random assortment of novelty items inside, has witnessed exponential growth over the past few years. Starting in 2019, the blind box industry is expected to soar by over 75% to CNY 30 billion (USD 4.7 billion) by 2024, making it a big draw in the art toy market.

Consumers, often driven by a certain gambling mentality, are keen to spend on blind boxes, which could deliver high levels of emotional or social satisfaction for a relatively low price. According to Tmall, China’s largest B2C online marketplace, about 200,000 post-95 consumers bought blind boxes from its platform in 2019, with each spending CNY 20,000 per year on average; some fanatics even shelled out CNY 1 million on this “game of chances” to get the coveted limited-edition toys.

This blind box mania is such that it even gave rise to a new buzzword - the blind box economy.

Amid a consumerist frenzy, on the primary market, the blind box economy has also become a darling of venture capitalists. More than 50 art toy brands received financing in 2021 from big-name investors including Alibaba (BABA:NYSE), Tencent (0700:HK), JD.com (JD:NASDAQ), Sequoia China and a slew of other top institutional venture funds.

A bunch of art toy brands has received a fair share of attention for their roles in helping to fulfil people’s gambling psychology and emotional value. They include IP Station, ToyCity, Xinghui Creations, IPSTAR, Alpha Group (002292:SZ), 52Toys, to name but a few, and Pop Mart is one of the best examples and the face of the industry.

In December 2020, this 10-year-old company was listed under the stock code 9992 on the Hong Kong Stock Exchange, making it the first blind box stock. Its share price rose over 100% on the first day of trading, with the market cap once crossing the HKD 100 billion mark. Previously, the company had received eight rounds of investments; Loyal Valley Capital and China Renaissance (6RN:FRA) were two strategic investors disclosed for the latest funding rounds.

The company’s satisfying financial and operating performance is the main reason it has won the favor of venture capitalists.

It is the fastest-growing art toy brand in China in terms of retail value, according to a report from Frost & Sullivan, a research firm hired by Pop Mart to draft its IPO prospectus. As of June 30, 2021, Pop Mart had 11.42 million registered members cumulatively, who contributed 91.8% of the company's sales with a 49% repurchase rate; in other words, half of the members will make a second purchase.

Pop Mart’s revenue has also expanded by leaps and bounds since 2017, with growth rates of over 220% in the first two years. In 2019, blind box became a best-selling item during China's biggest online shopping festival, Double 11, which was equivalent to Black Friday in the US. The Molly series, one of its top sellers, generated CNY 456 million in revenue for Pop Mart. In the same year, the company's gross margin reached its highest point since its inception, at 64.8%. It was also the year when, spurred by the rosy prospects, many art toy brands flocked to this segment and the competition further increased, leading to Pop Mart's revenue growth rate plummeting to 49%; this figure was 226.8% a year ago.

One of its core competitiveness is the intellectual property. As of 1H20, the company operates 93 IPs, including 12 proprietary, 25 exclusive licensed and 56 non-exclusive licensed ones. According to its interim report of 2021, revenue from those propriety products contributed 89.3% of the total revenue, which represented an increase of 130.4% from CNY 686.9 million in H1 2020 to CNY 1,582.4 million in H1 2021. With its leading market position, Pop Mart continues to attract high-quality IP resources, increasing the revenue from propriety IPs by 220.7% over the reporting period. 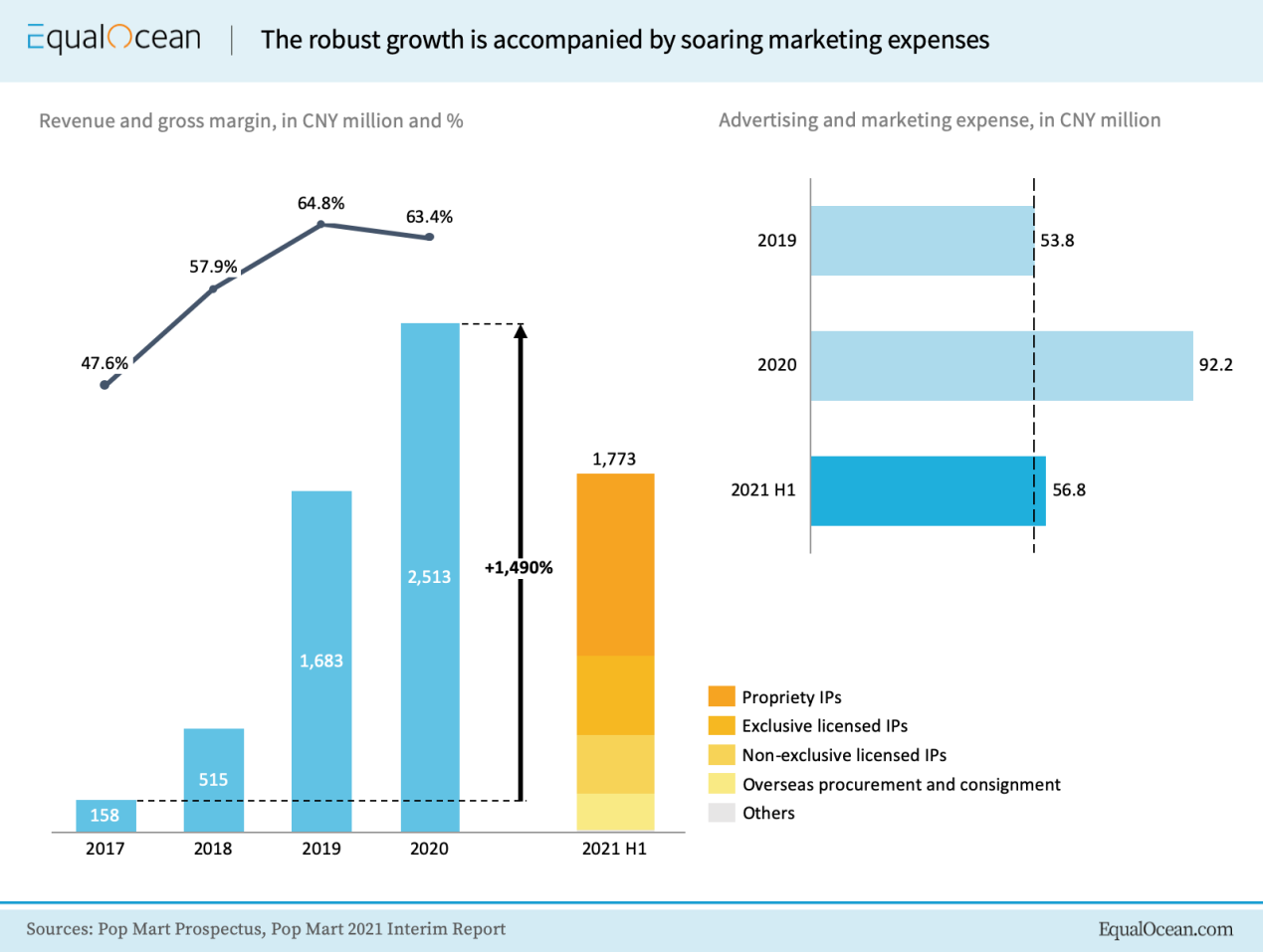 However, this remarkable achievement came at the expense of accelerating advertising and marketing expenditure. According to the prospectus, Pop Mart reported a CNY 92,2 million advertising and marketing outlay in 2020, up 71% from a year before; and this figure for the first half of 2021 surpassed the whole year’s spending for 2019. We are looking forward to its yearly performance announcement to see if the H2 results would further deepen this trend.

How long would the craze last?

In January 2022, Shanghai released a guideline to regulate the blind box market, banning the sale of blind box products to children aged under eight and limiting the price of each box to under CNY 200 (USD 30).

"The blind box is to serve mainly entertaining purposes, while an unreasonably high price would deviate from its original entertainment attribute," Wu Yandong, deputy director of the Competition Department of the Shanghai Municipal Administration for Market Regulation, was quoted as saying.

This regulation is the first of its kind to be issued at a municipal or provincial level, which aims to safeguard consumer rights and promote the healthy development of the industry.

Two months later, a top Chinese lawmaker proposed at the annual meeting of the National People’s Congress that authorities should ramp up efforts to tighten its supervision of the red-hot but problematic blind box market.

The annual consumer rights TV show "315," aired by China's state broadcaster China Central Television (CCTV) about two weeks ago, also cast the blind box industry in a negative light. It explicitly named and shamed the promotional campaign KFC x Dimoo launched jointly by the fast-food giant KFC and Pop Mart, for causing irrational, excessive purchases of food and leading to wanton waste. The quality of blind box products has been criticized too in the CCTV coverage.

Fears have further intensified of a possible crackdown by the Chinese government on the company gone awry, dragging Pop Mart shares down 32.2% from HKD 47.00 on the first trading day of 2022. As of press time, its stock price closed at HKD 31.90 with a market capitalization of HKD 43.88 billion.

The increased regulatory scrutiny will no doubt end the “Wild West” era of the blind box industry, while in the long run, this is a necessary step towards the formation of a benign business environment. Therefore, we don’t expect Pop Mart to be much affected by the changing regulatory climate, as it is more than just a blind box maker; instead, given the Matthew effect, the viability of smaller companies will be further compressed.

CONTACT US
Scan QR code to contact us for professional consulting services
Next article
Turning Green: ESG Practices with the Corporate Conscience