Many stay-at-home city workers in China have not expected that one day, they will mimic the 80s housewives to grow vegetables at home. Apparently, even young people have divulged their plans to build balcony gardens amidst the fierce COVID-19 lockdown in recent months. Food insecurity has an outsized impact on encouraging the young generation to think of new ways that adhere to their modern lifestyles. 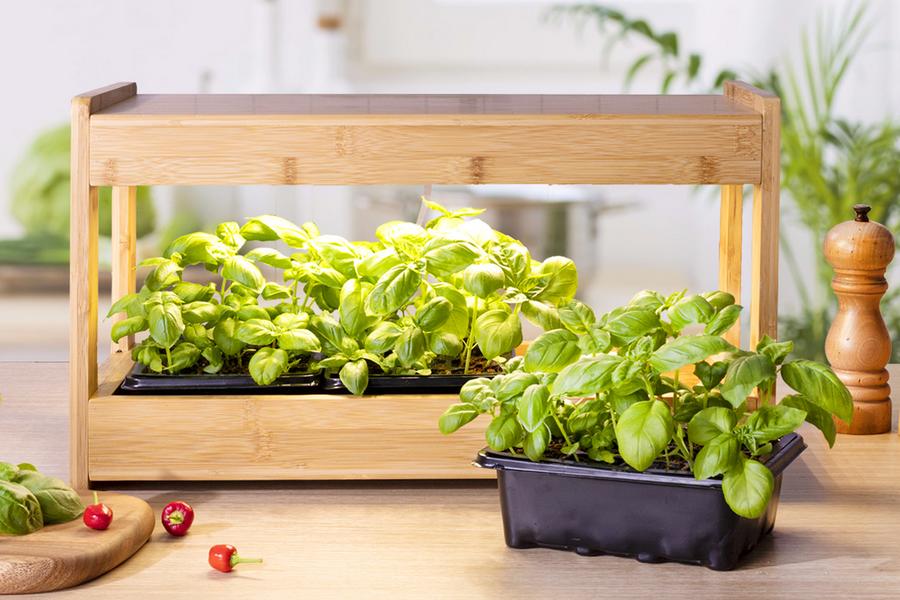 A Strong Overtake of COVID-19 Lockdown

The media catnip of balcony gardens appears lucrative to workers in China during the sensitive period recently. What drives them to delve into this semi-farmer lifestyle is because of the food supply shortage and delivery difficulties when China enforced lockdowns in multiple major cities, such as China's financial and commercial hub Shanghai.

In addition, the historical urban migration in China further escalates the food supply crisis as younger people constantly moved to major cities for better employment opportunities and living conditions. MyCOS's Blue Book of Employment 2021 reported that among every 10 recent college graduates, 6 of them would choose their first job locations in first-tier cities, including Beijing, Shanghai, Shenzhen, and others. 68% of them migrated from other parts of the country, lifting the urban population in the past decade from around 670 million to 902 million.

On March 28, 2022, China rolled out its biggest COVID-19 lockdown in Shanghai that confines around 26 million residents to their homes in order to battle the worst virus outbreak in these two years. The lockdown enforcement was extended indefinitely on April 1 which leaves residents constrained in their food supply and daily activities. As reported on April 10, there were over 26,000 new daily infections, causing an imminent interruption in food and delivery infrastructure.

Although food retailers, such as Metro AG in Shanghai, soon launched the online catering order to balance the overwhelming demand, the whole delivery and logistics process takes considerable time to cover all residents at once. To overcome this unprecedented food supply shortage, city workers in Shanghai stepped up their own efforts to extend the sway of balcony gardens. A growing chorus of community-based households has started to go on the hunt for intelligent ways of planting vegetables at home.

Since the lockdown has a ripple effect restricting daily activities, owned by Alibaba, China's largest e-commerce marketplace Taobao akin to Amazon, has witnessed rocketing sales in the product categories of intelligent hydroponic system indoor planters and vegetable seeds. The planter appears similar to a life-dimension greenhouse and equips with scientific irrigation and plant lighting features to adopt an easy hands-on approach to grow vegetables.

Deviated from traditional clay planters, this new indoor planter is designed for soilless procedures through hydroponics or substrate cultivations. With the use of LED lighting and water circulation systems, this type of planter can readily replicate the natural environment of sunlight, air, water, and nutrients needed to generate photosynthesis and supplement plant growth. Some indoor planters even come with remote control functions as connected to the WIFI and managed to replenish vegetables through the nutrient sprinkler and light exposure time control on a regular basis if the owner takes an absence.

As reported by Taobao this year, the smart indoor planter achieved a 200% of year-on-year sales growth. Meanwhile, in the first quarter of 2022, the revenue of all sorts of vegetable seeds on Taobao and Tmall experienced a skyrocketing performance on a yearly basis, with doubled number of vegetable seed buyers for the consecutive three years. Demographically speaking, the main consumer groups are concentrated in Beijing, Shanghai, Hangzhou, and other first- and second-tier cities. 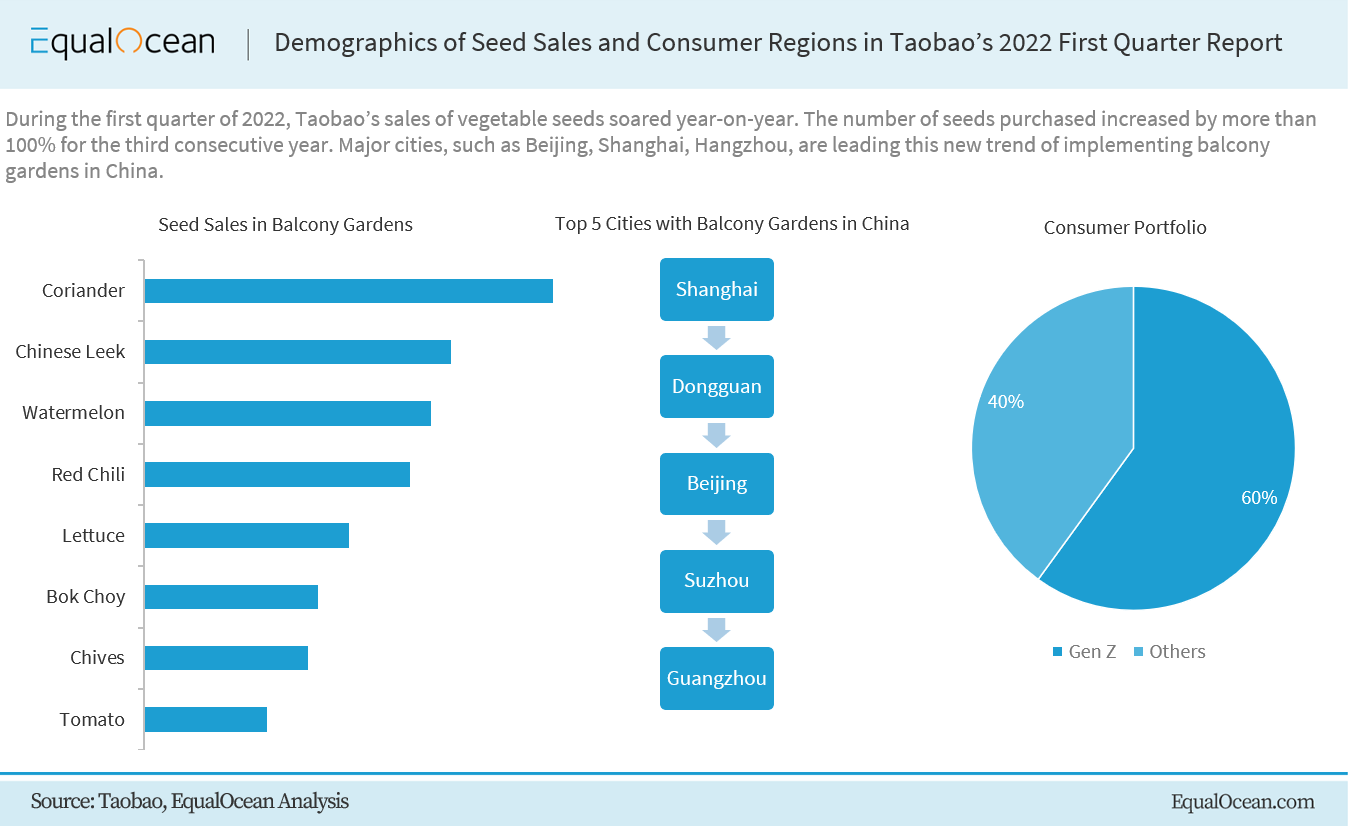 One of the top merchants selling indoor planters in Taobao, Tianjin Xiaojing flagship store, has also doubled the sales volume in March compared to the same period of last year. Before this viral trend, the store disclosed that its main business primarily focused on green plants and flower potted plants while accumulating over 200,000 followers. In March, they launched a large indoor smart vegetable planter with a price ranging from CNY 1199 to CNY 1799 and achieved a monthly sales of nearly 40 units.

The store owner Lin Xiaoqin said that the sales performance of this product was much better than they expected as the company prepared for the launch of large smart indoor planters last year. Besides, the store also provides a mini indoor hydroponic planter at a cheaper price of around CNY 300, and this model achieved over 200 units of monthly sales volume from orders in Guangdong, Beijing, and Shanghai.

Besides hydroponic indoor planters, vegetable seed buyers in China are also turning their balconies into fashionable gardens during the new COVID-19 flare-ups. According to the balcony planting report by Taobao, Gen Zs become the main consumer group in growing their own vegetables at home. Vegetable seeds like coriander, watermelon, lettuce, green onion, and tomato, were among the top 10 in terms of overall seed sales on both Taobao and Tmall platforms.

From vegetable seeds to hydroponic planters, Gen Zs and city workers in China is transforming their balconies or home into lush garden, even with a tiny patio space during the COVID-19 lockdown. Amidst ongoing food insecurity and stress, China's e-commerce giants like Taobao and Tmall quickly input similar strategies of selling tools to help with the installation of balcony gardens, including self-watering and self-fertilizing hydroponic planters. This new online retail trend reflects another product with a high growth potential in China's market driven by the young generation.

CONTACT US
Scan QR code to contact us for professional consulting services
Next article
Big Players Dominate China’s ERP Market, but Local Upstarts are Catching up