Overall smartphone sales in China fell by 14% across brands since last year's Q1 according to Counterpoint Research. Globally, smartphone shipments fell year on year by 11% according to Canalys research. The economic environment is outright bad. For Huawei, profits have been slashed by more than half. For specifically Huawei and Apple, sales declined from the prior quarter. There’s many reasons for companies across the board to be struggling, from lockdowns to supply chain issues, recessionary pressures, or softening demand.

Within the dense major cities of China, the state has made an initiative to prevent the rapid spread of covid. The consequence is the shot in the face to industries that have already been bogged down by the worst initial waves of the past couple of years. Though there are clear indicators of a bogged market, there are also signs of optimism for some. Xiaomi’s global market share went down to 13% while Samsung’s went up to 24%. Apple was also able to increase up to 18%. Despite Xiaomi’s tick down, they remained top 3 in market share due to the success of their Redmi Note series as well as topping the Indian smartphone market for sales in Q1.

For Xiaomi specifically, an additional punch down in share price came from accusations of “illegal outward remittances” from India’s Enforcement Directorate. Though Xiaomi India pledged, on Twitter, to “closely with government authorities to clarify any misunderstandings,” shares sustained losses of 4.4% by the end of the day on the Hong Kong exchange. Clearly, damage to a strong market of theirs coupled with a loss in market share on the mainland resulted in an excuse to further decline stock price. Xiaomi has had generally lower profit margins and will likely face more challenges in an increasingly saturated market with intensified competition

Huawei had been feeling the brunt of US sanctions for some time now. Added pressures have positioned the company in a tough place. Q1 profit margin was down from 11.1% to 4.3%. Sales plummeted 64.2% from a year earlier too. Though in the same economic storm as their competitors, Huawei has clearly felt the brunt a bit more and it may continue into the second quarter. Huawei’s rotating chairman Ken Hu, said in a statement that, “we still face a challenging and complicated business environment,” and that their quarterly results were in line with the company’s expectations. To counter all of the turmoil in their smartphone operations, the company has been venturing into the EV industry. Hu has mentioned that at least two more car models using Huawei technology would be launched this year. The first car to use HarmonyOS was the Aito M5, which began deliveries earlier this year. Any rebound in their smartphone operations is yet to be seen.

Apple has proven their market dominance in standing the tallest despite market beatdowns. They have capitalized on Huawei’s decline especially in the premium end of the smartphone market. Evidence of their success is that although their quarter on quarter sales declined in China, their sales since last year’s Q1 have grown 4.4%. While Xiaomi has to fight for scraps in the Android market with the rising Oppo and Vivo brands, Apple is swallowing up any residual market share left available to them. All this despite having their own factories like the main Shenzhen facility briefly halting operations. According to the IDC, leading competitors all saw year over year growth decline except for Honor. Apple’s decline was the lowest at -5.8%. Being able to handle the tough times is a true testament of these companies' foundational strengths. Adjusting for seasonal spending patterns, Apple is showing resilience.

Despite their resilience, the mounting lockdowns on the mainland, along with other macroeconomic factors, Apple may begin to accelerate a pivot away from reliance on manufacturing in China. According to the South China Morning Post, Covid lockdowns along with the global chip shortage are set to reduce Apple’s revenue by up to USD 8 bn in the next quarter. The Chinese market itself caused “nearly half the worldwide decline, mainly due to seasonal weakness,” said analyst Toby Zhu on Forbes. Aside from “seasonal weakness” there are clearly other significant factors in China’s smartphone slump. For optimized value chain operations, Apple, like Xiaomi and others, may look to pivot to India or even Vietnam where labor costs are more competitive. 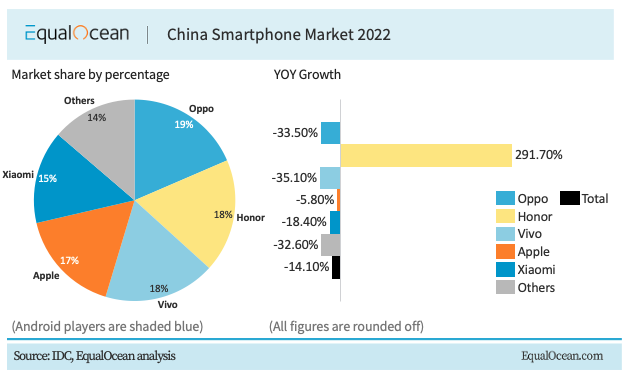 Executive director at Strategy Analytics Neil Mawston has forecasted a 20% year-on-year decline in the second quarter for smartphone shipments. Though due to seasonality, smartphones could pick up by early summer. However, if the lockdowns as well as other factors continue to weigh heavily on the market, the sales and consequential stock price declines could come down beyond the second quarter. Companies like Xiaomi and Huawei will likely continue to struggle while Apple seeks to maximize its advantages and diversify its supply chains. In their most recent conference call, company CEO Tim Cook said Apple was likely to move more production capacity back to the US considering the ongoing challenges. If there was any opportunity for companies to experiment with operating outside China, it is now while their facilities on the mainland are either shut down or disrupted. Though Apple has fallen from the top spot in China, they will likely still be a big player in Asia and globally. Investors should look to this well established American giant to weather the storm and actually come out of 2022 stronger to some degree.