Founded in 2016, Kandao is an award-winning VR technology company elevating the ultra-realistic 3D experience in the digital imaging category. As the first Chinese company to have won the CES Best of Innovation Award and Japan Good Design Best 100, the company is dropping a bomb of news recently. 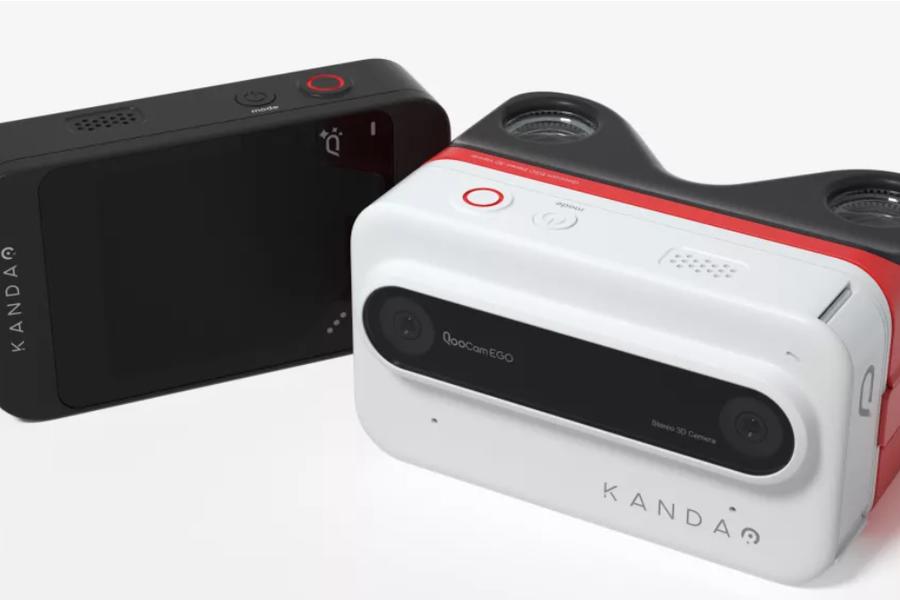 Have you been fascinated by the idea of immersing yourself in the environment through 3D images? From capturing family gatherings, and special celebrations, to group trips, Kandao has made this once futuristic fantasy a reality.

Coming with a detachable magnetic 3D viewer, Kandao QooCam EGO is a palm-sized VR camera with a fashionable outlook and color options in aurora white and midnight black. This product has a signature look to become a trendsetter among the young generation by also adopting the easy-to-use smartphone interface to situate the best user experience.

Integrating the traditional VR headset and camera, this product is similar to the Fujifilm FinePix Real 3D W series with an autostereoscopic display. The first W1 was launched in 2009, which was ten years ahead of the Kandao QooCam EGO. By conducting reflective design based on other pioneering models, Kandao made dedicated efforts to complete a true-to-life 3D camera.

"Combining a camera and viewer is not something new. But we found that the previous products come with low resolution. On the one hand, we hold those pioneers with high respect. On the other hand, we decided to implement the concept again and improve the features," said Dan Chen, the co-founder, and CEO of Kaodao.

This new product is an indispensable addition to spice up aesthetic digital images by enabling an immersive user experience. To simulate a real-life 3D experience, the QooCam EGO mimics human vision with its advanced stereoscopic camera module at 60 frames-per-second capture. To abandon the traditional bulky VR headset, the camera pairs with a small-sized viewer that records images with an astonishing 3840 X 1080 resolution and unprecedented clarity and immersion.

"It took us around 10 months from design to mass production. Although the camera is an easy pass, we tried several integrations for the optics and structures of the viewer because our initial design is way too large. Later, we reduced the size of the viewer based on reflective design," said Chen.

In addition to QooCam EGO series, Kandao has two other product lines in professional VR cameras and 360-degree video conference tools, Obsidian and Meeting. The company has accumulated years of expertise in making high-standard VR cameras, like the Obsidian series used for large national events, including the Tokyo Olympics and Beijing 2022 Winter Olympics.

Circling back to QooCam EGO, it is Kandao's first consumer-grade 3D camera released in 2022 that is engineered for prolonged use by replicating the interplanetary distance of human vision through the use of optical technology. An extensive viewing zone ensures a high comfort level for users to avoid potential dizziness and eye fatigue.

"So far, QooCam EGO has been launched worldwide, and the North American market is in our main basket. Our first batch of key opinion leaders is professional content creators in the VR sector. At this stage, we would like to expand our coverage to reach out to more consumers," said Chen.

Expanding from two to six axes, Kandao QooCam EGO is comprised of anti-shake features to ensure crisp and vital video footage, even with a single-hand shooting setting. The product is also equipped with its customized APP to allow users to take selfies with a remote shutter, producing an instant preview with the camera screen.

With a background in physics and engineering, Chen began his early career in the electronics industry in Shenzhen. As a photographic enthusiast since a very young age, he has been always yearning for a place where his dream of transferring virtual reality to a real-life came true. Kandao is his first startup transforming photography with computational power, to a 3D and holographic dimension.

"I think the boundary between the metaverse and the real world is becoming more and more blurry. Our mission is to link, transfer, and reconstruct the real world in the metaverse, or vice versa," said Chen, "Unlike well-known metaverse companies in the gaming industry, we are offering a unique and firsthand experience to users."

An interactive approach emerged when QooCam EGO introduced a MP4 format compatible with major 3D devices and platforms. The hallmark of a highly interactive and innovative product, Kandao QooCam EGO equips with a 3D playback function that allows users to use alternative VR devices, among a series of VR products. Other features, such as in-app 3D filter templates and stickers, allow users to flex their creativity from various impact angles.

As the world VR oligopoly takes shape, it is ordinary to have separate environments for demonstrating the visuals. In this sense, Kandao has shored up building the QooCam EGO community by offering a 3D chat room for users to share their vlogs and images online.

"In the future, we will continue to spend a lot of effort to establish the EGO-to-EGO sharing function for building our QooCam EGO community. Customers can easily share footage from our camera to their cloud system using hotspot and WIFI," explained Chen. He also mentioned that by generating a 4-digit sharing code, QooCam EGO can transfer footage and images to another device. All these stated functions will involve the video talkie, a virtual 3D chatroom for customers to exchange information and share ideas with each other.

Consistently making the top-of-the-range camera series, Kandao has proved its resilience and persistence in outperforming other VR device manufacturers. On the heels of futuristic VR development, the company will never cease to create a thrilling and cutting-edge way of capturing images and videos in a vivid new dimension.