African consumers used to shy away from ordering food online, citing a number of reasons such as a lack of user habits, relatively untapped market, underdeveloped digital payment and other infrastructure, among others, but the coronavirus pandemic has provided a shot in the arm for food delivery companies 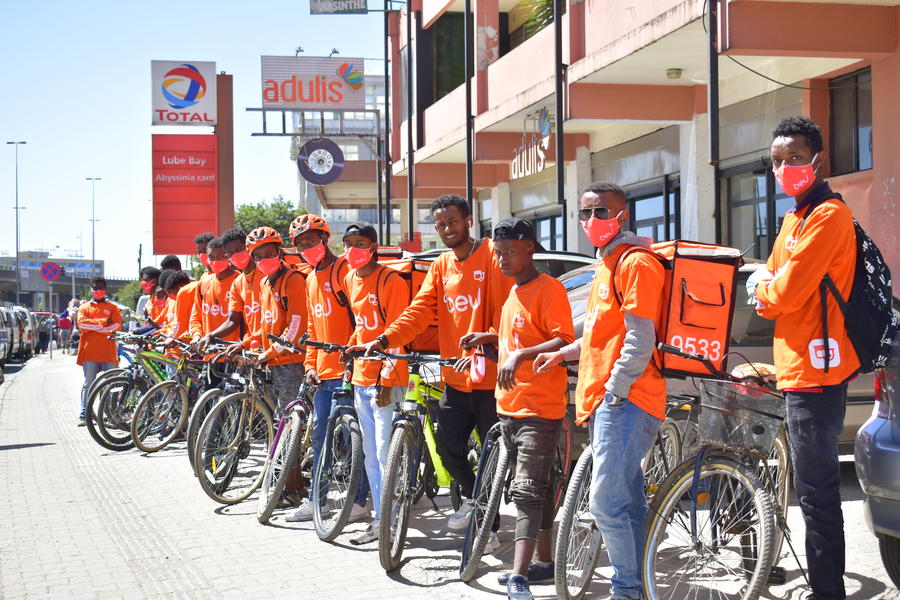 As people are cooped up in their homes, takeout platforms saw a spike in demand and began to thrive on the African continent. beU, a Chinese food delivery company, is one of a handful of firms to establish a foothold in Ethiopia, one of the fastest-expanding economies in Africa. Even better, it is now the largest player in the local food takeaway space. In this profile, we try to unpack how beU, a new entrant, ate the “lunch” of market incumbents like Deliver Addis or even titans like Uber Eats.

Food delivery has been a mature market in China, perhaps even a bit too competitive and saturated, as the two arch rivals Meituan and Ele.me slug it out over a prolonged period for market share and user stickiness. According to a research note by TF Securities, the revenue of food delivery in China rose to USD 121.43 billion in 2021 at a year-on-year growth of nearly 22%, with a penetration of 17% in the entire catering market.

As technologies evolve and lifestyles shift, largely thanks to the raging pandemic, consumer attitudes toward takeaway are changing rapidly in favor of the industry over the past few years. According to ARK invest, China is the market leader by far in meal delivery, accounting for 64% of global market. In other words, the global food delivery services was estimated at USD 189.73 billion in 2021. We further conservatively forecast the market size which could reach USD 459 billion by 2026, growing at a CAGR of 19.33% based on the calculation from United Nation’s estimated population data. 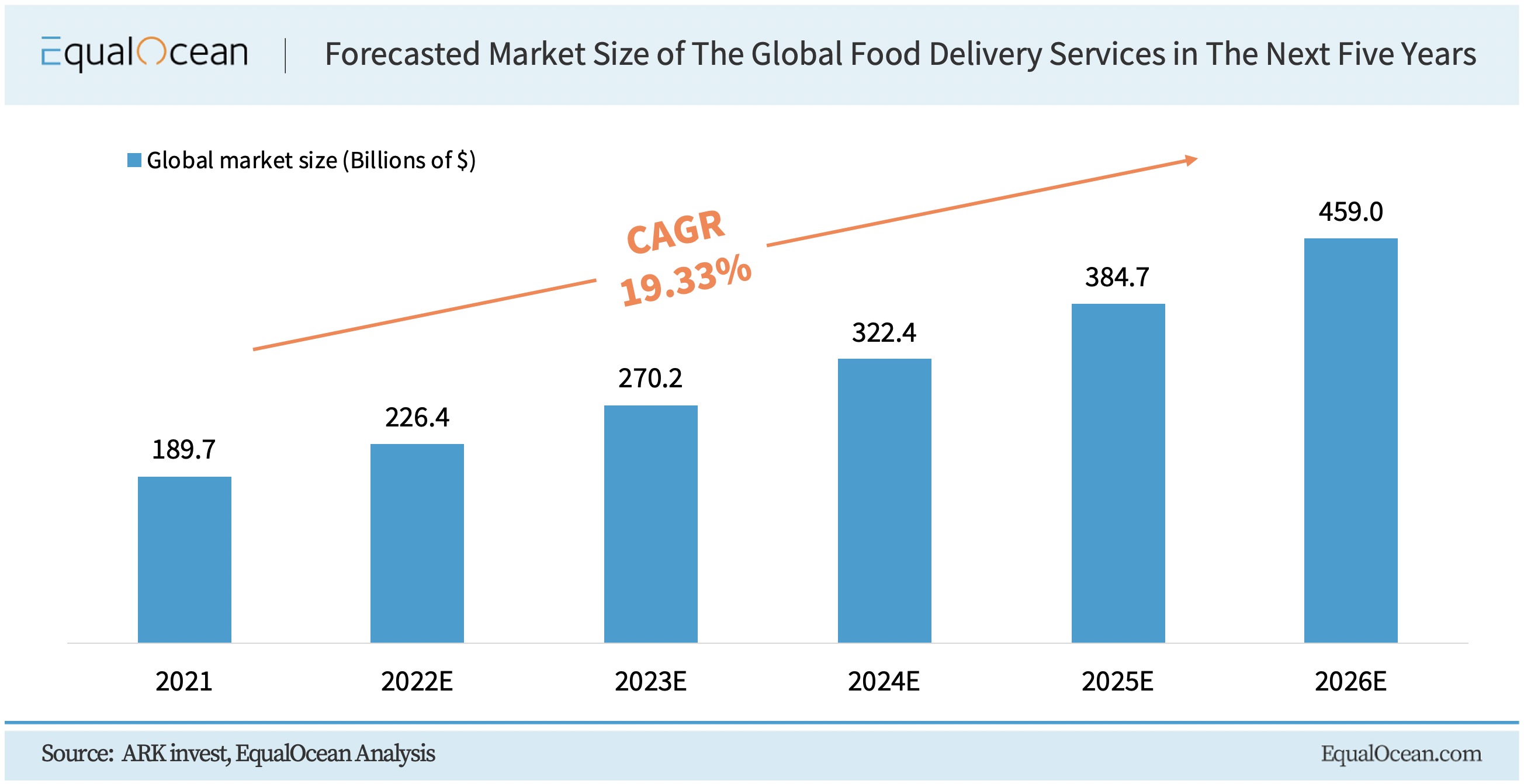 An epitome of the industry boom is that food delivery services, large and small, have sprung up across the world. Almost every major economy has several delivery giants, from Uber Eats in the US to Just Eat Takeaway in Europe, from Zomato in India to Grab in Southeast Asia.

Traditionally an industry dependent on so-called “demographic dividends” – a vast and young labor force to help keep wages low and a young consumer group willing to spend and embrace new experiences – the takeaway frenzy has swept across the world and could not have left Africa untouched. The continent has a fast-expanding and young population, with a median age of 19.7 years in 2020.

Africa thus provides fertile ground for food delivery companies to mushroom, but according to Peng Jie, press officer of takeaway platform beU, the current penetration of the industry in Africa is less than 0.1%.

“According to public information and estimates by African observers, the annual revenue of the food delivery industry in Africa could reach the equivalent of CNY 100 billion, with a projected daily gross transaction value (GTV) of CNY 1 billion,” said Peng, whose company has emerged as the largest food delivery provider in Ethiopia, the third-largest economy on the continent. 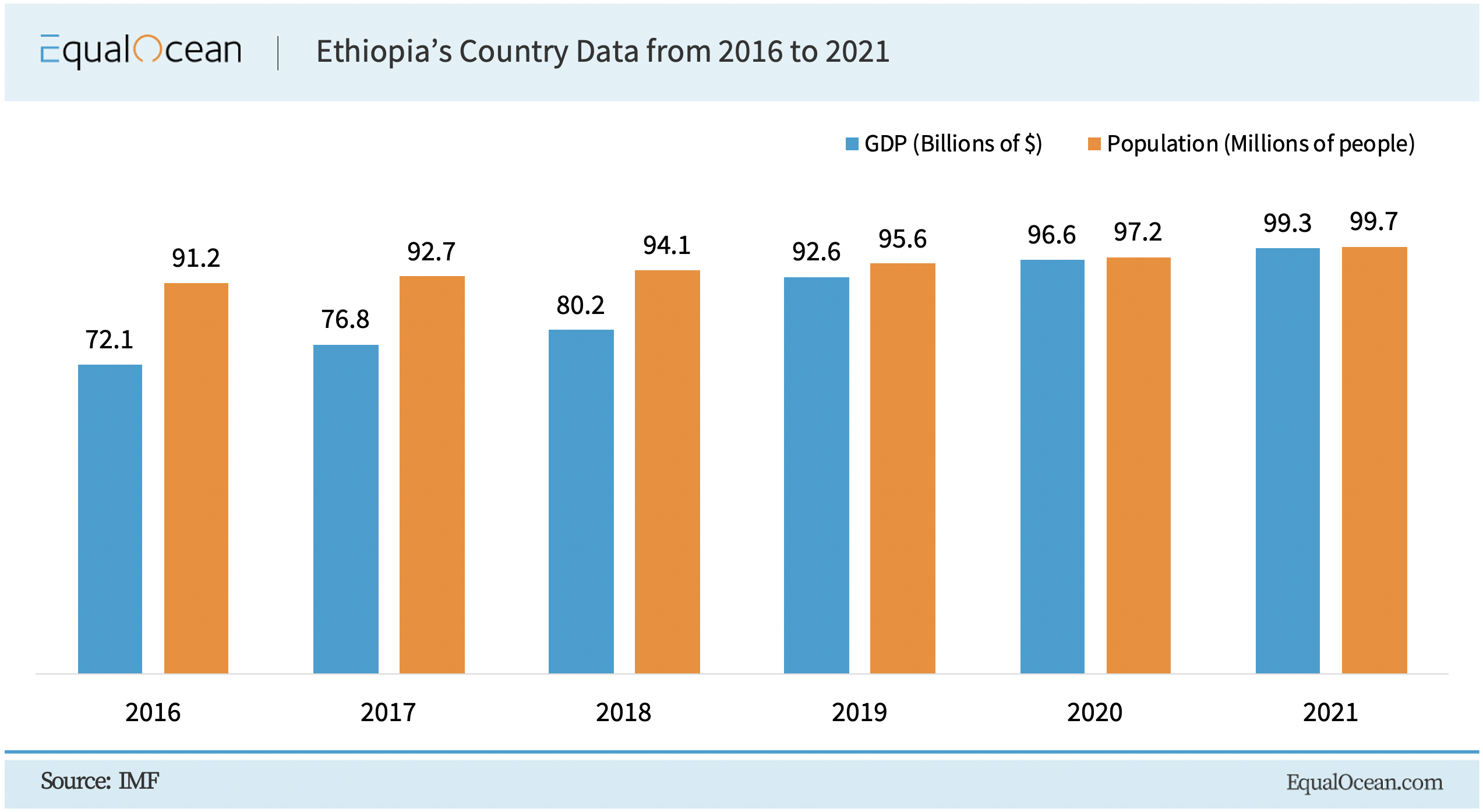 This means that new entrants like beU, which started out in 2019 as a social app in China and branched out into food delivery – and in a foreign country – only in June 2021, are entering uncharted waters. A largely untapped market awaited it.

Peng said before the entry of beU, Deliver Addis, a local startup founded by a U-raised entrepreneur, dominated the market. But eight months after beU came on the scene, its market share exceeded that of Deliver Addis by 20%, making it the new food delivery leader in Ethiopia, said Zheng Hao, founder and CEO of beU.

Consulting experts from domestic industry giants such as Meituan and Ele.me, whose fierce competition has had the unintended benefit of enhancing operational efficiency across the board, beU replicates some of their recipes for success to the Ethiopian market – adjusted to the local conditions of course. The startup recently made headlines for bagging millions of USD in seed financing round, led by Y Combinator.

According to Peng, six to seven food delivery companies were already there before beU entered Ethiopia. In this sense, beU didn’t enjoy the first-mover advantage, but the flip side is that these predecessors have already laid the foundation in terms of market education and user awareness. 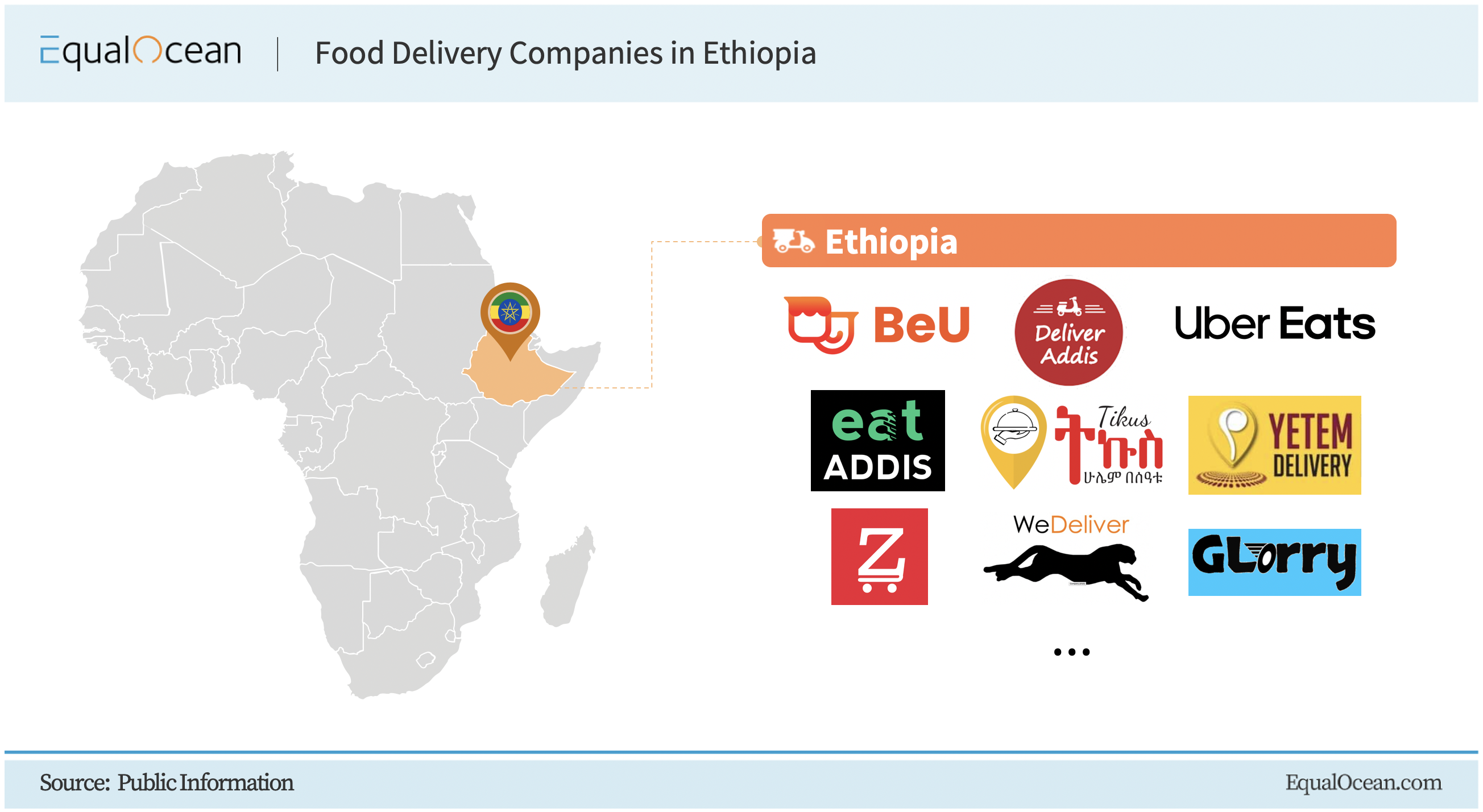 Nonetheless, a few years ago, conditions for the industry to take off were not ripe yet. Deliver Addis, the former top player, used to take orders placed via online webpages. And the industry was held back by low penetration of mobile Internet and digital payment, which has become a norm in many other parts of the world. By counting the average of daily takeaway orders for the biggest player at that time, beU figured it has plenty of room to gain market share, Peng added.

Development of food delivery began to enter a fast lane in 2021, when the Ethiopian government legalized innovations including cryptocurrencies and online payment. That's when beU decided to take the leap and enter the takeaway business in Ethiopia. It said it is now cooperating with the largest local telecom operator to provide mobile payment, in hopes of adding that option to its service in 2022.

Nevertheless, opportunities always come hand in hand with challenges, such as a different culture, and tax issues. Among the many headaches afflicting its local operations, Peng pointed to the address issue, saying that it tops the list of problems for many delivery firms, especially in Africa.

And this is why beU is bent on localizing its delivery service by hiring locals. Doing so make it easier for riders to navigate Africa’s streets – many without signs and thus not properly shown on Google map – and deliver food fresh and hot to the doorsteps of customers on time. And this seems to be one of beU’s most important business lessons for future market entrants in Ethiopia. Aside from about 10 employees on beU’s management team, the company hires 350 staff – many of whom are delivery drivers who know the place better.

Good management of its overseas team appears to be another thing that beU has got right. According to the company’s policies, it recognizes and rewards staff members with outstanding performance each week, and in this way good examples are set for others to follow. Financial incentives work best regardless of different cultures, said Peng. For instance, the startup sets deadlines for meal delivery, and riders who hit a certain on-time delivery rate (OTDR) are eligible for bonuses.

She also noted that beU plans to encourage the heads of the ride teams to set up their own rider firms, so that beU can cooperate with them instead of hiring them to relieve the management burden. At the same time, rider leaders will become the boss of their own company, resulting in a win-win situation for both sides.

Reflecting on the first month of beU’s foray into Ethiopia, Peng claimed it had to build a call center to receive orders, because the infrastructure and mobile technology had not gained ground in Africa. Besides, African people were then not accustomed to ordering food on apps. All this compelled the Chinese firm to tweak things in ways tailored to local conditions. 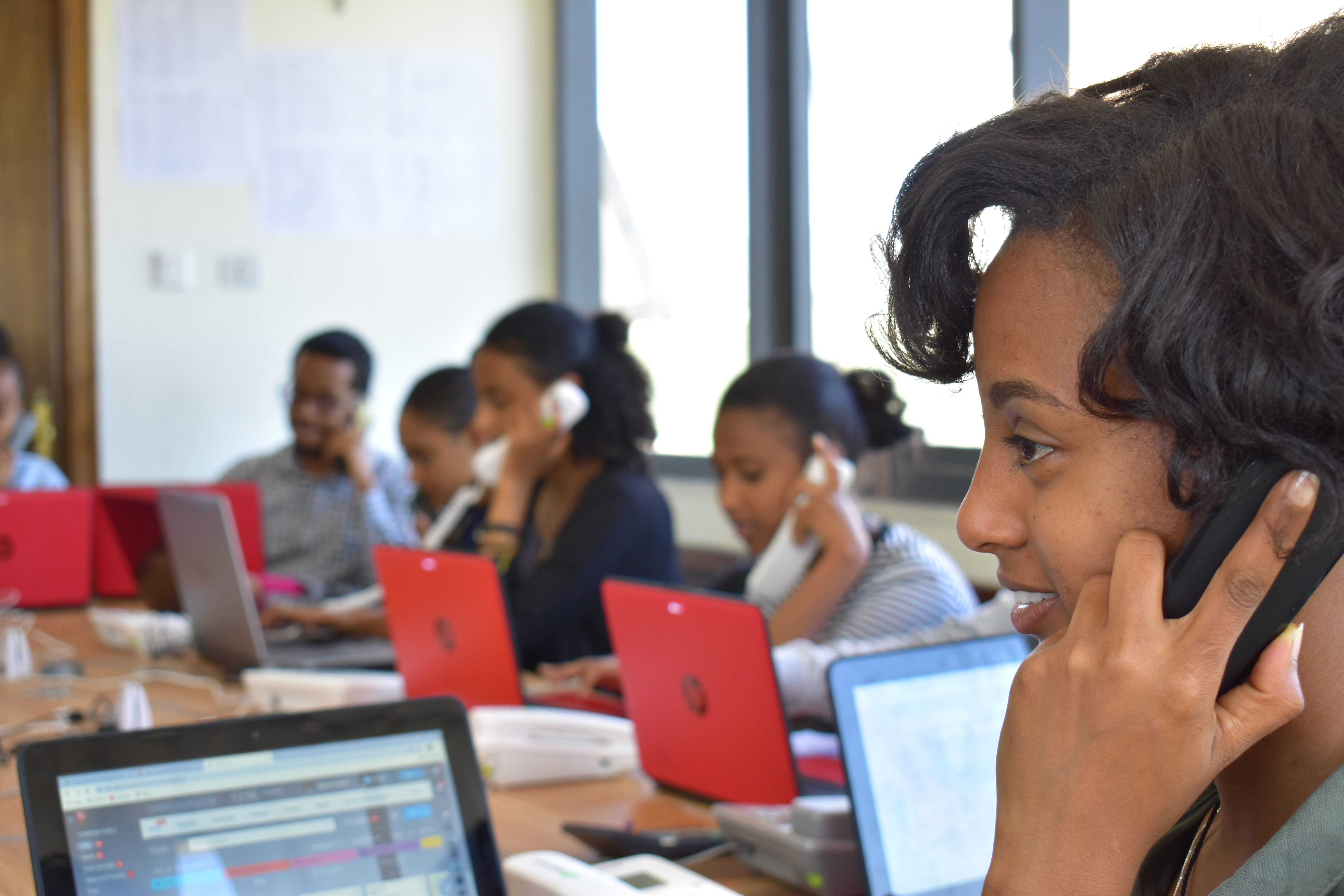 But now with things on the right track, and with some of the infrastructure and policy support now in place, the firm is starting to think bigger.

In the next five years, beU aims to build itself into a “super-app.” Food delivery has close correlation to other business segments, such as fresh food delivery services like Freshippo and Dingdong Maicai that people in China have taken for granted to be added into the app, so as to “reach out to more people.”

In addition, in a further step to move down the value chain, beU is planning moves into sectors such as 30-minute express delivery, hotel and car booking to enrich its online-to-offline presence, said Peng.