15 Chinese Companies to Watch in May 2022 – Healthcare

Editor's note: We at EqualOcean tracked the major funding rounds or industry events that took place in China’s healthcare space in May 2022. And the following is a list of deals that we have selected for you, based on a number of criteria including the funding amount, the financial backers, and the segments in which the startups operate. 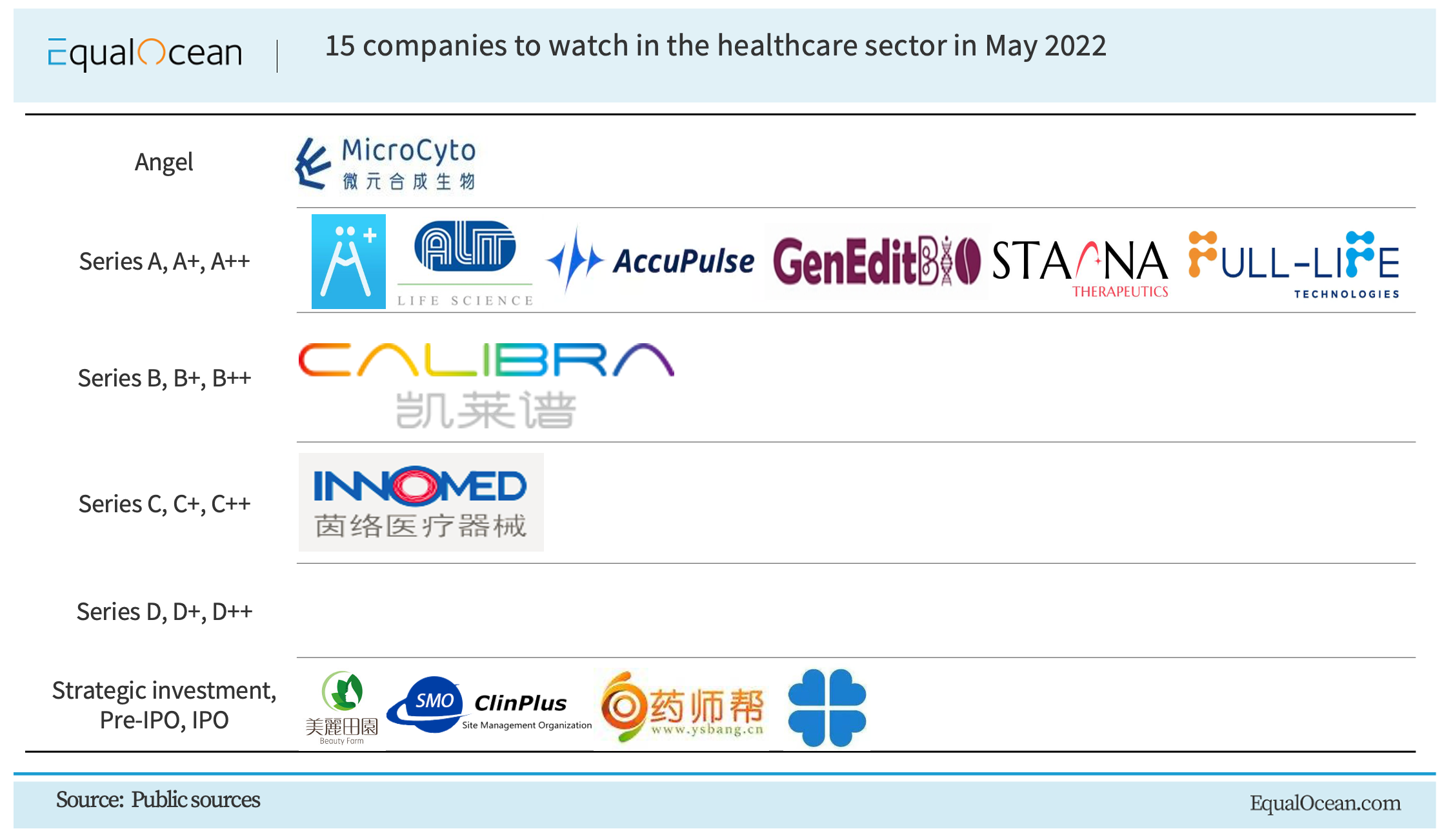 ALIT Life Science (Chinese: 艾力特生物科技) received more than CNY 100 million in the Series A financing round in mid May. The round was led by Loyal Valley Capital (Chinese: 正心谷资本), with participation from Addor Capital (Chinese: 毅达资本). Founded in 2005, ALIT has been committed to providing advanced biological lab equipment, technology and services. Its proprieytary high-throughput cell analyzer platform, Castor, is expected to be introduced to the market soon.

Cell therapy developer Hebei Senlang Bio (Chinese: 森朗生物) closed a financing round worth CNY 200 million in mid May. The round was exclusively invested by Qianhai FoF (Chinese: 前海母基金). Founded in 2016, Hebei Senlang Bio is a clinical-stage biotechnology company dedicated to utilizing cell and gene engineering technologies to generate innovative and transformative cellular immunotherapies for solid and hematologic cancers.

GenEditBio (Chinese: 引正基因) raised tens of millions of USD from its angel and pre-Series A financing rounds in late May. This round was led by Qiming Venture (Chinese: 启明创投), with participation from FountainVest Partners (Chinese: 方源资本). GenEditBio, founded in 2021, is a biotech start-up specializing in providing gene editing-based solutions for genetic diseases that have no cures or lack simple treatments.

Matrix-backed Unimed (Chinese: 同心智医) snagged CNY 100 million from the strategic financing round in late May. This round was led by China Merchants Capital (Chinese: 招商局资本) with participation from Bojia Capital (Chinese: 博佳资本) and Foresight Capital (Chinese: 博见资本). Founded in 2014, Unimed specializes in empowering the application of artificial intelligence (AI) in brain science diagnosis and treatment. Up to now, Unimed has provided services to more than 500 imaging centers and medical institutions across 26 provinces in China. It has served over 330 thousand patients with more than 39 billion medical records.

Calibra (Chinese: 凯莱谱), a precision health testing platform, netted CNY 220 million from the Series B+ financing round which was led by CICC Jiatai Fund (Chinese:中金佳泰基金) in early May. Fosun Health Capital (Chinese: 复健资本), Qishen Venture Capital (Chinese:启申创投), Xihu Venture Capital (Chinese:西湖科创投) and CICC Pucheng Investment (Chinese:中金浦成) also pumped money into this deal. Founded in 2016, Calibra has made key progress and breakthroughs in the construction of multi-omics platform. Its new generation of high-end clinical mass spectrometry, CalQuant-S, was approved by NMPA in March 2022.

Suzhou Innomed Medical Device Co., Ltd. (Chinese: 茵络医疗) received over CNY 100 million in a Series C+ financing round led by Innoval Capital in early May. Founded in 2013, Innomed is an innovative technology enterprise engaged in the development and manufacturing of interventional and implantable medical devices, and is committed to creating world-leading endovascular implantation interventional products.

Sequoia-backed radiatioon therapy Shanghai Full Life Technologies (Chinese: 上海辐联医药) raised CNY 250 Million from the Series A financing round in late May. This round of funding was led by Sequoia China, with the participation of Yinglian Health Fund (Chinese: 楹联健康基金), Junson Capital (Chinese: 佳辰资本), CDBI Partners (Chinese: 辰德资本) and Kunlun Capital (Chinese:昆仑资本). Founded in 2021, Full Life develops the platform to enhance the ability to produce high-quality and quantitative radioisotopes and to meet the unmet needs of radiopharmaceutical treatments.