What is NFT and Why should we care about it? A non-fungible token (NFT) is a financial security consisting of digital data stored in a blockchain, a form of distributed ledger. The core value of NFT lies in the assetization of digital content, which is the property right confirmation and transaction mechanism in the virtual world. 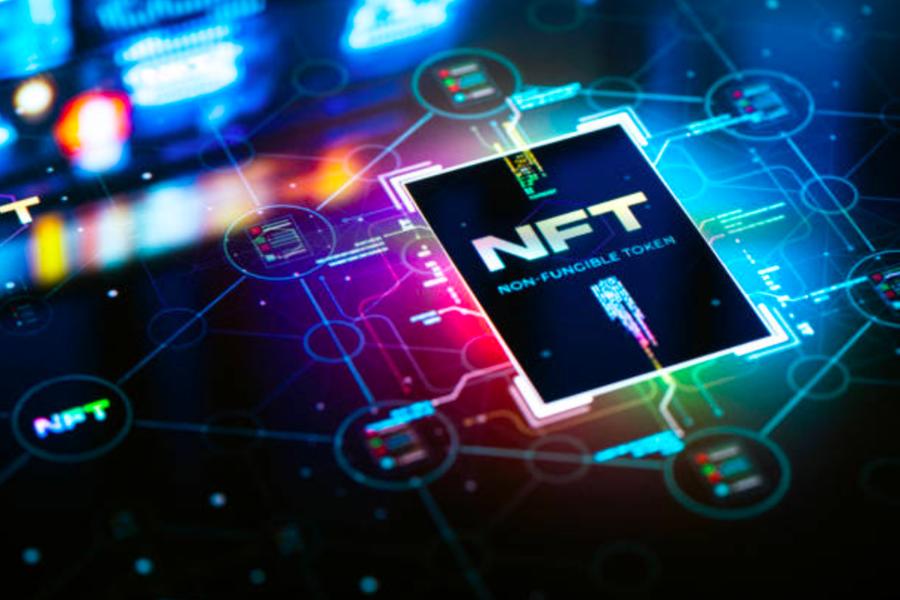 Non-Fungible Token (NFT) is an encrypted digital proof of rights and interests that cannot be copied, tampered, or divided, and is based on blockchain technology. It can be understood as a decentralized virtual asset or digital certificate of ownership of physical assets.

NFTs were introduced in 2021 and have been widely accepted thereafter

2021 is the banner year for the NFTs, which didn’t leave a visible mark until that year. In 2021, the NFT space generated over USD 23 billion in trading volume. Significant trends such as randomly generated collectibles, the involvement of mainstream celebrities in the space, or the rise of play-to-earn games, were the main drivers behind a boom of NFT. 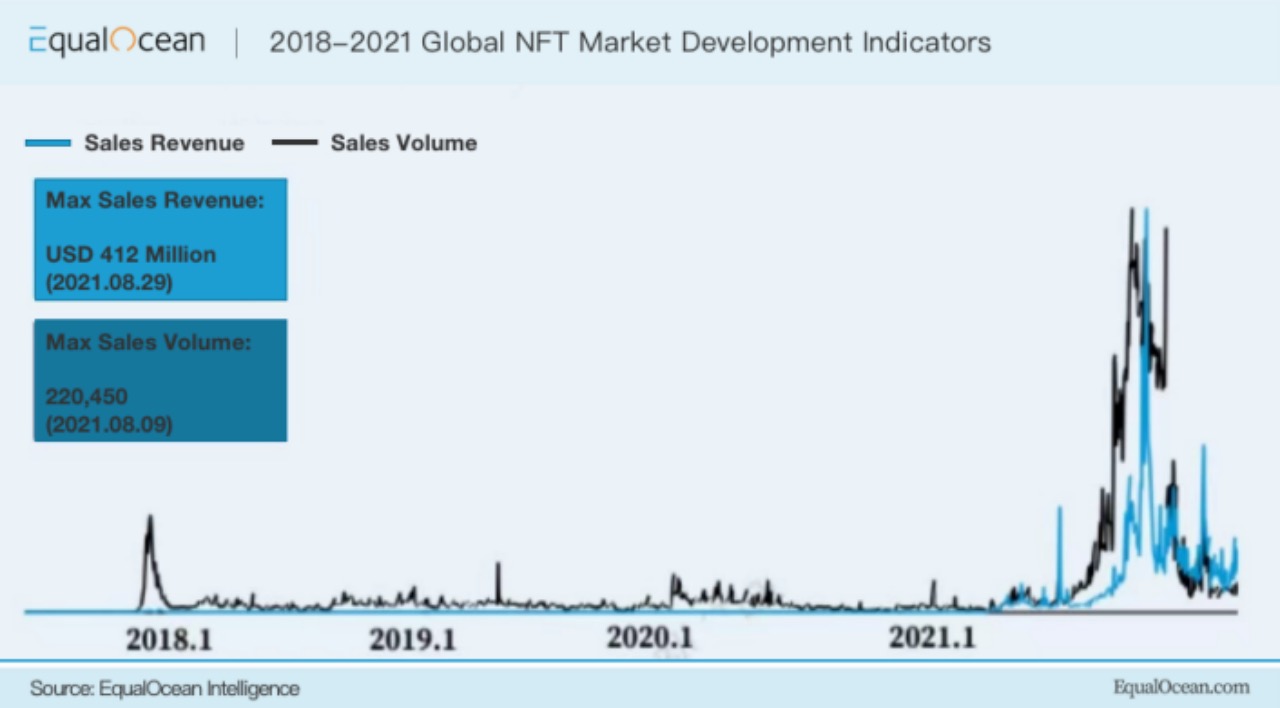 NFT is rapidly being accepted by users, and the number of daily active users of OpenSea, an American online non-fungible token marketplace, reached a new record at the beginning of this year. According to the data of DappRadar, an NFT-focused advisory firm, in January 2022, the transaction value of OpenSea increased to USD 4.491 billion, up 102% over the previous month, while the volume climbed to 2.8163 million times, 95% higher than a month earlier, and the daily active users went up by 86% month on month to 46,800. Data showed that more and more users are accepting NFT digital assets, participating in transactions and owning their own NFTs.

According to data from NonFungible.com, an NFT market intelligence provider, the trading volume of overseas NFT market rebounded at the beginning of this year, but it still did not return to the levels in August 2021. The trading volume in January this year reached USD 2.75 billion, up 120.4% month on month. The average transaction price of NFT has remained high since the end of the previous year, averaging about USD 3,000 per user.

David Lee, the Chairman of Global Fintech Institution (GFI) and the Vice President of Economics Society of Singapore (ESS), said that the market size of NFTs is tied to such sectors as entertainment, clothing, fashion, and real estate.

The development of NFTs is still in the embryonic stage, but they will gradually be used to tokenize every physical object in 10 to 30 years, said Lee. He added that by then, the development of NFTs will be such that they  overshadow the real economy, equivalent to the world’s gross domestic product (GDP).

Layered structure of the NFTs

In his opinion, the infrastructure layer provides blockchain and storage technical support for the casting, issuance and trading of NFTs. On the project creation layer, NFTs are “minted” according to the NFT casting protocols and then issued in the primary market. Issuers are myriad,  including IP licensors, project creators, project issuers, and issuers’ platform, in which the project issuer is the core. The derivative application layer is for the derivative application of NFT projects, including the NFT secondary market, financing platform, and social platform. 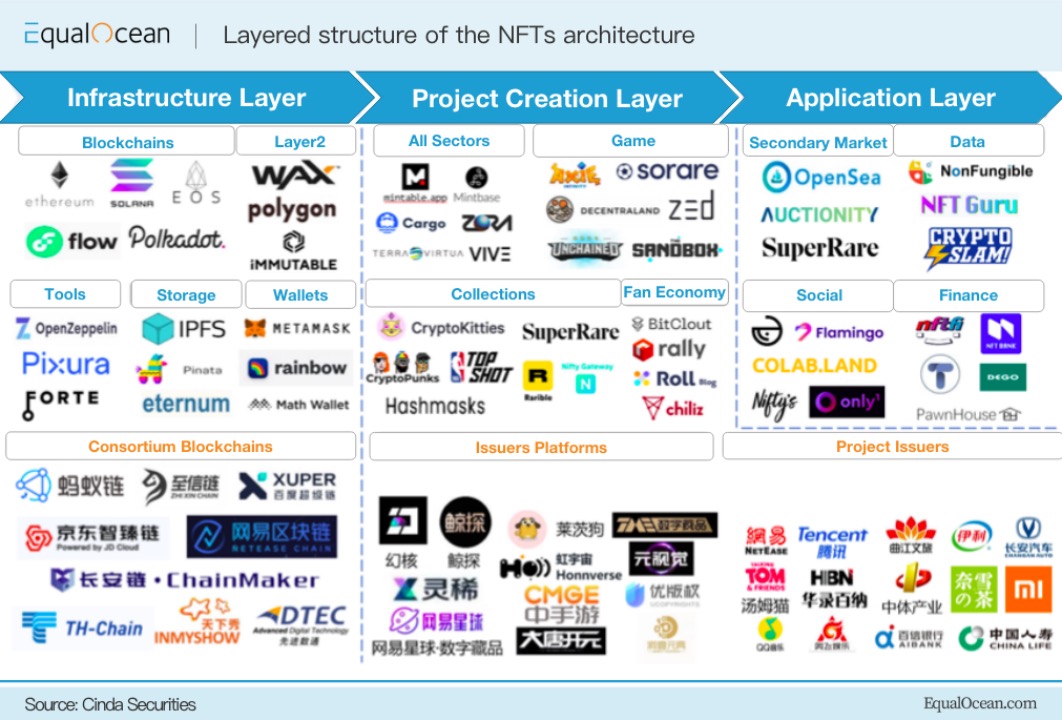 Worldwide, the total trading volume of NFTs was USD 2.547 billion from November 6, 2021 to January 5, 2022, of which 84.43% was based on Ethereum, and 9.65% went to Ethereum’s sidechain Ronin which is mainly used for Axie Infinity, an NFT-based online video game. Among the rest, Solana accounted for 2.70%. Flow, which provides technology support for NBA Top Shot, a platform for officially approved digital collectibles, contributed 1.58%. and the crypto-based transactions accounted for less than 1%.

In China, the blockchain for NFTs is mainly Consortium blockchains, such as Antchain of Alibaba (9988. HK), Zhixin Chain of Tencent (0700. HKG), Super Chain of Baidu (9888. HK), Zhizhen China of JD.com (9618. HK), and Tianhe Chain of Tangel Culture (300148. SH). Some projects or platforms are built on the public chain, such as the NFT China platform, which is built on Ethereum.

Most of the well-known overseas NFT projects, such as Cryptopunks, BAYC and NBA Top Shot, are published through self-built official websites or social media channels. The overseas NFT issuers’ platforms mainly provide digital work certificates for individual artists, such as SuperRare and Act Blocks, as well as platforms for individuals to mint NFTs, such as OpenSea and Rariable.

The application layer is the applications derived from the NFT projects in the project creation layer, including the NFT secondary market, financing platform, and social platform.

The overseas NFT application market is relatively more sophisticated/sound than China’s, and secondary market platforms such as OpeaSea, SuperRare, and Rarible strengthen the liquidity of NFTs and expand the space for appreciation.

In H2 2021, OpenSea's user volume and trading volume rapidly increased with the overall expansion of the NFTs. The number of users per day exceeded 50,580 on January 8 this year, and the turnover reached USD 140.63 million, with 105,200 transactions completed on the same day. 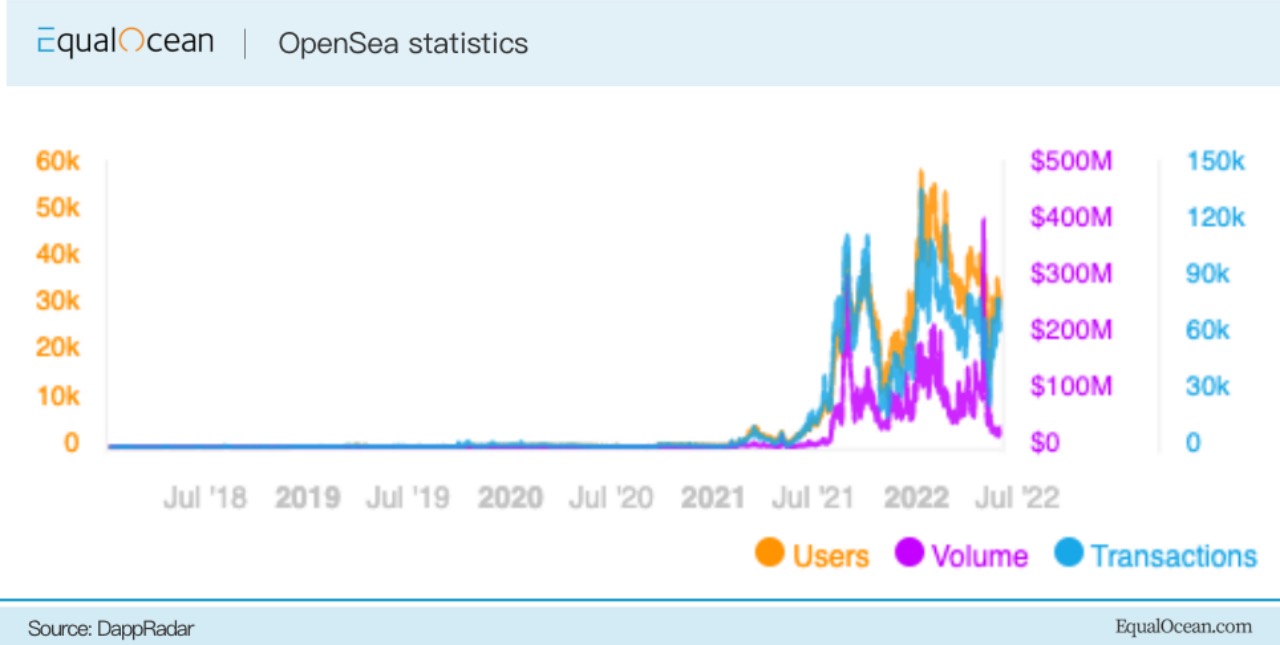 According to David Lee and Kross Liu, the regulatory framework concerning NFTs in China is not yet clear, so domestic platform operators are more cautious about trading in the secondary market.

Investment in the crypto industry has shifted from what is known as “democratic investment” to “monopoly investment,” meaning that small- and medium-sized firms will be increasingly squeezed out of the market as bigger firms take center stage. The future development of medium-sized companies and startups is restricted by the intervention of monopoly capital, David Lee said.

“The major difference between Web 2.0 and Web 3.0 is that the users will have rights to their own data in Web 3.0.”

Due to the characteristics of Web3.0 and NFTs, such as decentralization, trustlessness, and permissionlessness, users will care more about their privacy and the safety of their own data.

Lee believes that investment in NFTs will need to focus on the hardware and software of the infrastructure of NFTs, specifically, the privacy protection, data storage, and decentralized identification, in the next three to five years.

Despite the latest dip in the cryptomarket, metaverse tokens, including those backing up blockchain games, still overperform most of their peers. GALA, the native token of the Gala Games ecosystem, has been one of the best-performing assets within any industry on the planet, including the blockchain industry. In the previous year, GALA has appreciated by31,500%, easily outperforming any type of asset.

The establishment of a cultural property exchange requires certain qualifications and an official background. However, platforms similar to OpenSea have a lot of overlapping with the CCE at the business level. As such, CCE is expected to serve as the secondary trading platform for digital collections.