Hurtling at Home and Abroad: An Overview of China’s Auto Tech Sector in 2022

The first part of this analysis mainly unpacks the implications of the latest policies from Chinese government, such as how they can move the domestic car market going forward in 2022. The second part highlights Chinese auto tech companies’ expansion into overseas markets and its prospects. 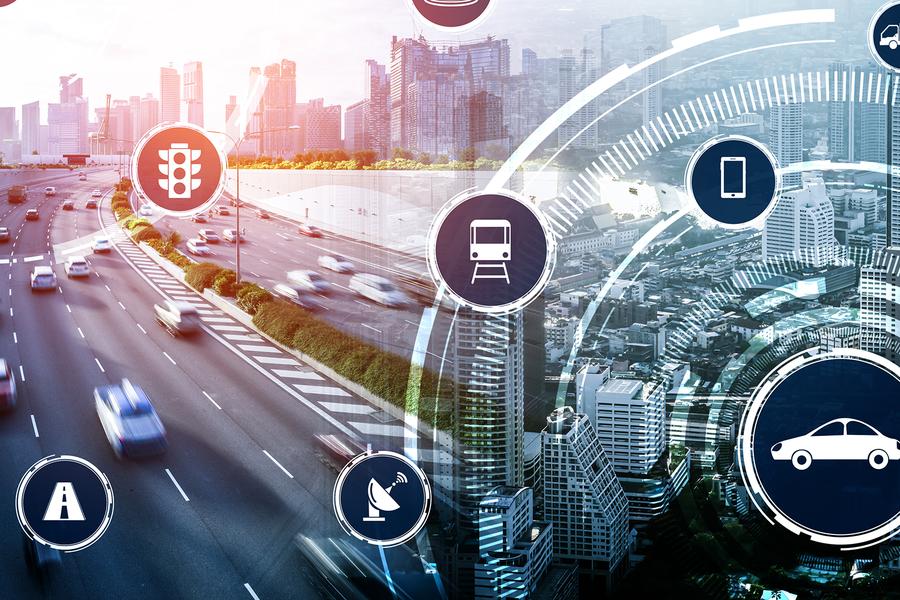 With the slowdown of China’s economy, real estate is no longer a strong “pillar industry” to underpin economic expansion. Instead, the government has set its sights on other growth drivers. Notably, the automotive industry, which has a long supply chain and is traditionally a big employer, is one of those favored candidates.

Covering many domains, the industry has a big role to play in improving the economy and employment. Thus, efforts to stimulate the auto sector are often given pride of place in China’s macroeconomic policy framework. Also, a more vibrant auto industry is compatible with the government’s aims to restructure and upgrade the economy..

On May 31, China released the policy aimed at boosting new energy vehicle (NEV) sales in rural parts of the country. It encourages cars to be sold to China’s countryside, so as to bolster domestic consumption. According to this policy, discounts will be offered for vehicles priced at under CNY 150,000 (USD 22,222), with a sum ranging between CNY 3,000-5,000 (USD 445-740) per vehicle. The new policy is expected to boost sales of NEVs by 300,000-500,000 units. Moreover, given its sheer scale, the discounts will amount to over CNY 1.5 billion and may reach as much as CNY 4 billion.

The so-called “Automobiles Go to Countryside” scheme was first launched in 2009 as part of a stimulus package China rolled out to unleash domestic demand. Under the scheme, rural residents were eligible for subsidies when buying vehicles with a displacement of 1.6L or less. Thanks to the policy, compact car sales jumped by 1 million units in 2009.

Due to the severe impact of COVID-19 on China’s economy, vehicle manufacturers are reeling from the pressures of falling sales in the domestic market. China’s new vehicle delivery plunged by 47.6% to 1.181 million units in April 2022 from 2.252 million in the same month last year, according to China Passenger Car Association.

The second policy that may push up car sales is that vehicle purchase tax will decrease by 50% from June 1 to December 31 in 2022, according to the Ministry of Finance. The government will cut the tax for cars priced at no more than CNY 300,000 (USD 45,000) and with an engine capacity of 2.0 liter or smaller. This policy is poised to have far-reaching repercussions as it covers over 95% of the vehicles on the market. Car buyers will be exempt from purchase taxes to the tune of CNY 60 billion. As a result,  2 million extra cars are expected to be sold. Based on the sales data from 2021, when more than 19 million cars were sold, our forecast is that the total amount of tax reduction will reach CNY 64 billion if the purchase tax drops from 10% to 5% over a period of seven months starting June. 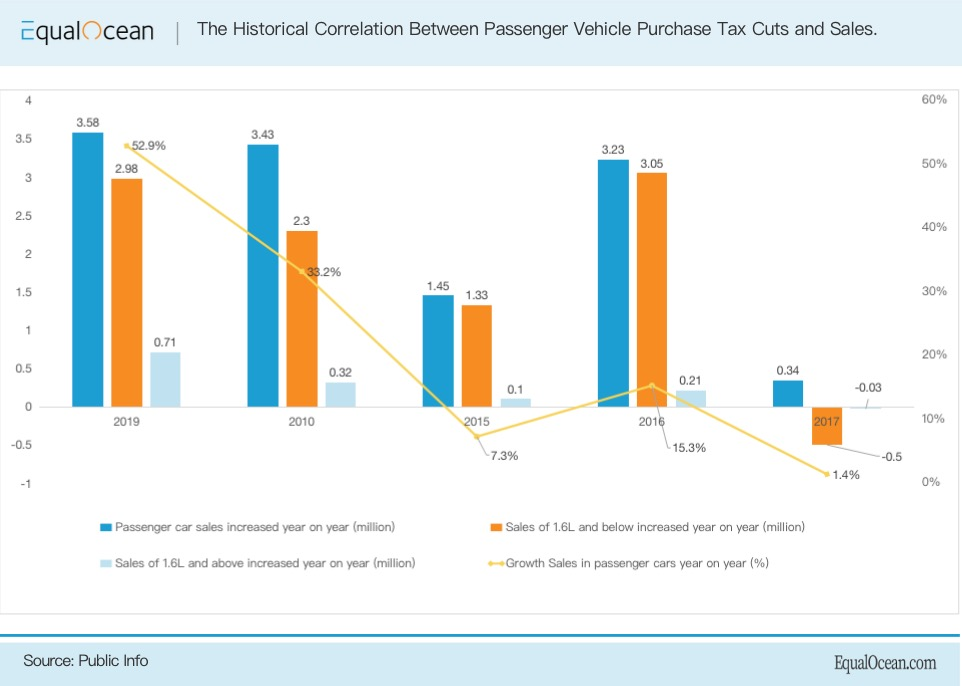 Data above shows the historical correlation between passenger vehicle purchase tax cuts and sales. Due to the lower rate of vehicle penetration, the purchase tax cut in 2009 performed much better than in other years. Sales of overall passenger vehicles and vehicles with a displacement of 1.6L or less in 2009 went up 53% and 71% year on year, respectively. It is notable that in 2018, the Chinese passenger car market contracted and sales slid 2.76%, the first time it registered negative growth in 28 years. This is despite tax benefits of different levels remaining largely in place. 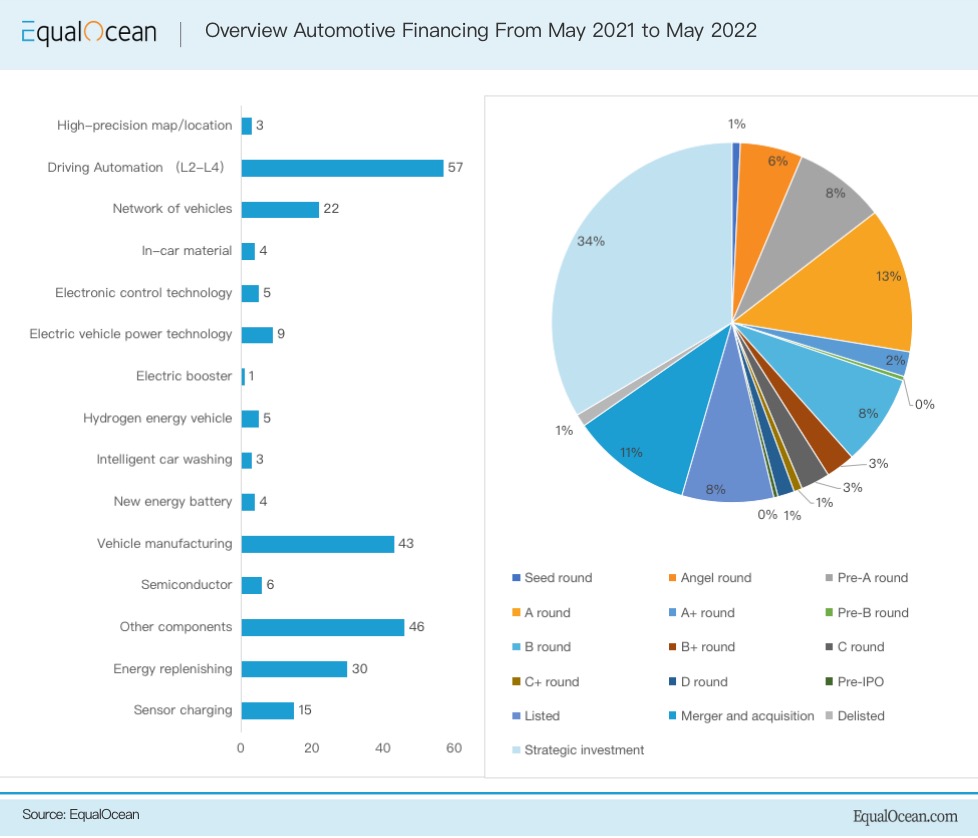 Of the 254 financing events EqualOcean recorded from May 2021 to May 2022 in the automotive industry, we found that 90 companies received strategic investments from domestic and international PEs, VCs, or OEMs, while 57 companies completed Series A and Pre-Series A financing rounds. What’s more, we also logged 22 firms at Series B round. Moreover, based on our research, most of the money poured into high-tech automotive domains including driving automation, sensors, semiconductor, network of vehicles, battery, and vehicle manufacturing.

Owing to macro factors, such as the stimulus policies directed at the automotive industry and economic restructuring, the industry or the whole supply chain will receive a huge impetus.  “Made in China 2025,” a national strategy, spells out the need for the country to upgrade the manufacturing capabilities of its industries, as it transitions from a labor-intensive “world factory” into a more technology-driven powerhouse. The blueprint also lays out the ambitions to nurture a number of high-tech automotive startups, which will not only be capable of competing with international tech giants like BOSCH, Waymo or ZF Group in China’s market, but also are sophisticated enough to expand to overseas markets. Notably, most of the driving automation and sensors’ startups in the automotive industry were established after 2015, when the “Made in China 2025” initiative came out.

Li Yuan, the founder and CEO of Benewake, told EqualOcean in an exclusive interview that they have received CE, FCC, RoHS, REACH, FDA and ICE certifications, suggesting that Benewake’s products are given the greenlight to sell to most countries in the world. To date, Benewake mainly focus on the European, North American, Australia, Newzealand and Asian markets. Also, the business model it adopts in tapping overseas markets is characterized by direct sales on e-business platforms and franchising via local agencies. Benewake’s commercialization of LiDARs in overseas markets went smoothly. In 2021, the company’s LiDAR shipment was 600,000 units, and more than 50% of its revenue was derived from international markets.

UISEE (Chinese: 驭势科技), a Chinese autonomous driving company founded in 2016, offers AI driving services for all industries and all user cases. It is also building AI “drivers” that empower a new mobility and logistics ecosystem.

Peng Jinzhan, the co-founder of UISEE, spoke to EqualOcean that UISEE focuses on development of L4 autonomous driving. Since December 2019, the company has been phasing out safety workers step by step to realize real autonomous driving in airports and harbors that partner with UISEE. Meanwhile, Peng believes that technology should not stay inside laboratories all the time and commercialization is the goal.

UISEE is exploring overseas markets, including Southeast Asia, East Asia, South America and Middle East. The ways in which UISEE collaborates with local companies is flexible: The company would find a local partner, and then provide software, hardware and platform. For its part, the local partner is obliged to offer application scenarios and data. Also, investment or joint venture are among some other forms of cooperation between UISEE and local companies in the future.

TrunkTech (Chinese: 主线科技) is an AI-powered tech startup that develops L4 autonomous trucks for logistics and transportation. The company was established in 2017 and joins hands with logistics companies such as Deppon (Chinese: 德邦快递)，STO Express (Chinese: 申通快递) and others, and its self-driving system “Trunk Master” has reached mass production.

Zhang Tianlei, founder and CEO of TrunkTech, said the company works together with its clients in various ways. For example, it offers transport services to logistics firms, or sells smart trucks directly to clients. Also, TrunkTech and client occasionally operate the transport services together. In addition, Zhang said the focus of the company’s international business expansion is on Europe and Southeast Asia. This is because labor cost is relatively high in some developed countries of Europe, and Southeast Asia is short of labor to fuel its fast-growing economies.

During the interviews with EqualOcean, Benewake, UISEE and TrunkTech have expressed the same views about the benefits of expanding to advanced economies and developing countries facing labor shortages. Also, the countries along China’s “Belt and Road,” a global economic strategy aiming to connect countries through infrastructure building and related financing,  are also potential markets for these high-tech Chinese startups. Also, though a latecomer to the race, Chinese firms can overtake foreign peers in the area of driving automation (L3-L4), or at least give first movers from the industry a run for their money. 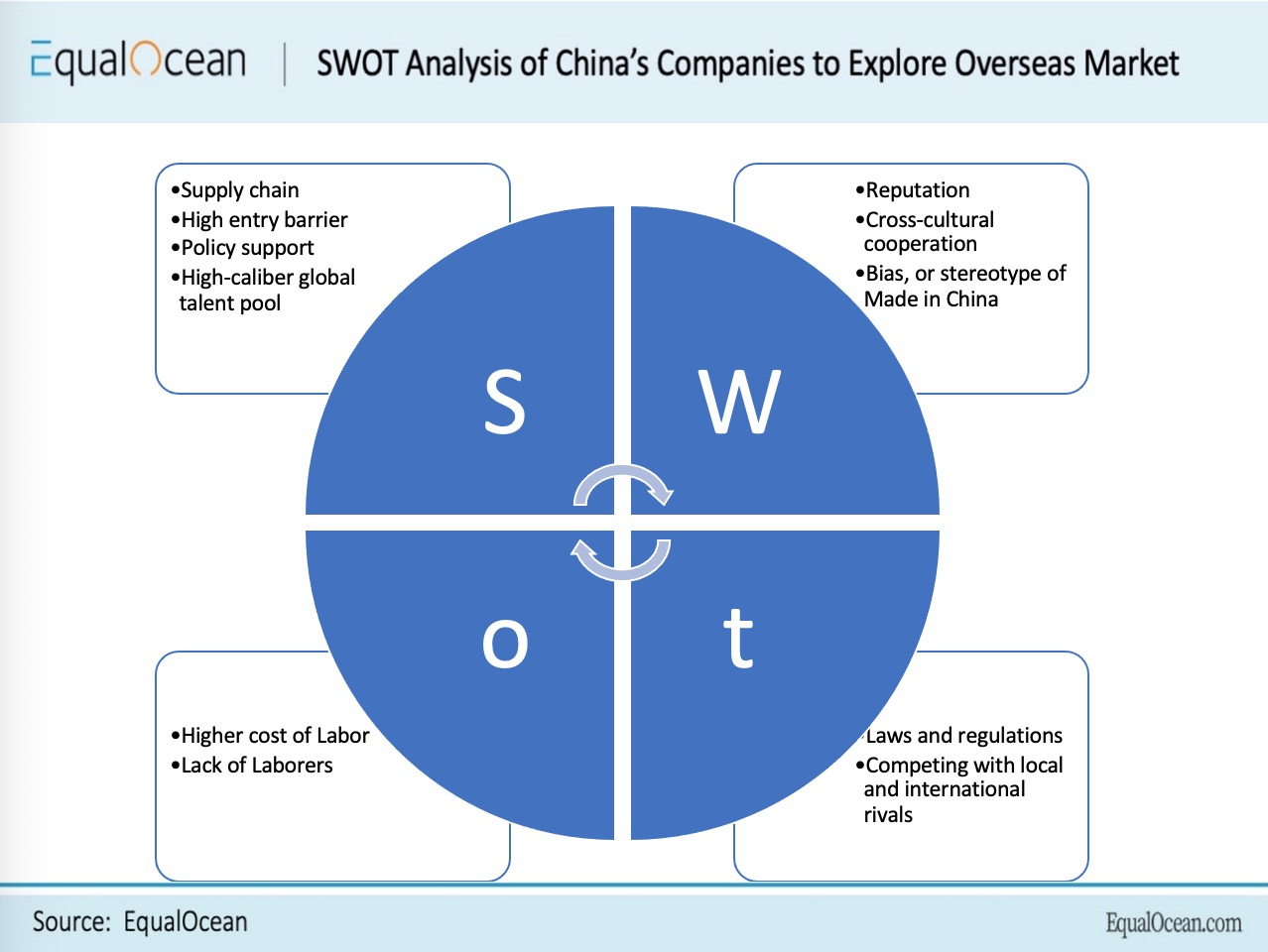 The merits for Chinese auto tech companies to venture into overseas markets are myriad. But this is also a process replete with challenges. We at EqualOcean figure that a SWOT analysis will help readers better understand the strengths and drawbacks of Chinese auto tech players in their quest to globalize their operations.

Strengths – “Made in China” will be redefined by China’s high-tech companies. One of the most significant strengths for Chinese companies to expand to international market is the supply chain. Contrary to many countries in the world, China has a complete supply chain, giving its products and services a big competitive advantage over others. Plus, most of the high-tech startups’ founders in China have studied abroad and obtained doctorates there. Meanwhile, China’s government provides supportive policies to encourage companies to explore overseas markets.

Weaknesses – The first weakness is reputation. Due to stereotypes about “Made in China” in the world, it may create an image liability to China’s companies. Cross-cultural management is a shortcoming for many Chinese companies. For example, a series of TikTok’s workplace policies and corporate culture, such as the demand for overtime work and denial of benefits like maternity leave,  recently outraged its UK employees, prompting an exodus and casting the company in a negative light.

Opportunities – The lack of laborers can be an opportunity for Chinese firms. This is especially true for some countries in Southeast Asia. For developed countries, the labor cost is relatively high. Therefore, L4-grade driving automation in specific places such as harbors, airports, or industrial parks can help cut costs.

Threats – Entering the markets of developed countries presents an alluring opportunity, but it could be a threat as well. For example, in some European countries and in North America – home to tech giants such as BOSCH, Continental, ZF Group or Waymo – heads-on competition with these titans will be tough for China’s emerging tech champions. This requires them to not only offer high-quality products and services – but offer them at lower prices. In addition, laws and regulations in these countries, which tend to be stricter, also constitute a barrier, since lawmakers and citizens are more concerned about privacy and data safety. As such, China’s high-tech firms must make some adjustments to meet the compliance requirements of developed countries. Meanwhile, the global geopolitical tensions and overall negative opinion of China could also hold Chinese firms back. 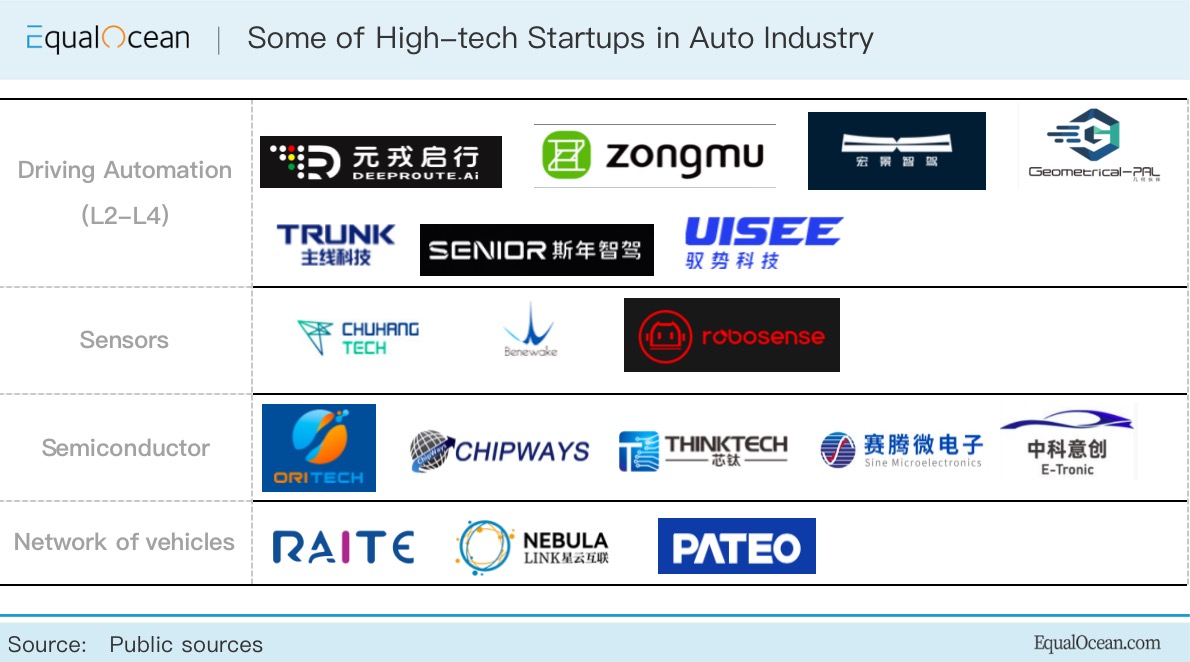 EqualOcean believes that China’s auto-tech companies have the shared vision of expanding to developed countries and to developing economies beset by labor shortages. Also, China’s vaunted “Belt and Road” initiative promises to open up a number of new markets for Chinese players. Moreover, with more cash injections from the venture capital community and government policy support encouraging the growth, among others, of Driving automation (L2-L4), sensors and network of vehicles segments, Chinese firms have a high probability of coming from behind and even beating foreign rivals at their own game. We at EqualOcean thus are optimistic that a greater number of auto-tech companies will go global in search of business opportunities on a wider scale. All in all, based on factors at both the macro and micro level, a foray beyond the borders will be the future for Chinese companies.