With the bottom line under pressure, Zai-Labs demonstrated growth potential. There is a large unmet demand for novel drugs, particularly in oncology, but competition is fierce. R&D spending accounts for a sizable portion of total spending. However, we anticipate that the pipeline that is currently being developed will help to boost growth. 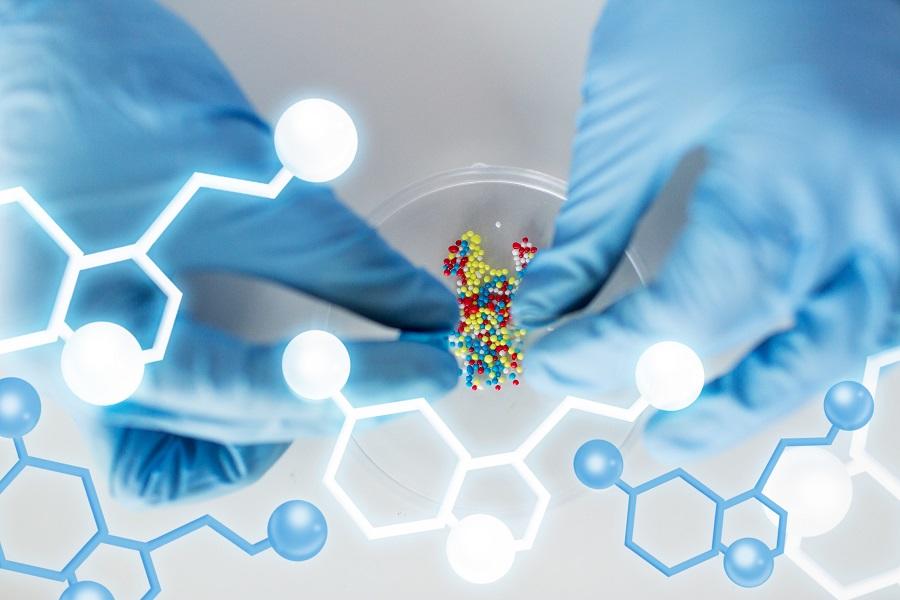 Zai-Lab's current situation does not look good, as it is one of 105 Chinese stocks that could be delisted from American exchanges. Its stock has dropped nearly 90% since its peak and is now trading near its historical low on the NASDAQ. Its 2021 annual report forecasted growth, but it is still falling short of expectations. However, we continue to believe that Zai-Lab has the potential to become the undisputed king of the novel drug industry.

How is Zai-lab the next king?

Zai-Lab is a leading Chinese pharmaceutical company specializing in the treatment of oncology, autoimmune disorders, infectious diseases, and neurological disorders. Its primary business is the research and development of novel drugs, which differ from generic drugs in that they can be sold after the patent on the original drug expires and claim to have the same ingredients and effects.

Zai has actively pursued the license-in model, purchasing pipelines from other companies to diversify its pipelines in order to quickly meet unmet demand and facilitate its own research. It currently has four medicines that are on the market, 11 developing internal programs with global rights, more than 28 drug candidates, and over 50 ongoing or planned clinical trials. The company is also well-known for its strong research and development capability, pipelines with a broad range of disease coverage, innovative-oriented teams that include both accomplished scientists and investment experts, and well-established labs around the world.

Zai’s star products include Zejula (niraparib), Optune Tumor Treating Fields, Qinlock Ripretinib, and NUZYRA (Omadacycline). Zejula is an FDA-approved small molecule poly (ADP-ribose) polymerase ½ inhibitor for epithelial ovarian, fallopian tube, or primary peritoneal cancer and their subtypes. In the Chinese market, there are three other similar products, Olaparib (AstraZeneca), Fluazolepali (Hengrui), and Pamiparib (BeiGene), but only Zejula and Olaparib are approved for the maintenance treatment for the first-line ovarian cancer and have been added to the catalog of medicines covered by the national medical insurance system.

Considering the market, there are over 55,000 newly diagnosed ovarian cancer patients in China, with over 37,000 deaths, creating a massive market for Zejula, and the unmeet market for oncology novel drugs is even larger and rapidly expanding. 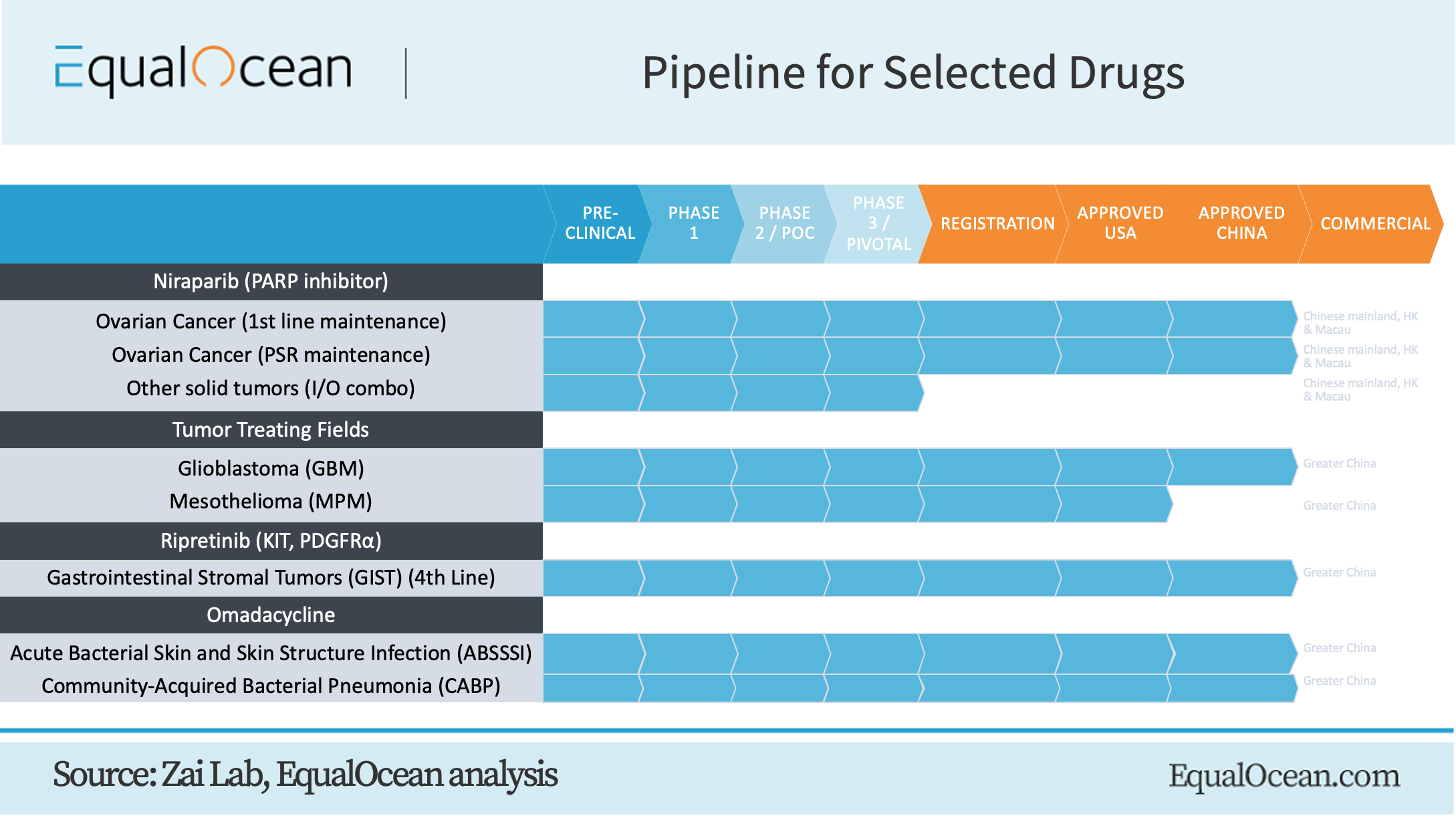 Zai's expansion is linked to the Chinese novel drug market's blooming, which is driven by a variety of factors. Firstly, as people's living standards improve and their awareness of the importance of health grows, generic drugs, which may be less expensive but sometimes face safety and effective concerns, can no longer meet the patients' needs. Aside from that, guided by the belief that innovation is the key driver to sustainable growth, China has increasingly promoted innovations across different industries, including the pharmaceutical industry. Lastly, to drug-making companies, although the upfront cost is huge and risks in the development stages are uncertain, successful novel drugs can bring them significant economic and social benefits that generic drugs can not.

The global market for oncology drugs, which is one of the many areas Zai's products focus on, is experiencing rapid growth and has reached USD 121 billion, from 2016 to 2020. Despite accounting for only 7% of the global oncology drugs market, China has the highest CAGR of 18.5% when compared to other markets, indicating a high growth potential. In comparison, the United States accounts for half of the global market and has a 10.1% growth rate.

Among all the medicine, oncology drugs account for 11% and generated CNY 753 billion in sales in China in 2020. However, generic drugs, such as chemotherapy drugs, are still widely used in oncology treatment in China, accounting for 35% of oncology drug sales versus only 7% in the United States, indicating a significant opportunity to replace generic drugs with novel drugs and attract more companies to enter the market.

In general, China and the United States are having a close game, in the development of innovative oncology drugs. In China, oncology drugs account for a significant proportion of novel drugs that are under development, however, drugs based on cutting-edge technologies such as antibody-drug conjugates (ADC), gene therapy, and cancer vaccines are still short in number.

Even though the oncology novel drugs market is full of opportunity, there are some roadblocks, such as the growing number of players, which leads to more homogeneous products targeting popular diseases and the neglect of drug research and development for certain diseases, such as liver cancer, stomach cancer, and esophageal cancer, which are more common in China.

With strong policy facilitation and easing in the drug registration and review process, China's oncology novel drugs market is still thriving. According to Pharmcube, in 2018, Chinese companies led 75% of the registered clinical trials of oncology drugs in China. Furthermore, because of innovation, the number of China's first-in-class and me-too medications that file for clinical trials is experiencing rapid growth, particularly for monoclonal/polyclonal antibody medication. Also, rather than licensing-in mature pipelines from overseas companies like in the past, more and more Chinese companies began going globally by licensing out their medication.

Aside from drugs that are under development, four to the fifth of Zai's products are targeting oncology, which is also a focus area for BeiGene and Hengrui.

BeiGene is a leading novel drug developer in China, with robust R&D strength, and has the first FDA-approved and USA marketed (Bruton's tyrosine kinase) BTK inhibitor that was developed by a Chinese company. The BTK inhibitor market is expected to grow to USD 17.8 billion by 2030. The company is also one of the top holdings of Hillhouse Capital.

There are also larger players in the global novel drug market, such as Roche and Novartis. Roche China currently has 24 medications on the market that cover eight major therapeutic areas. Despite the fact that both products are focused on different technologies, Because of Roche's strong R&D capabilities, its CD20xCD3 bispecific products Mosunetuzumab and CD20-TCB can pose a threat to Zai's REGN1979, a CD20XCD3 bispecific, for the treatment of refractory B-Cell Non-hodgkin Lymphoma.

Novartis is aiming to provide patients with novel medication in cardiovascular, oncology, immunology, and neuroscience which is powerful by cutting-edged technologies. Recently, Novartis announced a company structure change, integrating the pharmaceuticals and oncology divisions into the innovative medicines division, showcasing its confidence in the innovative drug market. Its collaboration with BeiGene on non-small cell lung cancer (NSCLC) and kidney diseases may jeopardize Zai's future research and commercialization efforts in these areas. 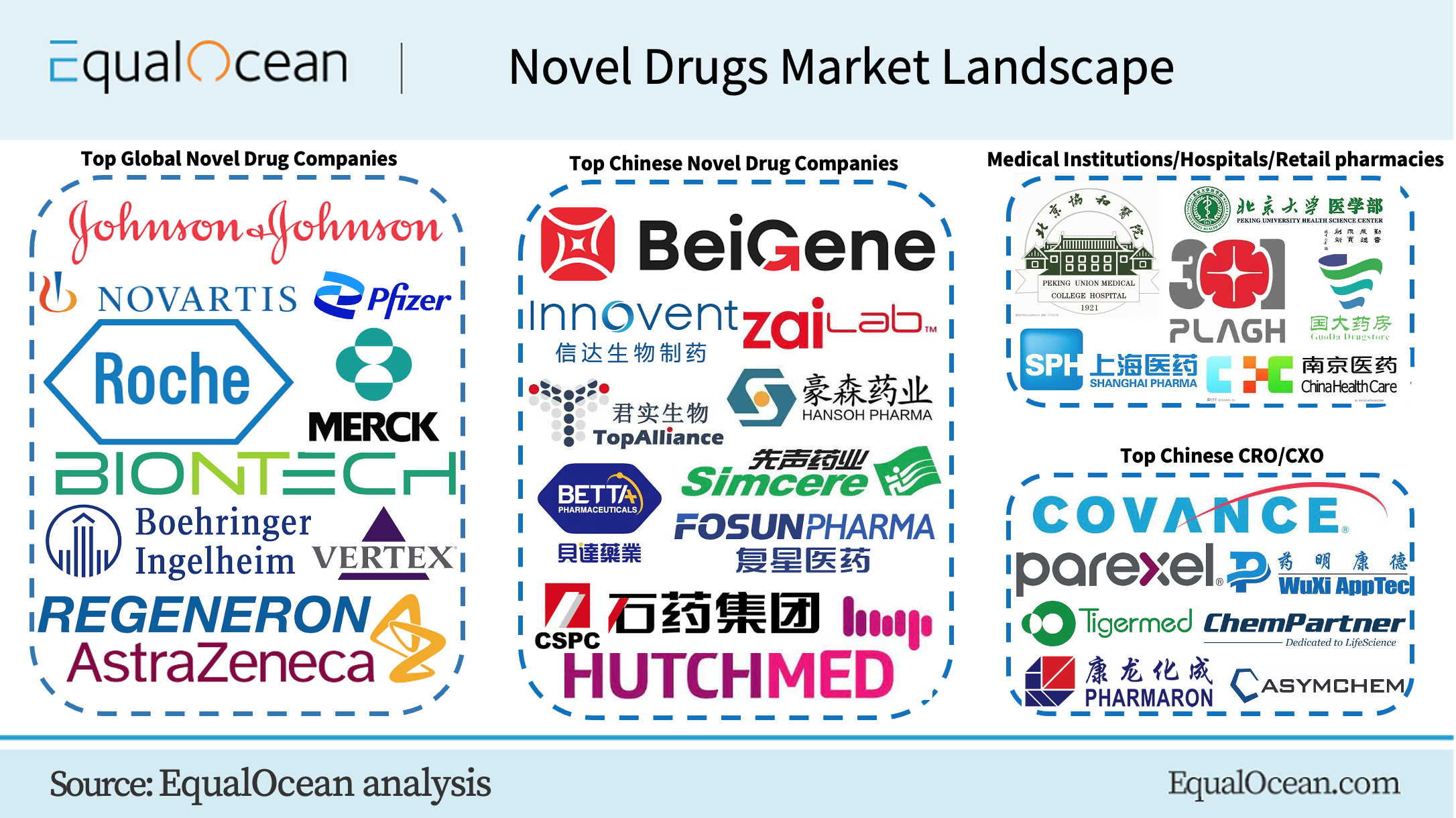 Because of its reliance on the license-in mode, which is a two-edged sword, Zai's is more vulnerable to threats, in comparison to peers like BeiGene and Hengrui, which have demonstrated stronger R&D capabilities.

Zai is already one step behind in the development of their own novel drug, despite the fact that their licensed-out model allows them to rapidly expand their pipeline to fill the unmet novel drug market. Furthermore, as Zai has begun to invest in R&D of their own product, the cost of R&D is expected to remain high, putting pressure on the bottom line. 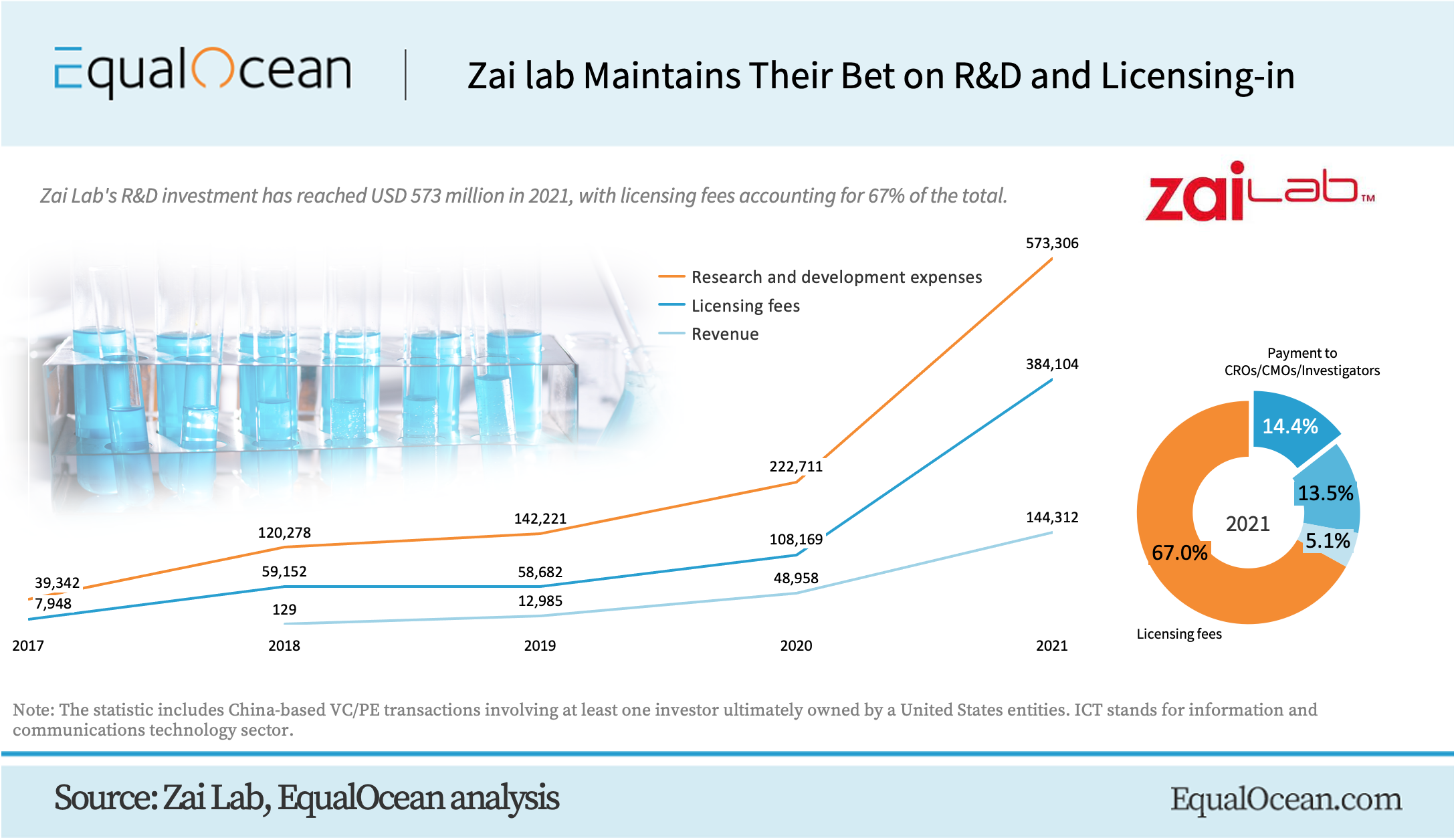 The results of Zai's FY 2021 financial statement were in line with expectations that the loss would continue. According to the report, revenue increased 194% year on year, reaching USD 144 million. The expense has also increased significantly, particularly in R&D, increasing by 157% year on year to USD 573 million, and accounting for 67.9% of operating expenses and roughly four times its revenue. Licensing fees in 2021 totaled USD 384.1 million. The most recent quarter's current ratio is 8.99, indicating that Zai has a strong ability to pay its short-term obligations.

Overall, Zai's net loss was USD 704 million in FY 2021, up 162% from the previous year. The company has significant R&D costs, which is a common issue for pharmaceutical companies. It is required because the significant benefit will not be realized without significant up-front costs. However, their business model is being called into question.

We anticipate that Zai will break even in 2029 if it can first maintain its high growth velocity, assuming 70% year over year growth for three consecutive years, and then maintain a 55% growth rate for the next three years, followed by a 30% growth rate thereafter. Furthermore, R&D and selling, general, and administrative expenses are assumed to remain at 30 % and 20% for two consecutive three years, with a rate of 15% thereafter. Under these conditions, Zai's will exceed break-even in 2029.

We believe Zai is undervalued and recommend it as a buy, owing to its low EV/EBITDA multiple in comparison to the industrial average and its larger peers. As of today, Zai has an EV/EBITDA of -4.27x, which is significantly lower than the pharmaceutical industry median of 15.07x, Novartis' 6.57x, and Roche's 13.15x, indicating a higher growth potential. We estimate that Zai will reach USD 49 by the end of 2022.