Where Will AI Take Drug Discovery in China to?

The development of drug discovery in China is relatively slower than in many other countries but China’s pharma market size is among the top three worldwide. Deeper exploration of drug discovery is much needed in China. AI can make a machine execute tasks like a human or even better than humans. With many emerging AI-powered drug discovery companies in China, can AI help China beat the pioneers in drug discovery at their own game? 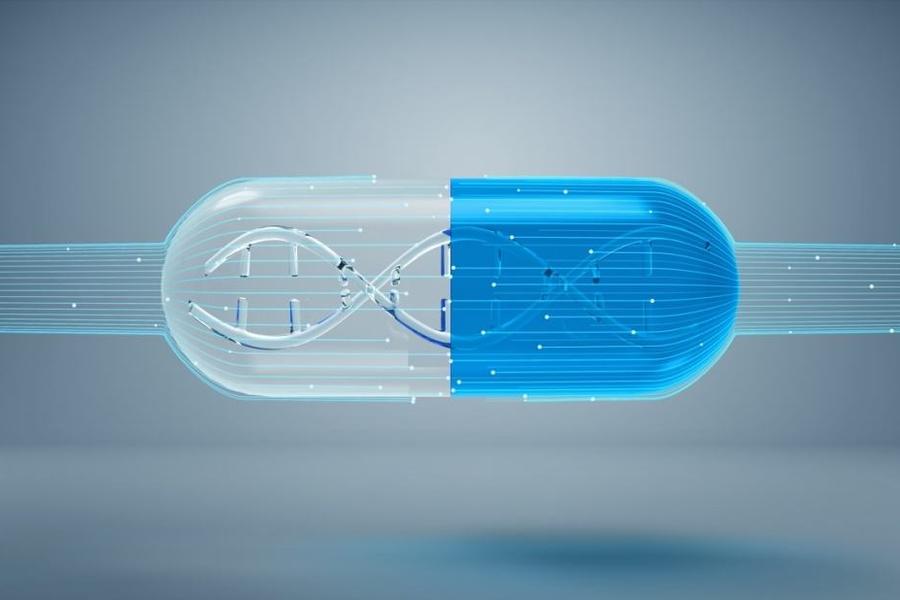 “Drug Discovery” is a simple term but implies a very lengthy, costly, and risky process.

IND (Investigational New Drug) is the key to setting the boundary between preclinical and clinical stages. The approval of an IND application marks a huge milestone during drug discovery and moves the research to a clinical stage where trials and experiments are conducted in real scenarios and on humans.

Public data have shown that the average time for a new drug to proceed from the initial discovery to the final product launch is about 10 years. And the estimated cost is at least USD 1 billion on average. Of the vast number of drug research projects, less than 10% can make it to the clinical trial phase. Moreover, the screening of clinical trials will also kick out over half of the candidates. Only a small portion of candidates will reach the market as a product.

With a population of 1.4 billion, China exhibits a natural high demand for “a healthier life” and advanced pharmaceutical R&D.

Due to a rapidly aging population, changes in dietary habits and increasing work pressure, the incidence of diseases such as cancers, diabetes and other chronic ailments is growing each year in China. According to the latest national census, the percentage of people aged 65 or above is beyond 14%, indicating that China has officially entered the aging society. Against this backdrop, there has been an increasingly urgent need for novel drugs and advanced pharmaceutical R&D to meet those unmet medical needs.

It is estimated that China’s pharmaceutical market will reach USD 161.8 billion by 2023 and take a 30% share of the global market, second only to the United States. However, currently most of the drugs in the market are either generics or developed outside China. There is lack of China-based pharmaceutical R&D, which is mainly a result of historical regulatory protocol.

2015 is a pivotal year marking the start of China’s transition to “innovative drug” from “generic drug.”

Before 2015, China was simply a manufacturing hub of generic drugs with little pharmaceutical R&D. The development of novel drugs was not promoted, and China had very limited access to novel drugs.

At that time, new drugs already launched in the other countries typically experienced five to seven years of delay before being launched in China, not to mention China-developed novel drugs.

The most important reason for such a delay is the limited manpower at the Chinese national regulatory authority (NRA). Only about 100 drug evaluators were tasked with screening an overwhelming number of clinical trials and marketing applications for both novel drugs and redundant generics, which significantly delayed the debut of novel drugs. The number of backlogged applications reached its peak at 22,000 in mid-2015.

In 2015, the State Council, or China’s cabinet, reformed the medicine review and approval system by clearing the backlog of former applications, especially for redundant generics. It also put in place a special review and evaluation process for novel drugs with urgent clinical needs, which encouraged and accelerated the development of novel drugs in China. 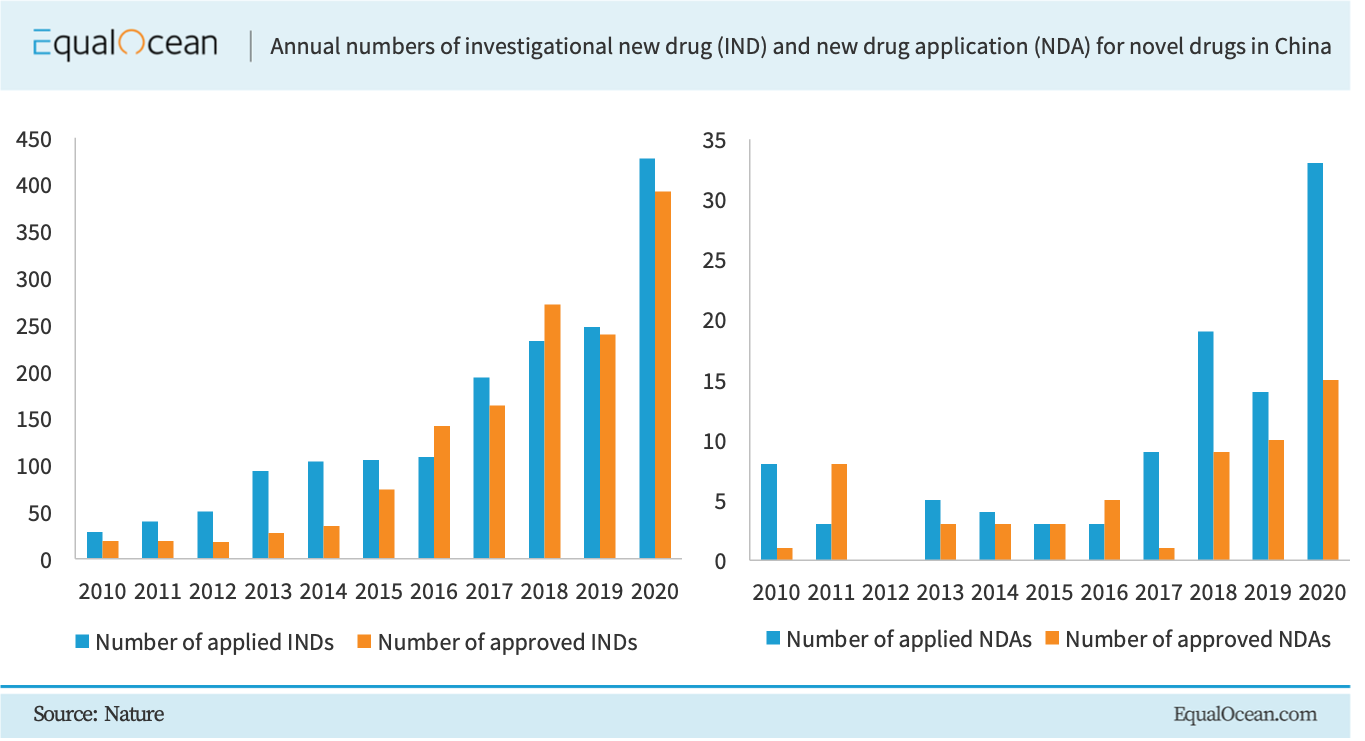 With the toughest barrier being cleared out, China-based novel drug companies started to spring up and catch investors’ attention.

Due to the late start, there is still a gap between China and other countries in terms of the development of pharmaceutical R&D.

Even though top Chinese pharma companies such as Fosun Pharma and Hengrui Medicine have been big international pharma players, still, 97% of drugs sold by local Chinese companies are generics.

China’s market needs novel drug products and can also accommodate companies with advanced pharmaceutical R&D, although time is a major limitation in the process of development.

AI is a revolutionary tool that helps accelerate the development of drug discovery in China.

One of the most popular applications of AI is autonomous vehicles (AVs) where machine learning or deep learning is highly integrated into the driving process to allow a “hands-free” and “mind-off” driving experience. According to statistics, 94% of accidents are caused by human errors. By contrast, AVs have the capability to minimize the driver error by sensing the environment and implementing safeguards.

AI can take AVs to six different levels of automation where level 0 signifies no automation and level 5 suggests full automation. Some manufacturers have made cars qualified as level 4 AVs in certain scenarios.

Firstly, the application of AI can shorten the discovery timelines and reduce the costs by enabling an automated and fast pharmaceutical data analysis process. Secondly, AI gives freer rein to exploration of novel drugs with new targets by integrating the prediction of target 3D protein structure and safety and efficacy of drugs.

Over the past few years, many China-based AI drug discovery companies emerged and have seen rapid development. 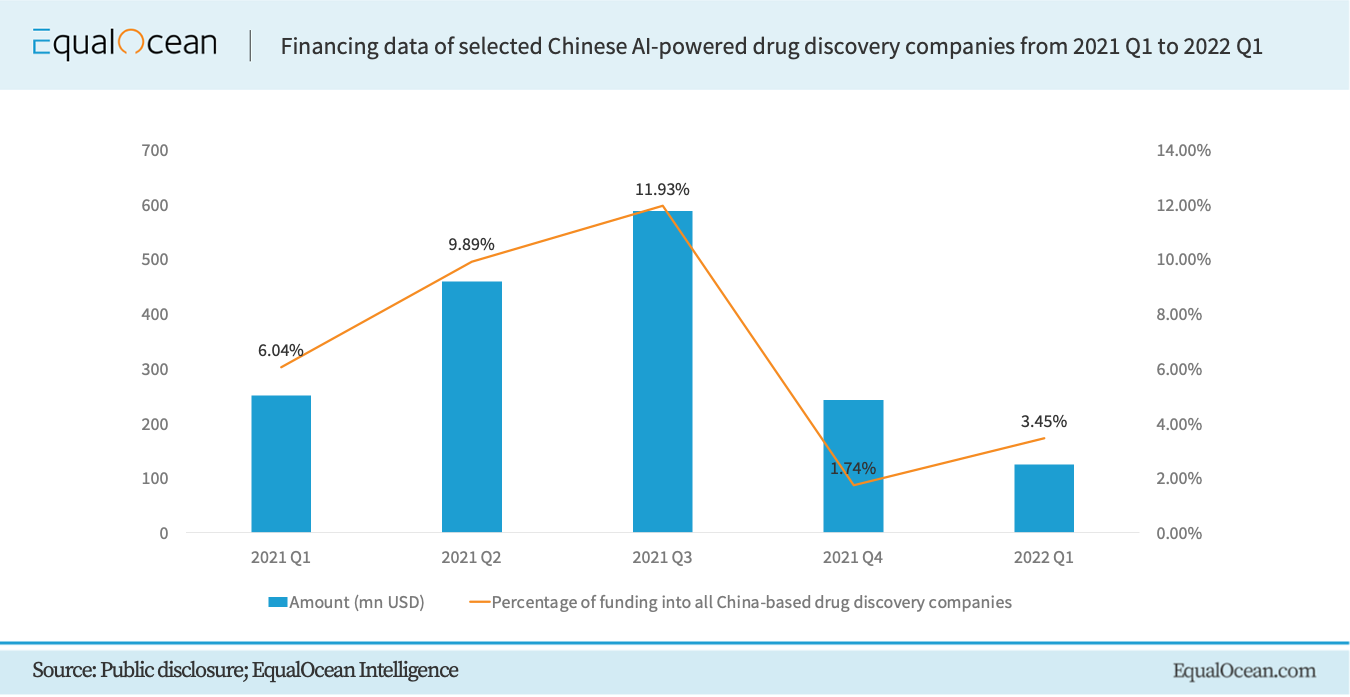 From 2021 to the first quarter of 2022, 51 financing events took place in China’s AI drug discovery sector, which raised at least USD 1.66 billion. The largest round was capped at USD 400 million, closed by XtalPi from the Series D financing round. It was followed by USD 225 million raised by Insilico Medicine and USD 100 million netted by StoneWise.

As venture funds are pouring a large amount of money into the AI-powered drug discovery industry, AI-powered product pipelines have also been significantly advanced. 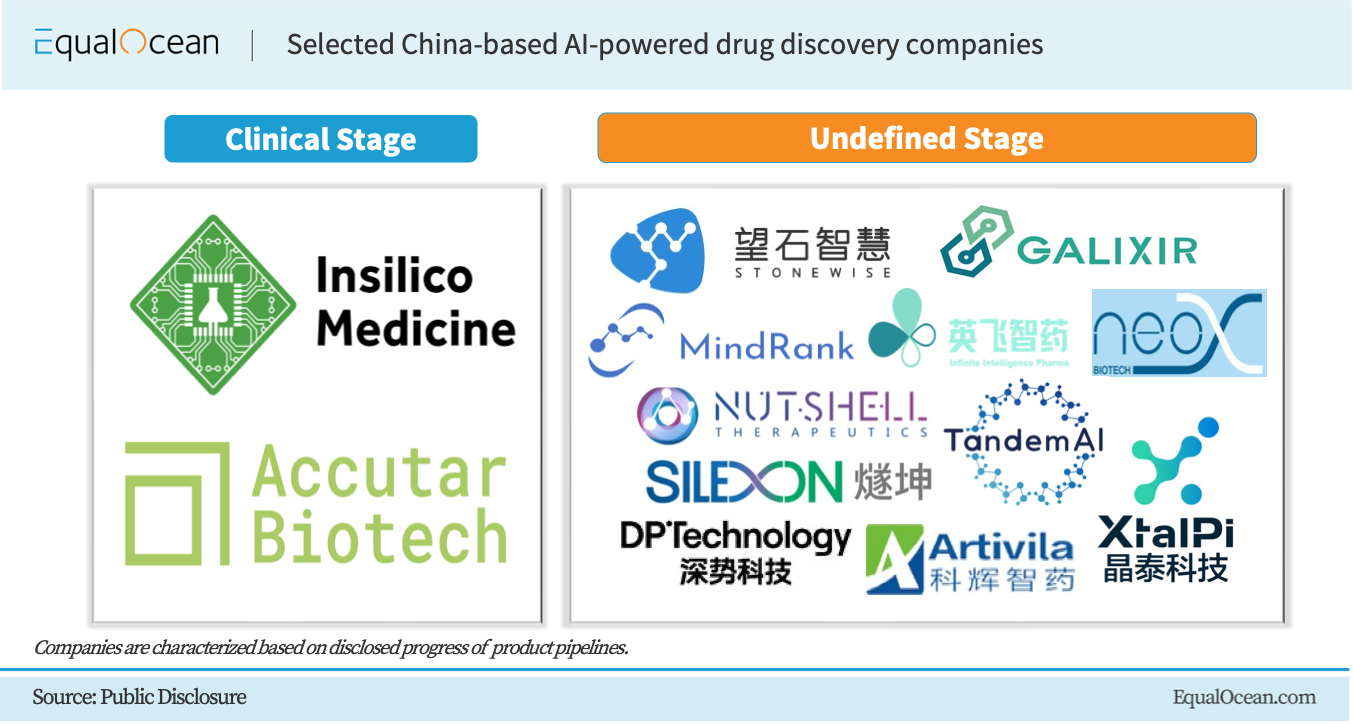 The most significant progress was made by Insilico Medicine. ISM001-055, a small molecule inhibitor with novel targets and chemical structures for the indication of idiopathic pulmonary fibrosis (IPF), was developed from scratch through Insilico’s proprietary platform, Pharma.AI. ISM001-055 later entered Phase I clinical trial both in China and overseas, making Insilico the first China-based AI-powered drug discovery company with clinical trials conducted in China. Meanwhile, since 2021, Insilico has nominated eight Preclinical Candidates for a variety of indications including inflammatory diseases, cancers and the coronavirus, which further showed the strong applicability and scalability of its platforms.

StoneWise, headquartered in Beijing, China, has also reached various partnership agreements with domestic and overseas pharma and biotech companies. Its multiple product pipelines have been proceeded into preclinical candidate (PCC) stage, according to a reliable source. In April this year, it published an article on exploring the protein-ligand interaction based on AI and Experimental Electron Density as the title page on JCIM (Journal of Chemical Information and Modelling), which does not only show the power of AI in processing pharmaceutical data but also shows StoneWise’s advanced exploration of the application of AI in drug discovery and solutions to accelerate such application.

MindRank AI, headquartered in Hangzhou, China, announced that MDR001, a potential Best-In-Class drug targeting Class B GPCR (G-protein-coupled receptor) for chronic diseases and designed via Molecule Pro, its own proprietary platform, entered IND-Enabling study stage eight months after the project initiation in May 2021.

Although the actual effect of AI-based drugs has not been seen and tested in the market worldwide, the contribution that AI makes to the pharmaceutical industry is non-negligible.

In the latest 14th Five-Year Plan (2021-2025) for bioeconomy unveiled by the National Development and Reform Commission (NDRC) of China, Information Technology (IT)-aided novel drug development was highlighted as one of the prime areas to tap for development. This top national document emphasizes how IT such as big data and AI can accelerate the practical translation of pharmaceutical research and advance the development of novel drugs.

The end of science is technology.

Nevertheless, with the distinct merit of shortening the discovery timeline, AI-powered drug discovery holds huge potential to help novel drugs in China leapfrog the gap caused by historical regulatory protocol and dash to the top.