This article discusses Robotaxi’s market size forecasting, commercialization barriers, relevant government policies and regulations, and the analysis of major players in China market. Also, the article includes some insights from Robotaxi executives and its supplier. 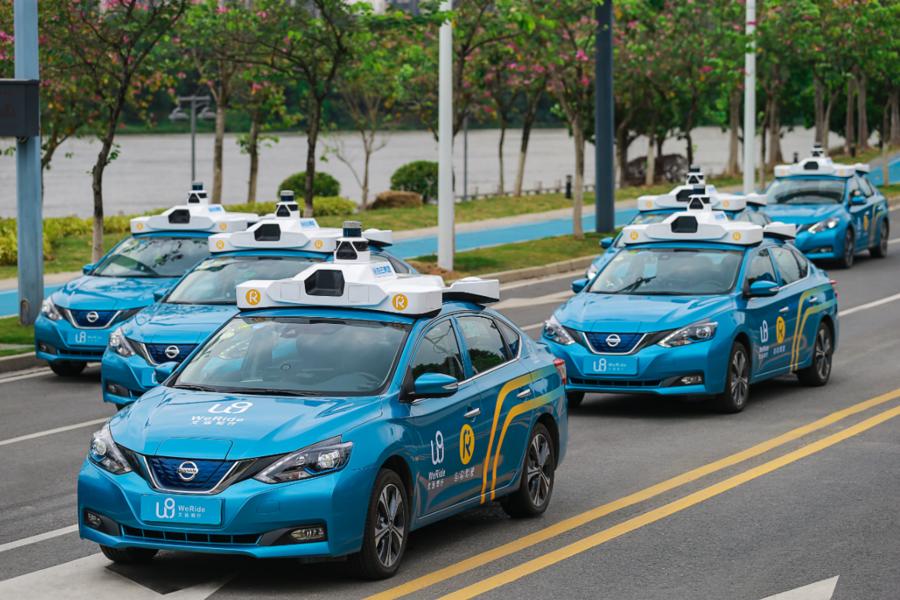 Robotaxi is an autonomous taxi company that is operated through a shared, on-demand model. It uses L4-L5 autonomous vehicles, according to SAE. It seeks to be a substitution for ride-hailing and normal taxis. However, Robotaxi is facing some challenges related to commercialization and mass production.

The Forecasting of Robotaxi in China’s Market

The figure above shows the penetration rate of Robotaxi compared to ride-hailing and taxis leading up to the end of 2023, which is the culmination of ‘Robotaxi 1.0’. During the first stage, the Robotaxi vehicle must operate within limited speed parameters and place restrictions; also the rules require Robotaxi to operate during the daytime. For example, the pilot services are currently confined within a designated area of 60sqkm in Yizhuang in south-eastern Beijing, home to approximately 300,000 residents. To date, the services are free to the public.

The second stage will be Robotaxi 2.0. This covers the years from 2024 to 2027, and the penetration rate of Robotaxi compared to ride-hailing and taxi is expected to increase from 15% to 22%. Meanwhile, the market size will increase to CNY 139 billion (USD 20.8 billion). Moreover, the limitations on Robotaxi vehicles will be loosened. It is likely that the cars will be able to operate during daylight hours and the territory for Robotaxi operating will be expanded.

During the years 2028 to 2030, we will see the stage of Robotaxi 3.0, allowing vehicles to run on some complicated roads. According to the forecasting, the market size of Robotaxi in 2030 will reach CNY 350 billion (USD 52.3 billion) and the penetration rate of Robotaxi will grow to 55%.

Barriers and Opportunities of Robotaxi

The major barriers to growth for Robotaxi include regulations, acceptance of clients and technological limitations. Meanwhile, the high cost of Robotaxi is a barrier to mass production as well.

Leo Wang Haojun, COO of Pony.ai and Head of Pony.ai Shanghai R&D Center, accepted EqualOcean's exclusive interview. He told us that the company achieved great technological progress over the past few years - key tech indicators and the riding experience with Pony.ai Robotaxi have improved significantly. However, for the industry, Robotaxi companies still need to tackle multiple challenges to achieve mass production, such as hardware costs. Also, the commercialization of real driverless Robotaxi is another goal for Pony.ai and the industry. With further opening-up in Robotaxi related policies, business model innovation and better user acceptance, Robotaxi will likely be deployed on a bigger scale in China soon.

Maxwell Zhou, the CEO and founder of DeepRoute.ai told EqualOcean that “broadly speaking, mass production of Robotaxis and consumer vehicles requires collaborative efforts from 3 dimensions, the first is the prerequisites that includes automotive grade sensors, chips, and maps. Second, algorithm & tool-chain. Third, is the vehicle platform. So, by connecting these 3 dimensions, we can draw a complete picture of the mass production of L4 autonomous vehicles.

RoboSense (Chinese: 速腾聚创), a Lidar provider, provides Lidars to Pony.ai, WeRide, DeepRoute, and so on.

Season Wang, the Vice President and partner of RoboSense, shared his thoughts about the development of Robotaxi industry. Season said that “for Robotaxi vehicles, LiDAR is a key sensor for solving the driving experience of autonomous driving. Compared with cameras and millimeter-wave radars, lidars can significantly improve the reliability of autonomous driving systems due to their long-range ranging and high angular resolution. It is generally considered by the industry as a necessity for L3 and above autonomous driving. Meanwhile, with the development of Robotaxi, as the industry gradually steps into large-scale commercialization, RoboSense is closely following the development needs of the industry due to its advance layout. With our technology maturity in solid-state LiDAR, mass production delivery strength, high performance, low-cost, product continuity and other advantages, these are the key reasons that we became the supplier of the dominating players in the Robotaxi sector.”

L4-L5 driving autonomous technology can be used in different scenes, in some particular areas such as harbors, airports, parking lots, and industrial parks; a higher level of autonomous driving technology used for logistics will be easier to realize. However, when Robotaxi runs in an open area, the driving situation will be much more complicated. Robotaxi companies will have to collect more data from road tests and lower costs to realize real unmanned autonomous driving with mass production. 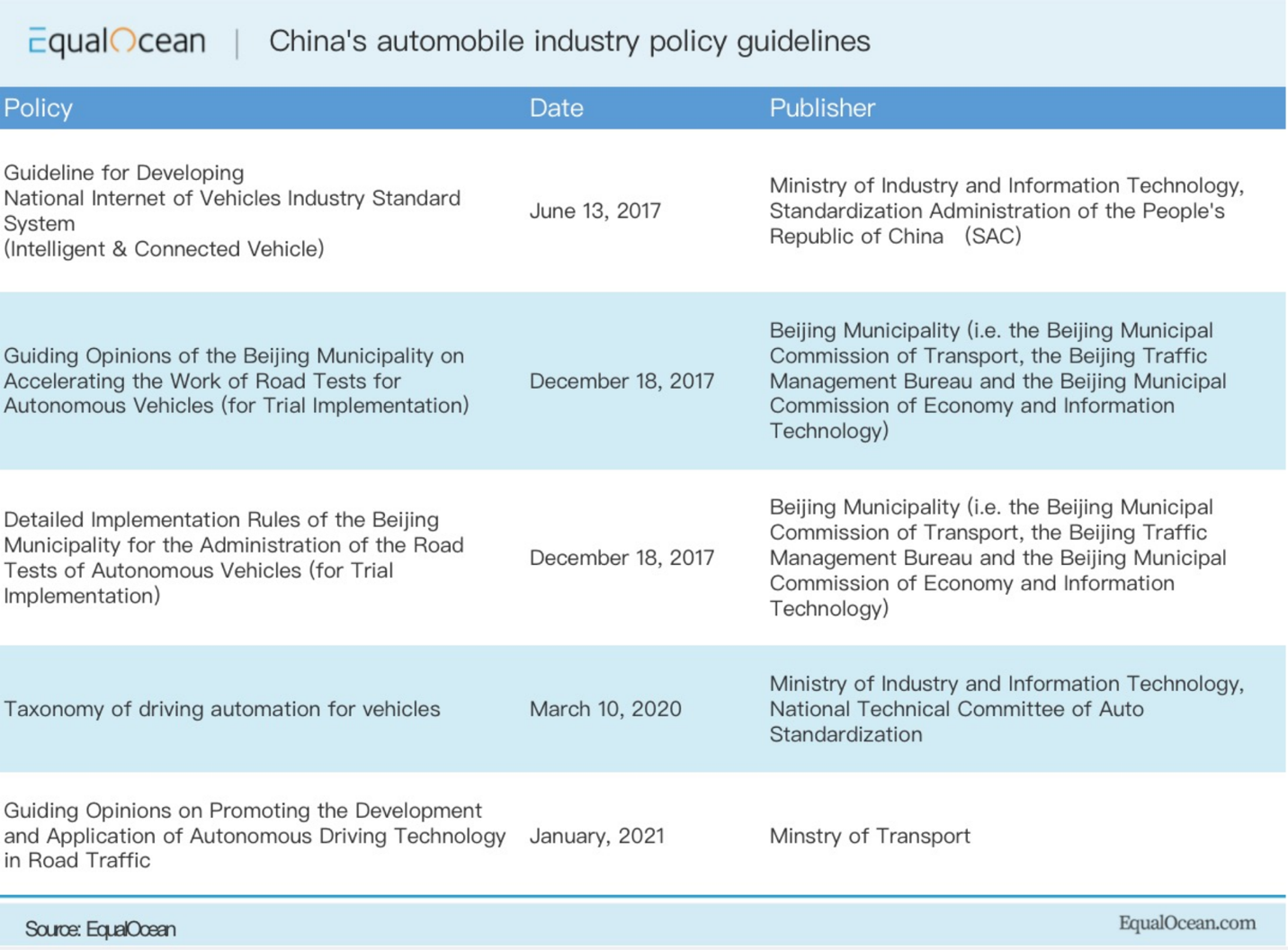 With a series of supportive policies invoked by the Chinese government in recent years, the regulations around Robotaxis are improving and step-by-step nearing completion. We can see clearly that the government has a positive attitude to the development of the Robotaxi sector.

Robotaxi is an industry with a high entry-level. In China, there are three main popular business models: operating independently, collaboratively, and in a joint venture.

For example, Pony.ai is an example of operating independently. AutoX cooperated with AutoNavi (Chinese: 高德地图) which is a Chinese web mapping, navigation, and location-based services provider, founded in 2001. For the joint venture, WeRide Robotaxi was co-founded by WeRide, Baidu Taxi Group, and SCI (Guangzhou) Group in August 2019.

SPC Model to Analyze Major Players in the Robotaxi Sector

In the above chart, it is a SPC model that developed by EqualOcean, and analyzes companies based on the strategy and shared value, customer and operating, and product and tech-driven.

It’s easier to understand product & tech-driven and customer & operating sides, but when we analyze the strategy & shared value, we need to take the company’s valuation, market share, vision, values, backgrounds of the founder, core team, and its investors into consideration.

Apollo is in the core area, and the Baidu Apollo project is a Robotaxi company that is developed by Baidu. Based on the Lubo Kuaipao (Chinese: 萝卜快跑), a robotaxi platform which was founded by Baidu, the company completed road tests totaling 25 million kilometers (Mileage: 15.53 million) and averaged 28 on a single day. Moreover, the company is operating in 9 cities including the four biggest cities in China. All in all, Apollo is leading the Robotaxi industry, and it meets all three factors which are the S, P, and C.

Companies in the secondary area are Challengers to Apollo, Pony.ai and WeRide are strengthening in Strategy & Shared Value, also they are good at on product& Tech-driven and Customer & Operating, they are the most potential companies to challenge to Apollo. Notably, Pony.ai’s road testing distance has more than 9 million Kilometers, and the company provides Robotaxi services in both China and the United States.  Moreover, WeRide is not only focusing on Robotaxi but also cooperating with BOSCH on the development of SAE L2-L3 autonomous driving technologies.

In the edge area, companies are more like followers. UISEE and QCRAFT are not mainly developing Robotaxi, their businesses involve in part of Robotaxi.

As autonomous driving develops across the world, China, and the United States are the countries that are leading the Robotaxi industry. Robotaxi vehicles are running in Beijing, Shanghai, Guangzhou, and Shenzhen which means that – regarding the development of technology and policy support – China is not playing the role of the follower but a pioneer. EqualOcean believes that China’s Robotaxi market size can be expected to grow to CNY 1.5 trillion eventually, and the market size of the autonomous driving technology for logistics will be double that of Robotaxi.