Editor’s note: As the consequences of climate change are increasingly felt, carbon neutrality has evolved from a noble goal to an urgent global mission which entails arduous efforts from both the public and private sectors, especially support from low-carbon tech companies. We at EqualOcean selected 30 Chinese players in this field for your reference. 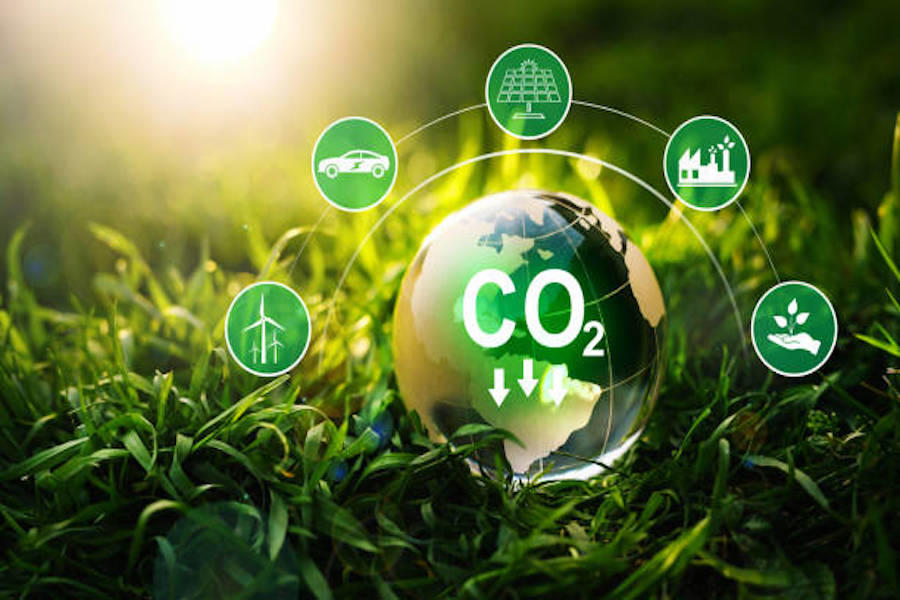 In the previous article, we had a glimpse of rising low-carbon tech companies on three tracks, energy storage, CCUS technology, and hydrogen energy. For the second half of the list of 30 noteworthy companies, we are going to check players focusing on renewable energy, green architecture and carbon footprint assessment.

China’s total renewable energy consumption is set to reach about 1 billion tonnes of standard coal equivalent (TCE) by 2025, as the country bids to raise the share of non-fossil fuels in total energy use to 20%. Competition in this segment is heating up.

GCL·Perovskite (Chinese：协鑫光电), a developer and manufacturer of perovskite solar modules and large-scale solar modules, harvested hundreds of millions of CNY in the Series B round in May 2022, led by Tencent, with Lighthouse Capital as its financial advisor. The money will be devoted to the construction of a 100 MW mass production line of perovskite modules.

The company focuses on improving the photoelectric conversion efficiency of perovskite cells and reducing the cost of solar cells, trying to solve the problems of solar power and make clean energy the mainstream of the energy market.

UtmoLight has employed the world-famous perovskite scientist Mohammad Khaja Nazeeruddin as the chief scientist and established an R&D team consisting of excellent talents from top universities at home and abroad.

Established on February 16, 2022, Infi Solar (Chinese: 无限光能), a newcomer in the perovskite solar cell industry, received tens of millions of CNY in the angel round from Glory Ventures, Vlight Capital, and Country Garden Venture Capital in June 2022.

The proceeds will be used for its expansion of R&D, to build test lines for large-size perovskite solar cells and to prepare for mass production.

Established in August 2016, Wonder Solar (Chinese: 万度光能) is a spin-off from Huazhong University of Science and Technology engaged in the development and production of emerging solar cells based on printing technology.

In August 2021, Wonder Solar announced it would invest CNY 6 billion to build a 10GW production base for perovskite PV cells in the Gedian Economic and Technical Development Zone in Ezhou City of Hubei Province, China.

Established in 2017, Yaoneng Technology (Chinese: 曜能科技) bagged tens of millions of CNY in 2018 from the special climate change investment team of Hillhouse Capital.

The company develops perovskite photovoltaic technology that is integrated with crystalline silicon technology to break through the industrial photovoltaic conversion efficiency limit of traditional single-junction solar cells and further reduce the cost of photovoltaic power generation. 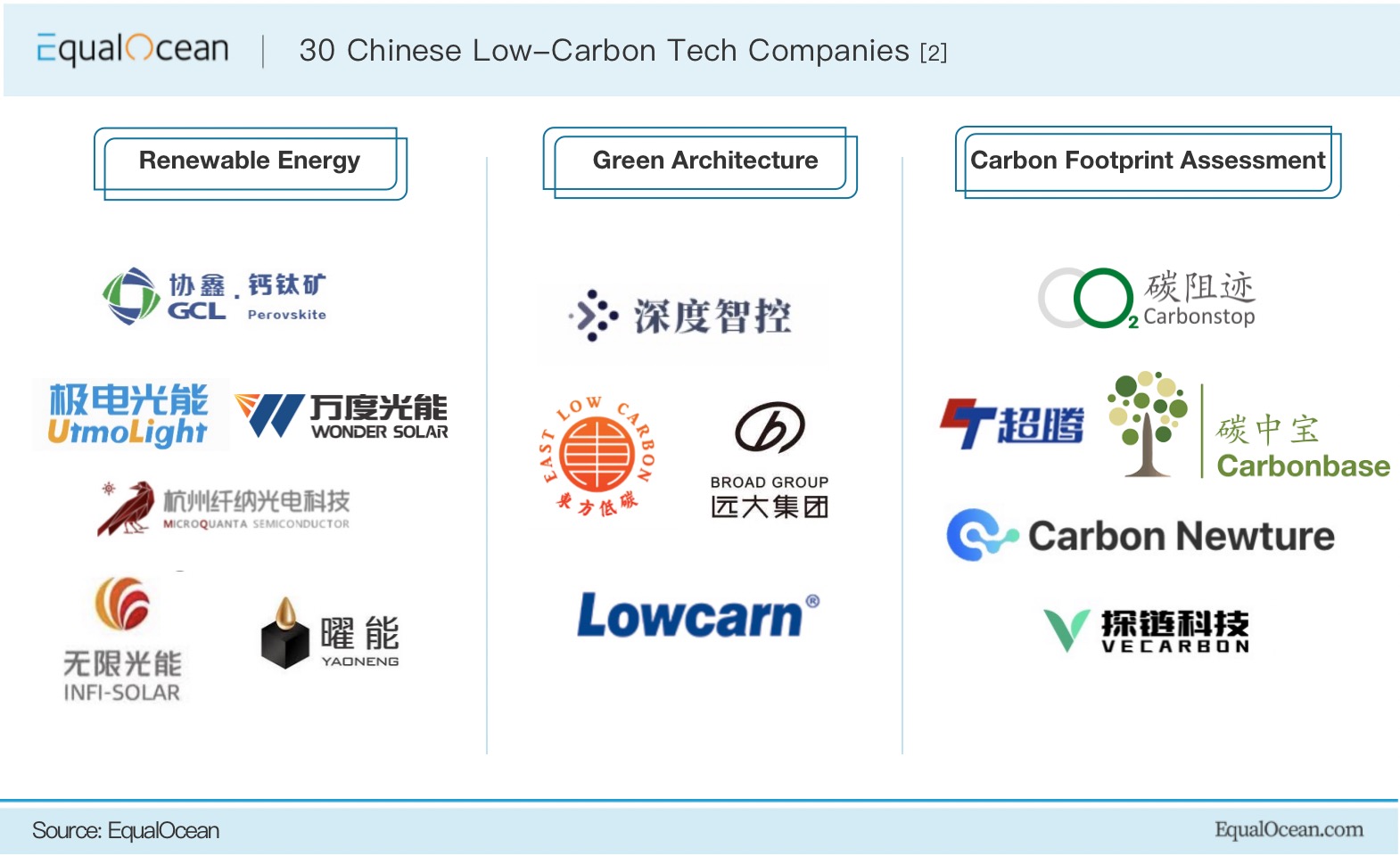 As the net-zero trend kicks into high gear, building emissions have come into the spotlight as a major concern. The building sector accounts for 38% of global energy-related CO2 emissions. Chinese policymakers have also made advancing green building construction and renovation a top priority in order to realize carbon goals.

East low carbon specializes in intelligent energy-efficiency management solutions, with intelligent IoT and energy-saving technology as its core, and is committed to driving the green and intelligent transformation of buildings and industries with innovative technology.

DeepCtrls aims to lower the carbon emissions of air-conditioning systems with its IoT energy management/monitoring system that requires little to no coding experience to use, reducing the cost and improving efficiency for companies in various industries.

BROAD Group (Chinese:远大科技) is a privately-owned enterprise with the mission to protect the earth with innovative, energy-efficient & durable proprietary technologies. It has several subsidiaries specializing in green architecture-related fields, such as BROAD Nearly Zero Energy Building and BROAD Energy Service.

Companies all over the world are beginning to measure and report their carbon footprint to stakeholders and are using the findings to inform their sustainability actions, giving birth to an emerging market of carbon footprint assessment services.

Its founder, Luhui Yan, is a committee member of the UN IPCC Fifth Assessment Report and a member of the Carbon Disclosure Project Technical Experts. The company has developed carbon management software CAMP (Carbon Accounting and Management Platform) and got more than 10 software copyright.

Established in 2020, Carbonbase (Chinese:碳中宝) focuses on sustainable finance and blockchain-backed technologies to calculate, track, trade and offset carbon emissions. It received millions of USD in the Angel round in 2021 from several investors like Abraham Fund, ChinaRock Capital Management, MiraclePlus.

Carbonbase is a climate change fintech platform helping and incentivizing individuals, businesses, and other organizations to understand their carbon footprint, reduce emissions, and co-create a better planet.

Established in 2021, CarbonNewture (Chinese: 碳衡科技) pocketed tens of millions of CNY in the Angle round, led by SIP Oriza Seed Fund Management in February 2022. In August 2021, it also received investment in the Seed round from Wangyuan, cofounder of Ele.me.

CarbonNewture is a startup aiming to provide corporates with comprehensive digital transformation solutions through technologies such as the IoT, big data, artificial intelligence and blockchain.

Established in 2021, Vecarbon (Chinese: 探链科技) raised millions of CNY in the Angel round only three months after it was founded. Now the company’s valuation has surpassed CNY 30 million.

It is a core member of the Carbon Neutrality Alliance of Shanghai Environment and Energy Exchange and a record member of the United Nations Climate Chain Coalition.

Amid high uncertainties in the post-pandemic era, it would be nothing short of a momentous endeavor for the international community to reach goals in the near term and eventually achieve net zero by 2050. In this arduous journey, low-carbon technologies will play a key role in accelerating the green transition.

According to the Roadmap for Financing China’s Carbon Neutrality issued by the Green Finance Committee of the China Society for Finance and Banking (GFC), in the next three decades, China's cumulative demand for green and low-carbon investment in the next three decades will reach CNY 487 trillion (USD 76.17 trillion). Low-carbon technologies are sure to be the darling of investors.