AI in Drug Discovery in China, Hype or Hope?

There have been many controversial discussions about the application of AI in the drug discovery. Someone thinks it is just a 'flash' while others believe it does or will make great clinical contributions to the drug discovery from various aspects in the long run. This article will dive deeply into ‘AI in drug discovery' from a technological side, and give you some ideas about whether it is being hype or great hope in China. 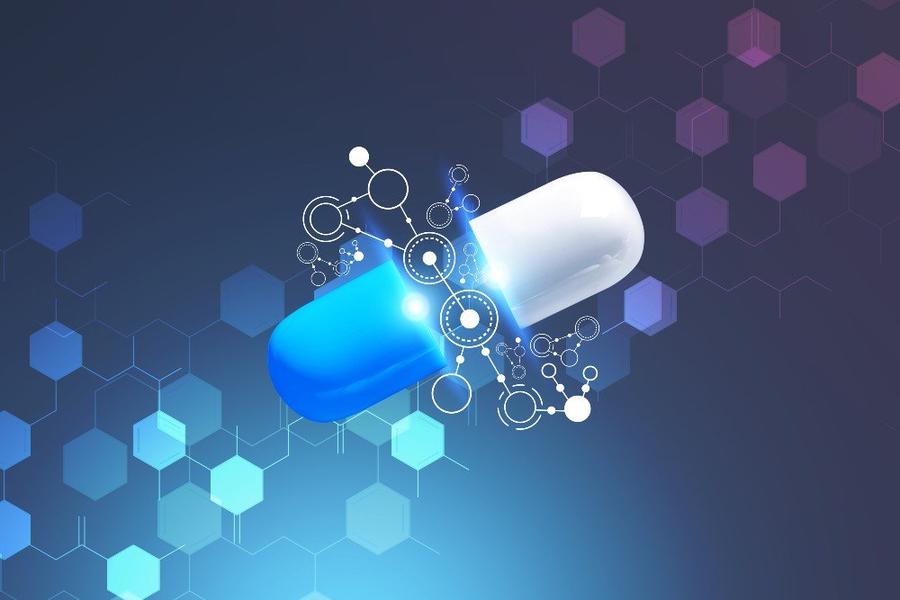 Artificial intelligence (AI) is not new to China’s healthcare sector.

China started exploring the application of AI in medical imaging more than 20 years ago. AI in medical imaging can assist doctors not only in the early screening of diseases but also the monitoring of treatment, leveraging its advantages in automatic recognition of complex patterns in imaging data and quantitative assessments of radiographic characteristics.

AI in China recently began to be used experimentally in drug discovery, with the trend speeding up during the pandemic. With the assistance of AI, Chinese scientists successfully uncovered the protein structure of the coronavirus and human-virus interactions within six months, which greatly accelerated the development of drug discovery.

How is AI implemented in drug discovery?

Drug discovery starts with target identification, where possible genes or proteins and their molecular mechanisms are intensively explored. A drugabble target needs to show direct relevance to the disease phenotype and be amenable to therapeutic modulation.

AI algorithms can also stimulate the condition that the target would bound by the desirable molecules. “AI can quickly learn a large amount of medical data and derive personalized models for specific targets,” Zhou Jielong, the founder of StoneWise told EqualOcean. Based on the prediction models, scientists could understand the availability of the target much easier and better.

After locating the target, a screening campaign is commenced to construct a library of chemical compounds that interact with the target of interest. Those compounds are called hits. AI also plays a vital role in enhancing the efficiency and accuracy of virtual screening (VS) and high-throughout screening (HTS) by predicting toxicity, bioactivity and physicochemical properties of compounds.

The most promising ‘hits’ molecules will be further refined to be more potent and selective.  Those optimized compounds with better pharmacokinetic properties are called leads.

In the process of Hit-to-Lead optimization, AI can be used to predict physio-chemical and ADMET (absorption, distribution, metabolism, excretion and toxicity) characteristics in silico and to evaluate whether a drug compound would work in animal models and other scenarios.

The most high-quality leads will be taken further to the preclinical tests, namely preclinical candidates (PCC). Besides alleviating the need for animal testing on some levels, AI-enabled modeling can also give a better idea of how a drug will react in the human body rather than seeing how animals react and hoping the same effect will translate in humans. This will bring vast benefits to the candidate selection process, considering almost 90% of drugs that show promise in animal research fail to be safe or effective for humans.

Before conducting clinical trials in humans, AI-powered in silico trials can incorporate different parameters such as disease, age and sex at a time or in different combinatinos to test the potential effectiveness of a drug candidate among thousands of virtual patients. This will give scientists tremendous support to refine the experimental design of the actual trials. 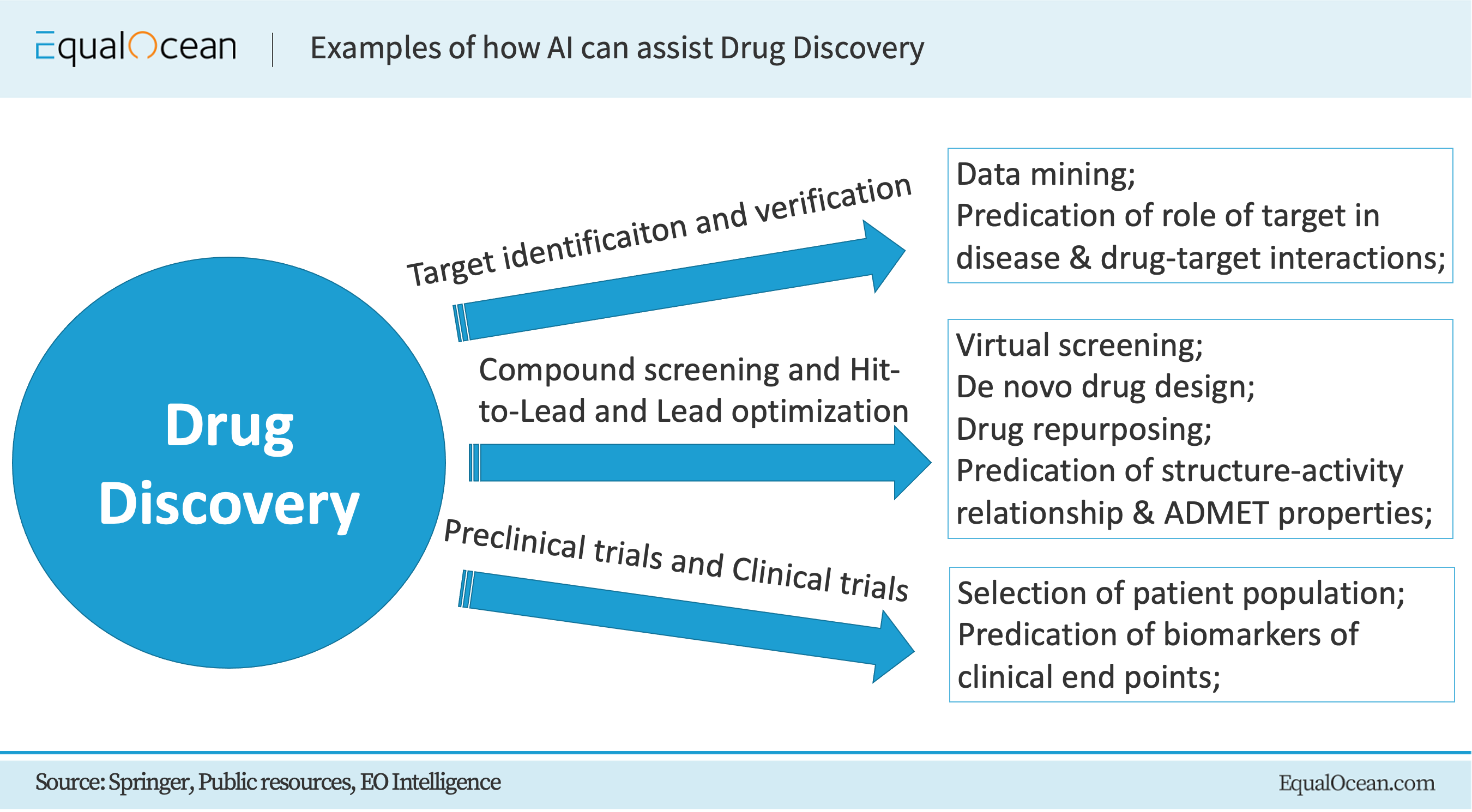 Except for druggable targets, AI can also research ‘undruggable’ targets which are difficult-to-drug or yet-to-be-drugged. AI is the key to facilitating automated novel de novo drug design (DNDD) which refers to the design of novel chemical entities that fit a set of constraints using computational growth algorithms. With DNDD, one can generate novel molecular entities without a starting template.

Is data the bottleneck of AI in drug discovery in China?

AI-based approaches are data-driven. “Drug discovery and development is a data-intensive industry,” Zhou Jielong, the founder of StoneWise said.

The algorithms deployed to assist or guide drug discovery need to be trained on large sets of data before working to generate desired products.

Besides sourcing data from literature and large public databases such as ChEMBL and PubChem, AI-powered drug discovery companies also gain data through industrial and academic collaborations and build their own proprietary databases. The experimental data obtained through collaborations will further enhance the performance of algorithms, forming an iterative feedback loop.

Data plays an important role in mentoring and improving AI algorithms, however, not all data are valuable. Among available data, there are dirty data such as skewed data sets and biased data. In such cases, scientists need to explain to the algorithms and give the right direction. Having a clear understanding of the data quality and appriopriate data selection criteria beforehand are essential to deal with the data hygiene issue.

Therefore, data itself cannot simply bottleneck AI in drug discovery but valuable data does matter. Meanwhile, scientist intervention is needed and capable of guiding on solving any possible data-related bottlenecks. However, experimental validation of AI algorithms is a completely different scenario.

“Unlike in other areas where AI generates pictures, music or text, you get validation almost immediately because you get almost immediate feedback by looking at the picture, listening to music and reading the text. In biology, it is not like that and you have to wait,” Alex Zhavoronkov, the founder of Insilico Medicine told EqualOcean.

The validation of AI in drug disocovery is impeded by two aspects in general.

Firstly, there is no universal protocol to follow about what validation is right, in another way to say, there is no standard in parallel when AI delivers new compounds.

The second pitfall lies in the progress of validation itself.

The algorithm used to generate the goal compounds are derived from relevant data. Its numerical performance and the prospective perfomance of the data set used to evaluate the method are intrinsically related. Therefore, it is hard to evaluate the real prospective performance of the models or methods. Simply to say, the so-called validation could just be replication of the construction process, in which case, the diversification of domains being involved have to be carefully chosen and emphasized in the validation process.

Therefore, scientists need to lead their own way to validate AI algorithms or AI-generated molecules, leveraging their expertise. Wet-lab experiments, biological assays and clinical trials are also needed to ensure the generated molecules are active both in vivo and in vitro.

“We have two trillion dollars’ worth of data, probably the most among all AI-powered drug discovery companies,” Alex said, The company tracked data generated from research spending of two trillion dollars. “I think the bottleneck of AI in drug discovery is the validation. Validation of AI-generated molecoles and especially AI-discovered targets are extremely expensive and also very lengthy processes.”

AI tools are indispensable in comprehensively assessing and processing the growing amount of data, however, drug discovery aims ultimately to deliver better treatment for patients. No matter what kind of high-end technolgy is used to improve and accelerate the process, the ultimate product delivered is what matters. A huge conflict exists between ways scientific progress is evaluated in publications, and what matters in a real-world scenario. 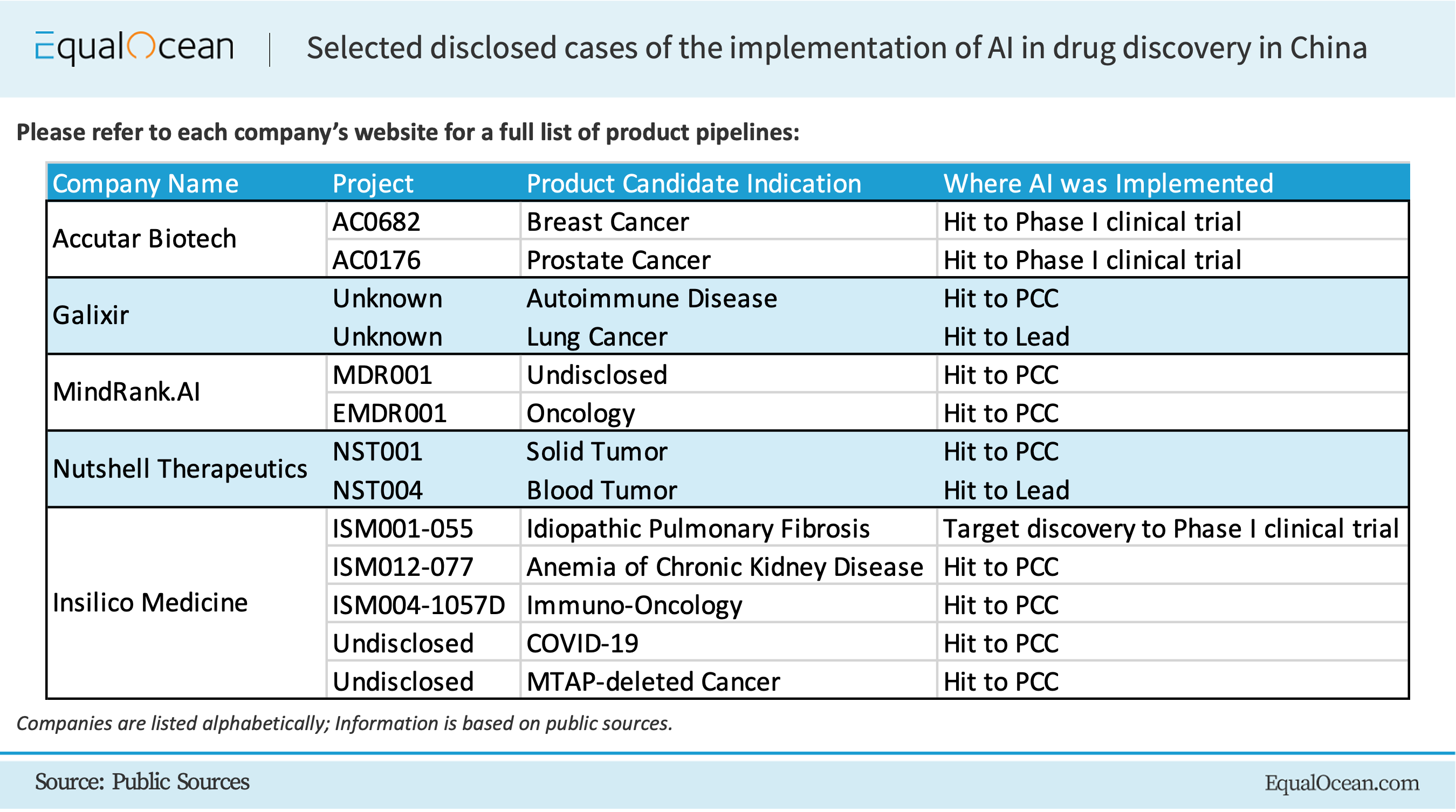 Not being bottlenecked by data and with continuous efforts made for the validation process, those AI-enabled drug discovery companies will be driven to a higher level.

What is the core value of AI in drug discovery in China?

However, there can be several keys to one lock. The best key obviously will own more popularity.

Novel drugs can be generally divided into two categories: first-in-class and follow-on drugs. Both of them are protected by legal patents for a set period of time.

First-in-class drugs, as the name implies, are compounds acting on a specific and new target to be marketed. They have novel and unique mechanism of action to treat a medical condition.

Follow-on drugs act on the same target as the first-in-class compound. They offer an improvement on the efficacy of the prototype with less adverse effects. They are marketed as additional options within the same class of drugs for patients. Follow-on drugs can be further sub-categorized into classes such as me-too, me-bette and best-in-class drugs depending on the level of efficacy in comparision to the first-in-class.

In China, referring to the registration classification of chemical drugs issued by National Medical Products Administration (NMPA), first-in-class drugs that have not been marketed in China or overseas, are deemed as class 1 drugs. Follow-on drugs are either class 1 or class 2 drugs, depending on the improvement or modification in comparison to the first one.

First-in-class drugs have much higher commercial value as they enjoy the privilege of pricing and a period of market exclusivity free of competition from similar drugs. By contrast, follow-on drugs that are centered on a more validated target will face immediate competition upon approval. 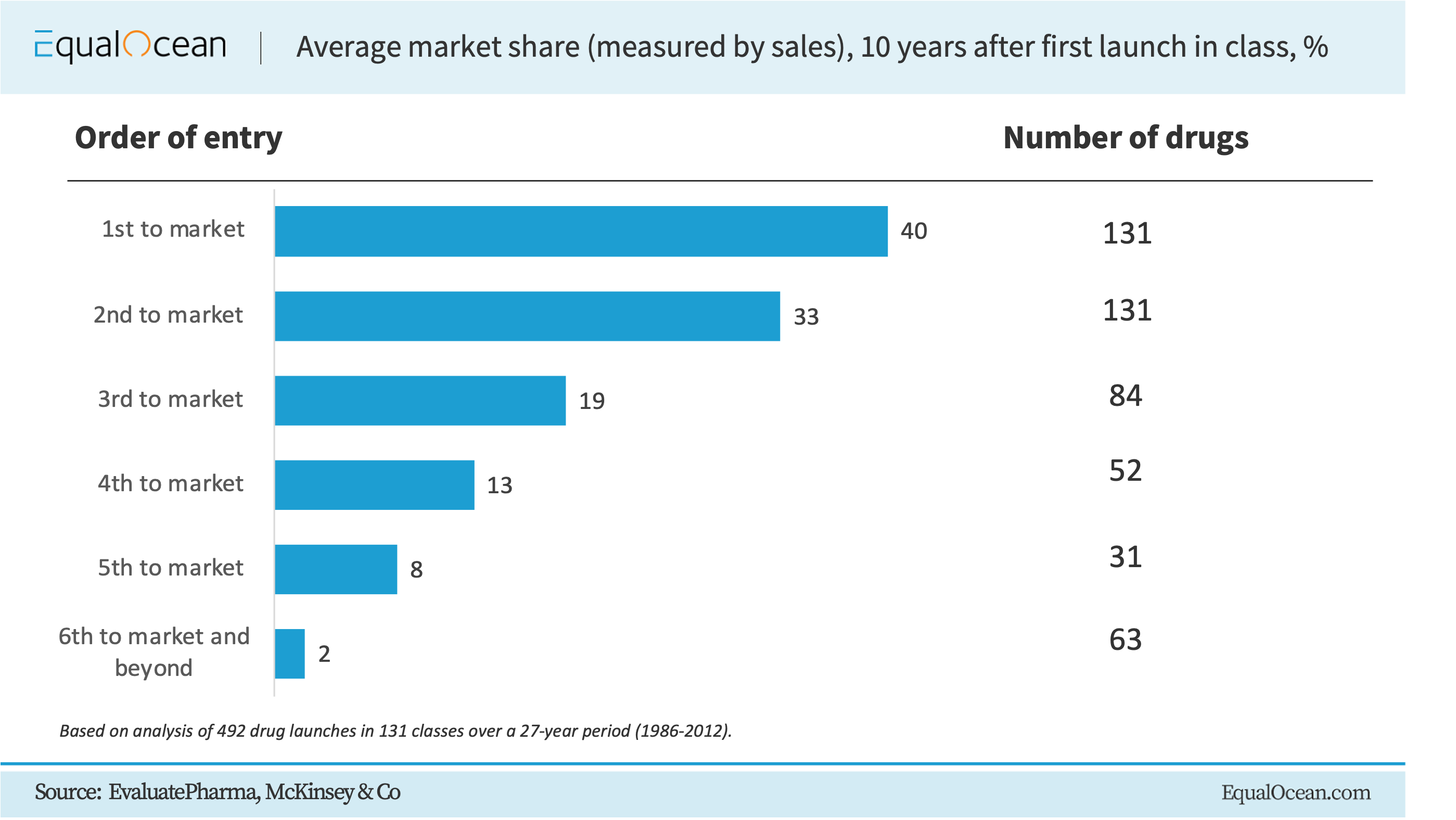 Target discovery lies at the heart of developing first-in-class drugs. Insufficient validation of drug targets at an early stage will lead to costly clinical failures and low drug approval rates.

The advent of AI in drug discovery, through efficiently exploring the potential of large amount of pharmaceutical data and constructing prediction models, gives much more opportunities on researching first-in-class drug targets.

90% of novel drugs research that Chinese biotech companies are doing are about follow-on drugs which is mainly based on previous research. Thus, a successful case of first-in-class drug discovery and development will make a drugmaker stand out by winning wide recognition and driving large volume of sales.

Focusing on developing first-in-class drugs will not only show the core value of drug discovery, but also make the AI-aided drug discovery companies more representative in the whole industry, thereby driving the whole image of China’s drug making upwards.

“Universal AI target discoverey is the future. I value universal algorithm that can solve target discovery and novel medicincal chemistry at the same time,” Alex Zhavoronkov, the founder of Insilico Medicine said in a statement.