Robots Moving in Warehouses: A Market Ready to Boom

China's rapidly growing logistics industry has fueled the rise of warehousing with huge market demand. Influenced by the labor shortage, coupled with strong e-commerce growth, smart warehousing is about to enjoy a higher strategic status, in which mobile robots, including automatic guided vehicles (AGVs) and autonomous mobile robots (AMRs), play an indispensable role. 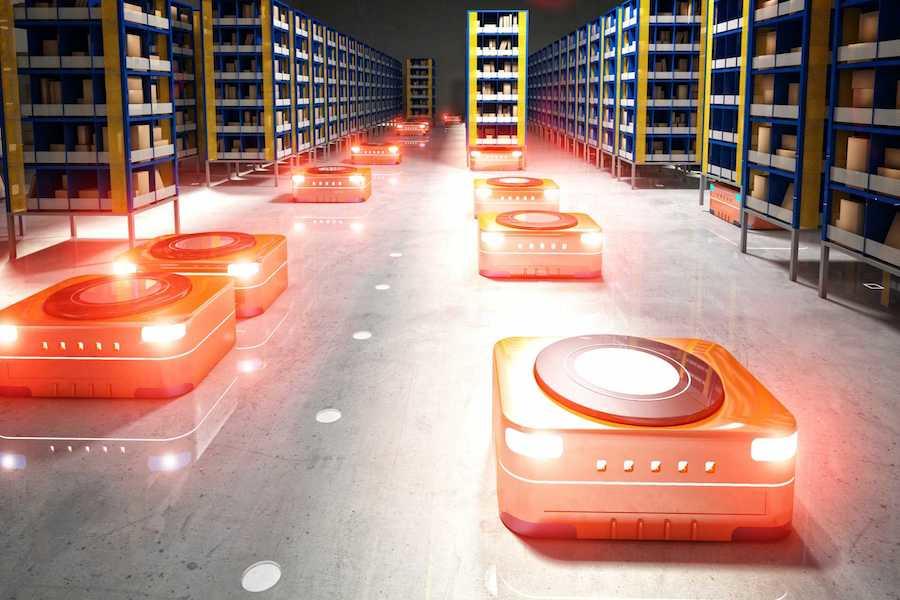 In recent years, as information technology transformed commodity logistics, ‘internet plus’ commodity logistics has kicked into high gear. In this backdrop, smart warehousing, the culmination of warehouse automation, has come under the spotlight and is playing an increasingly important role in improving the speed and efficiency of the delivery of goods.

New players are flocking into this segment. According to third-party statistics, there were 60,000 warehousing companies in China in 2018, growing from 16,700 in 2010, with a compound annual growth rate of 17.37%. Up till now, there are 206,900 companies registered with businesses related to smart warehousing on Qcc.com (Chinese: 企查查), a major Chinese enterprises information searching platform. It’s safe to say that smart warehousing is a big trend and a thriving market in China.

As logistics and express companies dip their toes into the capital market and place more value on transport capacity, intelligent processing and investment in information technology, all their efforts culminate in deploying smart warehousing and, at present, the integration of warehousing and distribution has become the mainstream of warehouse logistics.

Sales of mobile robots are rising up

When talking about smart warehousing, it can by no means be ‘smart’ without helpful mobile robots. Naturally, robotic technology has grown into a key driver of the industry and come to companies’ help in various commercial and industrial scenarios. It might sound futuristic that robots move around the warehouse, pick, transport and sort items within manufacturing and distribution facilities without any manual intervention, but it is sure to be a new reality in China.

With the rapid growth of e-commerce and the rising costs of labor, the domestic warehousing industry is turning to automated equipment. One prominent example is that Chinese e-commerce giants like JD.com(Chinese: 京东) and Alibaba (Chinese: 阿里巴巴) are striving to build an intelligent logistics system by deploying robots in warehouses to enhance work efficiency and manage the increased workload.

After years of technical build-up, China’s logistics robots are now entering the stage of large-scale commercial use. At the same time, growing appetite from the market is making mobile robot sales poised for a large increase. 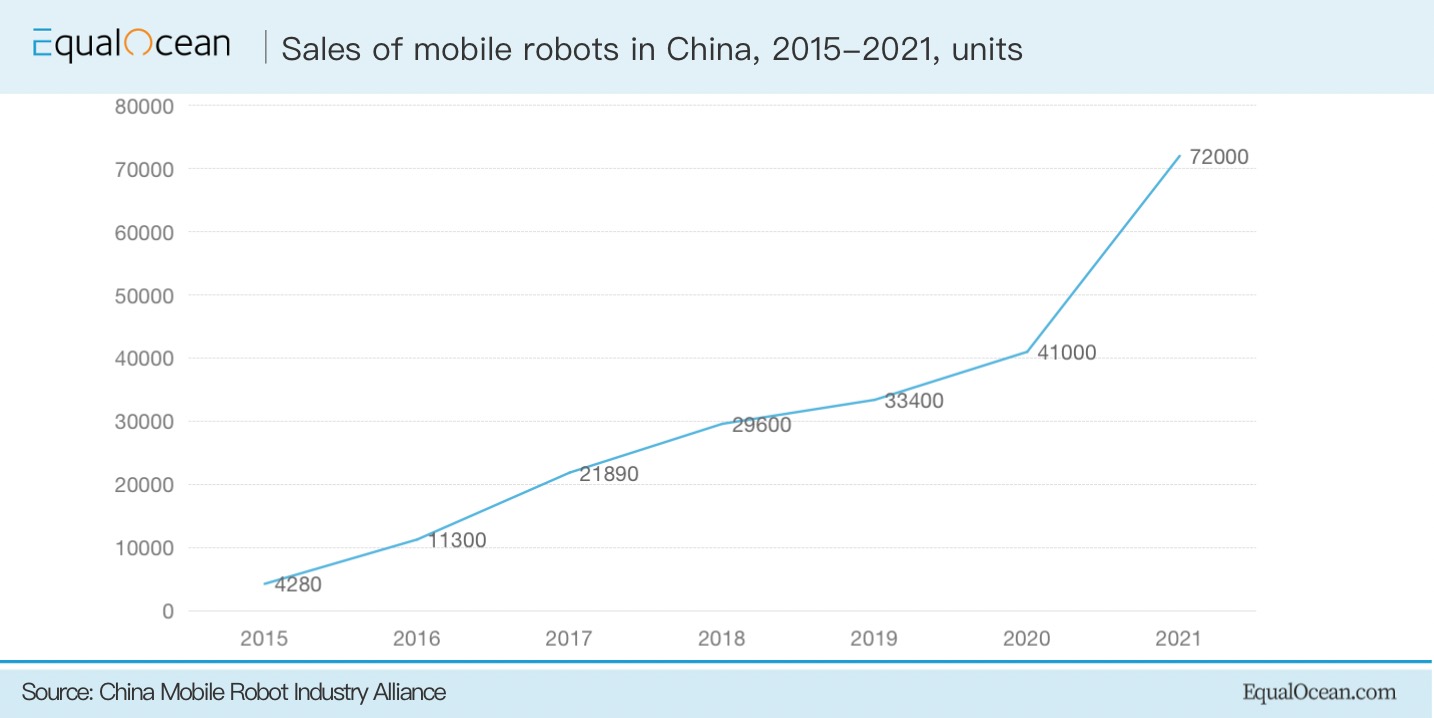 As mobile robots are more and more welcomed in various commercial and industrial settings and new players swarm into this blue ocean market, investors are closely eyeing the booming sector and ready to lash out at any promising Chinese company in hope of acquiring an early toehold in the future. Domestic robotic companies are benefiting from a significant increase in funds in recent years.

Quicktron told EqualOcean that they believe in five years, there are going to be three Chinese players among the global top four in mobile robots considering no European or American big names in the field are specializing in this segment. Instead, foreign counterparts usually focus on applications, taking mobile robots merely as part of the tools to fit in the scenarios, which will certainly give Chinese companies that have more advanced technologies and abundant experience a leg up in the global competition. 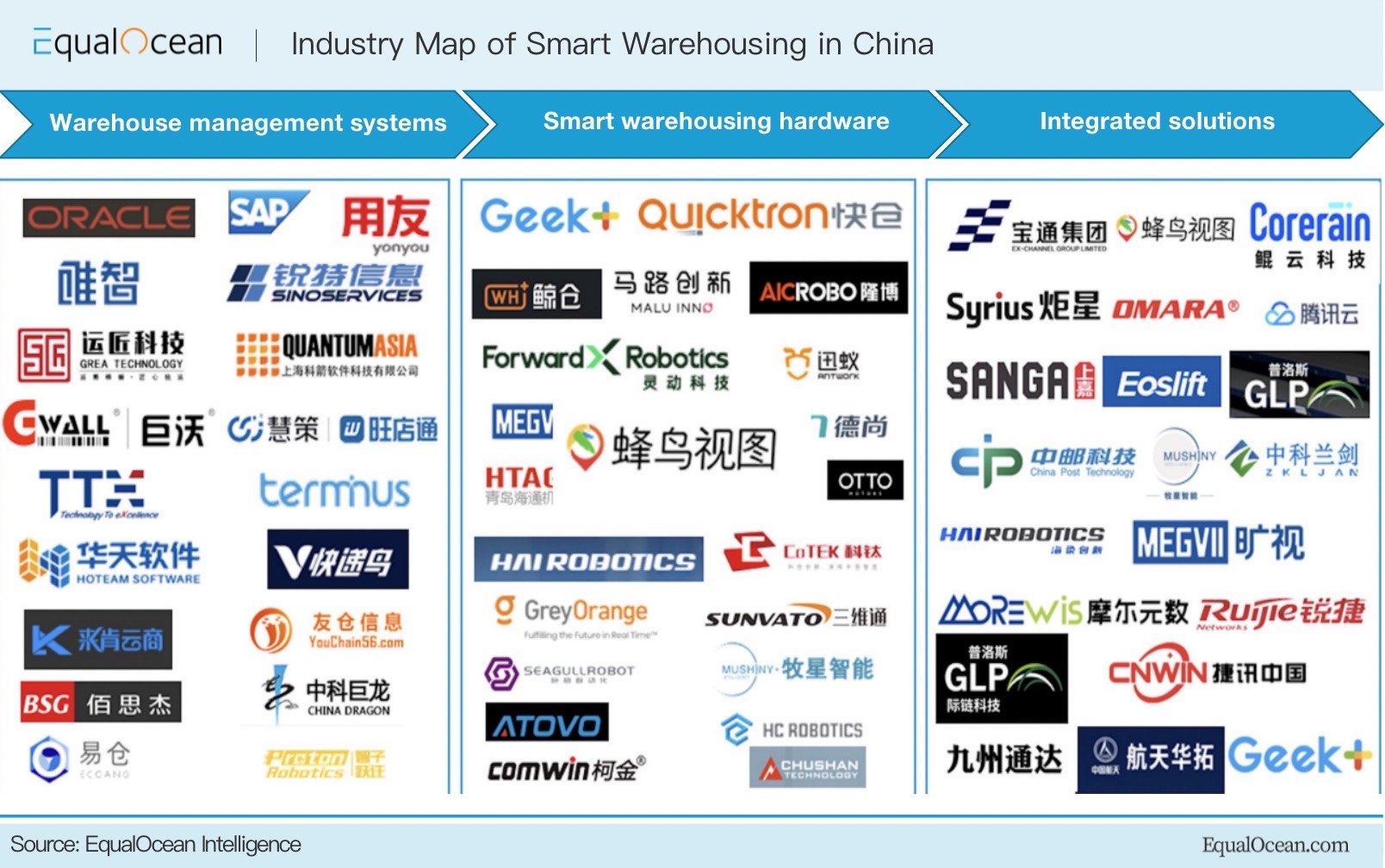 Chinese robotic companies are expecting not only domestic demand to explode, but to reap even richer profits in overseas markets. The market, in general, has some prominent drivers, and mobile robots are most attractive in regions that suffer from high labor costs combined with low unemployment, and high e-commerce penetration. Hence, countries and regions like Europe, the U.S., Japan, and South Korea show glittering prospects.

Hai Robotics claimed that the overseas market contributed 30% of its revenues in 2021 and the share would be lifted to 50% in 2022. Its self-developed HAIPICK, an autonomous case-handling robot, made its international debut in 2019 and received much attention from global customers. Up till now, Hai Robotics has established seven subsidiaries in Hongkong (China), Japan, Singapore, the U.S., the U.K., Australia and the Netherlands.

Quicktron has also made inroads in overseas territories. Its business footprints have covered 16 countries, including Germany, Spain, the UK, the U.S., South Korea, and Japan. In 2020, it established global strategic cooperation with Kion Group, a global leading manufacturer of industrial vehicles and prominent supplier of warehouse automation, to jointly promote smart warehousing across the world.

Multiway Robotics has made strides toward Southeast Asia, hoping to land flagship cases to attract potential clients around. By introducing programs to countries like Singapore, Malaysia and Vietnam, Multiway Robotics has developed agent networks for future business. Multiway Robotics told EqualOcean it would shift focus to the European and American markets as well in the second half of 2022.

However, going global can be a rewarding yet risky journey.

First of all, every market has its own characteristics and imposes different requirements on Chinese companies. Hai Robotics informed EqualOcean that overseas markets vary a lot in terms of detailed needs besides the shared desire to fill the labor gap with robots. For example, the Japanese market has higher quality standards for packages, pre-delivery inspections and delivery processes, while for operations in Southeast Asia, the primary task is to educate the market about the value of warehouse automation. As to mature markets in Europe and the U.S. where sophisticated interest chains have come into being, it is a necessity to conduct localization and play by their rules.

Second, supply chain disruptions caused by the pandemic are causing headaches for companies that are expanding businesses overseas. The sporadic covid flareups have slowed the recovery of the global supply chain, resulting in a series of problems such as chip shortages, soaring commodity prices and energy shortages, which to some extent have exerted pressure on the cost side of mobile robotics startups.

Thirdly, Chinese companies have to make extra efforts to brand themselves. As Quicktron revealed in the interview with EqualOcean, overseas clients usually prefer local companies who have successful projects they can easily relate to, even though those companies might be less competent compared with Chinese players. And Chinese companies are sort of in a community with a shared reputation. Once a Chinese brand messes up a project, foreign customers will question the quality of Chinese products in general.

Challenges are also looming in the domestic field. The most evident problem is the cut-throat price war which has dragged all players into a toxic competition and dampened the healthy development of the overall industry.

The mobile robot sector is still in its infancy in China. Only 1% of warehouses in China have achieved automation. At the current stage, companies are burning money for market shares. The flood of funds has overheated the mobile robot industry and overvalued some companies, which also needs time to cool down. And it’s expected that another 10 to 15 years will be taken for the market to mature and develop along the healthy track.

What’s more, limitations on load size and high purchase and maintenance costs of deploying mobile robots are expected to restrain the growth of the market. Many companies’ automation dream is held off by the high installation cost (which can be tens of millions of yuan) and integration capabilities required for the initial setup of mobile robotics. Painful initial investment limits the use of mobile robotics in various industries such as healthcare, logistics, education, and agriculture, thereby hampering the growth of the market.

It is regularly worried that robots will outplace human workers. But in the post-COVID world, the opposite is also true: robots are filling gaps left by widespread labor shortages. Coupled with the irresistible demographic aging, labor shortage as a prolonged problem will undoubtedly further boost demand for mobile robots in warehousing, offering enormous opportunities in the coming years.

The global autonomous mobile robot market is projected to grow from USD 1.97 billion in 2021 to USD 8.70 billion by 2028 at a CAGR of 23.7%. In this emerging market, Chinese players are trying to secure their slices of the cake.

In the future, those who have developed blockbuster products, thrived at home and abroad, managed to cope with various needs from different scenarios, and enjoyed good cash flow will have a bigger chance to lead the way.