As the industry increases its focus on improving vehicle assistance features, we believe in 2022, China's automatic driving market will reach a higher L3 level, in which LiDAR demand will ramp up. This article covers the forecast of vehicle-mounted LiDAR’s market size, the industry trend of vehicle-mounted LiDAR, commercialization barriers, and potential opportunities in the Chinese market. This article also brings you insights from LiDAR executives and its suppliers. 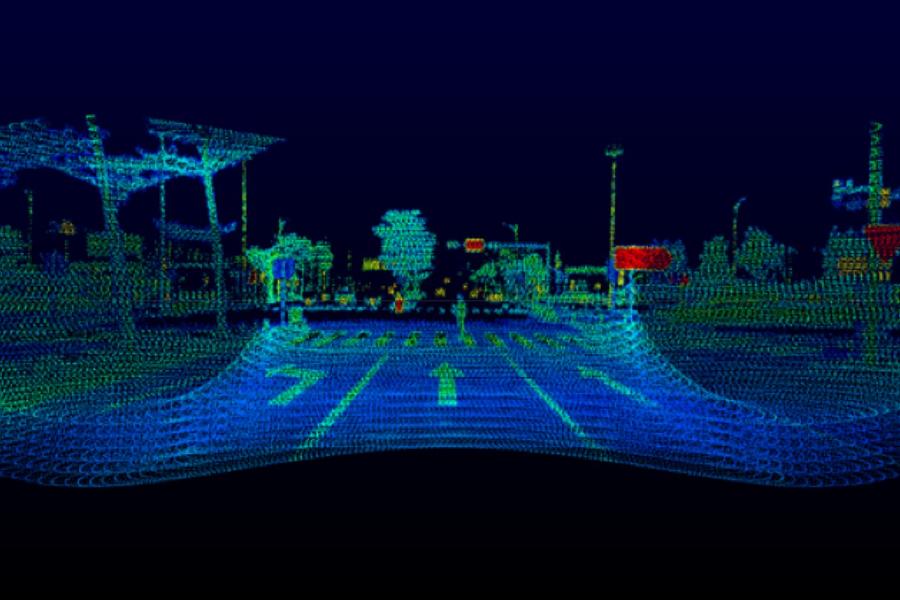 A recent trend is that many Chinese OEMs in 2022 will launch more models aiming at L3 autonomous driving with high algorithmic and sensing capabilities, such as NIO ET7, Li Auto L9, Xpeng G9, GWM WEY Mocha, etc. Thus, it is expected that the sales volume of models equipped with LiDAR will exceed 200,000 units in 2022. Most of these OEMs are equipped with one to three LiDARs per vehicle, and each LiDAR costs around CNY 6000 (USD 800-1000). We forecast that the market size of vehicle-mounted LiDAR in China will reach USD 3 billion in 2022E and USD 31.3 billion in 2025E, growing at a CAGR of 119 %. 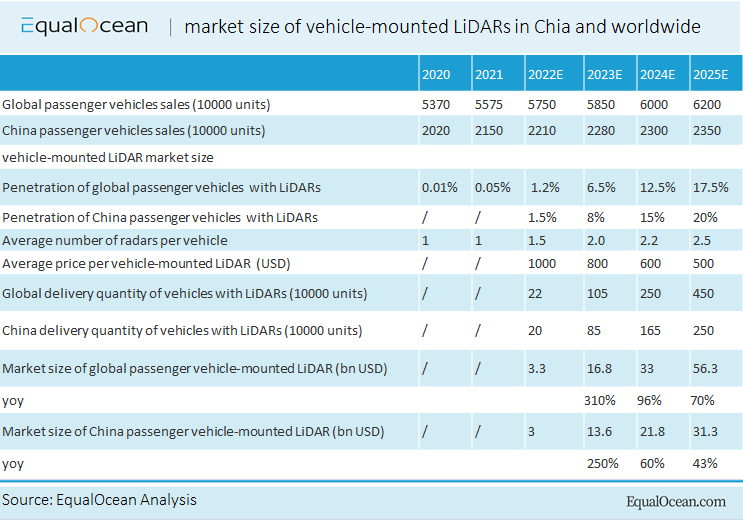 Vehicle-mounted LiDAR mainly consists of emitting modules, receiving modules, master control modules, and scanning modules. According to different technical routes of scanning modules, LiDAR can be divided into mechanical, semi-solid, and solid-state types. Specifically, solid/semi-solid-state LiDARs whose application on vehicles has been announced contain rotating mirrors, prisms, galvanometers, or MEMS mirrors. At this stage, semi-solid LiDAR, especially MEMS routes with mature technology, has replaced the mechanical routes, which have less stability and larger size. In the future, we believe pure-solid LiDAR will gradually become the mainstream. Overall, the prevailing route choice is to reduce mechanical components, improve the luminous efficiency, enhance computing power and reduce costs. 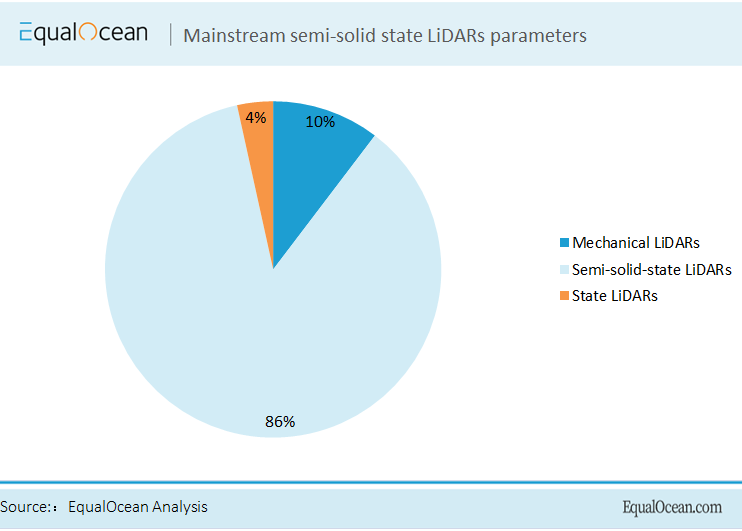 In the technology field, there are some evident transformations for each module of LiDARs. First, the laser emission module is transformed into a vertical cavity. VCSEL has higher power, smaller volume, and controllable yield; second, the receiving module is changed to SPAD, and the single photon device has higher sensitivity and small volume, which is suitable for mass production; third, the laser scanning system is developing towards solid-state, which equipped with simple structure, small size, high scanning accuracy, fast scanning speed and many other advantages. It can improve the performance while lengthening the service life and reducing the cost. The processing chip is developing towards integration. Moreover, adopting a SOC chip can reduce the system's complexity and improve the yield.

The requirement for total redundancy in the L3 system is a quantum leap from today's L2+ system, which also poses increasing demands for sensors. LiDAR can provide L3+ genuine redundancy in intelligent driving within minimal human intervention amid complex driving environments, especially in situations of frequent outside interference, which neither camera nor radar can achieve. We notice that L2/L2+ platforms only adopt radars and cameras, so the driving will depend a lot on human supervision. To become L3+ first-movers, brands focusing on electric cars and vehicle start-ups have become more aggressive in adopting LiDAR technologies.

Dr. Xueming Ju, CEO of LiangDao Intelligence (亮道智能) and expert in the Autonomous Driving field, accepted EqualOcean’s exclusive interview and demonstrated that the growing demand for vehicle-mounted LiDARs lies in clients’ improved understanding of the corresponding development and testing of LiDARs. It is well-acknowledged in the industry that advanced sensor configuration ensures driving safety. With the maturity of LiDAR technology and mass production, the cost per LiDAR is bound to drop. Meanwhile, the number of LiDARs per vehicle would increase depending on OEMs' needs for safety and cost reduction. They believed the cost of vehicle-mounted LiDAR would be cut to CNY 2000 (USD 300) in the future and most OEMs could accept the price.

Compared to vision and radar sensors system, LiDAR, standing for light detection and ranging, is a remote sensing method that uses light in the form of a pulsed laser to measure ranges and position, providing higher sensitivity to environmental recognition and less data support needs. Specifically, the application of LiDAR offers more stability for autonomous driving, as it can classify and track pedestrians, cars, and specific obstacles in any conditions. Besides, a multi-sensor fusion scheme (camera+ millimeter-wave radars+LiDARs) can also achieve high safety and reliability. Even when one of the sensor systems fails, the other can continue to operate. 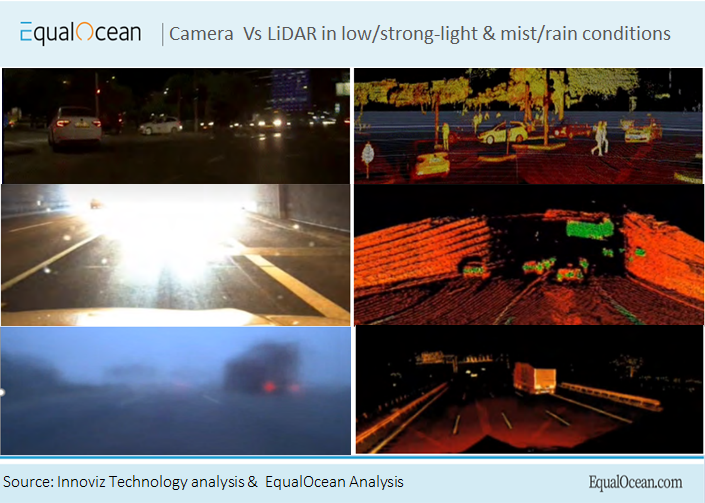 Dr. Shiwei Wang, the CEO of Tanway (Chinese: 探维科技) and expert in the field of optical precision measurement and optical design, accepted EqualOcean's exclusive interview. He told us that the pure solid-state LiDARs provide a more extensive field angle to monitor blind spots and detect complex corner cases and objects during autonomous driving.

First, stranded commercialization caused by the high cost of LiDAR is the main barrier to mass production. Currently, vehicle-mounted LiDARs have only been applied in high-end configuration options for vehicle models. We believe that the penetration and shipment volume of vehicle-mounted LiDARs will not substantially increase until the costs or prices of LiDARs are cut down. Moreover, with the entry of LiDAR manufacturers and the rapid development of many autonomous driving-related technologies, including point cloud, algorithm, and multi-sensor fusion algorithm, the lake of technology talents that brings high labor costs should be considered.

Second, compliance is another prominent barrier to LiDAR suppliers. Automotive-grade LiDARs with high-precision optical components require high reliability. So the reliability tests should be passed, including design and product verification tests, before being mounted in vehicles. It is also necessary to monitor the long-term performance, including failure rate and other key performance statistics.

Dr. Xueming Ju told EqualOcean that vehicle-mounted LiDAR directly relates to safety functions. So the overall requirements from development to testing, hardware to software, are relatively high, leading to limited suppliers that can mass produce vehicle-mounted LiDAR. Meanwhile, Dr. Wang shared his opinion that the barriers to obtaining automotive qualifications lie in 2 reasons. First, it is quite complicated to obtain Design Verification and Product Verification to meet the absolute surrounding adaptation requirement. Second, the quality system test for start-ups is hard to implement. To deal with the problems, they built strategic cooperation with experienced OEMs, like SAIC(Chinese: 上汽), from system design to experiment.

Though there are many players worldwide, those with core competitiveness are concentrated in China, the US, and Europe, vying to win a pitched battle. Foreign players like Velodyne and Luminar have gone public through SPACs to accelerate their growth with the help of the capital market, while in China, we believe some LiDAR suppliers should foster the rise of world-leading LiDAR makers.

LiangDao Intelligence, a global leading system provider of LiDAR sensors, provides customers with a whole stack of LiDAR sensing systems, which released China's first self-develop pure solid-state side-view Flash LiDAR a few months ago and is ready for mass production in the field of autonomous driving.

Dr. Ju mentioned that Chinese OEMs are more open-minded to new tech, driving vehicle-mounted LiDARs' mass production to keep up with OEMs' pressing demand for intelligent driving functions. For them, hardware SOP is only the first step in the mass production of LiDAR. However, the more complex challenge is verifying that the perception output of LiDAR meets expectations in complex and long-tail driving scenarios. LiangDao has advanced its layout in perception validation and launched a set of tool chain products further to support LIDARs' mass production. Regarding future planning, they plan to set up branches in Japan and North America. But it is a long-term ambition relevant to their client's growth strategy. They told EqualOcean they have the confidence to fulfill their global expansion in the long run.

Dr. Wang told EqualOcean that Tanway focuses on developing auto-grade solid/semi-solid-state LiDARs based on the ALS technology platform and hardware-level image fusion technology, featuring low cost and easy-to-implement. Regarding the import substitution of LiDAR, Dr. Wang mentioned that domestic substitution has made significant progress. On the one hand, large numbers of Chinese suppliers can provide optical components of LiDARs for them, from design to manufacture. On the other hand, they own self-developed transceiver chips in optical modules, resulting in tech optimization and cost advantages. Therefore, compared with global competitors, Chinese LiDAR suppliers provide lower-cost products with high performance. In the future, they plan to cooperate with OEMs and will still focus on Autonomous Driving field.

In conclusion, L3 advanced autonomous driving application fuels the LiDAR demand. EqualOcean believes that by the year 2025, the mass production of vehicle-mounted LIDAR in China market will reach USD 31.3 billion (CAGR of 119 % over three years), but the commercialization still faces challenges, like cost and tech limitations. The good news is some domestic LiDAR suppliers with advanced self-developed technologies have already achieved satisfactory performance in the initial mass production period. We believe LiDAR as a core sensor for autonomous driving is expected to further show a rapid development trend.