An Overview of The Robotics Industry: 30 Players of Production and Integration

In the era of connectivity and intelligence, there is no doubt that the robotics industry is bound to rise. In this booming sector, players along the industry chain are all striving to grasp their pieces of cake. Robotics is an industry of significant potential in the 21st century. Technological advances, coupled with the world’s aging population, are sure to spur the demand for robots across the globe. In the previous article, EqualOcean introduced 30 players in the manufacturing of key components. Now, we are going to have a glimpse of another 30 players specializing in robotics production and integration.

Founded in 2015, ROKAE (Chinese: 珞石机器人) is committed to developing and innovating next-generation flexible robots, light-weight industrial robots, and high-end intelligent equipment. In April 2022, the company completed a strategic funding round worth CNY 400 million, led by New Hope Group (Chinese: 新希望集团). ROAKE not only excels in multiple vertical markets in China but also operates in a dozen regions and countries across the world, including the European Union, USA, Russia, Japan, and Korea.

JAKA Robotics (Chinese: 节卡机器人) was founded in 2014. It is a high-tech company aiming at innovation and R&D for the new generation of cobots and smart factories. In July 2022, JAKA received CNY 1 billion in Series D, jointly led by Temasek(Chinese:淡马锡), True Light(Chinese:淡明), SoftBank Vision Fund 2 (Chinese: 软银愿景基金二期), and Prosperity7 Ventures. Innovative breakthroughs have been made in many applications such as drive control integration, integral joints, free-drive programming, wireless connection, etc.

Founded in 2018, Neptune Robotics (Chinese: 纳百机器人) develops and manufactures underwater drones designed for enterprises in the maritime industry. The company focuses on the inspection and cleaning of ship hulls by remote semi-automatic industrial-grade robots in port and anchorage scenarios, saving fuel consumption and reducing carbon emissions for the shipping industry. On April 22, Neptune Robotics announced the completion of a Series A worth CNY 100 million, led by Sequoia China (Chinese: 红杉中国), followed by Matrix Partners (Chinese: 经纬创投) and SOSV.

Huibo Robotics (Chinese: 汇博机器人) specializes in the development and application of robotics and intelligent manufacturing technology, as well as the training of industrial robots, intelligent manufacturing, artificial intelligence, and other related professional technical skills. In November 2019, the company attained CNY 120 million in Series B, invested by Guoxin Venture Investment (Chinese: 国鑫创投) and Dehui Group (Chinese: 德汇集团).

QJAR (Chinese: 钱江机器人) is a high-tech enterprise specializing in the research, development and manufacture of industrial robots and automation products. Its services cover industrial robot development, robotics application, automated assembly, and production lines of intelligent inspection. The company is committed to providing system solutions and turnkey projects for enterprise customers.

Geek+ (Chinese: 极智嘉) is an intelligent robotics company focusing on the development of autonomous mobile robots (AMRs) that can handle various tasks, including picking, moving, and sorting. In June 2022, the company raised over USD 200 million in total from Series C1 and C2. Founded in 2015, Geek+ now has sales, operations, and service capabilities in over 30 countries and regions worldwide.

Established in 2017, Han’s Robot (Chinese: 大族机器人) is dedicated to the development, promotion and application of intelligent robots in industry, healthcare, logistics, services and so on. It is a national high-tech enterprise incubated based on more than 100 people from the R&D team of Han's Motor Robotics Research Institute. In April 2022, Han’s Robot harvested nearly CNY 200 million in Series B+.

Founded in June 2015, Amy Robotics (Chinese: 艾米机器人) is a high-tech innovation company specializing in the research and development, manufacturing and sales of artificial intelligence robots. Since its establishment, the company has completed three rounds of financing. Its shareholders include Zhejiang Kechuang (Chinese: 浙江科创), Zhejiang Utrio (Chinese: 浙江永强), ENJOYOR (Chinese: 银江技术) and Fangfang Fund.

MEGAROBO (Chinese: 镁伽) is an AI and robotics company that specializes in the fields of life sciences, clinical diagnosis, and applied chemistry. It focuses on the research and development of robotics and artificial intelligence technology and deeply integrates it into industrial applications to provide customers with advanced intelligent automation products and solutions. In June 2022, the company netted around USD 300 million in Series C.

Founded in 2014, Yawei-Reis (Chinese: 亚威徕斯机器人) is a professional manufacturing company for linear robots and horizontal multi-joint robots. Its operations cover the manufacturing, research and development, assembly, and sales of industrial robots and related auxiliary equipment, as well as after-sales service. Yawei-Reis is a Sino-German joint venture, which has the technical support of Yawei and KUKA in the robot and automation business. 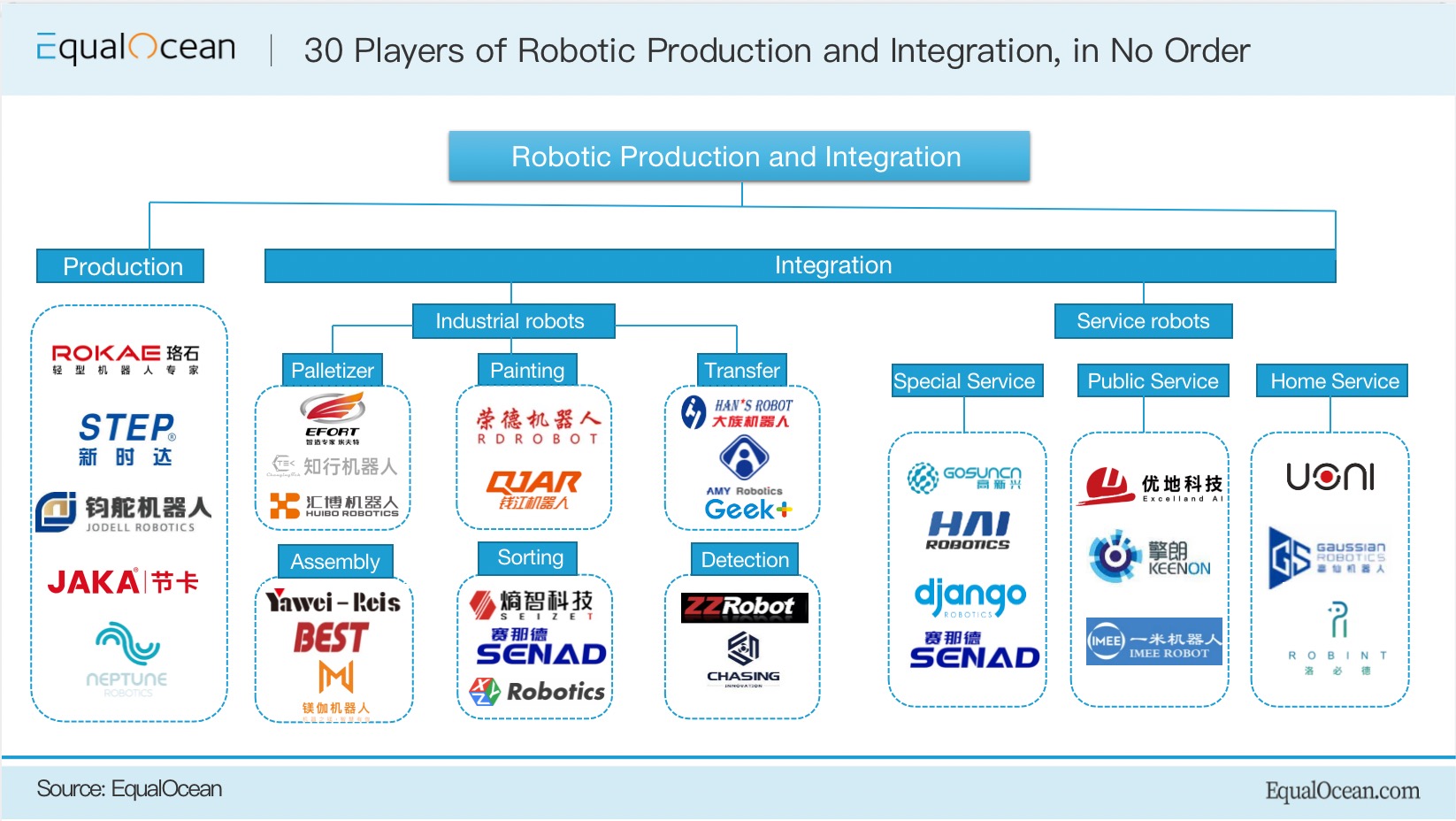 Senad (Chinese: 赛那德) is a leading provider of high-performance products and solutions in parcel logistics and automation. Taking machine vision deep learning algorithms and machine motion control as the core, its products help to deal with hundreds and thousands of parcels, packages and goods every day. In September 2021, the company attained CNY 30 million in Series A.

XYZ Robotics (Chinese: 星猿哲科技) develops AI-enabled robotic perception and manipulation technology for logistics and manufacturing automation. The company provides products and solutions for depalletizing, mixed-case palletizing, piece picking and bin picking, which are widely applied in industries such as e-commerce, automotive, electronics, and general consumer goods. In June 2022, the company raised USD 40 million in series B+.

Founded in 1997, Gosuncn (Chinese: 高新兴) was listed in 2010 and is committed to becoming a provider of products and services on smart city IoT. Its product lines include BWC (Body Worn Camera) Solution, and AR Video GIS(AR·VGIS). The Company provides monitoring systems, security systems, ventilation systems, and other related services for public security, traffic police, banks, and other fields.

Established in 2016, HaiRobotics (Chinese: 海柔创新) aims to empower every warehouse and factory with logistic robots. Its HAIPICK solution is the world's first autonomous case-handling robot (ACR) system that has been applied in 3PL, apparel, e-commerce, electronics, energy, manufacturing, pharmaceuticals, and several other industries. In June 2022, the company raised over USD 100 million in series D.

Founded in 2019, Django Robotics (Chinese: 姜歌机器人) offers AMR robotics solutions for the warehousing and logistics industry. Django established a research and development center in Shanghai in 2019. Team members generally have more than 10 years of robot research and development experience. In 2021, the company bagged millions of dollars in series pre-A.

Excelland (Chinese: 优地科技) is a developer and manufacturer of service robots. The company focuses on the mass production of autonomous service robots that can be used for last-mile delivery and general customer service applications, enabling businesses to improve their customer service capabilities. In October 2021, the company harvested CNY 200 million in series C2.

Uoni (Chinese:由利) focuses on smart home cleaning robots. The company adopts the Japanese precision design and cleaning ideology developed by Yoshida Mao design team, a winner of the Japanese Good Design award. Its R&D team has more than 15 years of experience in developing home cleaning robots. Its products are exported to more than 60 countries and regions around the world. As of June 2021, more than 50,000 units of UONI V980 plus; automatic dust-collecting robots have been shipped worldwide. In 2021, the company attained CNY 50 million in series A.

Gaussian Robotics (Chinese: 高仙机器人) is a developer of commercial automatic sweeping robots. It has a comprehensive product line of autonomous cleaning robots and has launched the autonomous delivery bot “X1”, and introduced a brand-new commercial cleaning bot “Phantas”. Established as a provider of SLAM solutions and robotics software, Gaussian has a technical edge in fields like Visual-LiDAR SLAM, back-end cloud computing, AIoT systems and mobile apps. In November 2021, the company raised CNY 1.2 billion in series C.

CONTACT US
Scan QR code to contact us for professional consulting services
Next article
Prelude to ESG 2022: The Third Generation of Chinese Entrepreneurs Is Taking the World