Editor's note: We at EqualOcean tracked the major funding rounds or industry events that took place in China's healthcare space in July 2022. And the following is a list of deals that we have selected for you, based on a number of criteria including the funding amount, the financial backers, and the segments in which the startups operate. 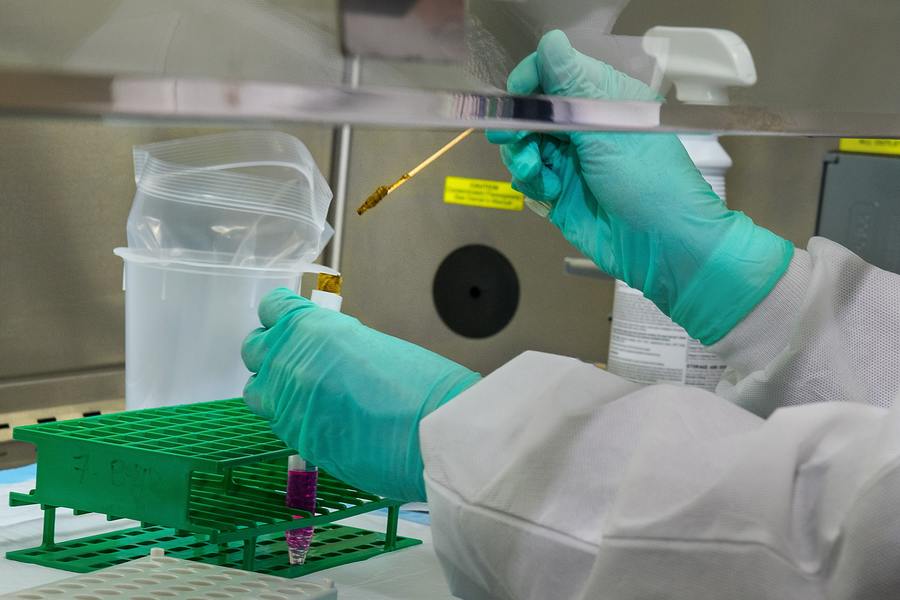 Mid-Link Group (Chinese: 海河生物) announced its completion of the Series B financing round worth more than CNY 100 million in late July. The round was led by Legend Capital (Chinese: 君联资本). The company will continue to expand testing facilities, develop CDMO services for medical devices and expand the talent team with the fresh proceeds. Mid-Link Group provides full product lifecycle services, service-based manufacturing, intelligent creation and third-party testing and certification for both medical device and pharmaceutical-related research institutions, manufacturing companies, and relevant regulatory agencies.

Dami & Xiaomi (Chinese: 大米和小米) earned tens of millions of USD in the Series D financing round in late July. The round was led by ABC Impact Fund, with the participation from Grand Flight Investment (Chinese: 远翼投资) and the existing shareholder OrbiMed (Chinese: 奥博资本). China Renaissance (Chinese: 华兴资本) is the exclusive financial advisor for this round. The funds will be used to improve the level of rehabilitation intervention for children, to enhance the service system and the development of new products. Founded in 2014, the company has developed the RICE rehabilitation intervention system with independent intellectual property rights, providing integrated services such as rehabilitation intervention, integration support, home guidance, parent training and science consultation for children with autism spectrum disorders.

Kolo Medical (Chinese: 珂纳医疗) announced its completion of the Series B+ financing round worth nearly CNY 100 million in late July. The round was led by Qianrong Capital Management (Chinese: 乾融资本), with the participation from Walden International (Chinese: 华登国际). The company will accelerate its launch of self-developed high-frequency ultrasound imaging systems to the global market with the fresh proceeds. The funding will also be used to develop next-generation CMUT chips and innovative ultrasound imaging products, with the help of the core patents of semiconductor ultrasound CMUT chips. Founded in 2013, Kolo Medical has become the leading company in CMUT chip technology and its products created new standards for medical ultrasound imaging.

MobiDrop (Chinese: 墨卓生物) completed its Series A+ round of financing worth nearly CNY 100 million in late July. This round was led by LYFE Capital（Chinese: 洲嶺资本), with the participation from the existing investors Source Code Capital (Chinese: 源码资本) and Yunxiang Funding (Chinese: 云祥基金). This funding will be used to expand the company's single-cell R&D pipelines, promote the development of the high-throughput microbial single-cell genomics platform MobiMicrobe™ and continue to accelerate the development and commercialization of its products. Founded in 2018 and driven by third-generation microfluidic technologies, MobiDrop is committed to empowering revolutionary advances in life sciences and precision medicine.

DPM (Chinese: 迪谱医疗), short for Digital Precision Medicine, announced its completion of Series B round worth hundreds of millions of CNY in mid July. This round was led by S.B. China Capital and Longmen Investment (Chinese:中关村龙门投资) , with participation from Icommon Capital (Chinese: 江苏皓越基金) and Risheng Fund (Chinese: 杭州日昇基金). The company will accelerate its product innovation, marketing and team building with the fresh proceeds. Founded in 2018, the company focuses on the development of intraoperative precision optical molecular imaging technologies and products. Up until now, 13 products of DPM have obtained the NMPA registration certificate and the CE certification. 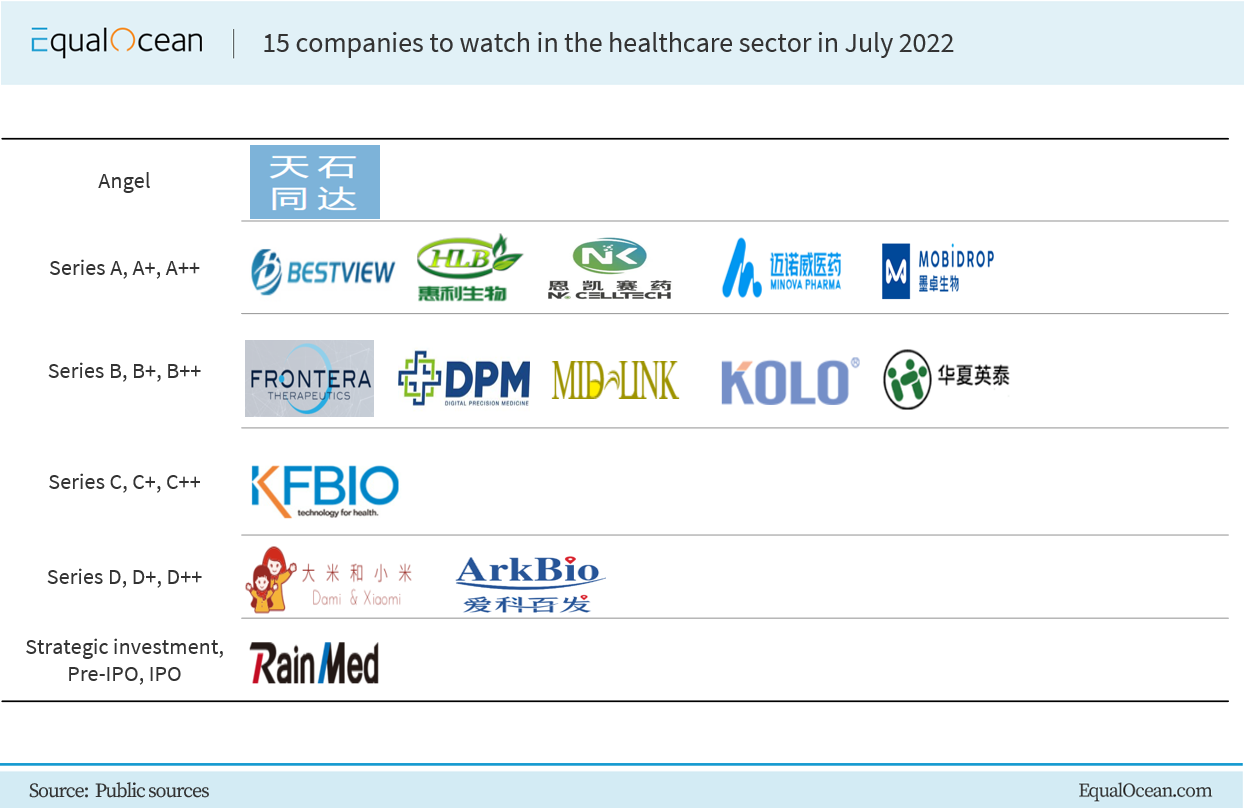 Biotech company China Immunotech (Chinese: 华夏英泰) announced its completion of the Series B+ financing round worth over CNY 300 million in mid July. This round was led by TH Capital (Chinese: 华控基金), with the participation from the existing investors Hankang Capital (Chinese: 汉康资本) and Lotus Lake Capital (Chinese: 荷塘创投). StartPointAdvisors (Chinese: 行远致同) continued to be the financial advisor for this round. The funding will be used to accelerate the development of clinical trials for the company's innovative immunotherapy drugs and the commercialization of its products. Founded in 2018, China Immunotech is dedicated to advancing biopharmaceutical research and development. The company focuses on developing and commercializing cellular immunotherapy products for cancer and other diseases.

ArkBio (Chinese: 爱科百发) completed the Series D financing round in mid July. This round was led by Loyal Valley Capital (Chinese: 正心谷资本), with the participation from C&D Emerging Industry International Investment (Chinese: 建发新兴投资), LongDa Food (Chinese: 龙大食品) and the existing investors Oriza Holdings (Chinese: 元禾控股), Qiming Venture Partners (Chinese: 启明创投), Shanghai FTZ Fund (Chinese: 上海自贸区基金及其临港新片区科创基金) and SME Development Fund (Chinese: 中小企业发展基金). The amount was undisclosed. The company will continue to develop more innovative drugs with clinical value for patients with pediatric and respiratory diseases globally with the fresh proceeds. Founded in 2014, ArkBio has a number of core technologies and global patents in the field of innovative drug development. It also has developed solid highly differentiated products through a combination of independent R&D and external introduction.

BestViewLaser (Chinese: 佰福激光) announced its completion of the Series A financing round worth nearly CNY 100 million in early July. The round was led by Yuanbio Venture Capital (Chinese: 元生创投), with the participation from the existing shareholder Northern Light Venture Capital (Chinese: 北极光创投). The funds will be used to conduct clinical trials and promote domestic mid-to-high-end medical and cosmetic laser equipment in the international market, including the enlighten pico laser, helium laser, alexandrite lasers, and dye lasers. Founded in 2021, BestViewLaser is committed to providing independent, creative product development and research services. The company has recently made significant advancements in some mid to high-end products in the fields of dermatology, plastic surgery, rehabilitation medicine, and large health.

Precision Autoimmune Therapeutics (Chinese: 天石同达 ) completed an Angel financing round worth CNY 140 million (USD 20.9 million) in early July. The round was led by Emerging Technology Partners (Chinese: ETP致和道康基金) and Redhill Capital (Chinese: 丹麓资本), with strategic investment from CASI Pharmaceuticals (Chinese: 凯信远达). The funds will be used to accelerate the declaration of US-China clinical trials of the company's product in research PAT-A001 and expand the deployment of its precision typing platform HDPM. Founded in 2022, Precision Autoimmune Therapeutics is the first company of innovative drugs in China focusing on the research and development of autoimmune diseases based on its precision typing platform HDPM.

Huili Biotechnology (Chinese: 惠利生物) raised nearly CNY 300 million in a Series A round in early July. This round was led by Legend Capital (Chinese: 君联资本) and BioTrack Capital (Chinese: 博远资本), with the participation from Cenova Capital (Chinese: 千骥资本), Yunqi Partners (Chinese: 云启资本) and ZWC Partners (Chinese: 众为资本). Taihecap (Chinese: 泰和资本) acted as the exclusive financial advisor for this round. The company will accelerate the construction and operation of large-scale production facilities, build new product pipelines and expand the team with the fresh proceeds. Established in 2018, Huili is devoted to the computational design of enzymes, and is one of few biomanufacturers with core technologies and mass production and commercialization capacity.

CONTACT US
Scan QR code to contact us for professional consulting services
Next article
Industrial Metaverse: The Next Crowded Universe