Although the hardware is considered an essential part of the AR industrial chain, the software is also the key to constructing a complete and advanced industrial AR ecosystem. Chinese AR content and platform providers use AR platforms to connect underlying technologies and AR software with downstream applications. For more information and data, please check the "2022 Augmented Reality Industrial Chain Analysis Report" that will publish in October. 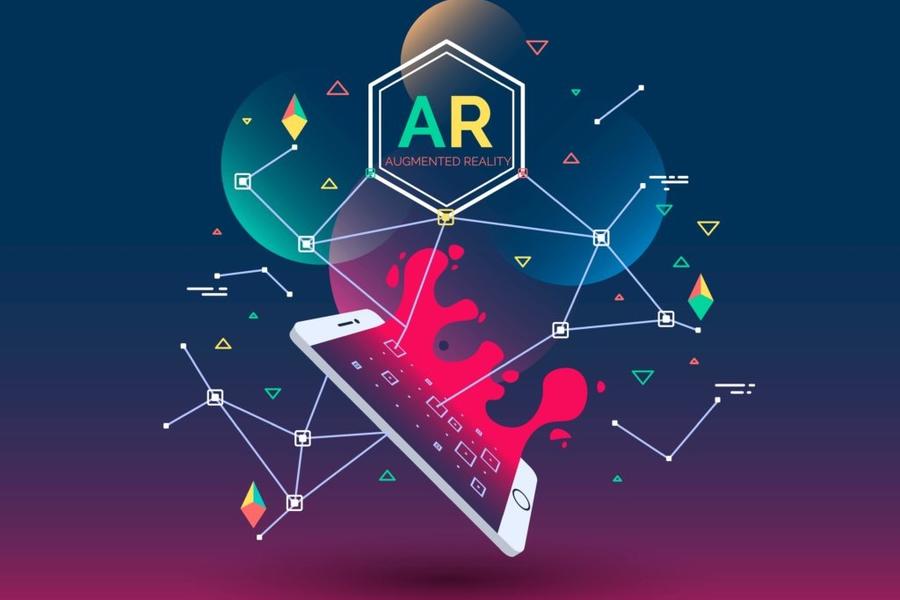 As a future technology, AR has been drawing the attention of Internet giants worldwide. Apple released ARKit in 2017 and now ARKit 6 in 2022. The platform can be divided into three layers that work together simultaneously: tracking, scene understanding, and rendering. For strategy, Apple has covered the AR industrial chain, including hardware, underlying algorithm, software framework, toolchain, content and application, and another sector in the industrial chain.

Google, like Apple, established its open platform -- ARCore, and Huawei, Xiaomi, and Samsung became the first batch of phone makers that use ARCore on their phones. Internet giants' business deployed on AR industrial chain is getting clear.

AR software is widely used in multiple ways, including AR devices, like AR glasses, websites, mini-program programs, and smartphones. Therefore, AR software is expected to have a larger market scale than AR hardware in the short term. 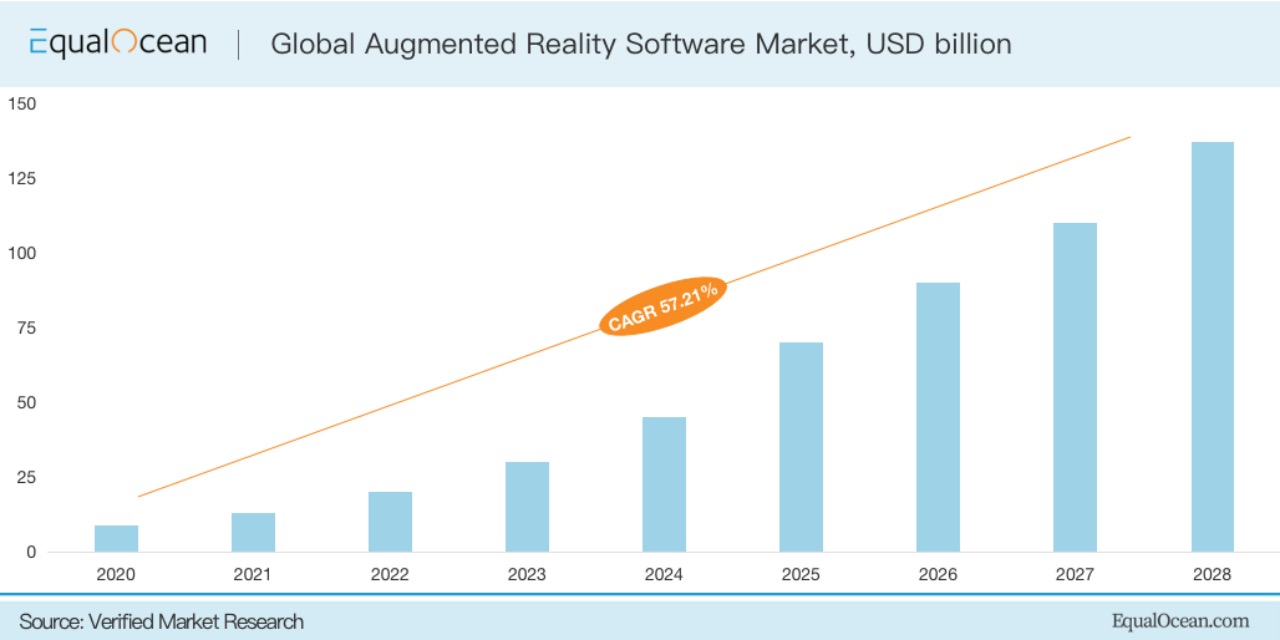 The AR software is usually used in the retail, education, repair and maintenance, and medical industry. Still, with the increasing need for AR and the rise of the metaverse concept, AR technology is getting used in sectors like automobiles, scenic areas, and museums. As an immature technology, AR provides certain advantages to businesses that other software cannot offer, which include product view, enhanced content, training, productivity, and audience engagement.

As an immature industry, AR technology, including AR software, is still waiting to be explored. Currently, there are several types of AR software:

This solution allows users to upload 3D content for later AR experiences. Users can also use the platform to manage and edit their AR content. AR CMS has functions similar to AR SDK but with a more customizable AR experience.

AR SDK is the core technological software engine that powers the development and creation of new AR apps and experiences. The role of the AR SDK is to perform the non-trivial task of fusing digital content and information with the real world. The capabilities of the SDK will ultimately underpin the features and functionality within your AR application, so it's essential to choose the right platform based on the requirements of your project.

It uses computer vision technology to identify and capture flat images or simple three-dimensional objects in real-time. It then allows developers to place virtual objects through the camera viewfinder and adjust the object's position on the physical background in front of the camera.

The software allows users with limited or no coding-related knowledge to create AR content. AR WYSIWYG editors offer drag-and-drop functions that enable users to upload their 3D objects and then drop them into a designed scene.

A 3D engine, also referred to as a 3D game engine, is a system used for the virtual computer. A 3D engine has multiple functions that work together to create an immersive user experience. The rendering component of a 3D engine calculates the visual appearance of a scene, while a physics component determines how different objects should interact. Some machines also include features such as scripting and artificial intelligence to enhance the feeling of realism.

The software is used to train employees through AR technology to improve effectiveness.

It provides tools and solutions to companies in the industrial field, including AR content that improves employees' productivity and safety.

With the appearance of open AR development platforms released by Apple and Google, the AR software market has been dominated by SKD providers. The Augmented Reality SDKs are supported in various systems through multiple APIs, which create flexibility. At the same time, it has different functions such as 3D object tracking, image recognition, visual Simultaneous Localization And Mapping (SLAM), and others.

Due to APIs, SDK software could work together through different platforms, including iOS, Android, Windows, and other operating systems. The AR software chain is forming its ecosystem while some internet giants are building their SDK platforms. From the AR framework's perspective, Unity launched AR Foundation, a set of MonoBehaviours and APIs for dealing with devices that support 3D object tracking, plane detection, anchor, and other AR-related concepts. For the 3D engine, Unreal released Unreal Engine 5.0, which enables real-time 3D content and experiences with greater freedom, fidelity, and flexibility.

Compared to the competition pattern in the smartphone industry, phone makers like Huawei, oppo, and Xiaomi have stopped following Apple's products and relying on Google's software. They have started building their products and making their strategies in the new industry. Huawei developed an operating system called HarmonyOS and HMS Core to compete with ARCore. Giants like Google, Apple, and Huawei tend to establish AR as a part of their whole business, which is a challenge to the third AR platform providers who need to ensure the platform is open and easy to use. 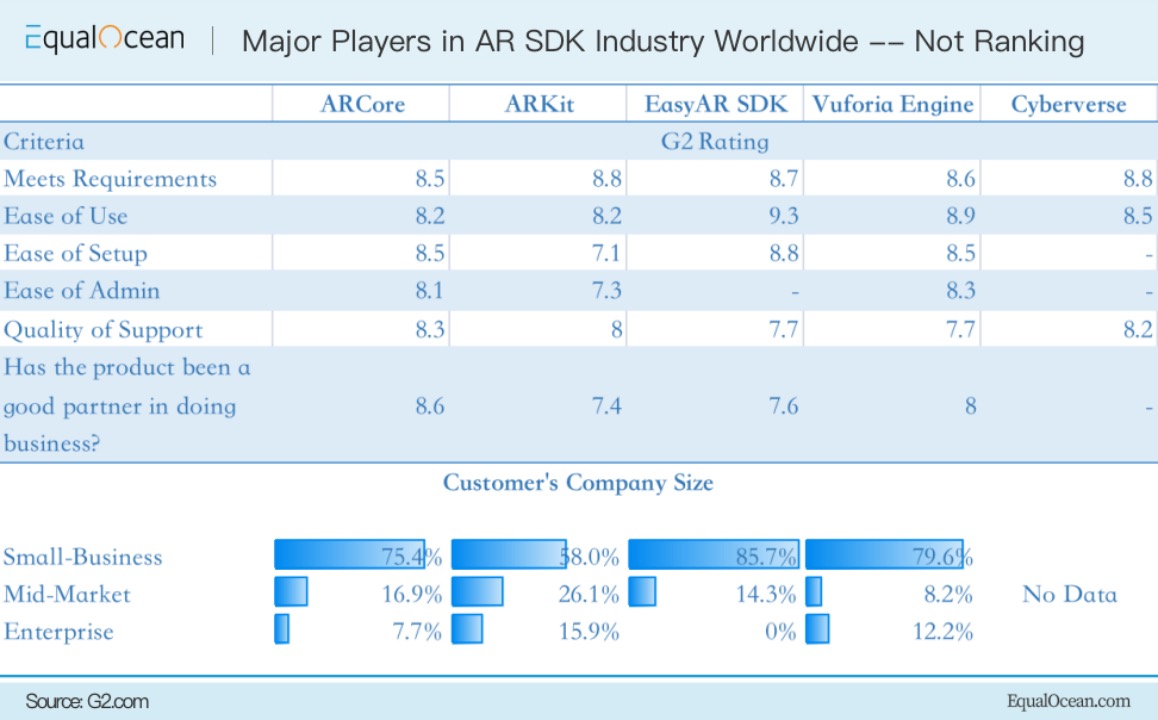 Compared to AR SDK platforms created by internet giants, EasyAR SDK and Vuforia Engine appeared to be successful competitors with ease of use and setup, and they usually serve small-business clients. EasyAR recently released EasyAR Mega, a city-scale AR cloud solution, to work as a Platform as a Service (PaaS) for SLAM. EasyAR Mega's framework is based on an extensive data system and consists of SDK, creative tools, and cloud service. To compete with other companies in the industry, EasyAR empowers its EasyAR Mega with city-scale mapping, localization ability and user-friendly toolchains.

Tu Yi, the COO and co-founder of EasyAR, told equalocean that the core competitive strength is that users could create AR content with a better Mixed Reality (MR) blocking to make virtual content looks more real while blending into reality. Through the platform, creators' AR content will fit the environment precisely.

Years ago, AR experiences were created based on picture and plane recognition and could not persist for a long time. Still, with AR cloud and SLAM technology, AR experiences could be creative everywhere on everything. Due to the characteristics of AR technology, the information stored in the cloud, including world coordinate information, feature point cloud map, and other information, can be retrieved by the intelligent terminal, then shown in reality in a virtual form. Thus, the AR cloud has brought AR creation to a new level, a massive step toward the AR era.

To conclude, the AR software market occupies a key position in building the ecosystem of the AR industrial chain since it works as a link among AR content, application, and the terminal device. Among all kinds of software in the market, an easy-to-use SDK platform has become a powerful tool for small businesses creating business-related AR experiences. Meanwhile, with the AR cloud solution and SLAM technology, the AR experience will be seen through different devices from another person. Therefore, the AR software industry will focus on the research and development of AR cloud, open platform, and SLAM technology.