China's mobility industry has developed rapidly in the past 10 years, and the investment and financing activities in the sector have consequently gone through "great changes unseen in the century". EqualOcean has conducted research on investment and financing statistics over the past decade and analyzed the trend of the industry by several major sectors. In addition, this report also provides in-depth analyses from four perspectives and forecasts on future development trends. 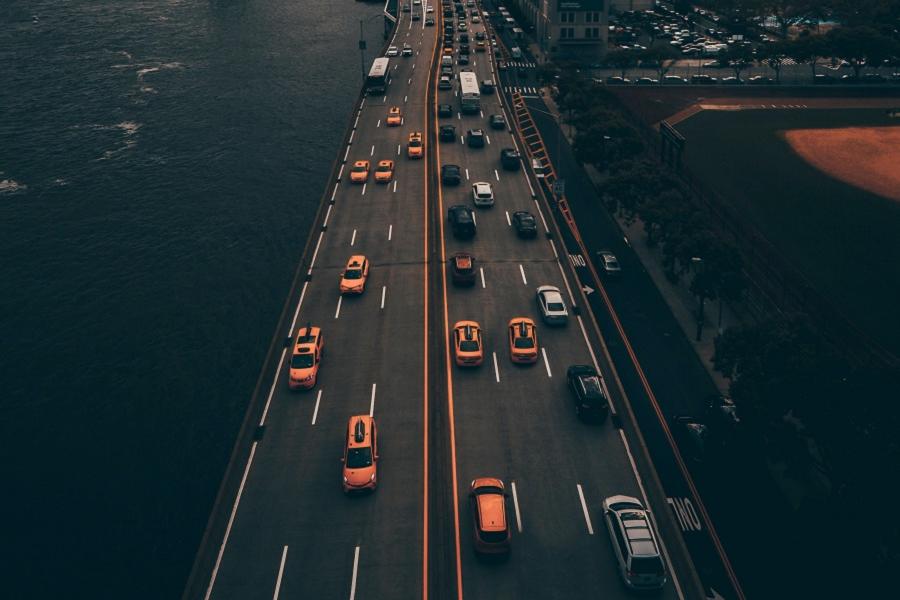 This is the Chinese version of the report released by EqualOcean Intelligence.

From 2012 to 2022, with the continuous development of the mobility industry, innovative technologies emerged, new sectors took shape, and new players entered the market. All of these have contributed to a fast-evolving market landscape. Meanwhile, as more and more investors see the opportunities in fast-developing and promising sectors in the industry, pre-IPO investments continue to soar. In this context, EqualOcean traces the investment and financing activities in the past decade and concludes the main trends of the mobility industry in China. Besides, we have sorted out the investment behavior pattern in this report, which is expected to help investors and related companies find potential opportunities in the industry, and jointly contribute to the development of the whole industry. 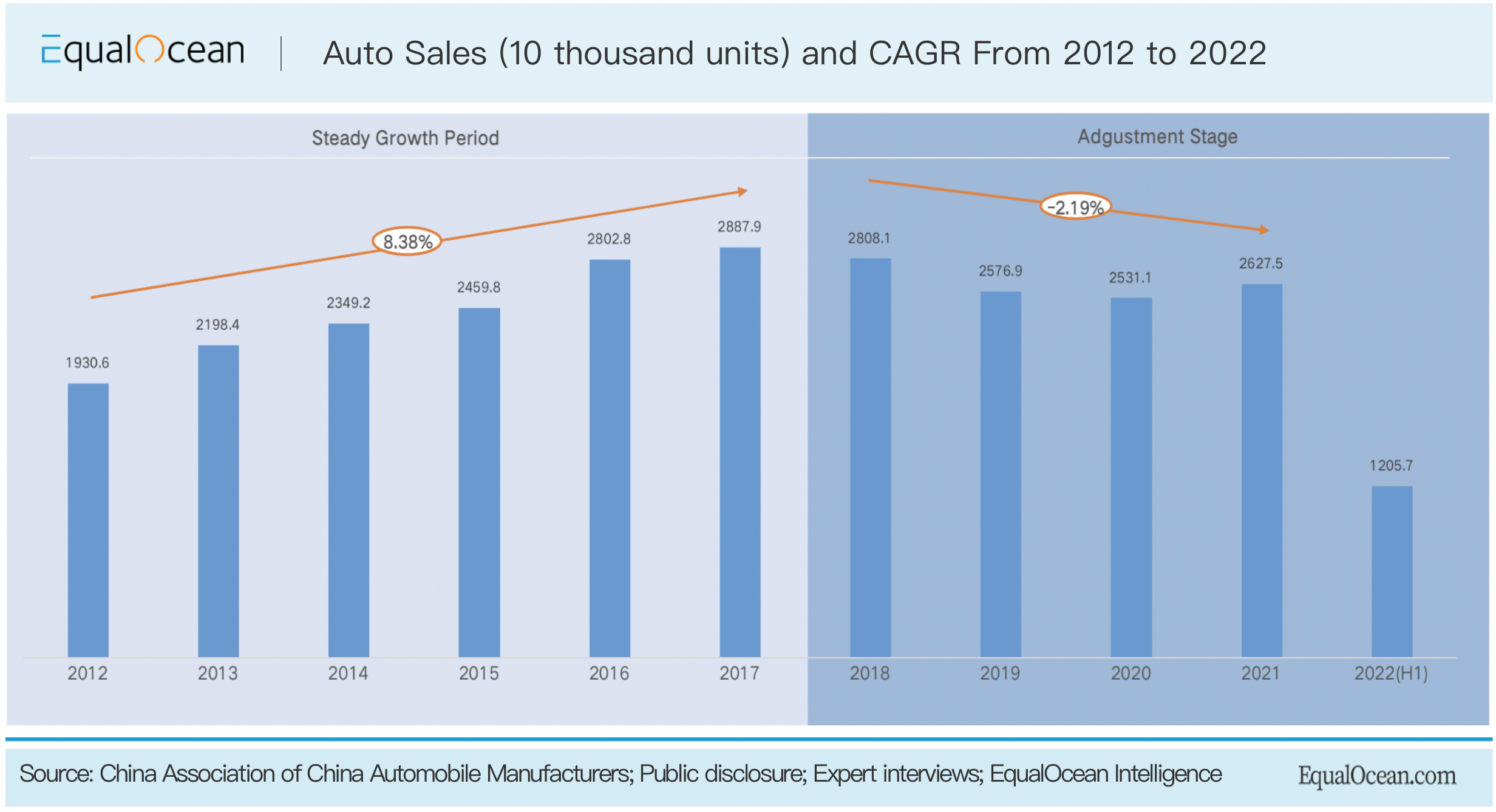 In the past 10 years, thanks to the strategic guidance of top-level policies, an improving supply capacity and increasing demand, new technologies and products emerged in the mobility industry. In the pre-IPO market, the year 2018 marks a watershed for investment and financing activities in the industry. Before 2018, investors just poured money into every industry sector, resulting in the rocketing growth of the overall investments. Yet since 2018, the focus has gradually turned to automation and smart technologies. Investment and financing events in these two sectors accounted for more than 20% of the total in the year. In terms of investment and financing amount, auto technology enterprises have enjoyed the highest popularity among investors in the pre-IPO market, receiving a total amount of CNY 272.28 billion, or 31% of the total CNY 878.09 billion, over the past decade. Meanwhile, NEV and auto service ranked second and third with CNY 228.4 billion and CNY 220,86 billion, respectively. In the past five years, the proportion of NEV and autonomous driving has increased significantly, showcasing a strong momentum for growth. 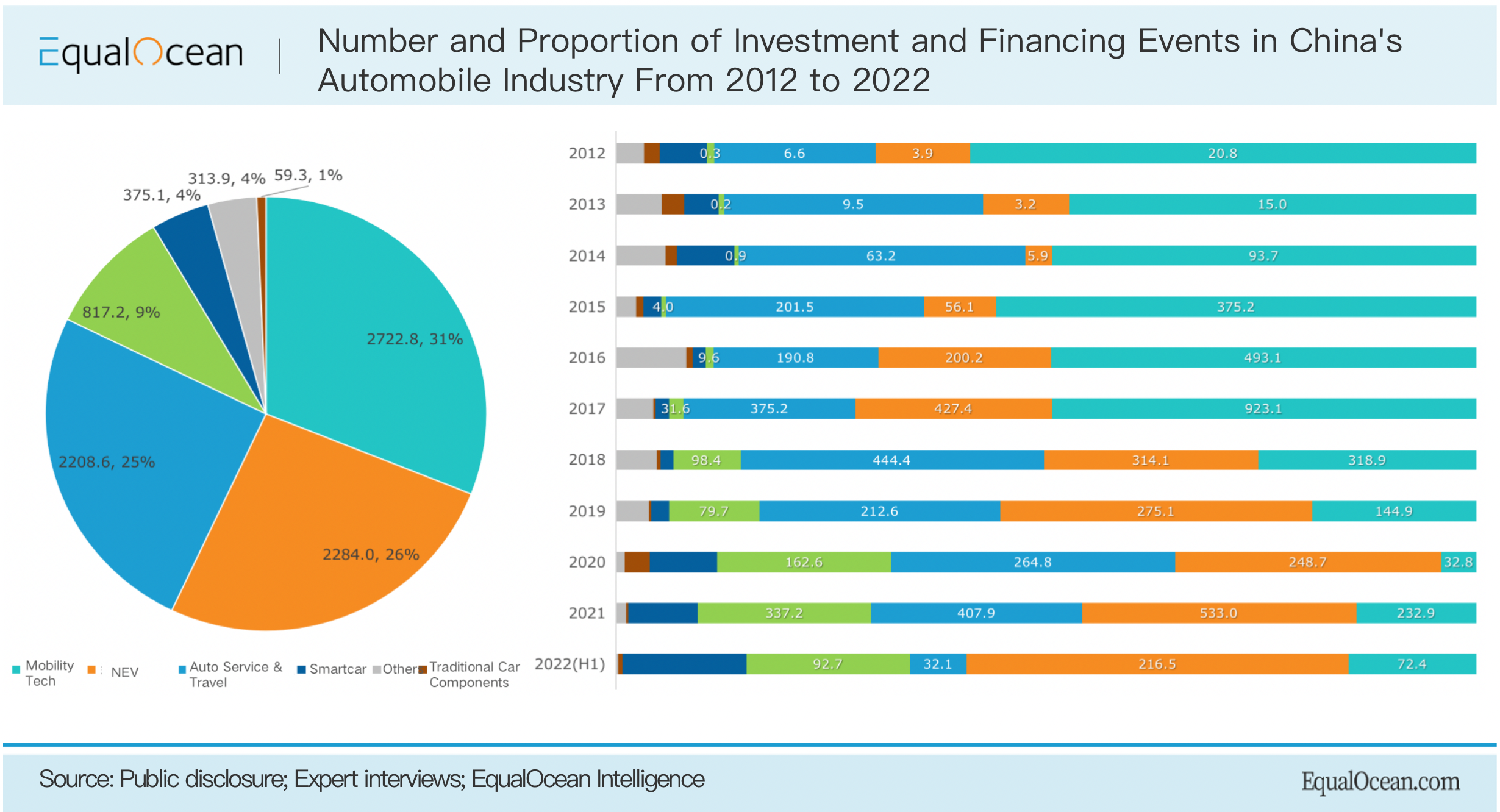 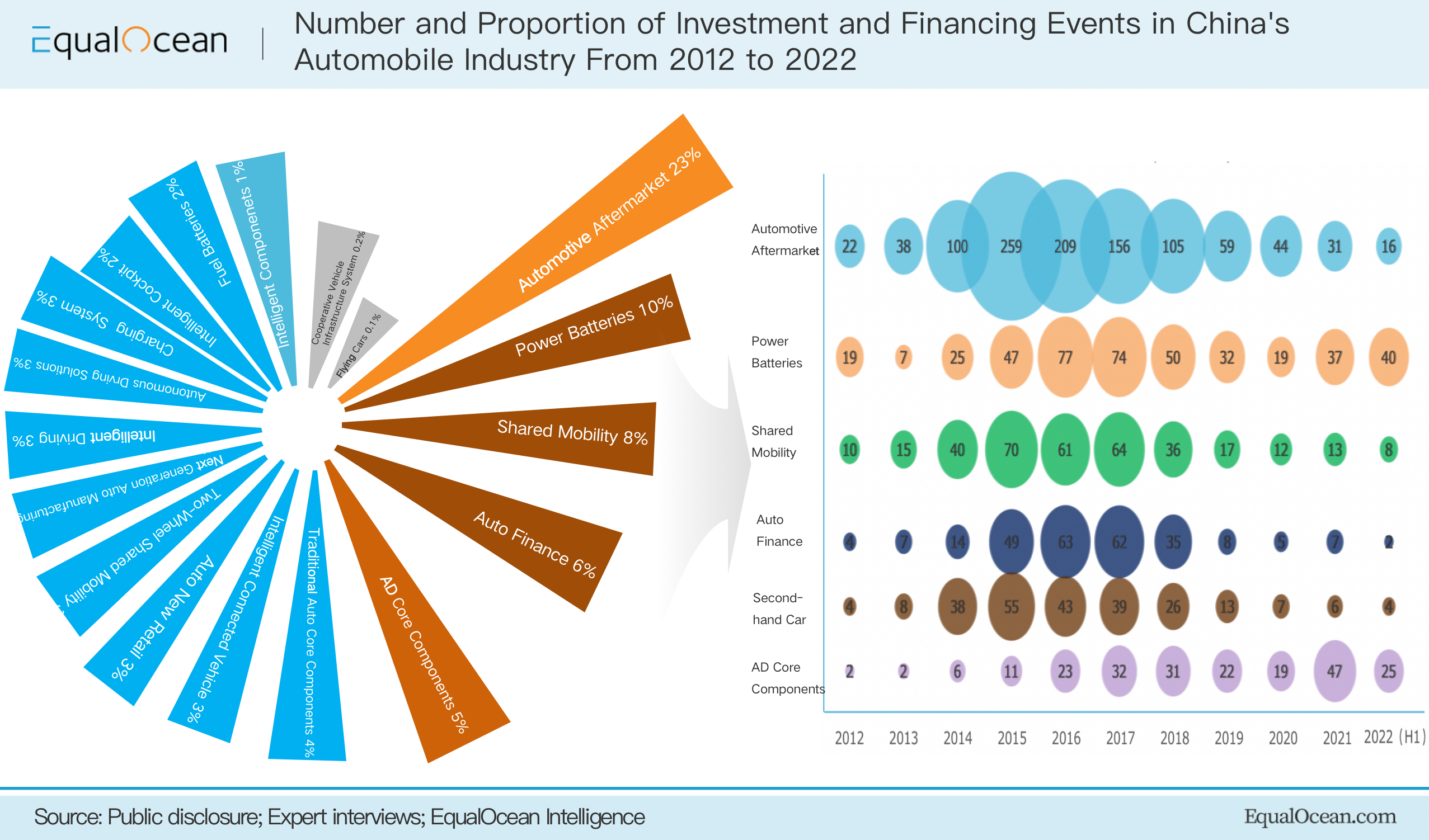 Auto Aftermarket: The number of investment and financing events in the auto aftermarket accounts for the largest proportion of 23% over the past decade, but the declining trend started after the peak at 259 cases in 2015. As for the amount, the total investment and financing amount soared to CNY 23.79 billion in 2018. However, from 2019 to 2020, as the short-term dividend of the market disappeared, the amount of investment and financing decreased significantly. Since the market threshold is not high, many technologies and Internet companies actively seize the opportunity to expand their field business. As a result, the after-market service expended from traditional car services, such as repair and maintenance to new areas, and the value-added services based on new consumption and digitization have become the most popular, such as personalized car beauty services and smart parking.

Power batteries first became popular in 2012, and then entered a long downturn period. However, in 2022, as the capital market recovered, the power battery sector once again attracted attention from investors and the number of investment and financing events in the first quarter alone was as high as 40. The investment and financing amount had grown steadily and reached the highest, or CNY 8.65 billion in 2018. Then it dropped, but in 2021 the total amount soared to CNY 25.48 billion, a year-on-year growth of 602%. In terms of investment and financing priority, as prices of battery raw materials have risen sharply, enterprises have to increase their investment in upstream raw materials enterprises to ensure production capacity. More specifically, in 2012, raw material companies received half as much investment as battery manufacturers, and in 2021 the amount was almost the same.

Bike sharing includes new mobility modes such as shared bikes and motorbikes. It began to attract attention from investors in 2013, and enjoyed great popularity in the following several years. However, the competition was fierce and standard practices were yet to be established. Shortly after the peak in 2017 and 2018, the number of investment and financing events showed a cliff-like drop, and in the past three years, less than 5 investment and financing events took place on average. In terms of investment and financing amount, the number began to rise rapidly in 2014 and in 2016 it amounted to CNY 3.58 billion and in 2017 rocketed to CNY 23.66 billion, up 560.9% year-on-year. In 2018 it maintained a growing momentum, attracting some CNY 23.76 billion in investment in total. On the whole, the bike-sharing sector once enjoyed considerable popularity in the capital market, but the overall situation quickly declined.

Auto finance is mainly subjected to the influence of government policy changes. In 2015 when the General Office of the State Council issued the Guidance on Accelerating the Development of the Financial Leasing Industry to encourage the development of NEV and supporting facility industry through financial leasing, the auto finance sector experienced fast development. While in 2018 and 2020 when regulatory policies were introduced to tighten financial leasing licenses and limit leverage ratios, the investment and financing activities decreased correspondingly. For example, in 2018, there were only 35 auto finance investment and financing events, and in 2020, there were only 5. The investment and financing amount was comparatively high from 2015 to 2018, with 2017 reaching CNY 11.66 billion, the highest in nearly 10 years.

The second-hand car industry has become a new hot spot for investment since 2014 under the background of the Internet and investment boom. In 2015, investment and financing events reached the highest of 55 cases. The number declined slightly in the following four years but was still high. Since the pandemic broke out in 2020, the number and total amount of investment and financing events have decreased significantly. The amount reached its highest in 2019, with some CNY 12.04 billion. In terms of investors, used car e-commerce enterprises comprise the main forces. The main reason is that the cost of online second-hand car trade is lower, which shortens the time of the investment return cycle.

The next-generation auto manufacturing industry has received huge amounts of investments, especially when NEV has become a kind of “common entrepreneurial pursuit” since 2017. OEMs developing electric and intelligent vehicles need to raise a lot of money to develop longer-range and safer cars, and to promote their products to consumers. As a result, although only 131 investment and financing events took place in 10 years, the total amount of investment reached CNY 153.9 billion. There were only 5 investment and financing events before 2014. And in 2015 the sector gradually attracted attention from investors. In 2016, the number of events reached 24, the highest on the whole. On average, there are only over ten cases every year. The total amount of investments began to increase in 2015 and reached the highest in 2017 with a worth of CNY 36.09 billion. After that, although the capital market fell back, new players joined in, and the total investments remained above CNY 10 billion yearly, showing that the industry remains a hotspot of attention among investors. 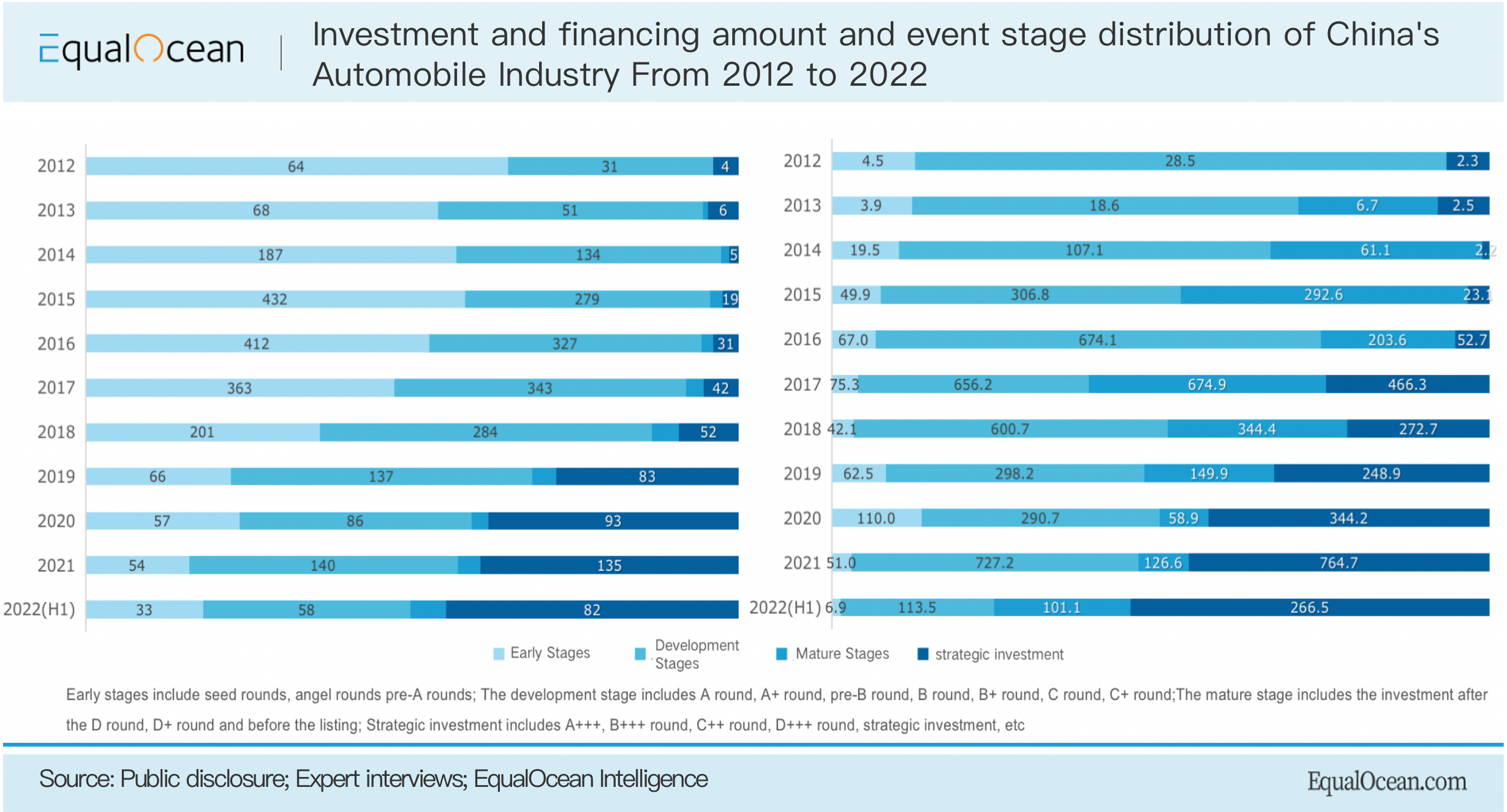 In terms of investment rounds, investors’ focus gradually turned away from “early” rounds to “last” stage funding. Since 2017, the total number of mid and late-stage investments (development stage, mature stage, strategic investment stage) has exceeded the early stage investments, indicating that enterprises are becoming more mature and they are transforming from the early concept-proving stage to the establishment stage of business models. As EqualOcean sees it, a large number of start-ups in several popular sectors sought to “burn money” in exchange for “attention”, so the investment once was attracted to them. Yet most of these companies can only get the first one or two rounds of financing, and eventually get knocked out of the tide. From the perspective of IPO withdrawal, a total of 77 Chinese auto travel enterprises have successfully gone public in the past 10 years, with a financing scale of CNY 209.2 billion. Among them, four withdrew and three of them were ride-sharing companies and the other one was an autonomous driving company. Power battery companies have taken up the largest number of IPOs, and ride-sharing companies and next-generation manufacturers are on the most “money-burning” track.

Over the past ten years, China’s mobility industry has gone through huge changes. Fuel cars were declining and NEVs are stepping onto the central stage. The development of new technologies is constantly changing investment dynamism. The investment market has experienced ups and downs, with explosive growth and “winter” days. Some enterprises chose to be abreast with the trend and successfully went public. And some other enterprises made the wrong choice in industry selection or development strategies and were knocked out of the competition.

This article contains only excerpts from the report. For more details, please click to  download the full report here.