This article brings you the first insight into the Chinese Auto Report 2022, released by EqualOcean recently. Specifically, this article introduces the market dynamics and trends of China’s automobile market, focusing on the current market situation, driving forces, and market segments, including power batteries, semiconductors and sensors. In addition, we will introduce two potential players in the sensor sector, namely Chuhang Technology and Benewake. 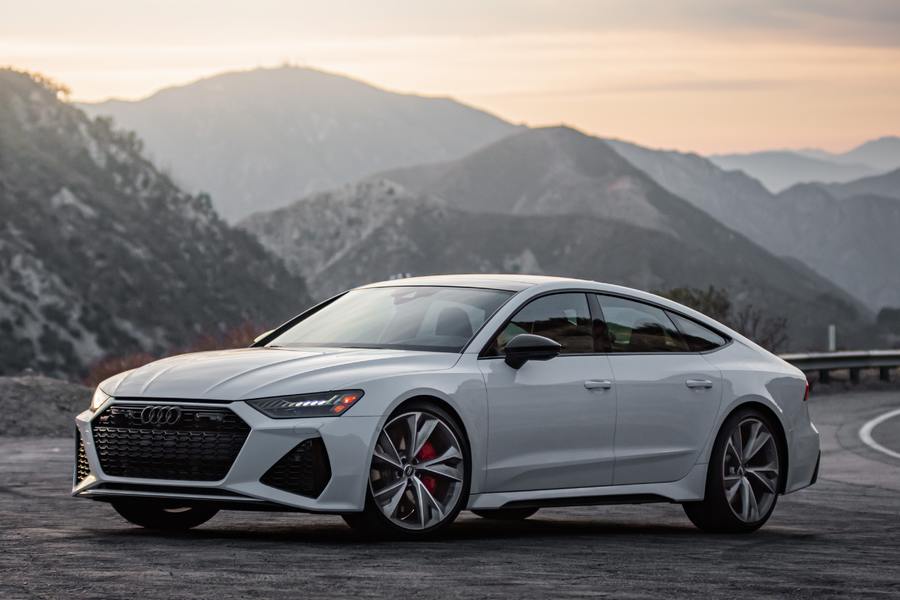 China's auto market is rocketing and has become an essential part of the world industry.

China's automobile industry has developed rapidly and become the pillar industry of the national economy. Compared to the overall automotive market, where growth has been constrained by the ongoing semiconductor shortage and effects of the pandemic, sales of NEVs remained relatively strong globally. Of particular note, NEV sales in China are rocketing. According to the Ministry of Industry and Information Technology statistics, China's automobile production and sales exceeded 28 million in 2016, ranking first in the world for eight consecutive years. In addition, China's automobile gross output was more than CNY 10 trillion (USD 1.4 trillion) in 2021, contributing to almost 10% of China's GDP. However, the gross industrial output of real estate, a "pillar industry" in the past, was merely CNY 7.78 trillion in 2022.

Also, with the rapid development of the Chinese automobile industry, the Chinese automobile has become an essential part of the world industry. According to the National Bureau of Statistics of China, the country exported 2.12 million units in 2021, which almost doubled compared to 2020. In 2021, China ranked No.3 in vehicle export, after Japan, which exported 3.82 million cars, and Germany, 2.3 million. Moreover, gasoline vehicles accounted for most of China’s export vehicles in 2021, followed by EVs, which account for 56% and 26%, respectively. 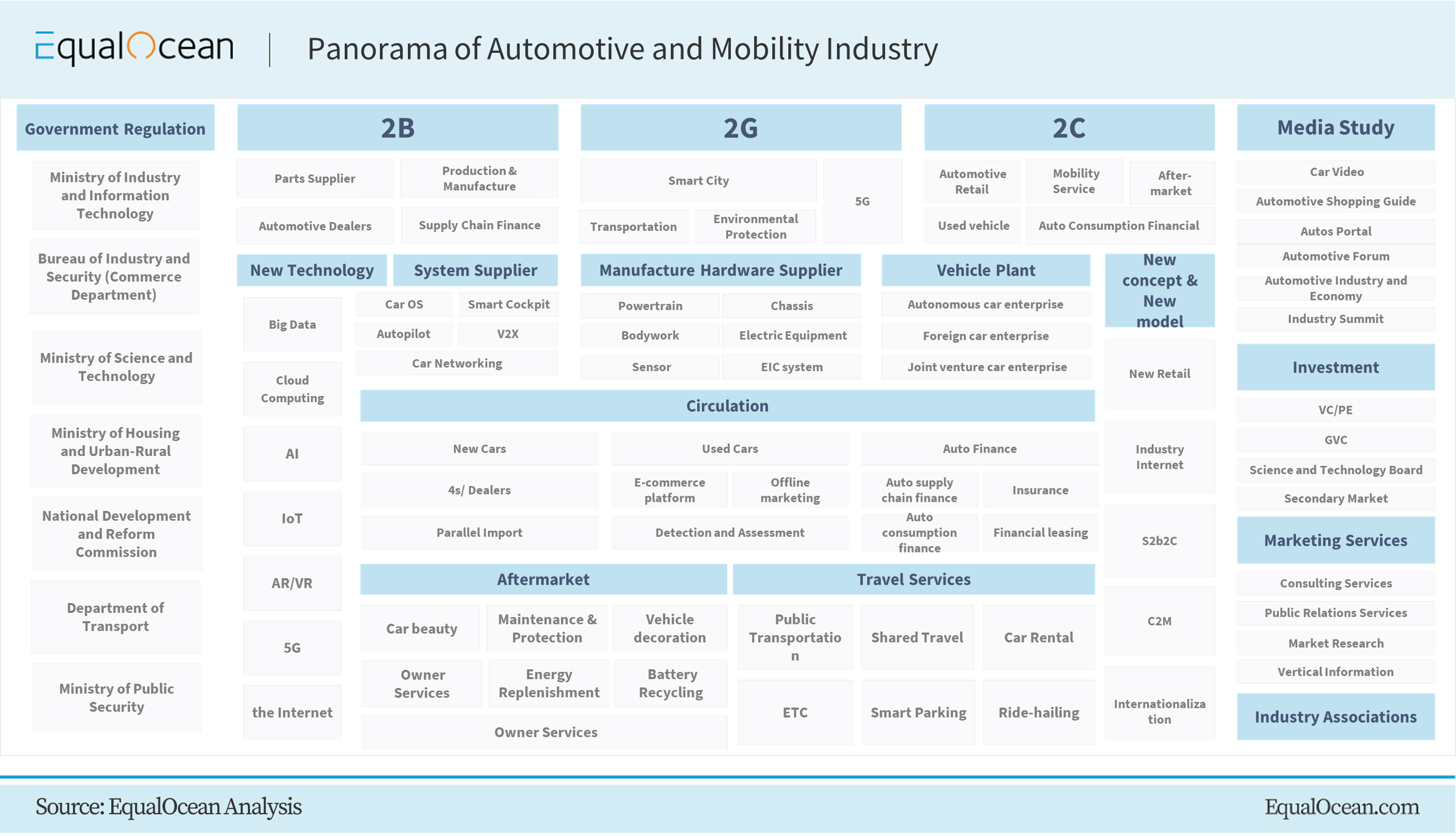 The strong growth of the automotive market can be attributed to three main reasons: policy incentives, capital support and increasing consumer demand.

The Chinese government has successively launched policies to stimulate the development of the auto industry, such as NEV purchasing tax exemptions and promoting cars to the countryside. In May 2022, China released a policy to boost new energy vehicle (NEV) sales in rural parts. And at the same time, the government’s new policy cut the NEV purchase tax by 50% for cars priced at no more than CNY 300,000 (USD 45,000) with an engine capacity of 2.0 liter or more minor.

From the automotive market investment and financing situation perspective, approximately 254 financing events happened from May 2021 to May 2022 in the mobile technology industry. Ninety companies had received strategic investments from domestic and international PEs, VCs, or OEMs, while 57 companies completed Series A and Pre-Series A financing rounds. Most of the investment is poured into high-tech automotive domains, including driving automation, sensors, semiconductor intelligent connected vehicles, battery, and vehicle manufacturing. Autonomous driving continues to be the brightest investing area accounting for more than 20%.

Due to the incentive policy, increasing consumer demand and the support of capital, EqualOcean forecasts that by the year 2030, vehicle sales will reach 40.30 million units. 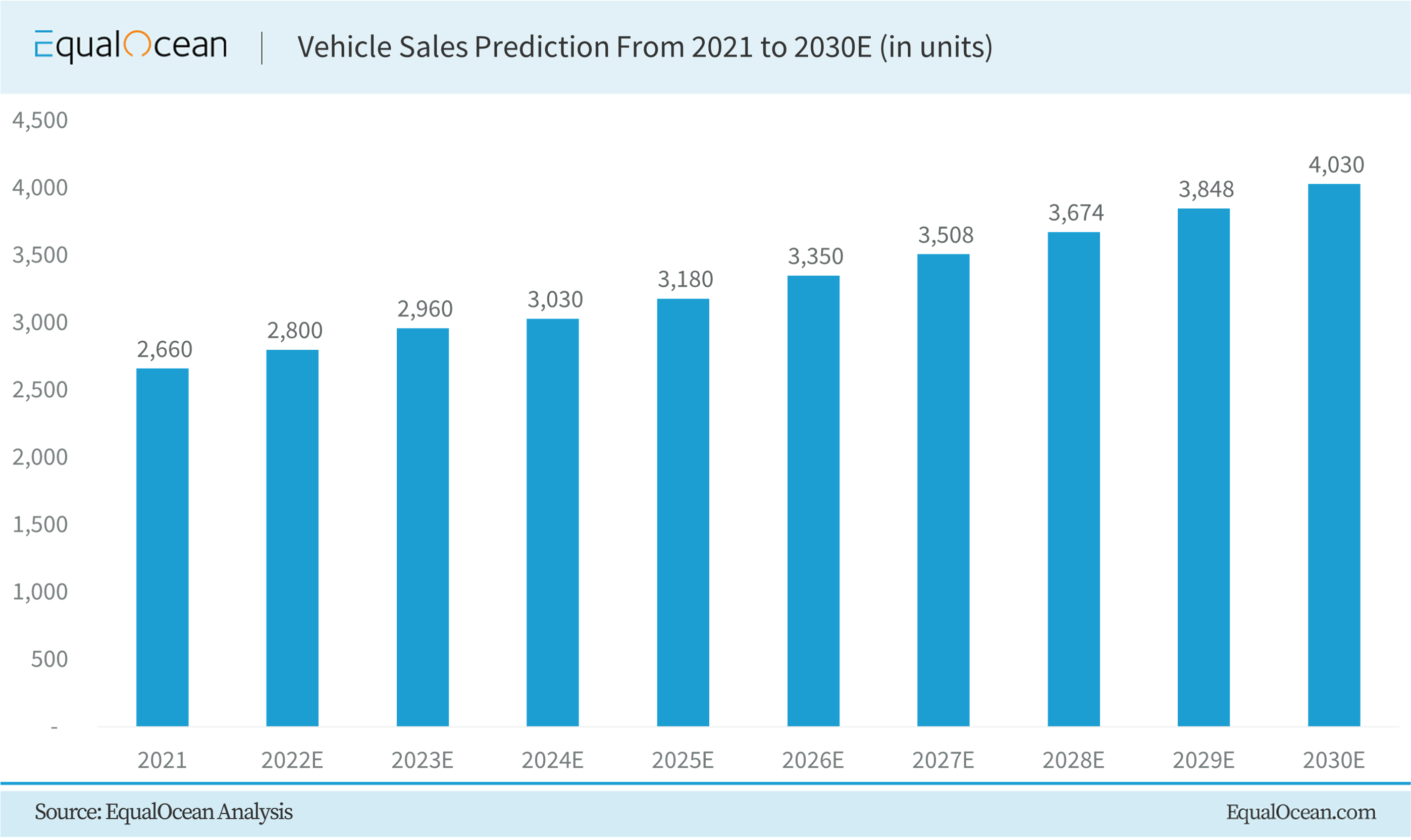 The global structure of power battery companies has taken shape. In 2021, CATL, LG Energy Solution and Panasonic ranked the top three, and BYD ranked fourth. And the Matthew effect in the market competition is significant. The top three companies accounted for 65.1% of the market share, while the top 10 for 91.2%. Many more companies were left behind and proved less competitive – so, as a whole, the competition has become fierce and entered the stage of elimination.

Since Q2 of 2021, the prices of raw materials such as lithium (represented by lithium carbonate), nickel, and cobalt have skyrocketed, resulting in a higher cost of power batteries. Then the price pressure was transmitted to downstream firms from February to March 2022, so car companies increased their prices accordingly to CNY170/KWh (USD25.36/KWh). On the other hand, since Q2 of 2021, the market share of Lithium iron phosphate power batteries in China has surpassed the ternary lithium with a lower relative cost. We believe that Lithium iron phosphate power battery is more prevalent in the market for its low increase in price and better cost performance. 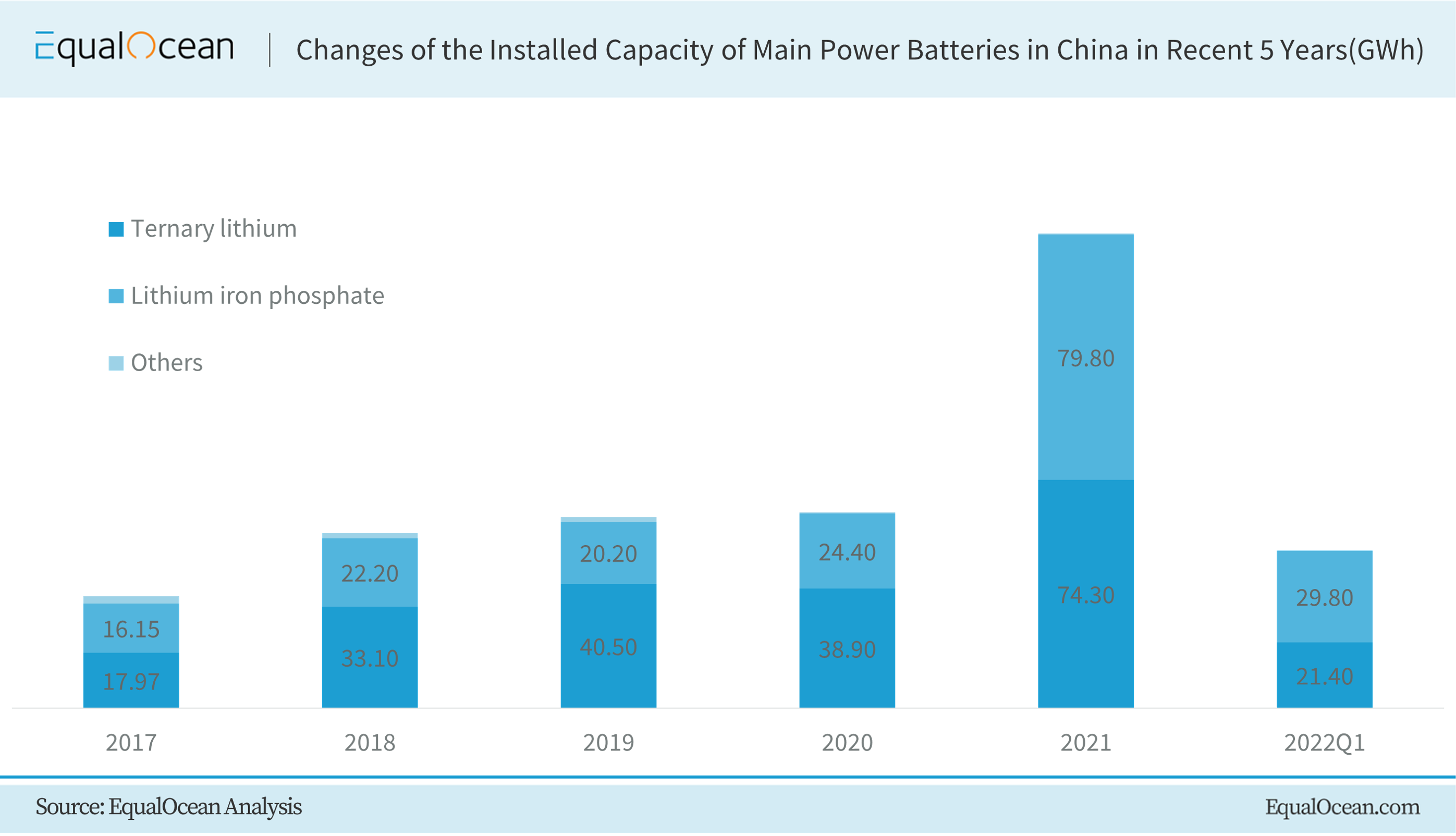 Semiconductor: shortage will recover, and the automotive semiconductor market size will amount to USD 51.5 billion by 2030

Since the first quarter of 2021, the global semiconductor shortage has wreaked havoc on assembly lines worldwide, slowing the production process of everything from smartphones to home appliances and, more significantly, driver-assistance systems. Disruptions in the automotive industry have come to the fore from the beginning of the COVID-19 pandemic. Auto sales plummeted worldwide: down 80% in Europe, nearly 70% in China and 50% in the United States. As OEMs and Tier 1 suppliers cannot guarantee sufficient quantities of semiconductors and must delay vehicle production, automotive revenues are nosediving. 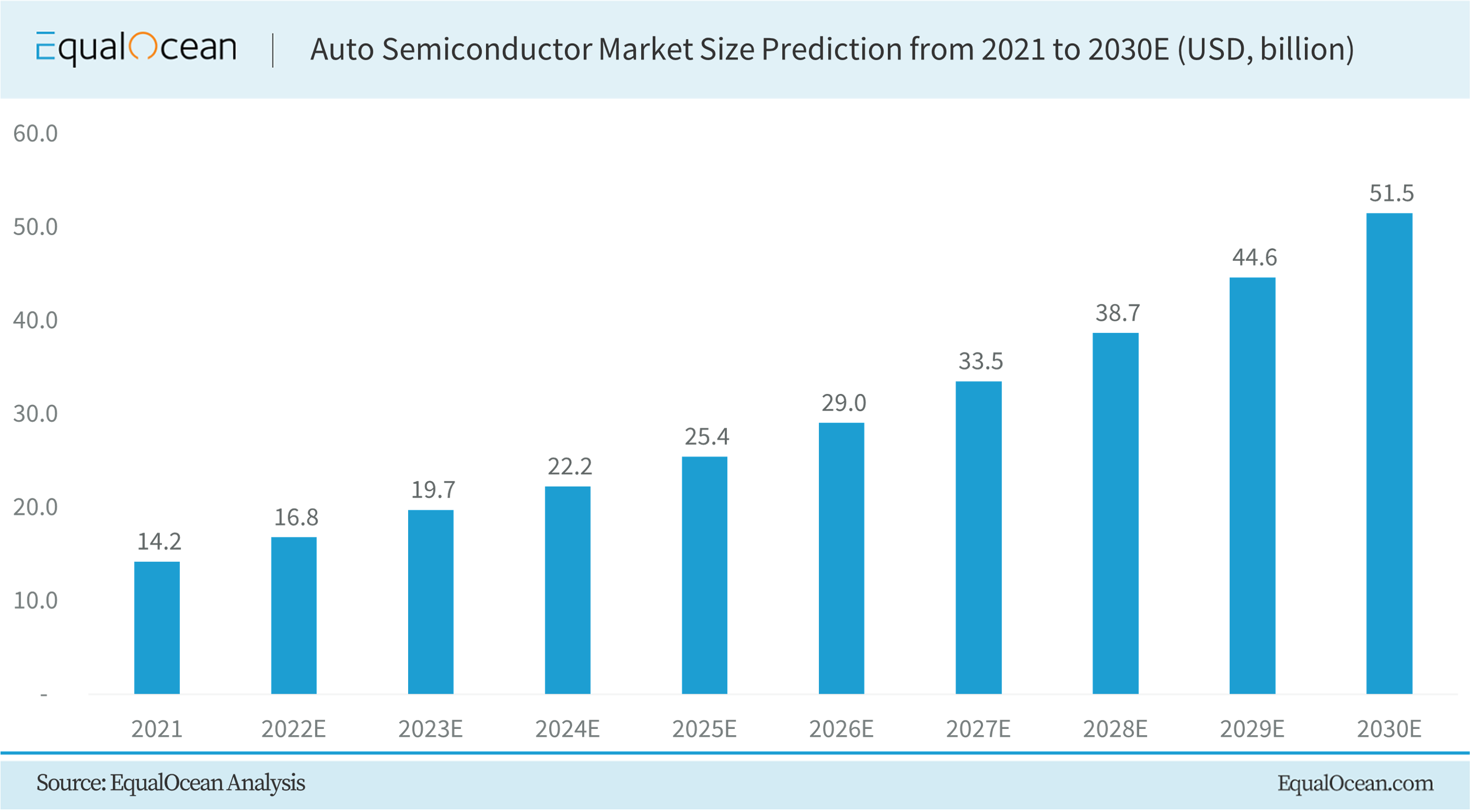 Sensor: markets will weather through the storm and reach CNY 60 billion in 2025.

Also, the sensor plays an essential role in autonomous driving. Under normal circumstances, driving automation solutions providers would use three types of built-in sensors, namely, cameras, MMW radars and Lidars, to map the surrounding environment and calculate distances and the velocity of moving objects. Each device has its pros and cons. For example, radar’s transmission of radio waves will not be affected by visibility, lighting or noise, but limitations, including low-definition modeling, hold the device back. Lidar is highly accurate thanks to its significant amount of computing power, but this turns out to be a double-edged sword, for it is also prone to system malfunctions and software glitches. The third option, which processes camera-captured imagery into data to be analyzed through algorithms, also recognizes road conditions and is relatively cheaper than LiDAR and radar. However, it is hobbled by low visibility under adverse weather conditions.

2022 is a challenging year for sensoring manufacturers as the industry is facing multiple challenges, such as soaring raw material prices, semiconductor shortages and the coronavirus outbreak in cities of China. The increasing raw material costs and prolonged semiconductor shortages are slowing the market growth. However, we believe the market will weather this challenging period given a spate of tax breaks, faster production resumption, and other policy incentives. Moreover, the rapid development of NEV and autonomous driving technology is stimulating the demand for sensors.

According to EqualOcean, the automotive sensors market will reach CNY 60 billion in 2025 with an average annual growth rate of 22%. 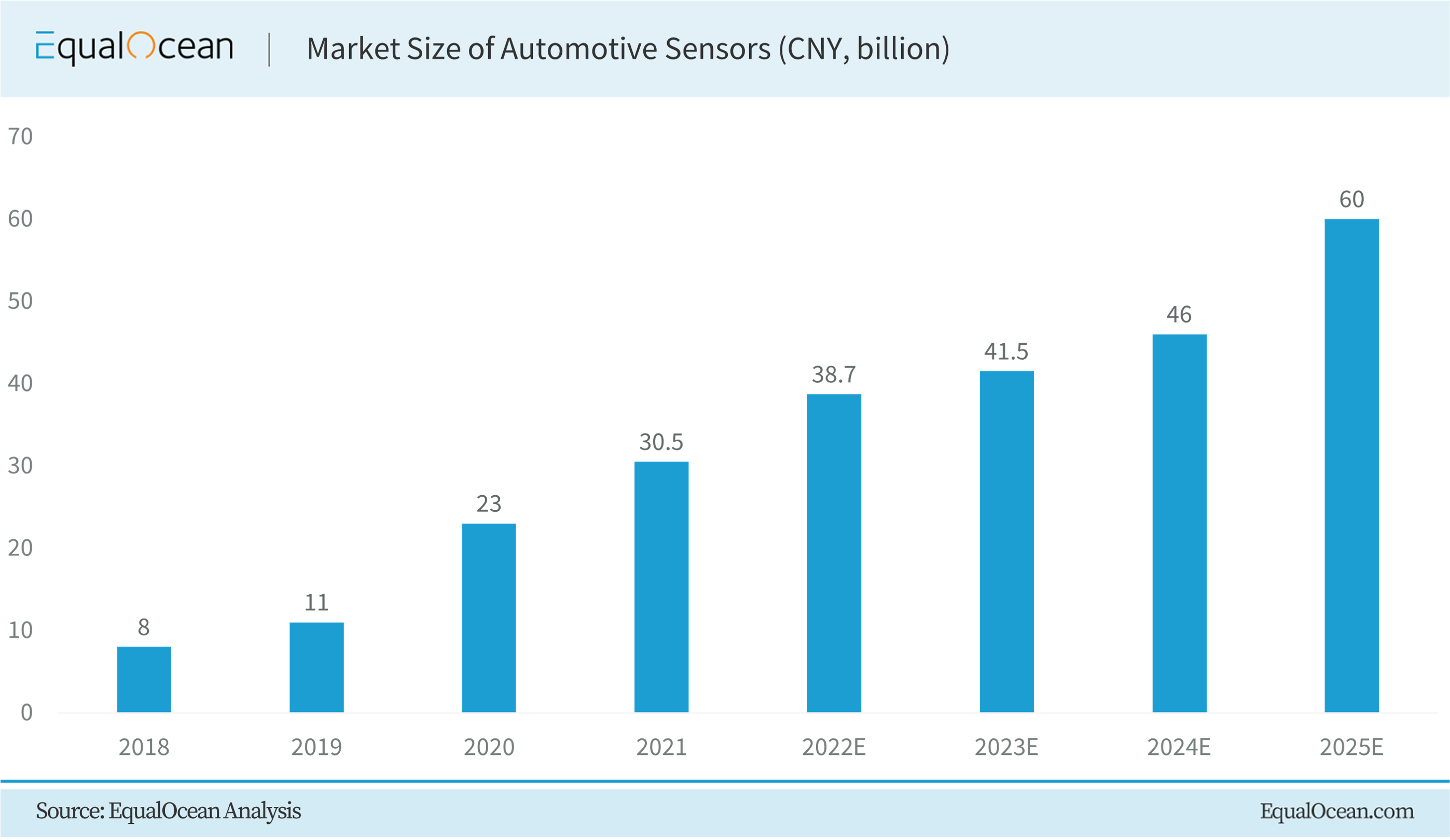 Chuhang Technology (Chinese: 楚航科技) is one of the four dragons of MMW radar providers in China. It is dedicated to developing and producing 77 GHz to 79 GHz MMW radar sensors for Advanced Driving Assistance Systems (ADAS) and Automated Driving (AD) applications. The company completed its Series B financing round. Notably, Chuhang's factory in Anqing enjoys a production capacity of 1.8 million units. Its Shanghai factory will start operation by the end of 2022, with a production capacity expected to reach 5 million units. In addition, Chuhang has strong strategic cooperations with various organizations, universities, and companies, such as NTCAS, Shanghai Jiao Tong University and HELLA.

Benewake (Chinese: 北醒科技) is a Beijing-based LiDAR provider, focusing on  autonomous driving, CV2X, rail transit, civil aviation, shipping and industrial applications. Benewake owns over one hundred patents and exports its LiDAR products to over 60 countries and regions worldwide. The company provides a full range of businesses in China and abroad. The LiDAR product shipment of Benewake was over 600,000 units in 2021, sold to more than 60 countries and regions worldwide. The company’s overseas revenue took 50% of its total revenue in 2021.