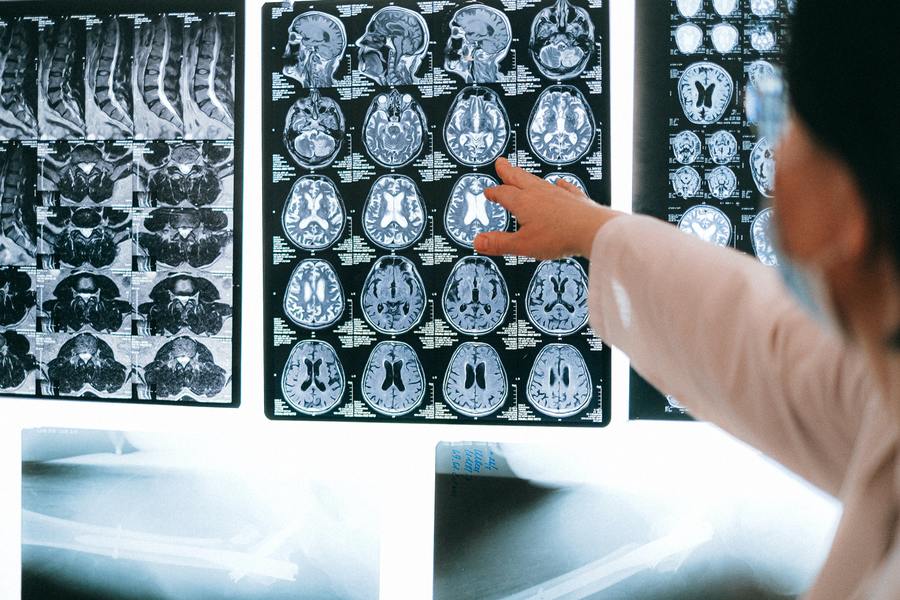 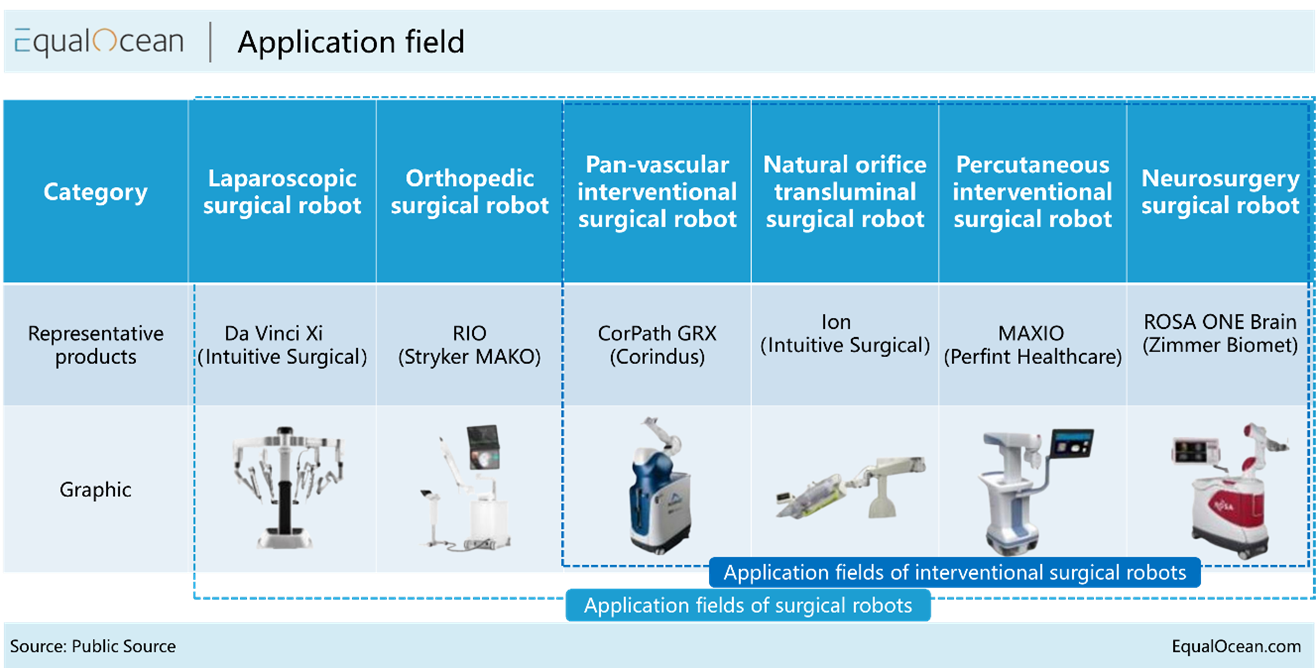 In light of market share, the United States accounts for more than half of the global surgical robot market, with significant room for improvement in market penetration in Europe and China.

Despite the potentially massive demand for surgical robots for routine minimally invasive procedures in China due to its high population base, the size of the Chinese surgical robot market was only USD 425 million in 2020, accounting for only 5.1% of the global market. For interventional surgical robots, the international competitive landscape is the same, with the United States, Europe and other developed regions being the leading markets.

As medical technology evolves and people's medical needs improve, the burgeoning field of interventional medicine has played an integral role in clinical application. Minimally invasive interventions have developed rapidly in various areas, including cardiovascular, neurology, aortic and peripheral vascular, endoscopy and oncology. The global market for interventional surgical robots is booming, and there is a blue ocean for the Chinese market.

Robot-assisted pan-vascular surgery in China is still at a relatively early developing stage. In China, the market size is expected to reach USD 180 million by 2026 due to the increasing prevalence of coronary artery disease and the gradual improvement in the availability of pan-vascular surgical robots. 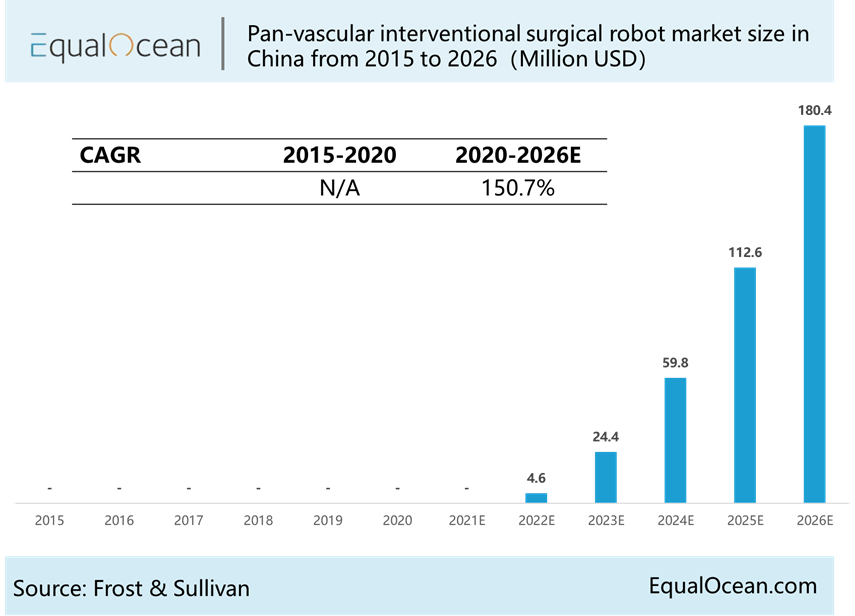 The global market for natural orifice transluminal surgical robots has been expanding recently. China's first batch of natural orifice transluminal surgical robots is expected to be commercially available in 2023, when the market size will reach CNY 51 million (USD 7.06 million) and continue to grow to CNY 3.55 billion (USD 490 million) in 2030, with a CAGR rate of 83.6%.

Robot-assisted natural orifice transluminal endoscopic surgery (NOTES) is a new surgical technique that breaks the limit of the development level of instrument technology. It can diagnose diseases and perform surgery by placing a controlled flexible endoscope in natural orifices, such as the respiratory and digestive tracts.

The volume of robot-assisted NOTES operations in China will exceed 100 in 2023 and is expected to exceed 153,000 by 2030, representing a CAGR of 184.5%. In China, no existing natural orifice transluminal surgical robot products launched in the United States or the European Union have received NMPA approval. 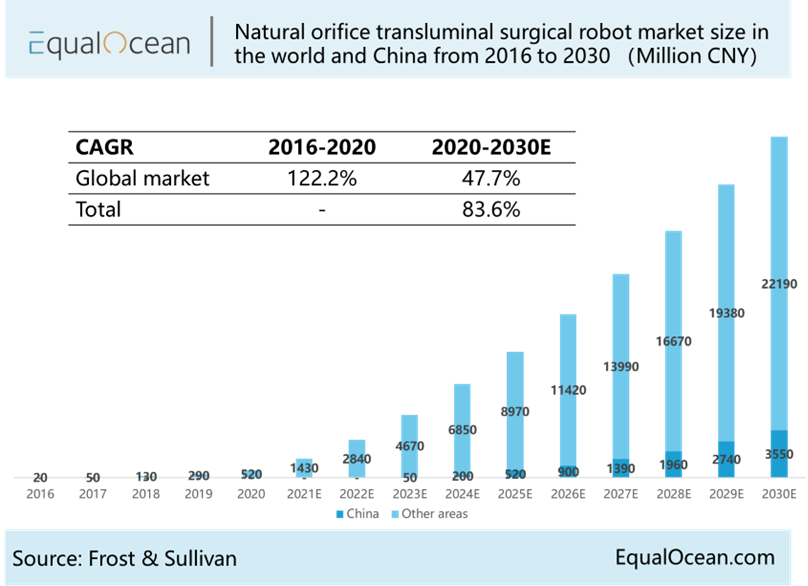 Percutaneous surgery is prevalent worldwide as a standard diagnostic and therapeutic procedure and is expected to increase steadily in the coming years. 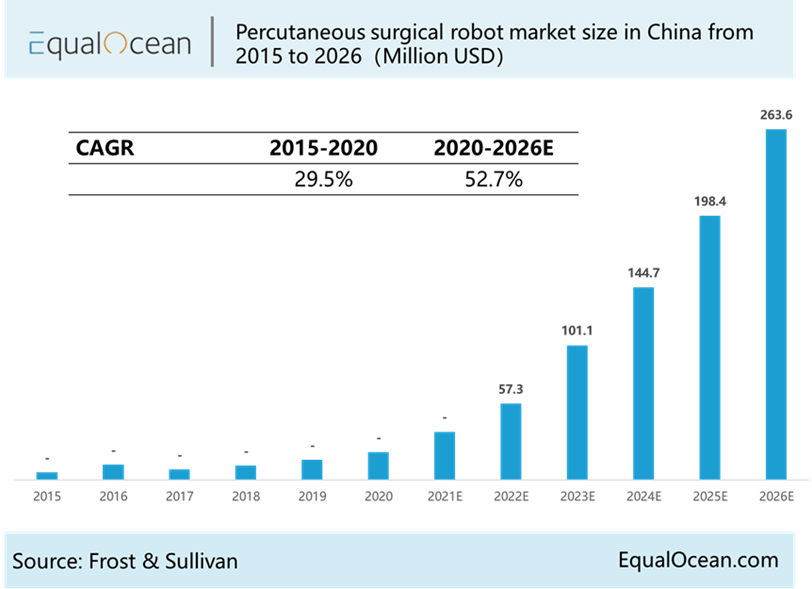 Force feedback is the sensory nerve of interventional surgical robots, but its clinical application is not yet mature. Based on force feedback technology, the interventional surgical robot can accurately perceive the instrument force during the procedure and transmit the instrument resistance to the physician in real time. The slave manipulator can transfer external forces back to the master console, but the forces at the two ends are not transmitted by 1:1, which needs to be adjusted on demand. In practice, the friction between the instruments and the sterile sleeve also affects the accuracy of force feedback. Moreover, due to the master-slave operation, delays in force feedback will disrupt the physician's operation pace and cause the loss of real-time control of the manipulator, especially in the remote control. Tactile feedback, another crucial sensory information, is still in the research stage.

Image navigation is the eye and brain of interventional surgical robots. Vascular interventional surgery is performed under the navigation of images. Presently, 2D angiograms, the primary navigating images in clinical practice, suffer from severe tissue overlap problems and are difficult to direct physicians to operate instruments. Surgical image navigation should be able to integrate various types of medical images, such as CTA (Computed Tomography Angiography) and MRI (Magnetic Resonance Imaging), and reconstruct the 3D vascular model of the patient so that physicians can observe the overall morphology of the lesion and its relationship with the surrounding structure.

Covering the whole process of interventional procedures is premised on satisfying the coordination of multiple instruments. Some vascular interventional surgical robots can only push guide wires, catheters or stents individually and cannot adequately simulate physician operations, requiring human assistance. If the wire is withdrawn from the guide catheter before the contrast agent is injected, manual manipulation is needed, and physicians are still exposed to radiation.

The breakthrough of a single technology is only a matter of time. The iterative speed and clinical adaptability of interventional products are critical barriers. We expect the advent of interventional surgical robots that are more aligned with physician usage habits and more accessible for clinical applications.

CONTACT US
Scan QR code to contact us for professional consulting services
Next article
Opportunities, Challenges and Trends in the Domestic Thriving 3D Machine Vision Industry