This article introduces the market dynamics and trends of China's sanitation self-driving market. Specifically, the article presents the driving forces, application scenarios, business models, multiple players in the competitive landscape, and challenges. Also, the article brings you unique insights from executives and industry experts in industry-leading and fast-growing companies regarding technological know-how and business modes in the field.

The traditional sanitation industry has been faced with severe problems including difficulty with recruitment, poor working conditions, high labor costs, and frequent occurrences of accidents. Yet applying autonomous driving technology to this traditional industry can solve these problems via cost reduction and efficiency improvement, for autonomous driving sanitation vehicles are expected to decrease labor and management costs and avoid accidents drastically. 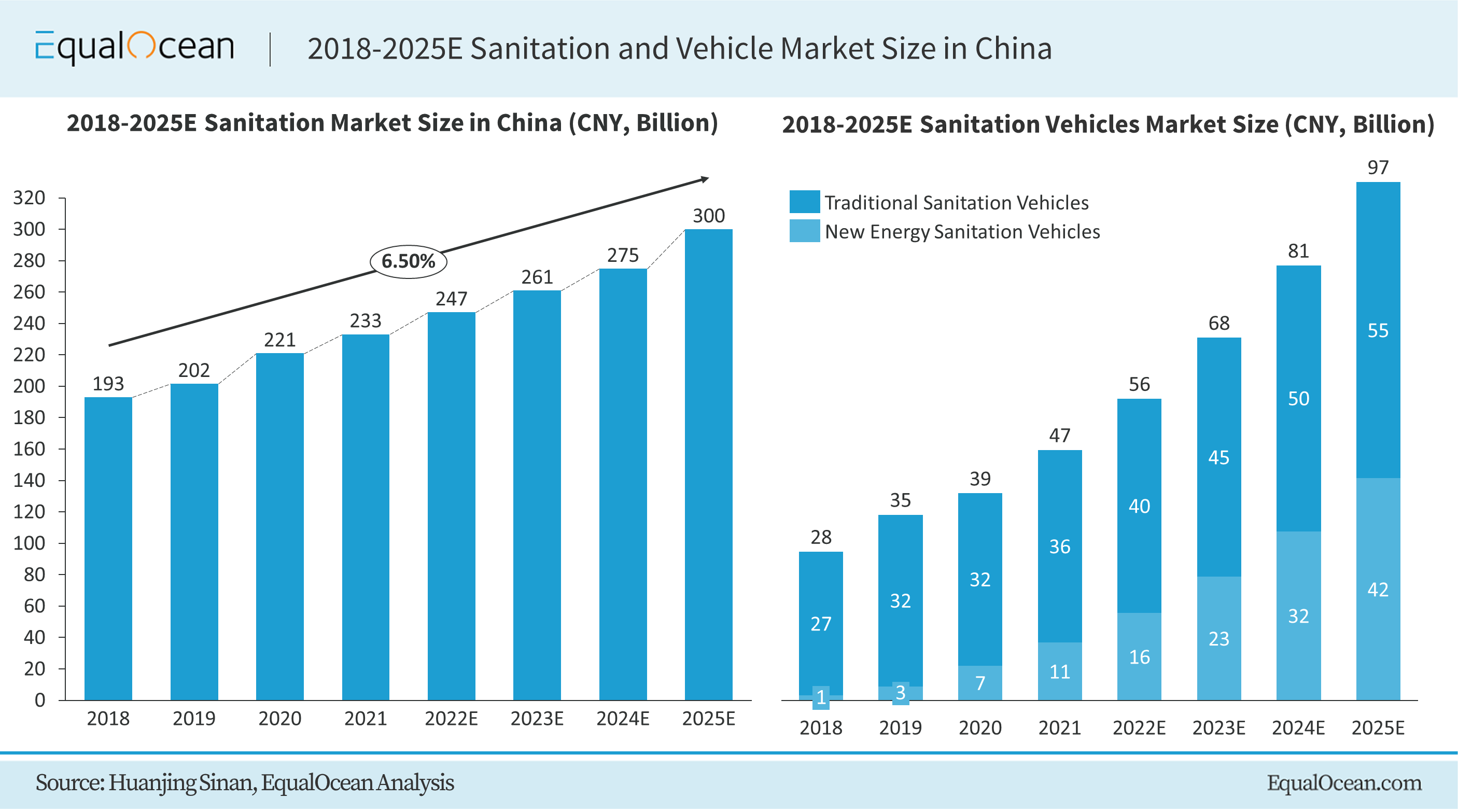 Sanitation has been an ideal commercialized application scenario for L4 autonomous driving technology.

Under the constraints from policy and ethics of humanity, realizing commercialization of self-driving passenger cars still faces many challenges. Meanwhile, various autonomous driving applications have been continuously excavated, such as transportation in harbor and mining areas and sanitation self-driving. Due to the loose requirements for running speed and comfort, fixed routes and numerous closed and semi-closed scenes, sanitation scenarios make it easier to achieve the commercialization of L4 autonomous driving.

To begin with, compared with traditional sanitation vehicles, autonomous driving vehicles only need several workers to superintend the cars and wind up the waste left over, which can reduce approximately 60% of the labor input. Furthermore, because of the hostile working environment, the price of working hours at night is higher. At the same time, the probability of driving accidents occurring at night is also higher, resulting in unnecessary costs. Meanwhile, some of the core components of autonomous driving are gradually replaced by domestic products, effectively reducing procurement costs and promoting the commercialization of autonomous driving sanitation.

Dr. Qingxiong Yang, Vice President of WeRide(Chinese:文远知行) and an expert in the autonomous driving field, introduced WeRide's driverless sanitation vehicles technology and their business planning in an exclusive EqualOcean interview. According to his statement, only when a model achieves mass production of factory-installed products can it have the opportunity to support its large-scale commercialization. Especially for the self-driving sanitation industry, scaling effects can only be realized through reaching a certain product capacity, under which smart sanitation can eventually be applied.

In conclusion, although in the short run, the price of self-driving sanitation vehicles is relatively higher, it will eventually go down with cost reduction and efficiency increase in the long run. 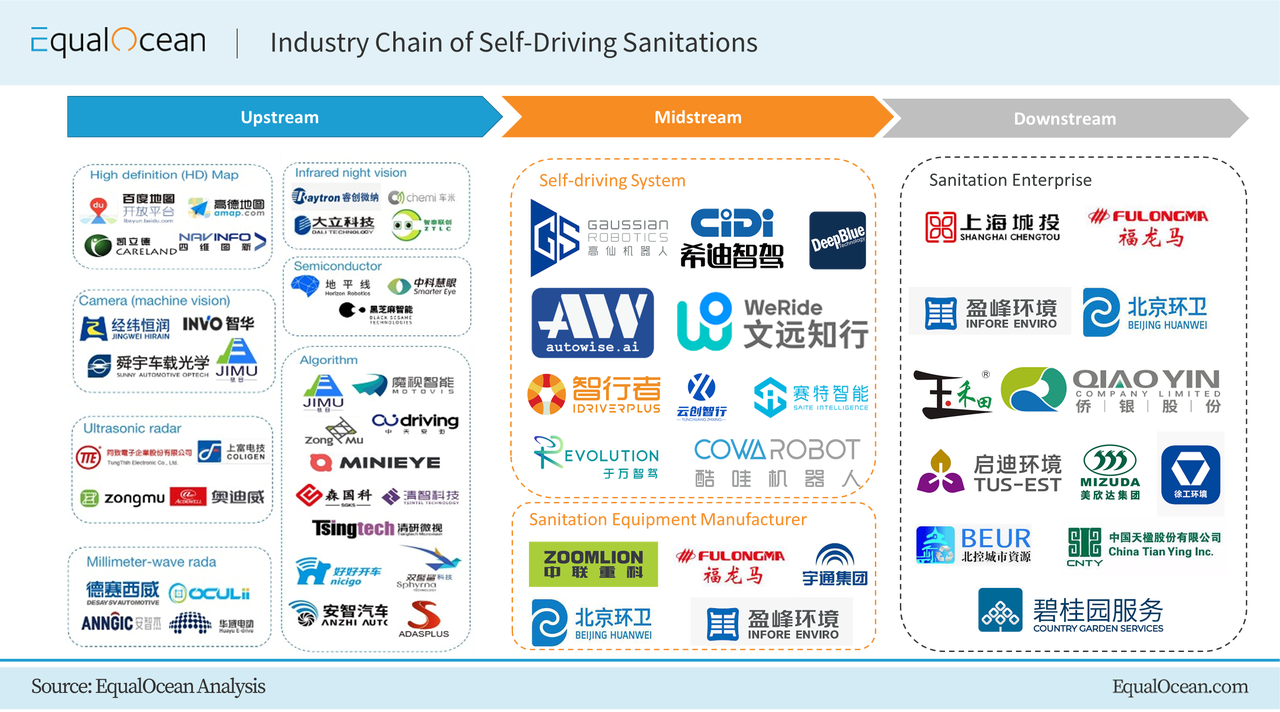 Most of the application scenarios are closed and semi-closed, gradually expanding to fully open scenes.

According to Mr. Tang's statement, Autowise.ai has chosen to lay emphasis on urban sanitation scenarios in consideration of its commercialization realization. Aside from common closed scenes including industrial parks and schools, Autowise.ai has made a breakthrough, applying its products to semi-closed scenes, such as tunnels, and fully open scenes, like narrow streets and side roads.

Besides, Dr.Yang told us that WeRide launched its Robo Street Sweepers on open roads in the southern metropolis of Guangzhou this September. And the Robo Street Sweeper is known as the first mass-produced and purpose-built self-driving sweeper vehicle in China.

Introduction of business models in the Chinese self-driving sanitation market.

There are four business models of self-driving sanitation:

In Mode 2, technology corporations and sanitation enterprises set up a joint venture to provide sanitation services.

In Mode 3, sanitation enterprises serve as service providers independently by establishing their technology department or M&A.

According to Mr. Tang's statement, Autowise.ai has chosen to lay emphasis on urban street cleaning sanitation scenarios to realize in consideration of its commercialization realization easiness. In terms of Autowise.ai's business model, the company operates autonomous driving sweeper fleets and owns contracted projects in many cities in China (Mode 1).

Furthermore, for their future business model consideration, Mr. Tang said, the global market will be seen as an integral part of Autowise.ai's business emphasis. And the European market has been the primary focus thanks to the company's collaborations with well-known local automakers. In the future, Autowise.ai will continue to expand overseas markets, aiming at setting foot in North America, Middle East and other growing markets in Southeast Asia. Besides, considering future mature applications of remote operations and realization of autonomous driving on-the-scene, scalable scaled business operations can be facilitated and achieved in this industry.

Multiple players crowd into the industry, and the Chinese sanitation market is highly fragmented.

Unlike self-driving sanitation sweepers, sanitation robots, including products from Gaussian and IDRIVERPLUS, can not be applied in open scenarios with a relatively weaker cleaning ability. They mostly appear in property services, including shopping malls, office buildings and hotel internal ground cleaning.

Equipment manufacturers, including Yutong and FULONGMA, have strength in hardware and production capacity. Compared with technology firms, these companies have a better understanding of the sanitation industry. Also, with years of development in sanitation, they have established solid customer relationship.

Self-driving technology companies, such as Autowise.ai and WeRide, have advantages in building algorithms and software development. Dr. Yang told us that in a closed and a semi-closed scene, self-driving sanitation vehicles are mainly responsible for dealing with sanitation problems, ensuring accurate identification of debris and high-precision positioning while performing road edge sweeping. However, sanitation vehicles should lay more emphasis on safe driving in a fully open scene. It is noted that these vehicles would usually avoid peak traffic hours and specific situations, such as storms, for efficiency reasons.

In terms of the competitive landscape, Dr.Yang and Mr.Tang both stated that, at present, the market is highly fragmented, bringing potential opportunities for private enterprises and start-ups.

One major challenge of the self-driving sanitation field is the technological barrier.

Traditional sanitation companies which collaborate with technology firms will possibly stand out from the competition, considering the technological barrier of the autonomous driving industry and the marketing resources needed for accomplishing sanitation projects.

Relevant policies need to be facilitated to support future development of the market.

Self-driving sanitation is the cross-application of autonomous driving technology, which is also restricted by laws and regulations. As stated by Dr.Yang, one of the notable challenges is that China's relevant policies have yet to open up in this area entirely.

Furthermore, Dr.Yang told us that only a few cities, such as Guangzhou, Beijing and Shanghai have promulgated policies regarding self-driving sanitation. Also, WeRide launched its Robo Street Sweepers on open roads in the southern metropolis of Guangzhou this September.

Although the open scenario application of medium and large-scale sanitation vehicles has been piloted in some areas, the whole industry urgently needs laws and regulations to promote the standardized and rapid development of the industry.

CONTACT US
Scan QR code to contact us for professional consulting services
Next article
Exclusive Interview | Dr. Wang at LAIYE: Digital Workforce is the Key to Future Success