We at EqualOcean tracked the major funding rounds or industry events that took place in China’s automotive market in November 2022. And the following is a list of deals that we have selected for you, based on a number of criteria, including the funding amount, the financial backers, and the segments in which the companies operate. 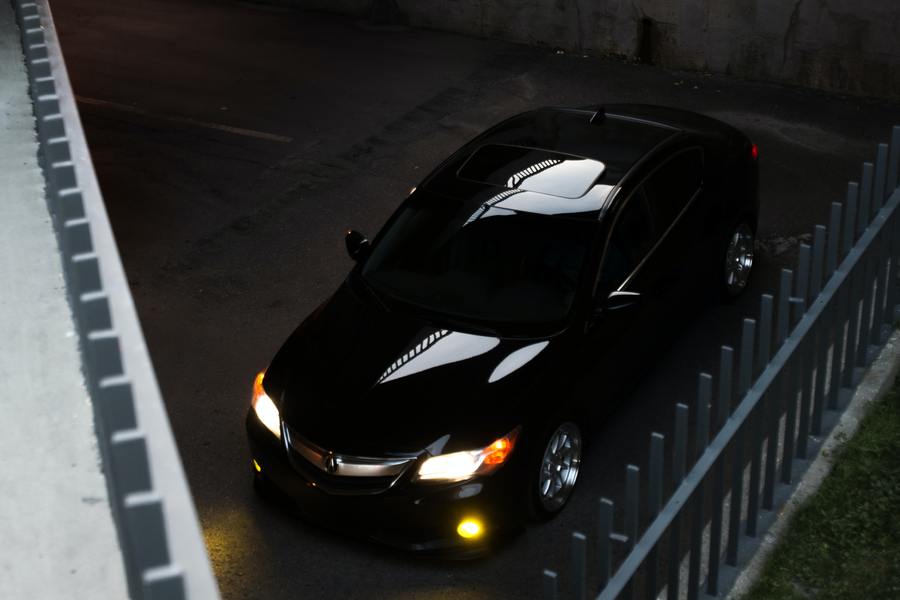 On November 28, ADAS solutions supplier Freetech (Chinese: 福瑞泰克) completed B round of financing worth nearly USD 100 million, which was led by Chaos Investment (Chinese: 混沌投资). Freetech, founded in 2016, is a Hangzhou-based innovative high-tech enterprise that owns core intellectual property and solutions in ADAS, with established international technical leadership in intelligent driving.The fund will be used for product R&D and supply chain optimization, promoting the commercialization of autonomous driving. 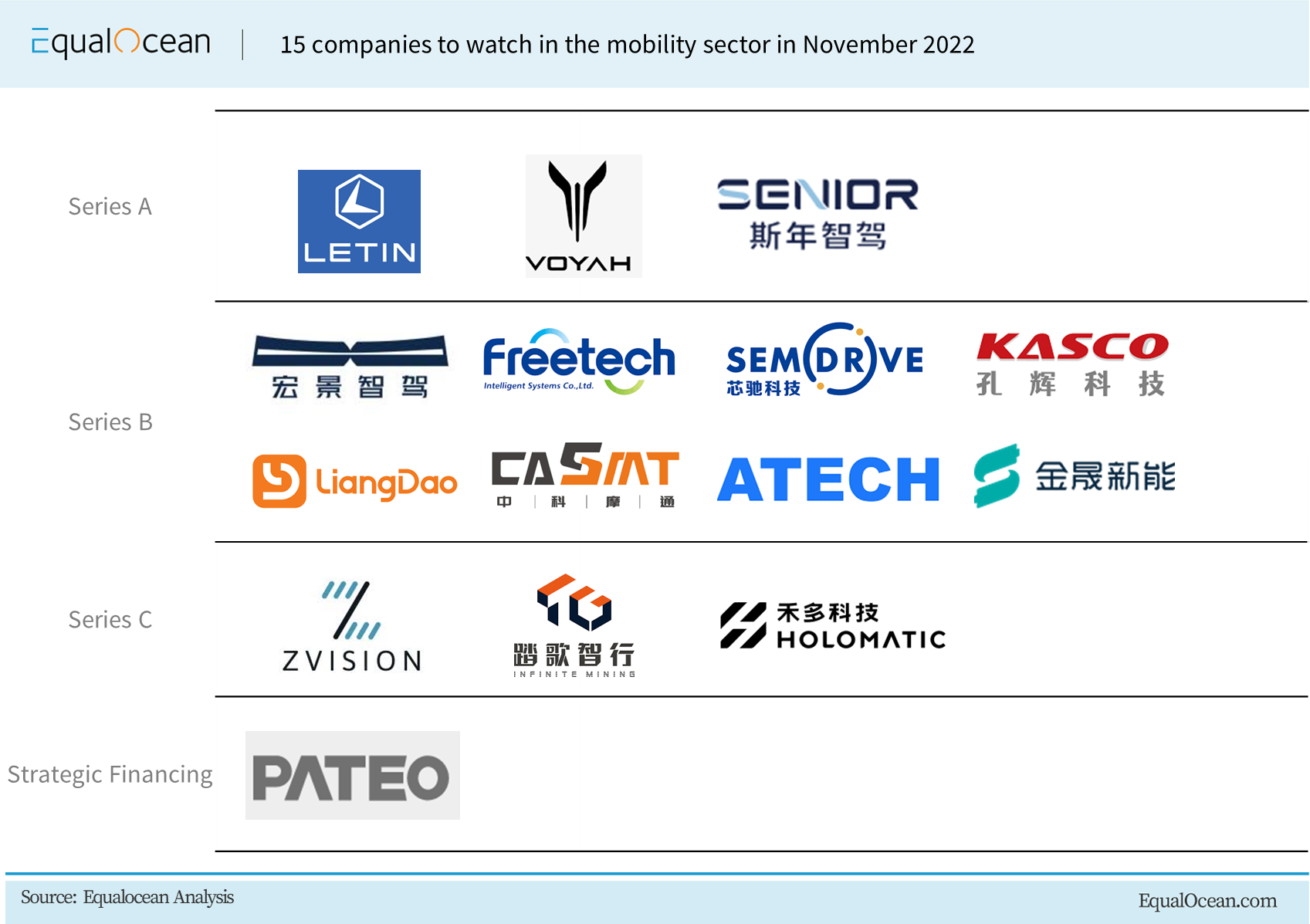 In November 2022, HoloMatic (Chinese: 禾多科技) announced that the company successfully bagged a C2 round of financing worth hundreds of millions of CNY, led by GAC Capital (Chinese: 广汽资本) and followed by Chaos Investment (Chinese: 混沌投资) and Guangzhou Zhidu Investment (Chinese: 智度资本). Founded in 2017, HoloMatic is a Beijing-based company which has been focusing on utilizing cutting-edge technologies including AI and automotive engineering to promote the mass implementation of domestic data-driven autonomous driving solutions. The investment will primarily be used for continuous R&D of high-level technological innovation in autonomous driving, mass production and more. Up until now, the amount of investment HoloMatic secured from its C round financing has amounted to USD 100 million.

On November 21, auto maker Letin (Chinese: 雷丁汽车) announced its completion of A-round financing amounting to CNY 3.2 billion, which was led by Weicheng West Investment Development Group (Chinese: 潍城西部投资发展集团) from Weifang city, followed by some SOE capital and private equity firms in Shandong province. It is reported that the fund will be used for product R&D, marketing investment, capacity building and market expansion. Letin, founded in 2008 and based in Shandong, is China’s electric vehicle brand focusing on the research and development, manufacturing and sales of electric vehicles and parts. The funds raised will be used for supporting R&D, marketing investments, establishment of digitization systems and production capability building.

In November, Zvision Technologies (Chinese: 一径科技) secured a new C-round of financing exceeding USD 10 million, a couple of months after the company completed its pre-C round of financing. The investment was led by Genesis Capital (Chinese: 元生资本) and followed by CITIC securities (Chinese: 中信证券), Z&Y Capital (Chinese: 卓源资本) and Yizhuang Capital (Chinese: 亦庄资本). Founded in 2017, Zvision has been dedicated to the R&D of MEMS LiDARs with high resolution and high reliability. Its products are mainly used in intelligent cars, robots, smart cities and other fields of artificial intelligence. This fund will be primarily used for Zvision's AI technological development of their Solid-State LiDAR, expansion of their production capacity, R&D of automotive-grade MEMS LiDAR solution, and commercialization.

On November 14, Beijing SENIOR Technology (Chinese: 斯年智驾) announced the completion of its A+ round financing worth more than CNY 100 million, which was led by Tsinghua Innovation Ventures (Chinese: 水木创投) and Winreal Investment (Chinese: 容亿投资), followed by Estar Capital (Chinese: 辰韬资本), GF Xinde Investment (Chinese: 广发信德), Shenzhen Zhiqing Corporation (Chinese: 智氢实业) and Hubin Capital (Chinese: 湖滨资本). SENIOR, founded in 2020 and based in Beijing, is an autonomous driving solution provider focusing on heavy truck transportation in the harbor scenario, including transportation in port, hub to hub and between ports. The fund will be used for product R&D, promoting the application of autonomous driving in harbor scenarios. After this round of financing, SENIOR acquired support from capital and industry.

On November 14, unmanned solution provider Beijing Tage Zhixing Technology (Chinese: 踏歌智行) announced the completion of its C1 round financing exceeding CNY 100 million, which was led by Jinsha Fund (Chinese: 金沙基金), followed by Boton Technology (Chinese: 宝通科技). Tage Zhixing, founded in 2016 and based in Beijing, is one of the "New Special Expertise" enterprises focusing on providing autonomous driving technology for mining vehicles. The fund will be used for product R&D, market expansion and supply chain construction.

On November 11, intelligent connected solutions supplier Shanghai Pateo Electronic Equipment Mfg. Co., Ltd. (hereinafter referred to as "Pateo") (Chinese: 博泰车联网) announced the completion of its strategic round financing worth hundreds of millions of CNY, which was invested by SOE fund, namely Rui'an Fuhai Equity Investment Fund (Chinese: 瑞安富海股权投资基金). Moreover, Pateo has received capital investment from SOE before, including Dongfeng Group (Chinese: 东风汽车), FAW Group (Chinese: 一汽集团), Shanghai Guosheng Group (Chinese: 上海国盛). Pateo, founded in 2009 and based in Shanghai, is an innovative high-tech enterprise committed to providing intelligent connected services and auto parts. The fund from this financing round will be used for the construction of a manufacturing base located in the Rui'an Economic Development Zone in Zhejiang Province.

On November 4, the LiDAR System supplier LiangDao (Chinese: 亮道智能) announced that it has recently completed a CNY 100 Million in its Series B1 funding round. The investors include Everest VC (Chinese: 朗玛峰创投), Before Capital (Chinese: 彬复资本), and State Development & Investment Corporation (Chinese: 国投招商). The company founded in 2017 in China and Germany, LiangDao is a global leading system provider of LiDAR sensors, providing industry customers with a full stack of LiDAR sensing systems, including automotive-grade LiDAR hardware, perception software, testing and validation and data services. The new funding will be used to accelerate the development of automotive-grade  LiDAR products, hire more talents, compete with the robotic factory setup and the verification of the fully automated production lines.

On November 2, lithium-ion battery recycling solution supplier JinSheng (Chinese: 金晟新能) closed its B+ round financing worth hundreds of millions of CNY, which was co-led by (Chinese: 达晨资本) and (Chinese: 基石资本). JinSheng, founded in 2010 and based in Guangdong, is a power battery recycling solution provider focusing on the comprehensive recycling and re-utilization of lithium-ion batteries. The fund is expected to be used for corporate governance improvement, capacity expansion and talent development. After this financing round, JinSheng has gathered battery manufacturers, automakers and 4S dealerships as its shareholders.

CONTACT US
Scan QR code to contact us for professional consulting services
Next article
Yuanpu Huang: Looking into China's Entrepreneurship and Innovation in 2023