Despite the many uncertainties facing the post-pandemic era, one thing is clear: China will continue to be the global consumer growth engine. In this article, we at EqualOcean presented the 2022 year-in-review. It is by no means exhaustive, but it may shed some light on what is to come in the future. 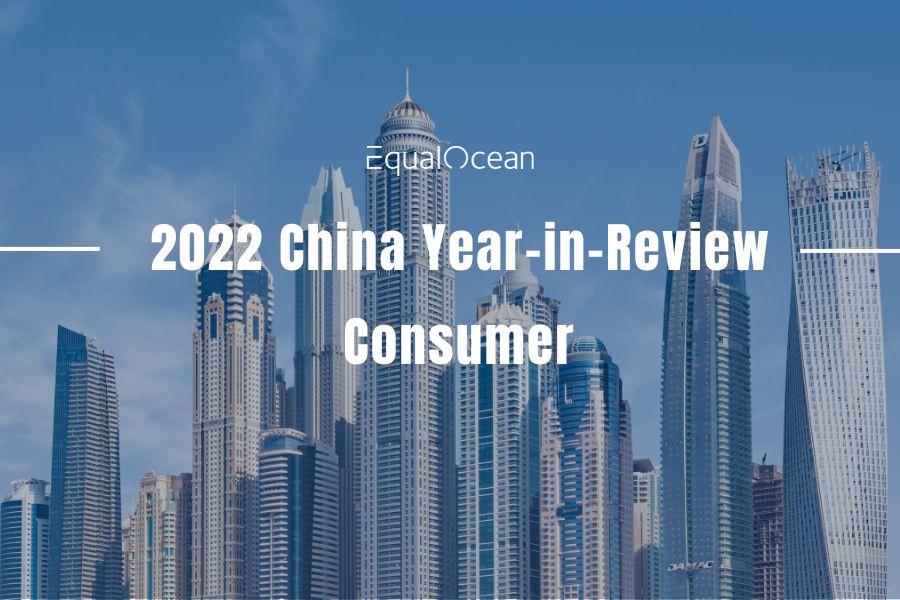 On December 19, the Central Committee of the Communist Party of China and the State Council issued Outline of Strategic Planning for Expanding Domestic Demand (2022-2035), highlighting the following:

We are committed to promoting service consumption, with an aim to expand cultural and tourism consumption. We will improve the culture industry and its market system, forster the development of high-quality cultural resources, and promote the creative transformation and innovative development of fine traditional Chinese culture. We will encourage cultural and heritage institutions to launch creative cultural products drawing on their collection of cultural resources and to expand the supply of high-quality cultural products and services. We will double down on promoting tourism. We will encourage the development of diversified, customized tourism products and services, and tourism products such as island tours, cruise ships, sky activities, desert tours. We seek to unleash the potential of general aviation consumption.

The Outline indicates that domestic consumption will drive national economic growth and China's consumer market will continue to increase in size. Besides, as China eases its strict COVID rules, the consumer sector is set to benefit as Chinese consumers ramp up spending and traveling.

Under the spotlight: coffee and tea-based beverage

The coffee and tea-based beverage segment has seen stiff competition despite the pandemic, with funding piling up and companies expanding their offline stores. According to statistics from Yilan, in the first half of 2022, the 17 major domestic coffee chains opened 3,075 new stores, making the number of their stores total 19,000; 15 major tea-based beverage brands opened 6,689 new stores and thus have over 65,000 stores in total. The segment expanded at full speed in 2022, and strong momentum often indicates increasingly fierce competition.

HeyTea and NAYUKI, who featured high-end tea drinks, began to cut their prices at the beginning of this year. HeyTea announced the price cut in January, stated in February that its future products will not exceed CNY 29 (USD 4.16), and promised not to increase the price of existing products. NAYUKI launched an inexpensive new series and promised to roll out at least one new product priced under CNY 20 each month. With the two high-end brands lowering their prices, tea-based beverage brands featuring affordable prices such as Mixue could face greater competition.

Another trend to watch is coffee brands and tea-based beverage companies joining forces. MANNER coffee announced on July 8 that they were buying stakes in Ahma Handmade. Meanwhile, tea-based beverage makers also invested in existing coffee brands, and some even decided to build new coffee brands. In some ways, their efforts to meet consumer needs and seek growth opportunities lead them to the same approaches.

The booming coffee and tea-based beverage business have also led to a wave of supply chain companies going public. In July 2022, Delthin, the syrups provider for well-known coffee and tea brands including Luckin, Starbucks, and NAYUKI, filed a prospectus with the Shenzhen Stock Exchange for an IPO. And Delthin is not the first beverage supplier to go public. Shanghai Bolex Food Technology, which provides ingredients for KFC and McDonald's, got approval for its IPO on the Shanghai Stock Exchange in May; NAYUKI's juice supplier Tianye Group submitted a prospectus to the Beijing Stock Exchange in June; Hengxin, who supplies Luckin and HeyTea with paper cups, is also preparing for an IPO.

As a new approach distinguishes itself from traditional e-commerce, live streaming has, to some extent, reshaped China's e-commerce landscape.

In 2022, the standardization level of China's live-streaming industry improved, with more categories and more diverse live-streamer styles introduced into the field. Major changes were observed in the categories of e-commerce goods: previously in live-streaming e-commerce, top streamers such as Li Jiaqi were mainly promoting cosmetics, daily necessities, and snacks. Luo Yonghao's participation in the game kicked off the live-streaming marketing of expensive products. His first streaming on Taobao in October received over 10 million views in just two hours and over 100 products sold out in six hours. After Luo's live streaming, cellphones, computers, and other tech products made their way onto the list, and even more unexpectedly, cars, rockets, and apartments were seen in live streaming. Oriental Selection, on top of daily necessities and expensive tech products, promoted agricultural and cultural products.

Dong Yuhui became a household name in June 2022, after his bilingual live streaming on Oriental Selection Live went viral. In just a few days, millions of fans flooded into the shop, making his single-day sales skyrocket to over CNY 10 million. Combining teaching and live-streaming marketing, New Oriental Education innovated a new style of live streaming and made a successful transformation after the hit of the government's "double reduction" policy.

Liu Genghong, singer and fitness coach, is another celebrity who became a hit in 2022. His workout streaming, featuring a happy vibe and Jay Chou's well-known song, attracted over 70 million followers on Douyin. He tapped into the need to stay fit while staying home amid the pandemic and pumped up sales of protein powder and sweat suits in his live streaming.

So far, China's three major e-commerce giants, Alibaba, JD.com and Pinduoduo , have all chosen to expand into overseas markets.

Alibaba expanded its overseas business earlier with its overseas e-commerce platforms such as AliExpress, Lazada and Trendyol. Jingdong's "Jingdong Global Trade," which officially opened for operation on June 18, 2022, focuses on the North American and Southeast Asian markets.

Temu's first stop abroad was the United States. At present, Temu's PC and App versions have been launched mainly to meet the consumption habits of American consumers who prefer to use PCs for online shopping.

Compared with the Chinese version of Pinduoduo, Temu's web page style is more concise, and the quality of product images is higher. In addition to the letters TEMU, the orange logo also features dresses, toy horses, high heels and luggage patterns, in line with Temu's current main categories.

According to the General Administration of Customs of China, the scale of China's cross-border e-commerce imports and exports reached CNY 1.98 trillion in 2021, an increase of 15% year on year. Among them, exports were CNY 1.44 trillion, up 24.5% compared to the same period last year. However, some Chinese sellers have been in a difficult situation in the past two years due to the influence of policies and compliance of overseas e-commerce giant platforms. Against this background, cross-border e-merchants began exploring multiple platforms' layouts.

Beijing 2022 Winter Olympics created a fitness fad nationwide, pumping the popularity of many winter sports in 2022. People subscribed to new experiences and relaxation and were keen to break into new social circles and meet new friends through playing these sports.

After the pandemic, outdoor sports such as skiing, hiking, frisbee, cycling, and skateboarding have become popular. Data shows that from January to June this year, GMV of live-streaming on camping-related products grew 70% year on year; camping products on the Ctrip platform saw a growth rate of 800%. According to an analysis from big data solution provider Analysys, China's camping market size was expected to reach CNY 52.8 billion in 2022. Other camping equipment brands, including Naturehike and ABC Camping Country, also received funding in the first half of the year. Moreover, camping equipment renting, meals, and other camping-related businesses are also booming. During the May Day holiday, the turnover of picnic supplies, hammocks, tents, mats, and similar products on JD.com grew over 100% year-on-year.

In addition to outdoor equipment, sportswear demand has also seen a great boost with outdoor activities becoming the new fashion. As more and more young women participate in frisbee, VCs see an emerging wave. A previous successful case to look at is Lululemon, whose market value soared over CNY 200 billion after its yoga pants became wildly popular. A new round of competition among products targeting new middle-class female consumers had just begun.

While frisbee and camping are niche sports that most people could take part in, new trendy sports like skateboarding, fishing, and paddle boarding are a bit expensive to try. Take skateboards, it might cost a beginner around CNY 5,000 to start the game, as they need to spend an average of CNY 1,500 to CNY 3,000 on a skateboard and a fair chunk on protective gear, skate shoes, and basic training course. Nevertheless, this does not stop skateboarding from becoming a new hobby for middle-class young people. Skateboards priced over CNY 1,000 sold out easily within three days, and the monthly wages of skateboarding coaches reached CNY 100,000. Skateboarding is expected to be the next big thing.

China has become one of the fastest-growing medical aesthetic service markets in the world. According to Deloitte in its "China: Medical Aesthetic Industry Outlook 2022," consumer demand in China is expected to maintain a growth rate of more than 10% in the future. The booming medical aesthetic industry is certainly drawing investors' attention.

Biomedical product maker Imeik Technology Development went public on Shenzhen Stock Exchange in 2020 and saw its market cap top CNY 100 billion in 2021. Imeik acquired botulinum toxin technology patents held by Huons Bio, a leading pharmaceutical and medical device company in South Korea, by buying 25.4% of its share for around CNY 886 million, thus expanding its business and entering the global botulinum toxin market. In June this year, the company submitted a prospectus to the Hong Kong Stock Exchange for an IPO.

Bloomage BioTechnology, which went public on the sci-tech innovation board of the Shanghai Stock Exchange in 2019, achieved a significant year-on-year increase of nearly 88% in revenue in 2021 and continued to break new highs in sales in 2022. In the first three quarters of the year, Bloomage BioTechnology's revenue reached CNY 4.32 billion, up 43.43% over the same period last year.

The eye-catching performance of the two biomedical suppliers also brought new competitors to the market. Entrepreneurs started to explore the market of offline medical aesthetic services. Offline "light" medical aesthetic clinics became a new go-to place for young people, especially at the end of the year. The emergence and convenience of retail medical aesthetic products have created new opportunities for the industry.