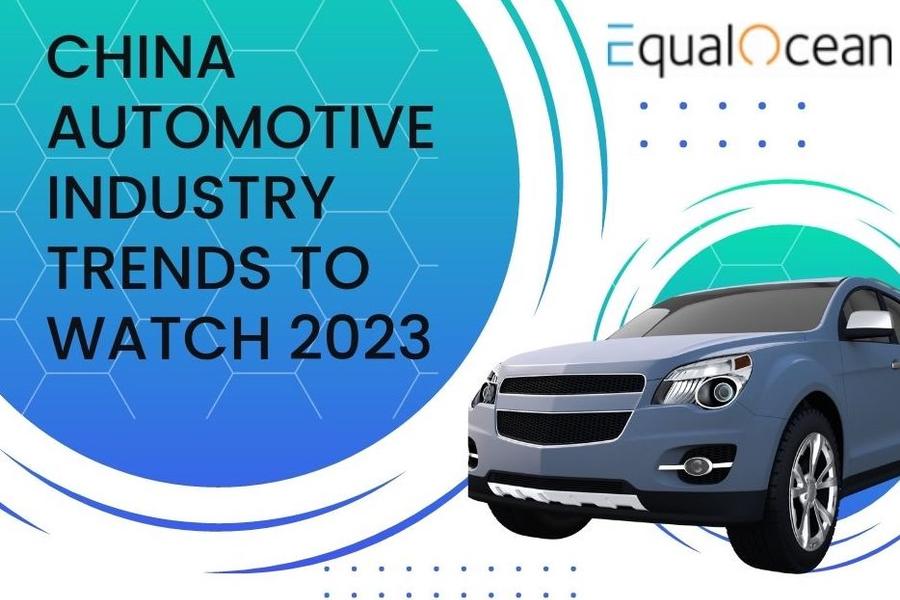 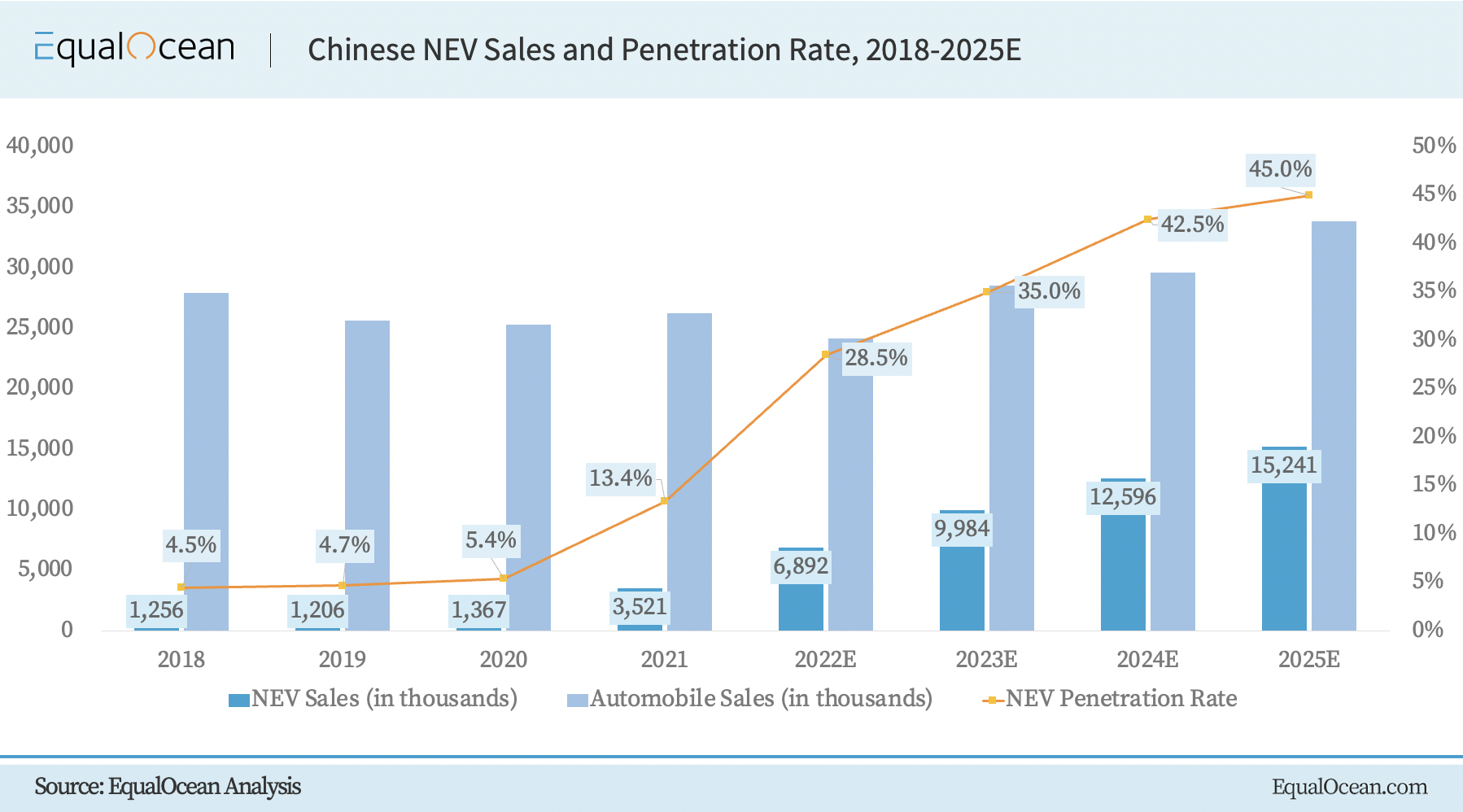 NEV sales and its respective penetration rate have been growing since 2018. Entering 2020, penetration rate of NEV has significantly increased to 28.5% by EqualOcean’s estimate of the overall year of 2022. With a continuous development of electrified, autonomous, shared, connected trend in the automobile industry, we believe that in 2023, NEV sales will continue to rise, and its penetration rate will consequently increase. From the policy side, though the government has proposed to stop NEV subsidies, it is very likely that OEMs will spare an expenditure in subsidy of their vehicle products to bolster the needs of NEVs in 2023 Q1.

Haipeng Wang, managing director of Hengxu Capital, claimed that the automotive industry is in a period of industrial upgrading and change. On the one hand, with the rapid development of new energy vehicles, the penetration rate of the whole new energy vehicles reached about 30% in 2022. Traditional OEMs have also started to vigorously expand their investment in smart vehicles. Opportunities include R&D, manufacturing and investment along the industry chain.

Also, from the perspective of market share based on product price range, we believe future growth of EVs mainly comes from the market where unit price is above 200,000 RMB. Moreover, we will see domestic automakers’ effort in new energy vehicle products to achieve brand improvement.

Similar to consumer electronics, the automobile industry in the long run will achieve hardware standardization and software platform, leaving a lot of room for development for consumer side and incorporating application areas such as autonomous driving and OTA. Yet the era of software platforms has not yet arrived, and the revenue models for companies will be very much like consumer electronics with substantial subscription and service revenues. The core challenge is whether software can realize the value and form a reasonable business model. Current in-car software charge less, lowering single vehicle value, but the outlook for automotive software is positive.

According to Hao Ding, Vice President of Boyuan Cap, the market for autonomous driving is developing, and in-vehicle safety and non-safety domains will have a very large number of intersections and cross-domain integration scenarios, requiring a more complete underlying E/E architecture to match with the needs. Therefore, basic automotive software will be a promising industry with room for development.

LiDARs in 2023 will continue to maintain a high boom for mass production and commerlization.

The Chinese ecosystem includes LiDAR users as well as components, design, and software. The Chinese auto industry is developing new electric passenger vehicles with advanced autonomous driving technologies, such as LiDAR. Logistics, smart infrastructure, robotaxis, and delivery robots are also being developed vigorously in China, resulting in a large and broad demand for LiDAR. At the same time, Chinese enterprises are expanding their growth in topographic applications. For now, Chinese LiDAR suppliers have represented 50% of the global ADAS market. With a close partnership established between LiDAR manufacturers and automakers, Chinese smart electric vehicle market is rapidly developing. 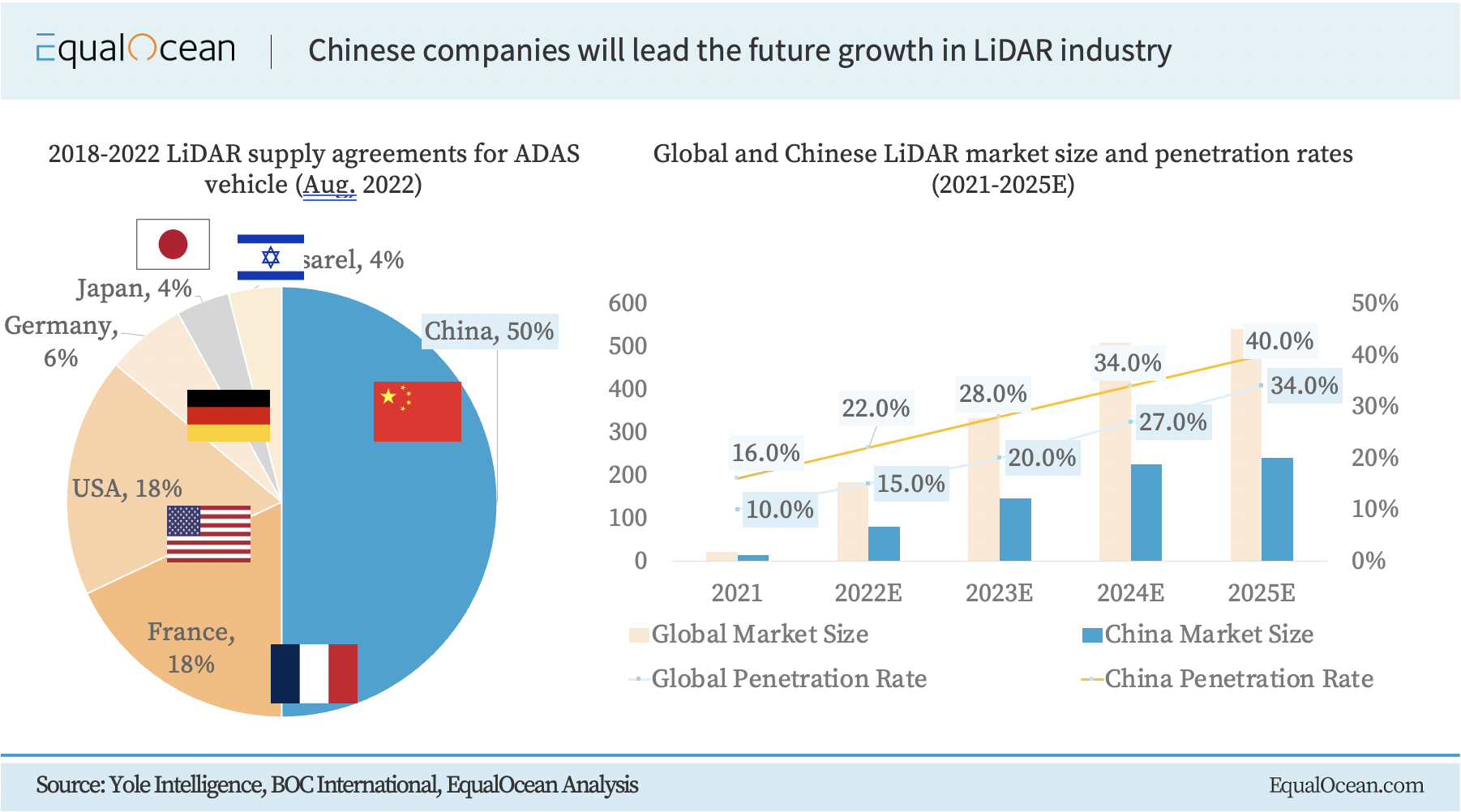 Xiaobo Hu, Founder and CEO of Leishen Intelligence System (LSLiDAR), mentioned that one important tech pathway for LiDAR companies is to grasp the opportunity of V2X (Vehicle-to-X) applications happening in the domestic market. Both vehicles and roads need to reach a high level of intelligence to achieve the L4 level of autonomous driving and it is difficult to solve unexpected problems by deploying LiDAR only on cars.

Industry centralization ratio continues to stay high for OEMs and upstream suppliers in 2023.

EqualOcean believes, with the decline and cancellation of national subsidies, the car companies which lack product competitiveness will face greater pressure and even be eliminated, while the companies with leading technology, strong product competitiveness, and clear positioning are expected to enjoy long-term industry high-growth dividend. The Matthew effect tends to be significant. According to the data of CPCA, there are more than 100 new energy vehicle companies with sales in China in 2021, and the top 20% of brands have a combined sales of 2.58 million units, accounting for 84% of the overall new energy vehicle sales, showing a high degree of market concentration. From the past statistics, we see that the industry remains concentrated measured by sales, and EqualOcean believes that automotive industry will still be centralized in 2023.

China has now become the world‘s second largest automobile exporter, and the export of NEVs occupies an important position. In addition, Chinese cars are also entering mature markets in Europe and the United States. Analyzed from the countries and regions of export, the top ten exporters of China's cars in 2022 include not only developing countries such as India and Thailand, but also developed countries such as Australia, the UK and Thailand.

In addition to a significant increase in the quantity of exports, the quality of China's auto exports has also improved significantly. According to Statista, global auto sales will reach 71 million units in 2023, and the global penetration rate of NEV is expected to reach 20%, with global NEV sales reaching 14.2 million units. From the analysis of export countries and regions, EqualOcean believes, high-income countries and regions such as Europe and America will become good choices for Chinese car companies to export. Europe is currently in a supply bottleneck, and the European market is expected to usher in greater demand elasticity.

EqualOcean believes that in 2023, consumers will be paying more attention to the vehicle ADAS (Advanced Driver Assistance System) function, smart cockpit and digitalized interactions when making a purchase. Firstly, the car cabin technology does not involve chassis control for the time being, the technology is relatively less difficult to achieve than intelligent driving; secondly, it is not subject to vehicle regulations, which makes it easier for car companies to implement the technology, and have now taken the lead in the cloud computing stage of the cabin; thirdly, the improvement of the car system and human-machine interaction capability make user driving and car experience significantly improve, and smart vehicles thus surpass smartphones as new carriers of intelligence.

New vehicle application scenarios will break through the vehicle’s role as being a tool to a terminal of consumer entertainment. The connectivity of cloud resources, multimedia audio and video systems in the cockpit will greatly enrich the in-vehicle movie-watching and game experience, coupled with the progress of display technology of the central control screen, HUD and other devices, as well as the addition of traditional camping configurations such as refrigerators and power supplies in the car, in-vehicle smart cockpit will possess new passenger entertainment scenes.

Chip arithmetic computing power has always been an important indicator for chip companies to compete, but with the continuous improvement of arithmetic power, the chip also puts forward more stringent requirements for back-end process design, power consumption, energy efficiency management, etc. Therefore, the future competition of self-driving chips will be based on arithmetic power, process and performance. 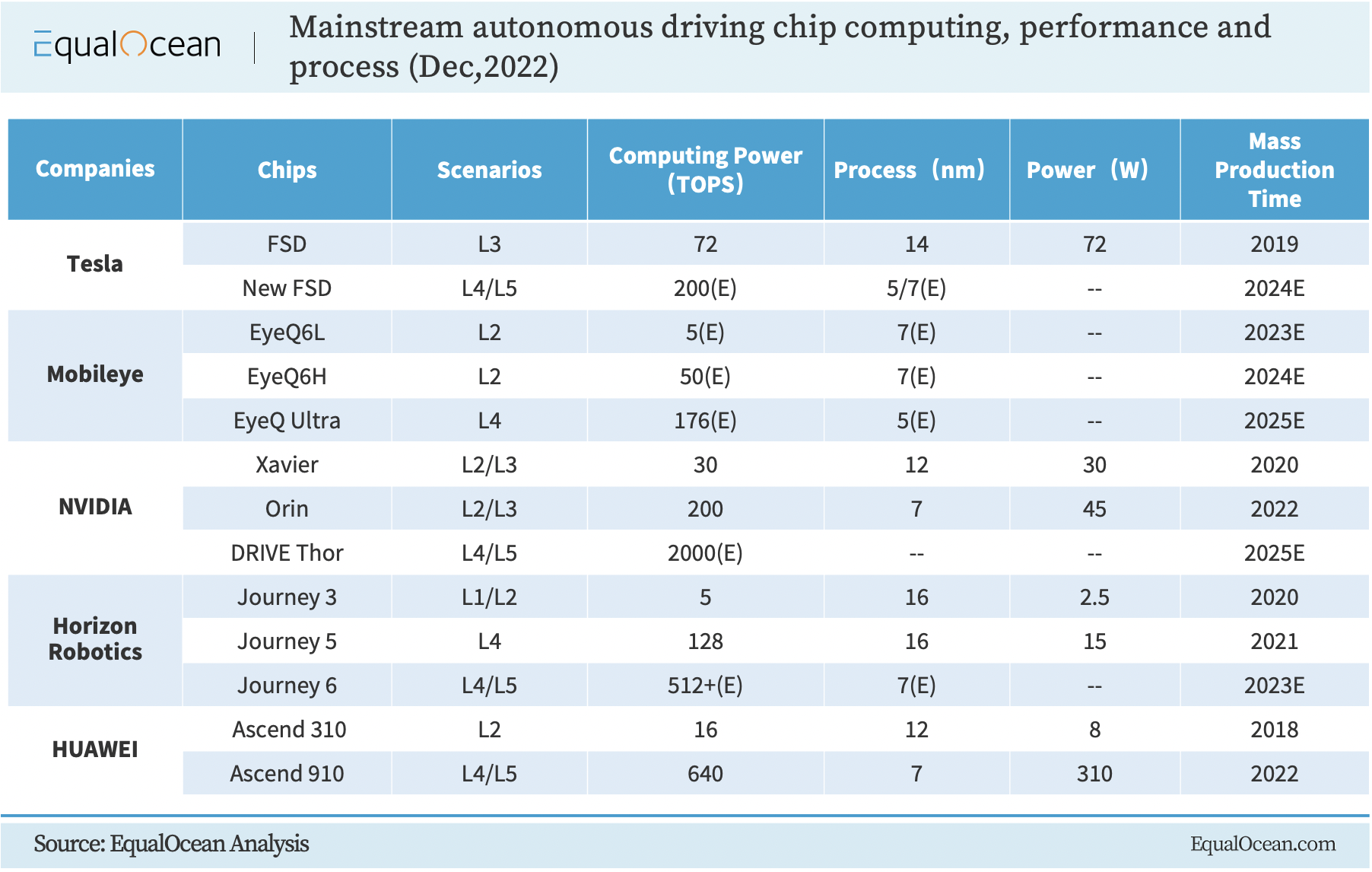 In the power battery field, an increase of raw material prices and overcapacity are evident in 2023.

In recent years, due to the rapid expansion of the lithium-ion battery industry, lithium resources have been in short supply and prices have risen rapidly. Although lithium resources are not so scarce in terms of resources, and the price will gradually drop in the future, we expect the price of raw materials to remain at high levels in 2023. Therefore, the development of new materials and new systems with abundant resources and low prices has become a hot spot.

EqualOcean believes that the long-term development of lithium batteries will be restricted by the shortage of lithium resources, sodium-ion batteries have become an important alternative route and will form a complementary pattern with lithium batteries after commercialization. Sodium-ion batteries have significant advantages in resource richness and cost, but due to the limitation of energy density of the chemical system, it is expected to take the lead in achieving large-scale commercial applications in scenarios such as energy storage and low-speed vehicles in the future. 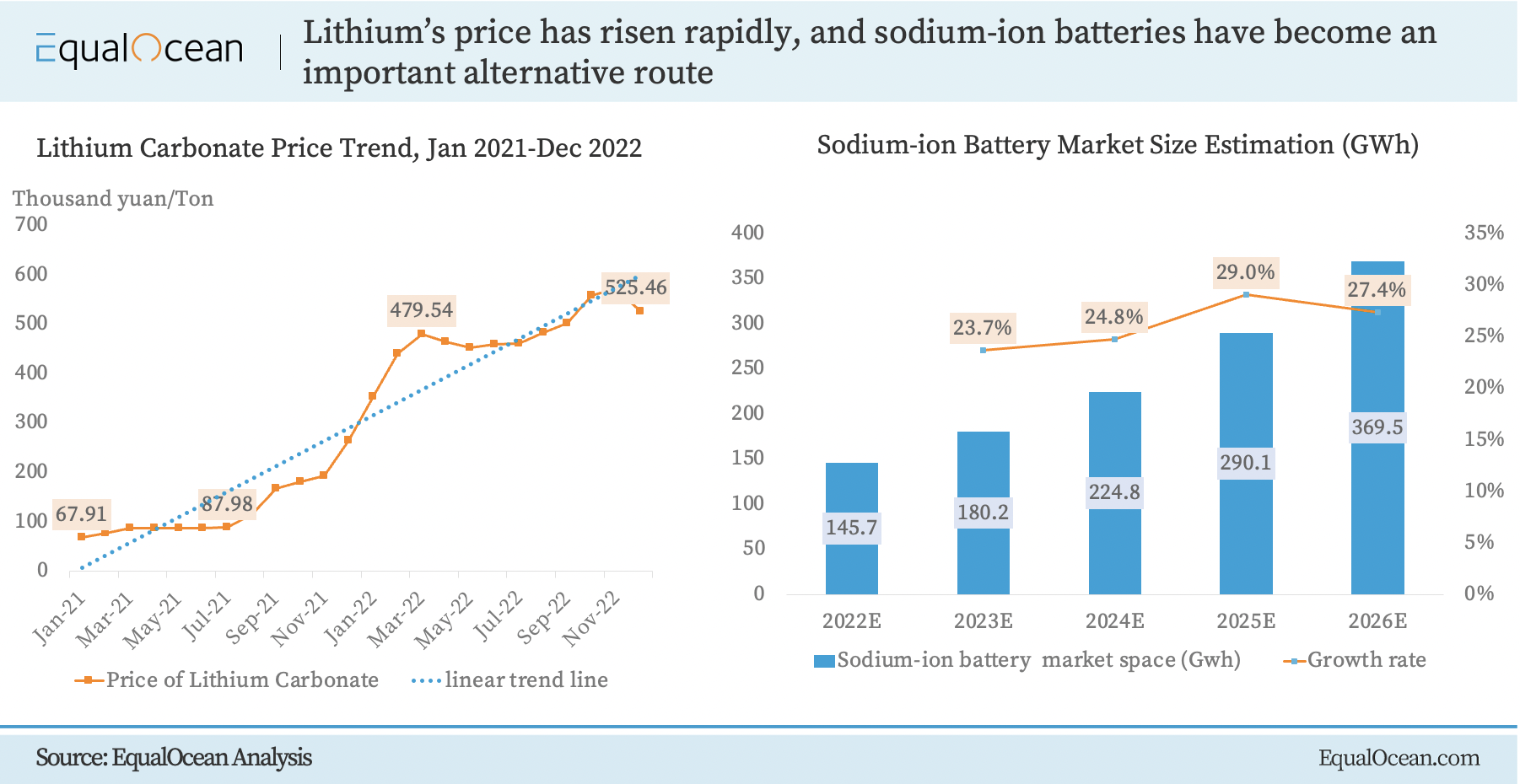 EqualOcean expects that the high boom of the power battery industry will continue until 2023, but the growth rate of domestic new energy vehicle sales will decline in 2023, and the widening gap between power battery production and vehicle loading may indicate the risk of overcapacity. In 2023, the growth rate of NEVs in China's domestic market is likely to decline, coupled with the release of new production capacity of power batteries, there will be excess battery supply. Although the current domestic power battery production and installation ratio has dropped significantly, it is still within a reasonable range. At present, export and energy storage demand is strong, and there is no overcapacity situation yet, but the trend of overcapacity has already appeared. In the future, overseas export may become the solution for battery manufacturers to release capacity.

EqualOcean believes that the mid- to high-end market will continue to be a major source of growth for the new energy vehicle market, while intelligence is also a very important part of new energy vehicles. The better quality of cars, the stronger brand effect, and the upgrading trend of customer consumption is relatively clear.