How Can Fresh Hema Prevent its Economic Slowdown?

In an interview with Lingwu Media, CHEN Yaochang, CEO of Wal-Mart China, believes Fresh Hema's future may depend upon market feedback.

CHEN Yaochang (陈耀昌), CEO of Wal-Mart China, believes market feedback may drive Fresh Hema's economic growth in the future according to his interview with Lingwu Media (灵兽传媒). In 2019, Hema’s CEO, Houyi (侯毅), announced a strategic transfer to focus on community-based new grocery stores, a strategy likely to combat this problem.

CHEN is an investment partner of Gaochun Capital (高淳区) and has invested in Mei Cai (美菜). The B2B fresh grocery business received 8 funding rounds and a total amount of USD 792.6 million.

In 2019, Hema’s CEO, Houyi (侯毅), announced a strategic transfer to focus on community-based new grocery stores, a strategy likely to combat this problem.

According to CHEN, a business model must be fully operational, especially before rapid expansion to eliminate development problems. At the end of 2018, Fresh Hema had four food safety concerns, exposing its operational management problems during its expansion period. These problems raise concerns among investors and the market regarding the company’s potentially flimsy business model and its performance turnover.

In the past, Fresh Hema publicly revealed its plans to open approximately 500 stores, a number the company consider as the “safe boundary.” Regarding this, CHEN believes that whether Fresh Hema reaches its goal or not, it’s bound to slow down.

“If Fresh Hema wants to expand to 500 stores, there are two possibilities. First, it will, but losses are expected to increase simultaneously. Second, before it even opens 500 stores, it has already entered a gradual slowdown,” CHEN said to Lingwu Media.

In 2018, Fresh Hema signed 13 contracts with real estate developers such as Evergrande (与恒大) and Country Garden (碧桂园) and opened 100 stores. In Mar 2019, the new retail supermarket has over 130 stores across China.

Fresh Hema’s store layout varies depending on the city it operates in to which CHEN correlates to market changes. Market changes also vary due to consumption scenarios. According to iYiou, Currently, Fresh Hema has four major retail formats. Fresh Hema stores are 300 to 500 meters with roughly 2000 SKUs. 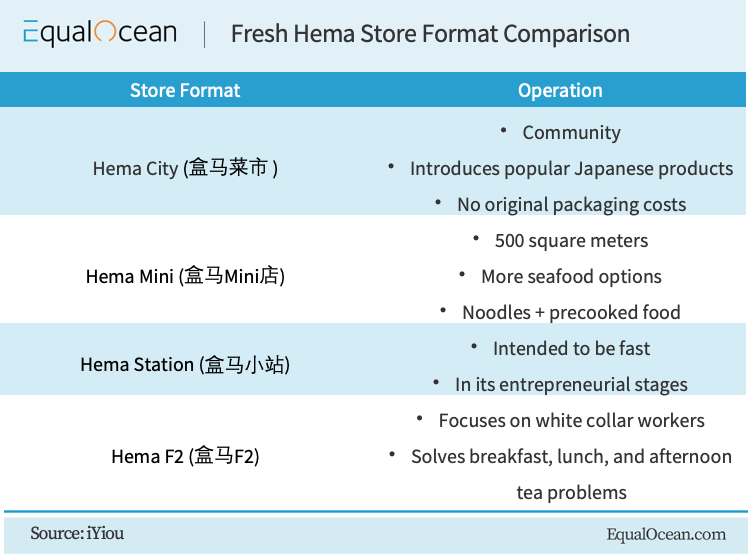 CHEN argues the lack of investment in the upward supply chain is what is hurting the development of new convenience stores.

Fresh Hema’s upward supply chain consists of a central and store warehouse and uses technology to help track and organize its inventory. Its storage also consists of two warehouses (primary and in-store) which use electronic price tags to track inventory changes in real-time.

As the majority of Fresh Hema’s customers use its mobile app and Alipay to place orders, the company can track and record its daily product demand. Additionally, orders are delivered depending on the product and location of both the consumer and delivery personnel to optimize efficiency. According to iYiou, 60% of Fresh Hema’s total sales is via e-commerce, ten times higher than the industry average.

While Fresh Hema has already adjusted their stores to fit consumer preferences, it may have to adapt their business model according to the city they operate in to not only improve efficiency but also for positive market feedback.