Wei Li, Chairman of GPCP: New Technology Investment Trends Over the Next Decade

One of WIM2020 first day’s speakers was Wei Li, who spoke as chairman and founder of Green Pine Capital Partners, about technology investment trends over the next decade. 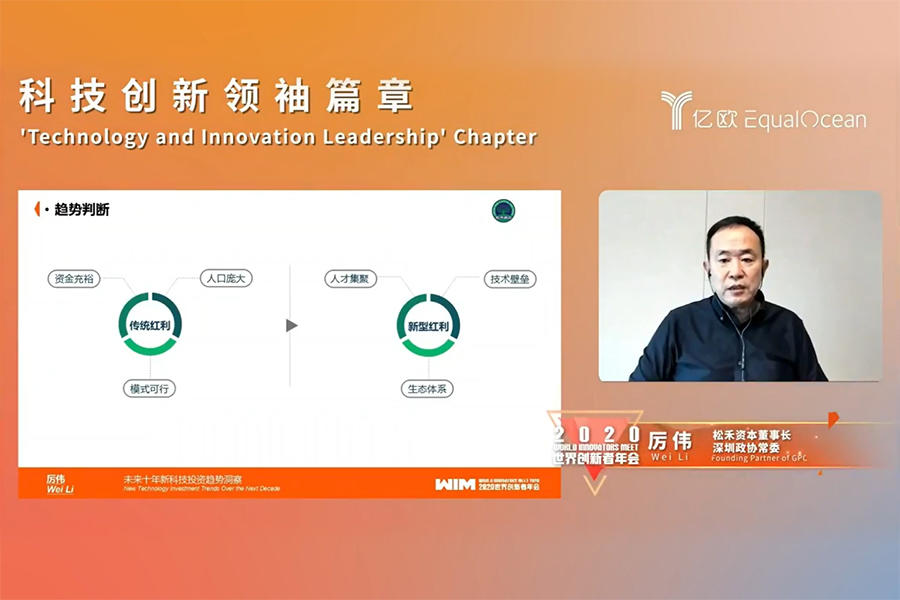 "Having been through the factor-driven stage and the investment-driven stage, China is on its way to an innovation-driven stage, which depends on concentrated talents, irreplaceable technology and healthy ecosystem," claimed Wei Li, who is also standing Committee of Shenzhen CPPCC and lead speaker for the Leadership Chapter.

During the World Innovators Meet, on 9-12th of December, innovators from all over the world met up online to discuss key achievements in 2020, marking out how breakthroughs are adding convenience to everyday life.  Wei Li, as one of the most influential investors, focused on new technology investment trends, which included production localization alternatives, new infrastructure and health care.

This company, called Richful, was established in 1996. First, it developed a test agent for carbon-free paper. Today, Richful has become the world's largest producer of carbonless paper detection agents. In 2004, Richful successfully researched and developed lubricating oil additives independently. By 2009, a series of products related to lubricating oil had been developed rapidly, which filled some gaps in the field of additives in China.

This example shows that technology and innovation can make China stronger than people could in the past, because the whole production process should be oriented by production factors, which determine the development trend of the country as a whole. After that, it enters an investment-oriented stage, and in the future, it will enter an innovation-oriented stage, when will people have their orientation towards wealth.

However, for different stages of the country we may see different orientations. Innovation has become the core driving force for continuous development, helping countries to avoid the middle-income trap and move to an innovation-oriented stage.

Nowadays, there are many high technical barriers for enough development and new growth of the good ecosystem, so there is a particular need to gather talents from all other the world. So Wei Li noted that the trend has changed from relying on resources in the past to relying on talents and ecology. This trend has been the focus of technology and innovation investment for many years. Technology and innovation will become the most important field for development in the future. The new pandemic of 2020 first broke out in China and then spread around the world. In this case, all countries were affected, and they had to adopt new different ways to take the situation under control. However, the pandemic has led to other breakthroughs in the healthcare field. For example, BGI has established the 'Fire's Eye' detection laboratory, developed in China's Wuhan to go around the world to support resistance to COVID-19, and Ginger Bio enterprises, which produce IBD and also developed many new virus detection boxes – at the early stage of the pandemic, detection played a major role. Investments in the AI and robotics solutions that the government sought provided people with contactless ways of delivery, reducing the risk of infection and other tools that we used during the pandemic.

In terms of China's technological and innovative development in the future, we often hear the phrase 'domestic batch manufacturing.' Developed countries, led by the USA, feel that China's development speed is too fast. Particularly, the USA has started a trade war with China that has gradually transitioned into technology and innovation war. However, China is eager to embrace globalization and continues to play an important role in the global value chain system.

Wei Li noted that China has several basic aspects of domestic substitution that can cover the losses arising from the government's restrictions. There are therefore some investment opportunities: 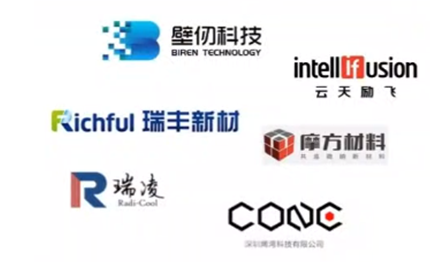 Infrastructure investment will not only increase employment opportunities and stimulate GDP growth, but also provide a very good environment for promoting incubators, a new economy and a new industry.  China is starting a new stage of infrastructure, represented by information technology, which provides a huge opportunity for China's GDP growth and investments.

In the slide below you can see the technology and innovation enterprises that have been investing by the government. Sensetime is a leading AI platform in the world and plays a significant role in China's new infrastructure. The fourth paradigm is an AI company invested in by China's five major state-owned banks. It provides some core technologies for the financial system of these banks. For instance, RealAi technology strives to explore the next generation of saver AI technology. Ponyai is the world's leading platform technology for intelligent driving. It has cooperated with many international car manufacturers. BM technology is trying to do something about GPU so that GPU production will not stop in China.

3. Healthcare and pension as the representatives of consumption demand

Consumption demand is also a very important aspect in the future because with the change of population structure and improving the level of education, health care and pension are also a very important part of good-quality life. For example, the government has invested in some medical technology enterprises, which will play a significant role in the future life of residents.

Investors also should pay attention to an enterprise's performance. If you find a good project, you should invest in this enterprise based on your professional point of view.

When it comes to a specific enterprise, investors will focus on the enterprise from three angles, and one may use three different graphics to express it:

Innovation must have both a 'diamond and a horn'; the team is round, and the circle is characterized by the shortest circumference of the same area, and a good team involves gathering a group of people with minimum cost; the leader is horizontal and vertical, and the leader must have principles and, the bottom line, he should be tolerant, because the bigger the team, the more capable will be the people who join it, and capable people will have personality.

Finishing his speech, Wei Li shared four sentences that everyone who starts a business should keep in mind: "Some people can see only because they believe, some people can believe only when they see. The forerunners are destined to be lonely. We must believe in the power of faith."