Yuanpu Huang, CEO of EqualOcean: Innovation Is the Cradle of Sustainable Success

One of WIM2020's first speakers was Yuanpu Huang, who spoke as Chief Executive Officer and Founder of EqualOcean about the important role of technology and innovation in the modern world. 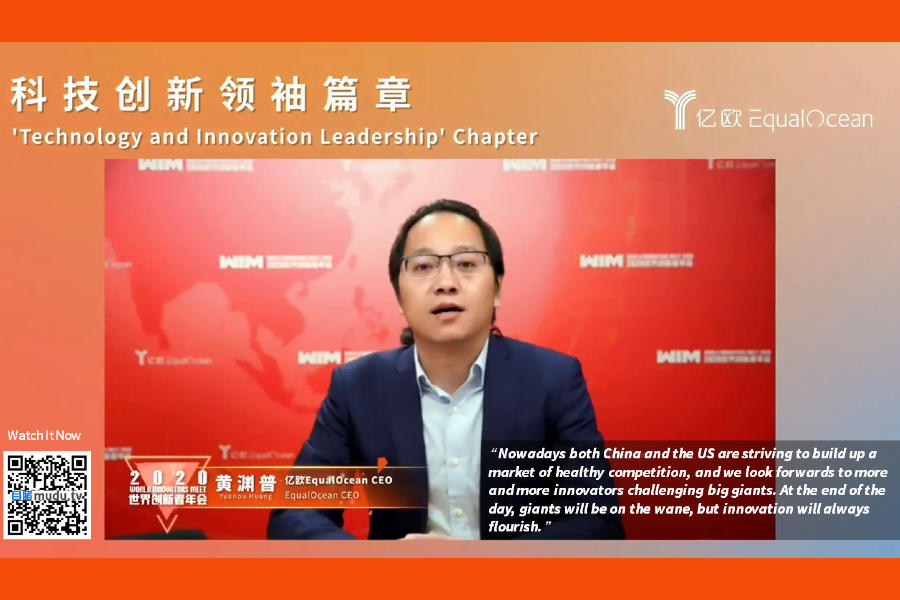 "Nowadays, both China and the USA are striving to build up a market of healthy competition, and we look forward to more and more innovators challenging big giants. At the end of the day, the giants will go on the wane, but innovation will always flourish," so claimed Yuanpu Huang, CEO of EqualOcean and lead speaker for the Leadership Chapter.

During the World Innovators Meet on the 9-12th of December, innovators from all over the world met up online to discuss the key achievements of 2020, marking out how breakthroughs are adding convenience to everyday life. Yuanpu Huang joined WIM2020 with an inspiring speech about the important role of innovation in the modern world.

At the beginning of the speech, Yuanpu Huang reflected on the 23rd of January 2020, when Wuhan was declared closed because of the epidemic situation – at that time EqualOcean was setting out to establish itself in New York. Yuanpu Huang remembered how he had heard about the death of Clayton Christensen, a famous professor at Harvard Business School. One of Christensen's most famous works is The Innovators' Dilemma, published in 1997. The professor analyzes here the reasons so many big companies fail when they are faced with disruptive technology and innovation. In the recent era, when disruptive innovation comes, many successful enterprises will decline, because it was hard for them to seize innovation opportunities.

Nowadays, these Internet technology giants have huge revenues and profits. Even if there is not enough innovative capacity, the companies rely on financial resources for mergers and acquisitions of small and medium-sized innovative enterprises. It's hard to say whether Internet tech giants are leading innovation or stifling it.

But some motivation stories in the last decade have given innovators some hopes. During China's evolution from PC Internet to mobile Internet, Meituan, Xiaomi, ByteDance, Pinduoduo took advantage of this process, and have now surpassed the former tech giant Baidu in terms of market value. In the USA, Tesla, a new energy vehicle company, has finally become the automobile brand with the highest market value in 2020. Because of the pandemic and worldwide lockdown, Zoom will be transformed into a giant with a market value of 100 billion US dollars in 2020.

It's very hard for innovators to break through the giants' tight encirclement. Tech giants not only have economic strength but also have strong political resources. However, public and enterprises' interests are inconsistent, so we need a good mechanism to correct the disparities.

There are differences in many aspects between China and the United States, but there are some points of consensus on how government should monopolize the Internet technology. In the recent general election in the USA, some candidates openly called out slogans that asked for the overthrow of the Internet tech giants. On the Chinese side, in November, the government began to solicit opinions on improving 'platform economy anti-monopoly guidance.'

China and the USA are superpowers. One of the characteristics of a superpower is that the biggest menace may come not from outside, but from inside. China and the USA provide a better innovation environment and growth opportunities for small and medium-sized enterprises; both nations have thus become economic leaders. Even now, both China and the USA provide many layers of opportunities, both to the middle and lower classes, for development – as for who will be the 'real winner,' that is far from certain. Yuanpu Huang hopes that, even if competition between China and the United States is inevitable, it should be benign tech competition, based on encouraging innovation rather than hindering innovation.

"We just hope that the number of small and medium-sized enterprise innovators will still have the ambition and courage needed to challenge the giants. During the process of mobile Internet evolving to the Intelligent Internet of things, there will be more enterprises with a market value of more than ten billion USD. Besides, we believe that there are many worthy unicorns in the innovation lists released by WIM2020."

In summary, it was with a realistic view of competition and change, and an optimistic vision of development and innovation, that Yuanpu Huang inspired his audience during the opening speech of WIM2020.