Alipay handles more B2C or consumption-related payment activities, while Tenpay has a larger share of C2C transfers. The overseas expansion competition between the two is fierce in Southeast Asia and beyond. 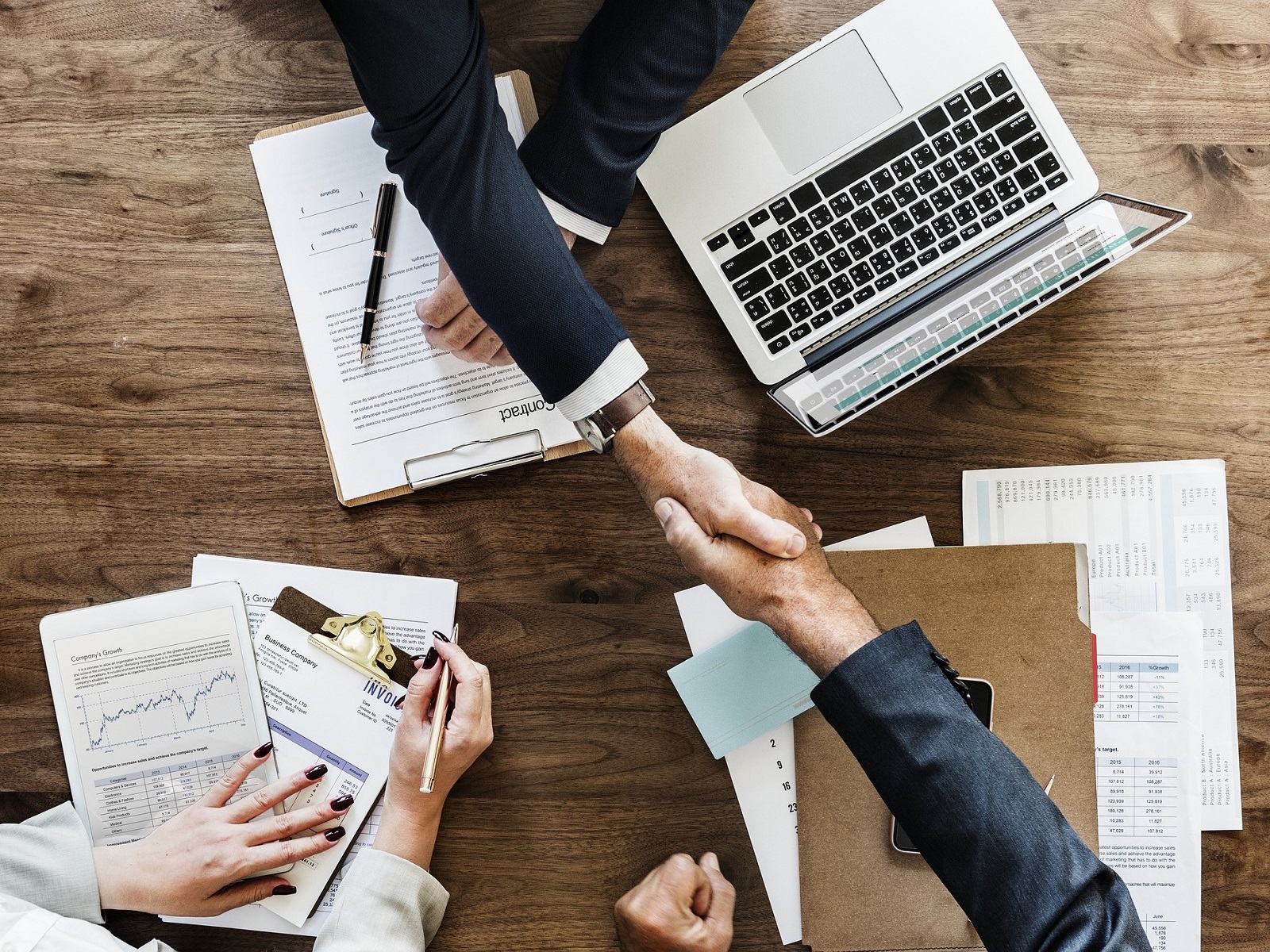 Regulatory changes and technologies are reshaping China’s financial activities. The speed of financial evolution in China is vastly ahead of other countries, leapfrogging from the credit card system to mobile payment. After we go through the payment history of China in PART II of this series report, we can have a comprehensive understanding of the background when groups of hybrid fintech companies rising after Ant Financial, for example, Tencent, JD, and Ping An. They have emerged at the heart of China’s financial industry, making financial services more convenient and accessible for consumers.

Launched in 2004, Alipay is the pioneer in acting as the escrow service provider in online transactions. It allows consumers to verify the receipt and quality of goods before releasing the money to sellers, which solved the lack of trust for e-commerce in the early stage. 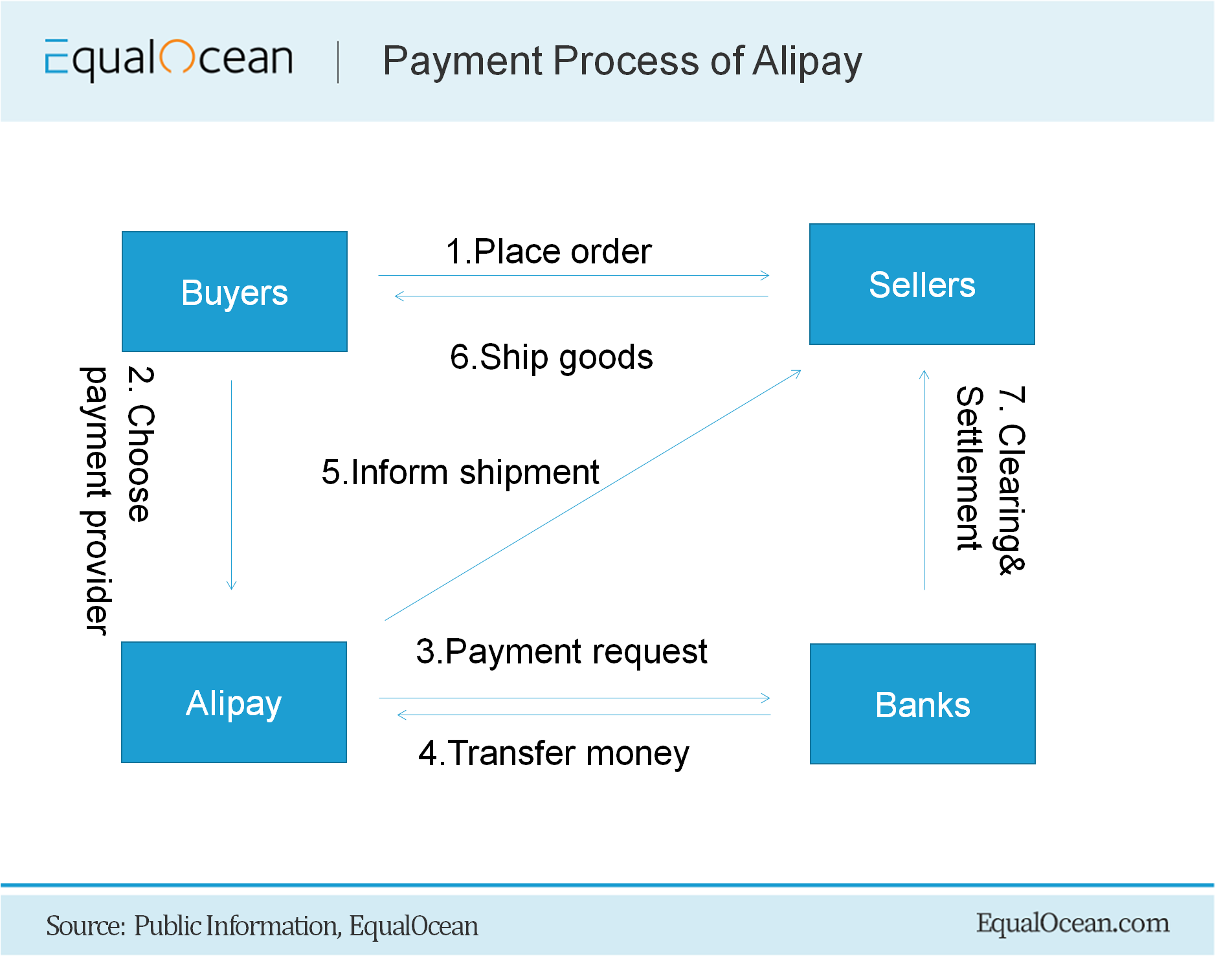 However, its market share has been declining since 2014, especially in mobile payment, as Tenpay (财付通) entered the race.

Tenpay (WeChat Pay and QQ Wallet) is currently the second largest player with a 38% market share in 2018. Its market share has doubled since 2014.

The rest of the market is scattered. Among the other players, the relatively sizeable ones are Ping An e-wallet, JD Pay, Yifubao. There are also payment companies that specialize in only one platform or product. For example, Lakala mainly focuses on providing mobile payment solution to physical retailers. Players like China UMS, 99Bill and ChinaPnR have sizeable market share in desktop payment, but little exposure to mobile payment. Banks have also been trying to play catch-up, providing much more streamlined mobile payment service through its mobile application, such as QR code scans and innovative functions such as payment through mobile phone number.

Alipay, obviously relying on the huge advantage of Taobao e-commerce, shopping on Taobao, Tmall, payment methods should only Alipay and UnionPay, WeChat is blocked. Then in terms of occupying huge online shopping, as well as online business payments. Alipay has a greater advantage.

We can conclude from the merchant type that Alipay handles more B2C or consumption-related payment activities, while Tenpay has a larger share of C2C transfers.

Pricing Strategy
The reason for the explosive growth of mobile payment in a short period of time is absolutely inseparable from the burning-money model of Alipay and Tenpay.

In order to expand their influence and expand the market to attract users, a variety of patching styles have been applied, including the most common red packet, this popular promotion activity started by Tenpay can increase the viscosity between the user and the platform. Individual merchants can transfer their money in Alipay to the linked bank card for free, while individual consumers will be charged 0.1% after reaching a lifetime quota of RMB 20,000. For Tenpay,  individuals are subject to 0.1% charges, each individual is entitled to RMB 1,000 cumulative free transfer amount.

In addition to individual users, merchants also benefit greatly from the attracting-users competition due to important part merchants play in the development of offline mobile payment market.

Alipay offers various payment services for merchants, including desktop payment, mobile o payment, and offline QR code payment designed for offline small merchants. The pricing of these services is set from 0 to 1.2% of the transaction value. Alipay is currently promoting QR code payments to small offline merchants and this service is offered for free when consumers pay by scanning the merchant’s QR code. For SME merchants, they are entitled to a cheaper rate of 0.55%.

After Feb. 1, 2019, Alipay and Tenpay agreed upon a flat rate of 0.6% for most of the industries, put the money-burning race to an end, and seek a more healthy way of long term development.

Alipay, together with other products showed below, provides comprehensive financial services for consumers. From Alipay's payment as an entry point, its financial sector is completed by wealth management, credit scoring system, internet banking, small loan, and insurances, etc., creating a one-stop or closed loop for users. 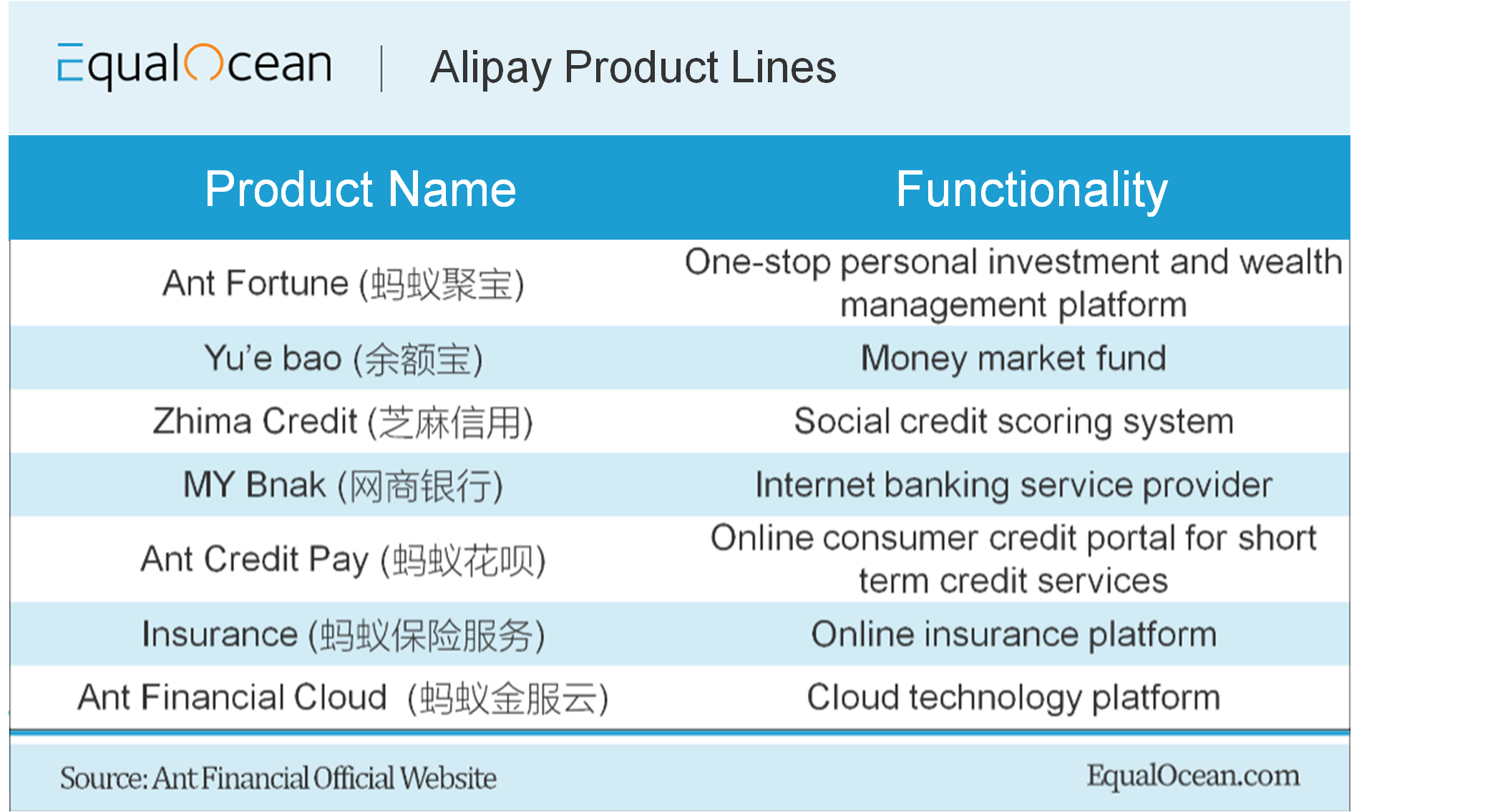 Alipay’s role as the payment infrastructure of Alibaba and Ant Financial’s ecosystem differentiates itself as being more commercially relevant compared to Tenpay. According to Alibaba, 70% of Alipay’s transactions are commercial transactions

Other than payment processing for merchants, Tenpay’s main product offerings are through WeChat and QQ, the social networking apps that used by more than 80% of the whole population in China. Peer transfer and red packet: this feature leverages and reinforces WeChat’s social feature, allowing users to transfer money to WeChat friends (can be in red packet format), to send a probability-based red packet to group chats, and to request for payment in a group chat. QQ Wallet also innovates “Password Red Packet”, giving red packet only to those who repeat a certain “password”, making money transfer more social and engaging.

Tenpay’s key advantage lies in the ubiquity of Tencent’s social and communication assets, WeChat and QQ (with 938mn and 861mn MAUs respectively as of 1Q17), through which Tenpay’s services are offered. This significantly lowered the customer acquisition cost (CAC) for WeChat Pay and QQ Wallet and underpinned their strong performance in mobile and offline payment scenarios.

From the above arguments, we can see the fierce battle between Alipay and Tenpay has never stopped. As the coverage of the consumption scenario approaches saturation, these two giants have further infiltrated into the scenario on one hand, and have begun the overseas expansion to find new growth possibility on the other hand. Although the pattern seems to be the same, they actually differ on focused strategies.

Alipay has established cooperation with more than 250 financial institutions around the world to provide online payment services for overseas merchants and users. On the other hand, it provides overseas consumers with offline payment services in 54 countries and regions around the world to help Chinese people realize “One mobile phone travels all over the world”. More importantly, it develops 9 other “local version of Alipay” to serve local users in 9 countries and regions.

Tenpay is slightly behind Alipay in both overseas merchant cooperation and global investment. However, Tenpay is infiltrating into every corner of the world. The number of countries and regions that can use Tenpay (WeChat mainly) has increased to 49, and the number of billable currencies has increased from 12 to 16.

The contest between the two in the international market is not only in the Southeast Asian market but also in the economically developed regions. Alipay acquired cross-border payment company WorldFirst in Feb. 2019 while Tenpay started the cooperation with Line in Japan aiming at the tourist from China in their retail-related consumption.

After the comparison of the two giants in the payment industry, we see the importance they put in controlling the consumption scenarios by creating a closed loop of the financial ecosystem and in the overseas expansion. Clearly, the payment as service functions not only as an entry point of fin-life but also an infrastructure weapon to the future world. Alipay who owns the B2B gene from Alibaba, has more first-mover advantage in the trial of globalization.