Surf's Up! Riding the Second Wave of Internet Change in China

When can an enterprise service or B2B marketplace company be considered as a true 'Industry Internet' player? 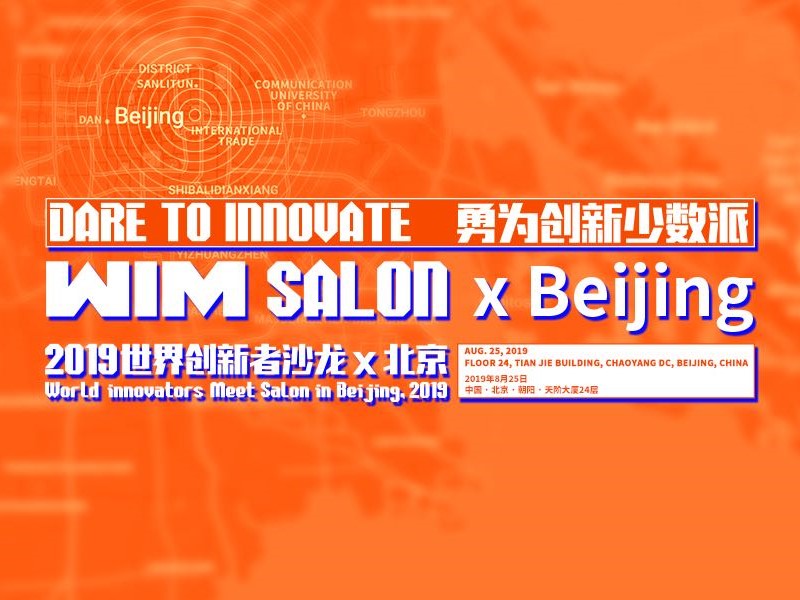 Consumer-focused business retained its cachet over decades in China, but technology startups that cater to businesses are the hottest topic now. Between 2000 and 2017, Chinese GDP reached USD 12.2 trillion, rising from USD 1.2 trillion. Along the way, China witnessed the successes of juggernauts such as Alibaba, Tencent, Baidu, JD.com, Meituan Dianping, Xiaomi, and NetEase; Chinese consumers gained the reputation of adopting new technologies with incredible speed, participating in the reshaping of their own lives with gusto. The country is transforming, in ways driven especially driven by Consumer Internet.

It will continue to do so in the era of the 'Industry Internet'. The term initiated by WeChat-maker Tencent’s founder Pony Ma in 2018, shows the most valuable social network firm’s ambitions to leverage Internet capabilities across Chinese industries.

EqualOcean is going to host a WIM Salon to address concept this Sunday in Beijing, in cooperation with Mydream+, Startup Grind, Chinaccelerator, ZhugeIO.com, Pipiban, and Nordic-China Startup Forum. We've organized the first Salon of this series successfully last month.

Industry Internet refers to how many of the 2B opportunities out there?

Defining Industry Internet, however, has become tricky and more vital as the concept is in danger of becoming too broad if we include all possible to-business innovations.

To achieve a better understanding of the impact of the Industry Internet, EqualOcean conducted interviews with dozens of leading investors, who have devoted 10 years on average across the industry, to learn how they see the topic.

A couple of implications stand out. One is SaaS (Software-as-a-Service), a relatively new business model with a premise that a piece of software is hosted on a cloud infrastructure, and businesses pay a monthly/annual fee to get access to it. Business owners do not have to spend huge sums of CapEx in IT infrastructure while getting access to software that is incredibly integral to their businesses. Ever since Salesforce went public in 2004, almost other 70 purely-play SaaS companies went on to be listed. Cloud-based CRM and ERP software, and other vertically focused business software types, have seen opportunities in transforming industries. In this context discussion of the cloud market is inevitable, because SaaS is built on the cloud infrastructure. The cloud market involves SaaS, IaaS (Infrastructure-as-a-Service), PaaS (Platform-as-a-service), et al.

Another implication is that all the enterprises involved in the merchandise circulation of commodities should possess strong supply chain capabilities. Companies that connect upstream suppliers and downstream buyers, such as e-commerce enterprises and retail stores, can be defined as B2B marketplace players. Supply chain players also make a presence felt here.

They use digital and mobile channels to guide purchase journeys; E-commerce giants are digitizing essential processes along the supply chain, which can be defined as S2C (JD.com, Alibaba); Retail chains that buy excess inventory from manufacturers and stores at bottom price and pass on the savings to customers, speeding up turnover and improving industry efficiency can be defined as S2B2C (Aikucun, a counterpart of TJ Maxx).  These need to invest in technology, data, and analytics to improve insights into supply chain management, warehouses, logistics, and even customer behaviors.

The last one is the digital factory/Industrial Internet. Industrial leaders are introducing innovative, data-based services to digitize essential functions within their internal vertical manufacturing processes. These enterprises will work for that purpose internally, and also with suppliers in industrial digital ecosystems.

This complexity makes it is hard to fully appreciate the whole picture of the Industry Internet. The one thing that emerges with certainty is that the question of what success, originality or forward-thinking truly mean in this context is on the minds of more and more people – be it entrepreneurs, investors or others.

EqualOcean focuses mainly on vertical-specific SaaS and S2B players in the research, as their businesses have significantly influenced industries, having set about cracking the codes of targeted sectors, directly. Still, considering China’s SaaS market is still nascent, we also introduce several horizontal SaaS firms in the investigation, not too many.

In this article, we talk about SaaS opportunities.

Salesforce went public in 2004 and the era of the cloud started. More than 70 other pure-play SaaS companies that example in the public markets. Some were acquired before their listing (i.e. Responsys) or after it (i.e. MINDBODY, Inc.). This year we saw seven star SaaS companies the likes of CrowdStrike Holdings, Slack, Zoom Video Communications, etc. filing for IPOs and proving their successes in the secondary market. 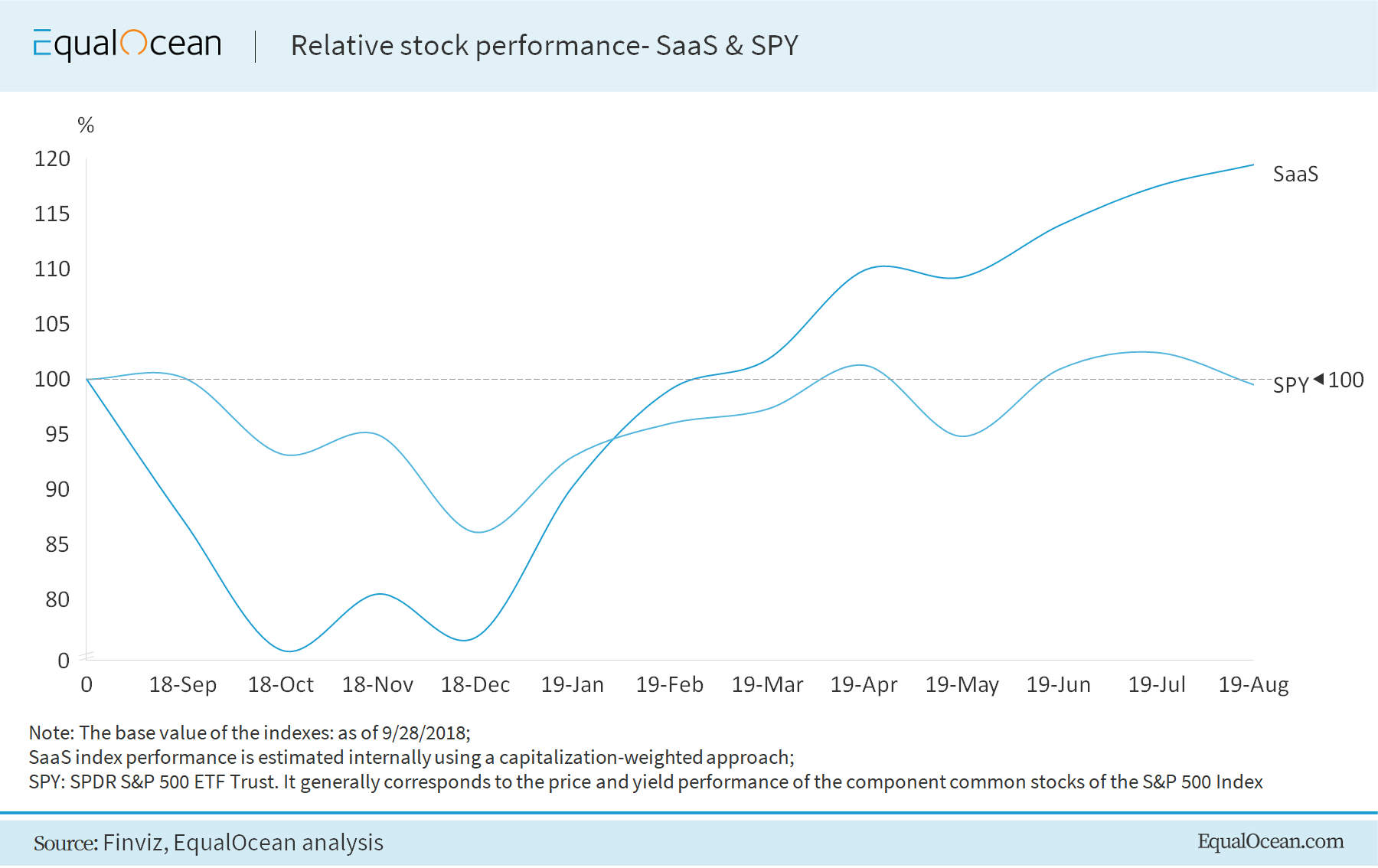 Zoom is now trading at 64.13 times revenues as of 8/28/2019. Given all the recent IPOs and their high trading multiples, it is imperative to look at the performances of public SaaS companies over the past year. The SPY index was hovering around 100% throughout the past year and stopped at 95.08% this month. SaaS stocks, on the other hand, picked up momentum after 2018 ended and grew right through the market volatility. A basket of public SaaS stocks trades at a median multiple of 10.86 revenues. Salesforce (CRM:NYSE) has grown to be a USD 129.97 billion market cap company in 15 years and we will continue to see more small players follow, with support from primary and secondary markets.

EqualOcean looked into 66 publicly-traded SaaS companies and tracked the trading history from IPO to the present date. The returns for them are impressive: on average this group of companies has been trading for 4.56 years and the average return is 4.59x. Those companies have created a market cap of USD 610 billion. 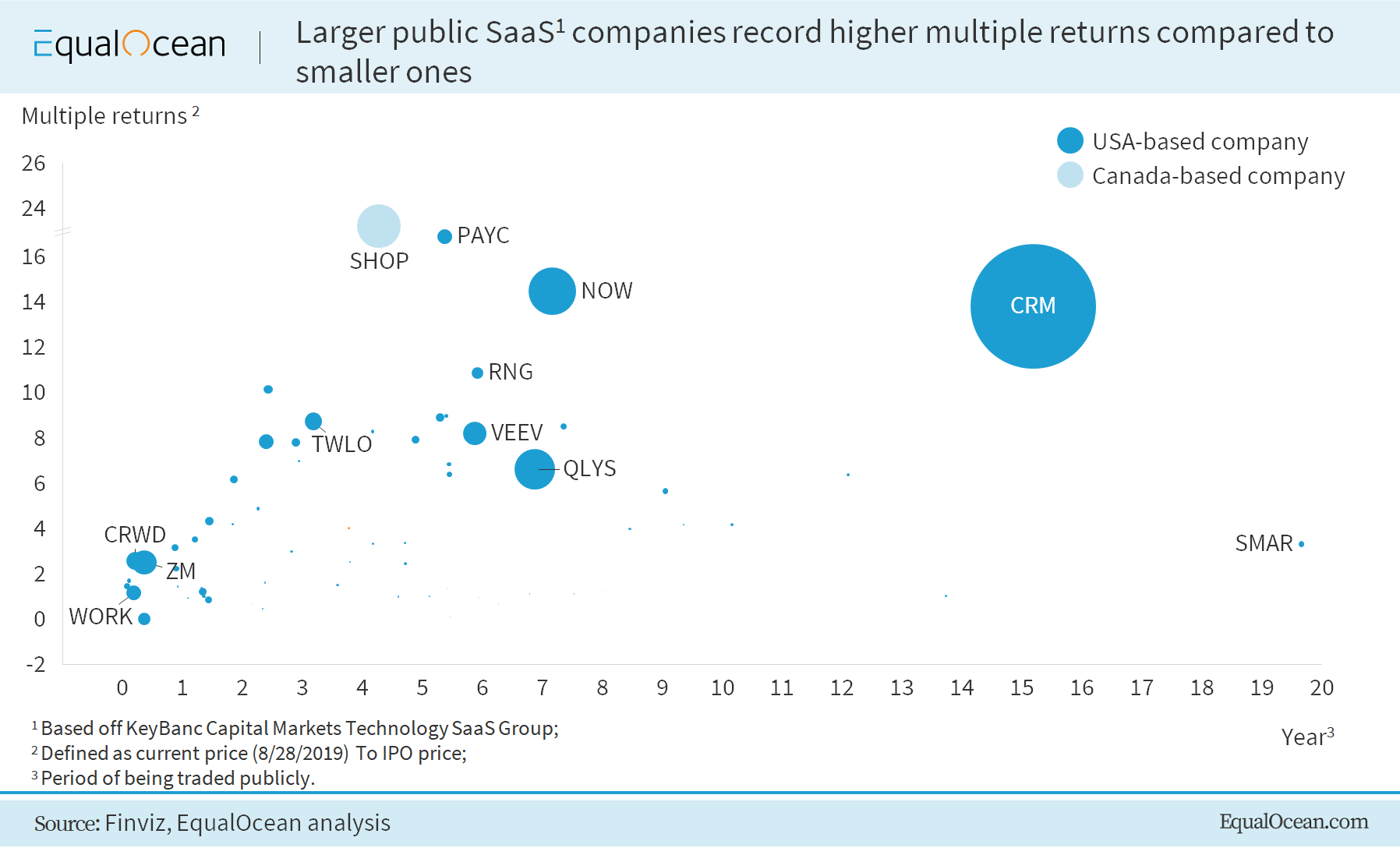 Most of the companies in the group are concentrating in the bottom left part of the chart. We see another common trend: larger public SaaS companies record higher multiple returns compared to smaller ones.

After digging into the individual performance of companies to find those that had share price returns of 12x+, we found four companies - Shopify (SHOP), Paycom (PAYC), ServiceNow (NOW), and Salesforce (CRM). Shopify, the youngest public company among the four, has the greatest share price return from IPO price 23x. 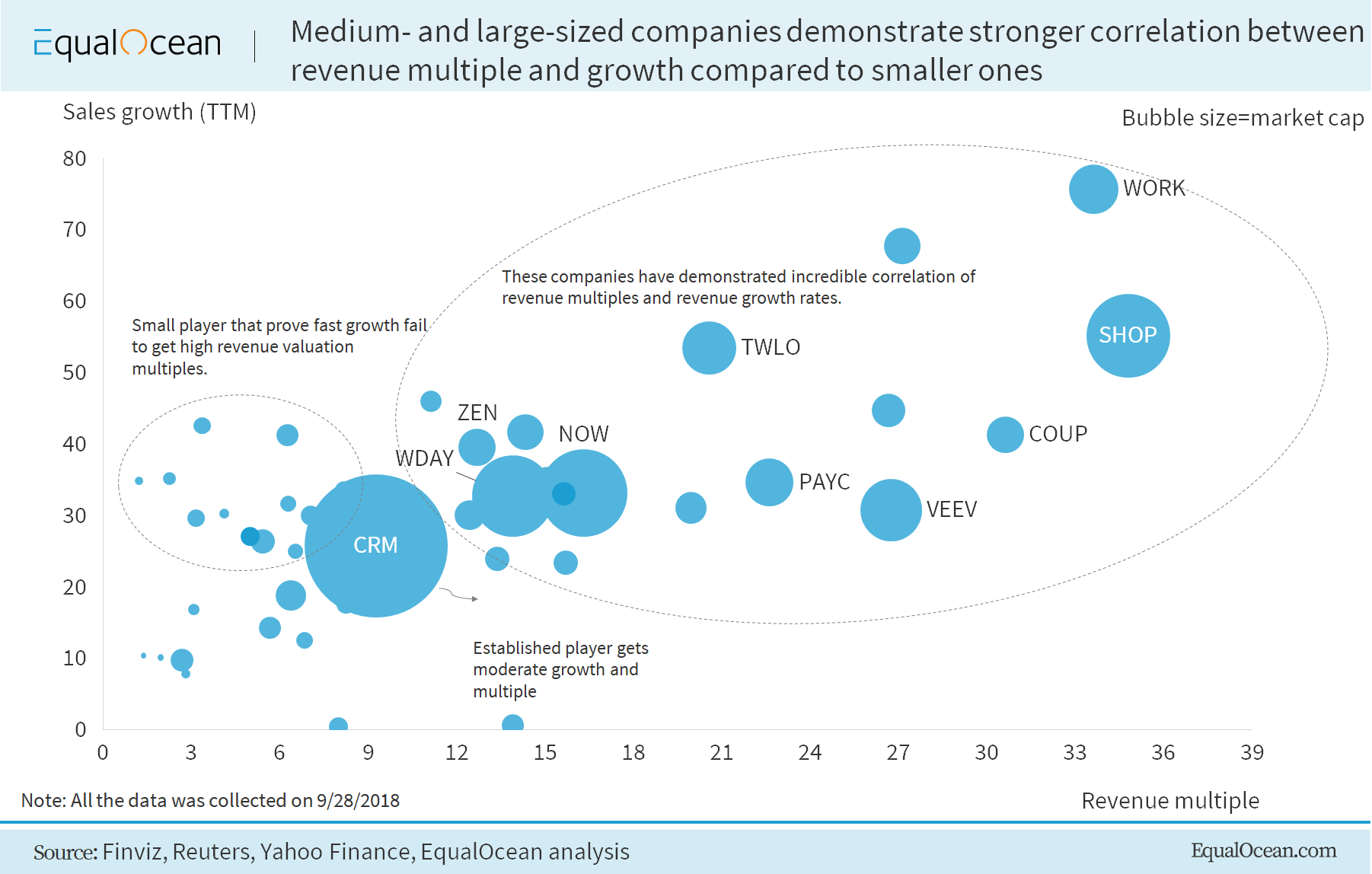 The logic is that a higher growth business generates more cash in the future relative to its size today than a slow growth company of the same size.  The correlation, however, is stronger for medium-and large-sized players than for smaller players. Shopify, with a 34.8x revenue multiple, has been growing at a 72% CAGR of revenue and recorded 55.33% revenue growth last year; Salesforce has grown revenue at almost 40% CAGR for 15+ years. It’s an established player and has moved into a mature stage, and, is now traded at a 9.27x revenue multiple. Twilio, which has been traded for ~3 years in the public market, grew its business by 53% last year. Its value is now as 21 times as revenue.

World Innovators Meet (WIM) 2019 officially opened with this Salon, and it is just the beginning of a series of Salons. The World Innovator Salon will also be held in Beijing as scheduled: Scan for more! 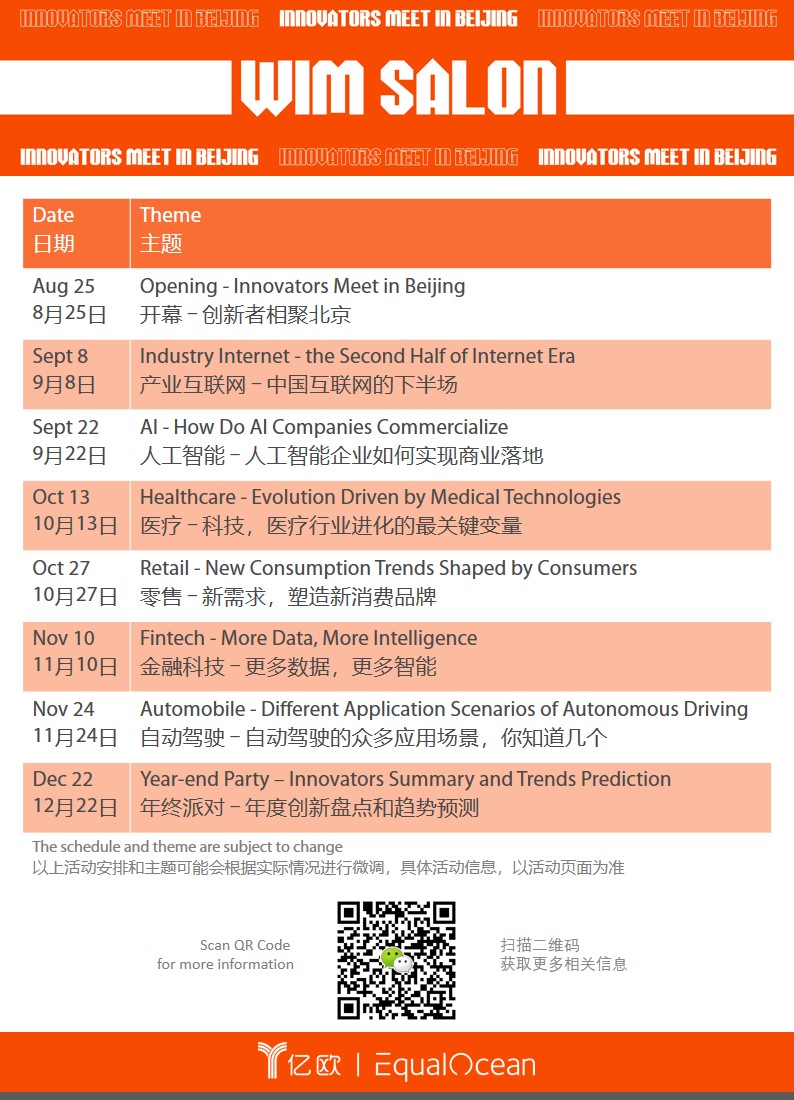