Expecting the ‘bullish morning star,’ NIO is prepared for a prolonged period of weakness. 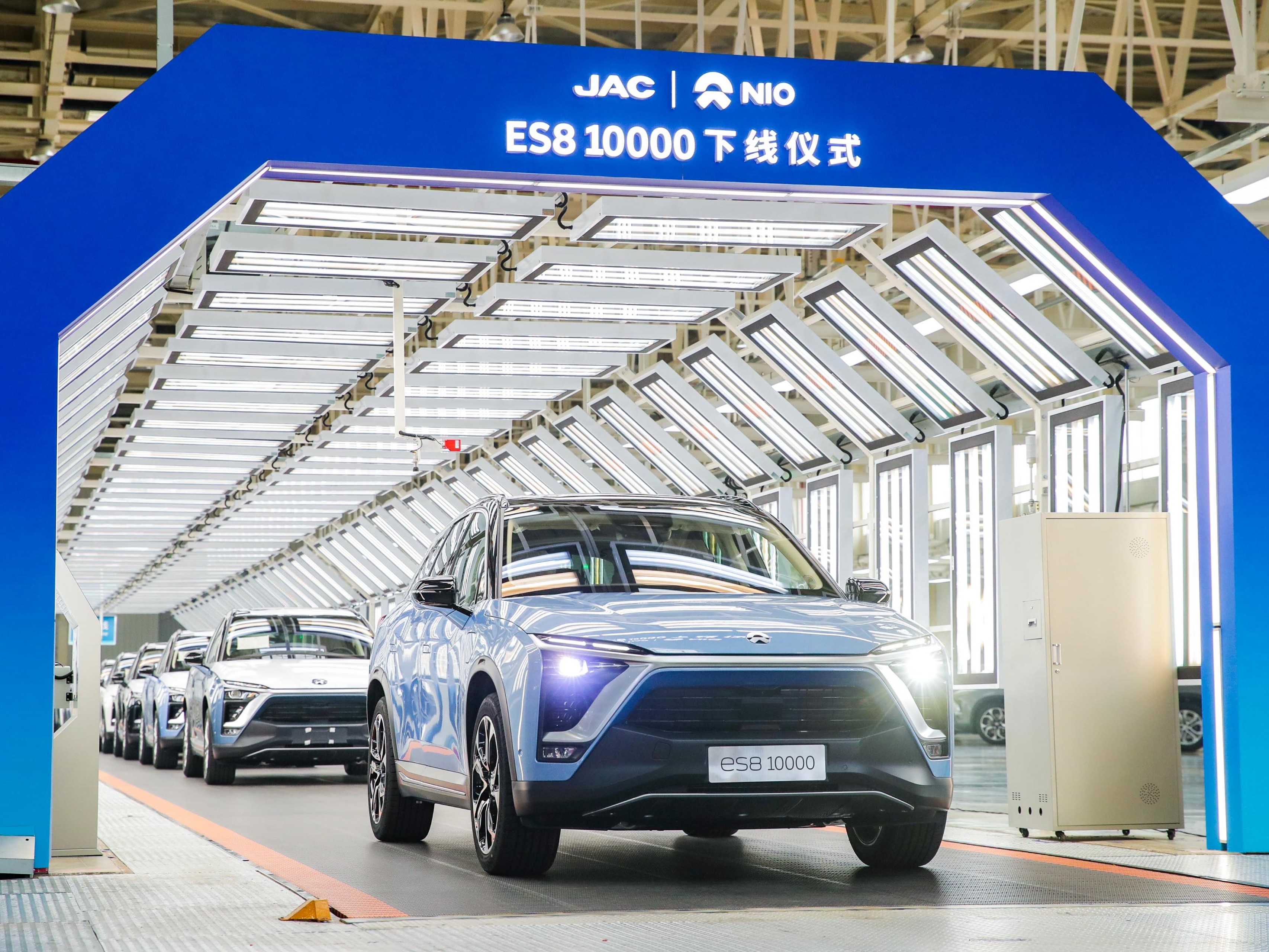 The slowing economy and the US-Sino dispute have hit China’s auto market harder than anything else. Sales of electric cars and plug-in hybrids (collectively known as new energy vehicles) slumped 33.1% and 38.4% in September 2019 compared to last year. Even established automakers like General Motors (Its sales in China tumbled 17.5% in September) and Ford (its sales plummeted 30.3% in the third quarter of 2019) have been reeling from the impact of weaker consumer demand.

While China is ramping up stimulus measures to boost consumer spending, it takes time for them to work magic on the economy. A slew of auto startups that are branded as “China’s answer to Tesla” are waiting to have their resilience tested by the market amid a major ongoing industrial overhaul that looks set to last well into next year.

It’s been a tough year for NIO, the Shanghai-based electric vehicle marker, as it seeks to survive a bleak macroeconomic environment and grapple with internal problems.

Media, industry watchdogs and analysts have not been favorable to the company. Venture capitalists, for instance, have expressed concerns as the auto market has been struggling against a slowdown.

Zhou Xiangdong, another manager with Demo Capital, claimed that NIO has been desperate for external financing to keep the company afloat.

NIO's stock performance has been disappointing 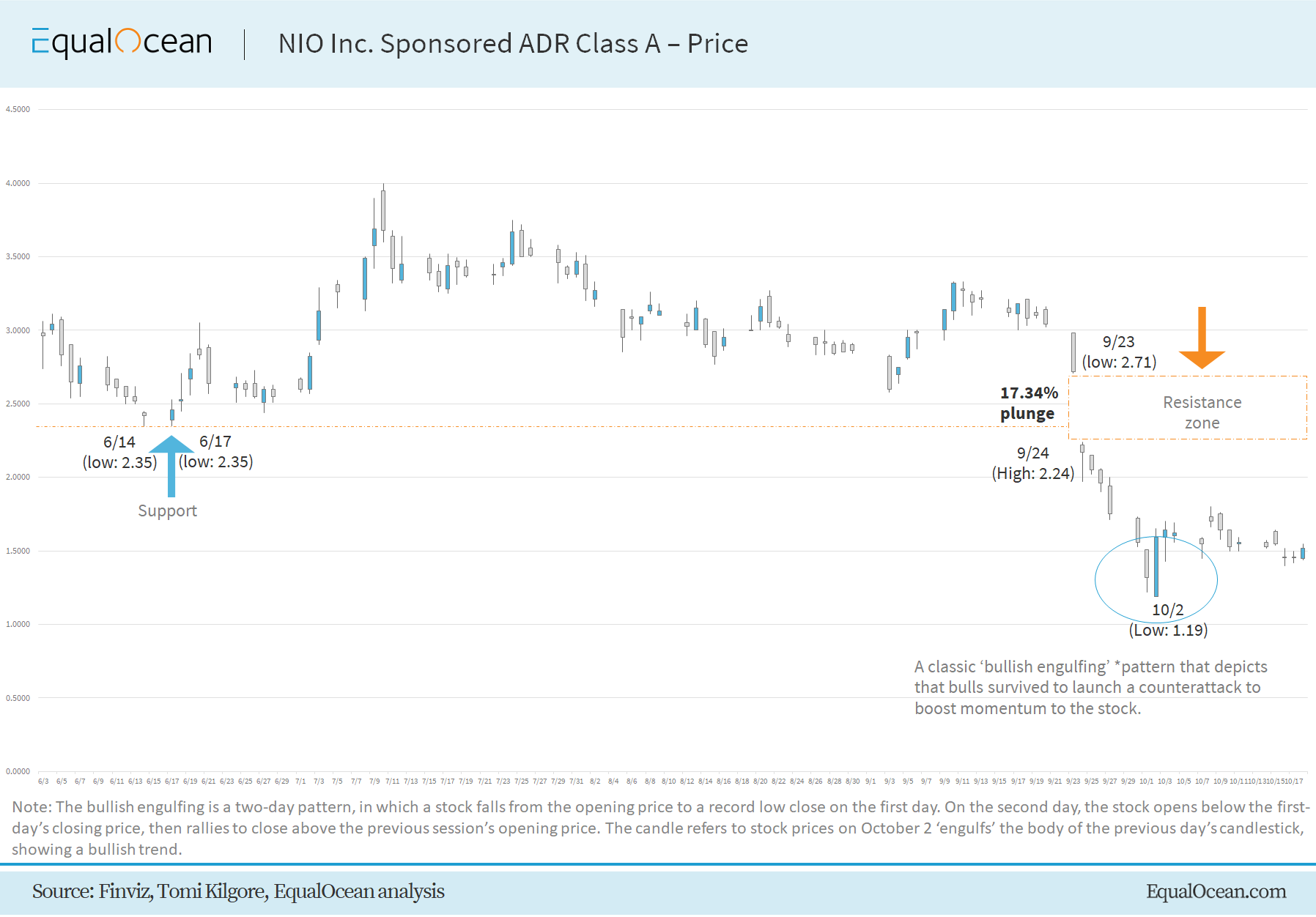 A series of internal issues including declining sales, car recalls and a high turnover rate has wiped out 76.14% off NIO’s stocks to date, while its arch-rival Tesla’s shares have shed 22.79% and SPY (SPDR S&P 500 ETF Trust, which is designed to track the S&P 500 stock market index) has climbed 19.23%.

NIO stocks have experienced a previous ‘support’ period (support occurs where a downtrend is expected to pause, due to a concentration of demand) that starts on June 17 with an intraday low of USD 2.35. The support ends in the resistance zone created by a 17.34% plunge on September 24, when the intraday high of USD 2.24 is well below the September 23 intraday low of USD 2.71.

A so-called ‘bullish engulfing’ reversal pattern has been created on October 2, when NIO’s stock recorded an intraday low of USD 1.19. Key resistance (resistance occurs where an uptrend is expected to pause temporarily, due to a concentration of supply) remains and the stocks failed to recover lost ground.

Chinese tech media 36Kr (the link is in Chinese) reported on Oct 15 that NIO was in talks with the government of Wuxing District of Huzhou City, a city in Zhejiang Province, about  a 5-billion-yuan (USD 707 million) investment deal and a plan to set up a car factory there that can churn out around 20,000 units. “The story is merely a publicity stunt to bolster NIO’s stock price,” Zhou said.

The contract turned out to be rejected by the local government on October 16, sending the stock plummeting 5.8% in afternoon trading. Houzhou government stepped back facing ‘high risks’ of the case. Previously, the government had shown unprecedented interests in car-making business and invested CNY 20 billion (USD 2.8 billion) in a ‘supercar factory program’ led by Leshi (300104:SZ) in 2016. It introduced another car program with Youxia Motors (the link is written in Chinese), which sees to start mass production in the third quarter of 2020, according to the company’s co-founder Li Wei.

It is challenging for local governments to support two OEMs at the same time. In addition, observing Leshi's failure, officials became prudent in investing in car manufacturing.

After an overview of NIO’s Q3 financial results, which likely triggered the long-waited  ‘bullish engulfing’ pattern, we believe the slump of its stock is likely to bottom out. Despite all the negativity engulfing NIO, the company has already started to steer itself towards a safer position.

NIO’s ES6 sports utility vehicle ES6’s price-performance ratio has improved a lot compared with ES8, another SUV model. ES6 showed encouraging delivery results in Q3, compared with ES8. However, ES6 is cheaper than ES8. If we take the price gap into consideration, we expect ES8 and ES6 to generate yearly revenue of USD 62,000 and USD 54,000 per unit.

We use the cost-to-revenue ratio to assess how much it costs NIO to deliver vehicles in Q3. Historically, the ratio ranged between 1.07 and 1.33. We used a conservative number of 1 to cap the cost of sales at USD 260 million.

The debate over huge staff paychecks, especially if they are lured from Silicon Valley, has been over as NIO cut headcounts and closed its Bay Area office. A former NIO employee said that those laid off were mostly from marketing and overseas R&D departments.

NIO had the ambition to build an EV ecosystem and it has been over-confident about what a new EV maker can do in today’s China  -- until the company fell on hard times.

NIO’s business has encompassed almost every aspect of a car’s lifecycle, from car making to marketing and sale. Its operations either represent future technology trends or its endless pursuit of better user experience. Examples abound of its huge investment in a host of segments including autonomous driving research (setting up R&D centers in both China and the US), NIO Power (which assuages car owner’s anxiety about the low battery), NIO App (car owner community) and NIO House (direct sales).

NIO found it hard to sustain a business model that is underpinned by large capital infusions, which are hard to come by when the macro-economic environment deteriorates. In a bid to reinvent the business model, the company has been considering spinning off NIO Power to make it an independent unit.

In the past five years, NIO is changing how this traditional industry sells, communicates and interacts with consumers, causing disruption to the value chain. While the company has just around 190,000 vehicles on the road, NIO App has logged over 800,000 downloads and over 200,000 daily active users (DAUs). Users of NIO app have formed a vertical community with tremendous ‘private traffic ’ – a marketing buzzword in China these days that refers to influencers and brands are marketing in vertical communities or websites. As such, NIO needs to think twice about streamlining its operations without harming the brand image.

We decided to use 0.5 and 0.8 as our benchmarks for evaluating R&D expenses-to-revenue and SG&A-to-revenue ratios in Q3. 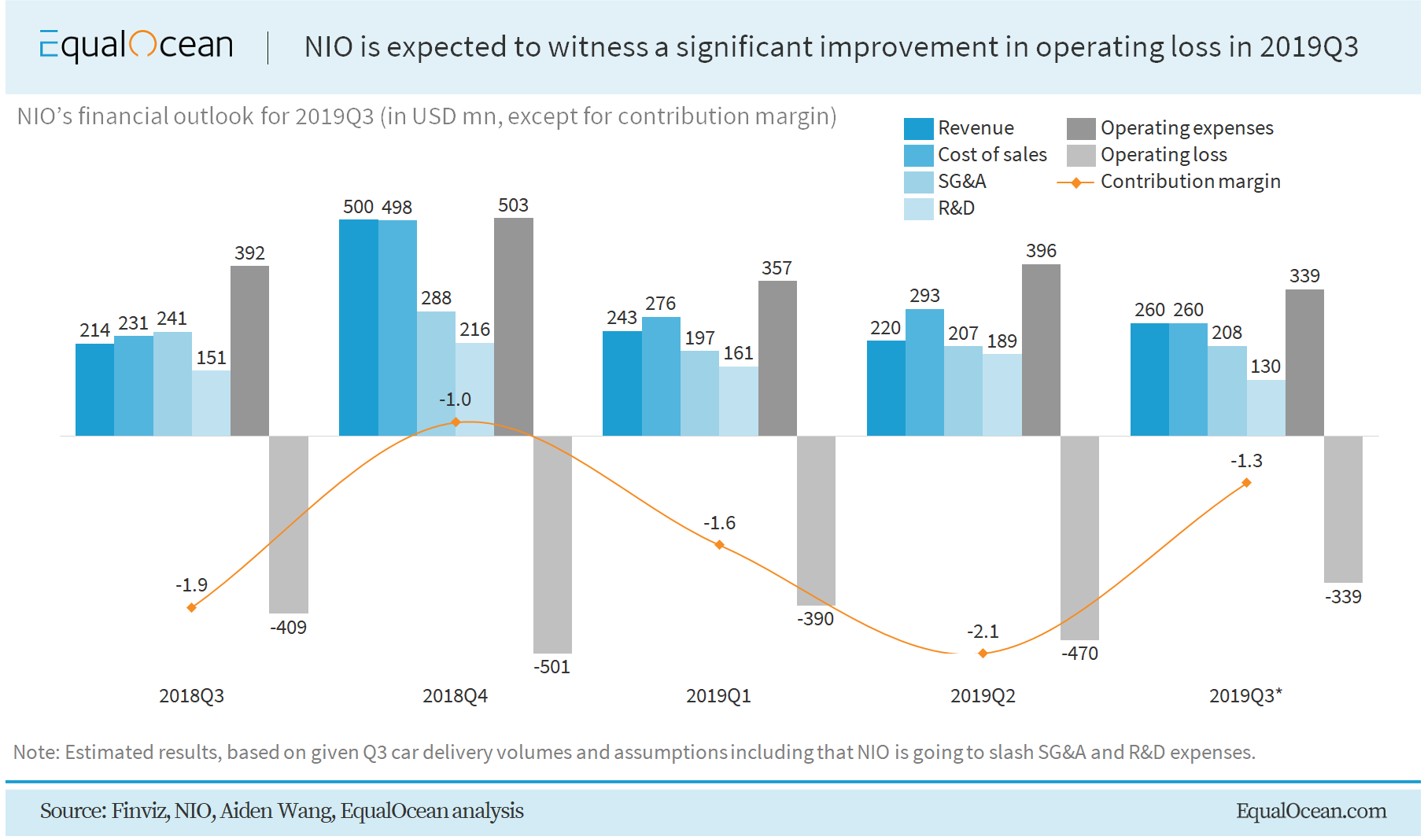 With all these factors put together, NIO is expected to report USD 339 million in operating loss in Q3,  a decline of 28% quarter on quarter. The dwindling loss would be a significant improvement but it suggests profitability is still a long way off.

Moreover, we are still concerned about the sheer size of the company’s cash-burning game and its inability to service outstanding debts. In the second quarter of 2019, the company slashed borrowing but reported widening losses at a rate of 125% over the previous quarter, with its cash pile also shrinking by 54%.

By the end of Q2, NIO had CNY 3.46 billion (USD 489 million) in cash and short-term investment. NIO had around USD 689 million in liquidity at the beginning of the third quarter, with the USD 200 million convertible notes purchased by Tencent and its founder Li Bin (William Li). In our estimates, NIO has to spend around USD 339 million in the third quarter. On current trends, NIO will need another USD 1.2 billion for the next year. 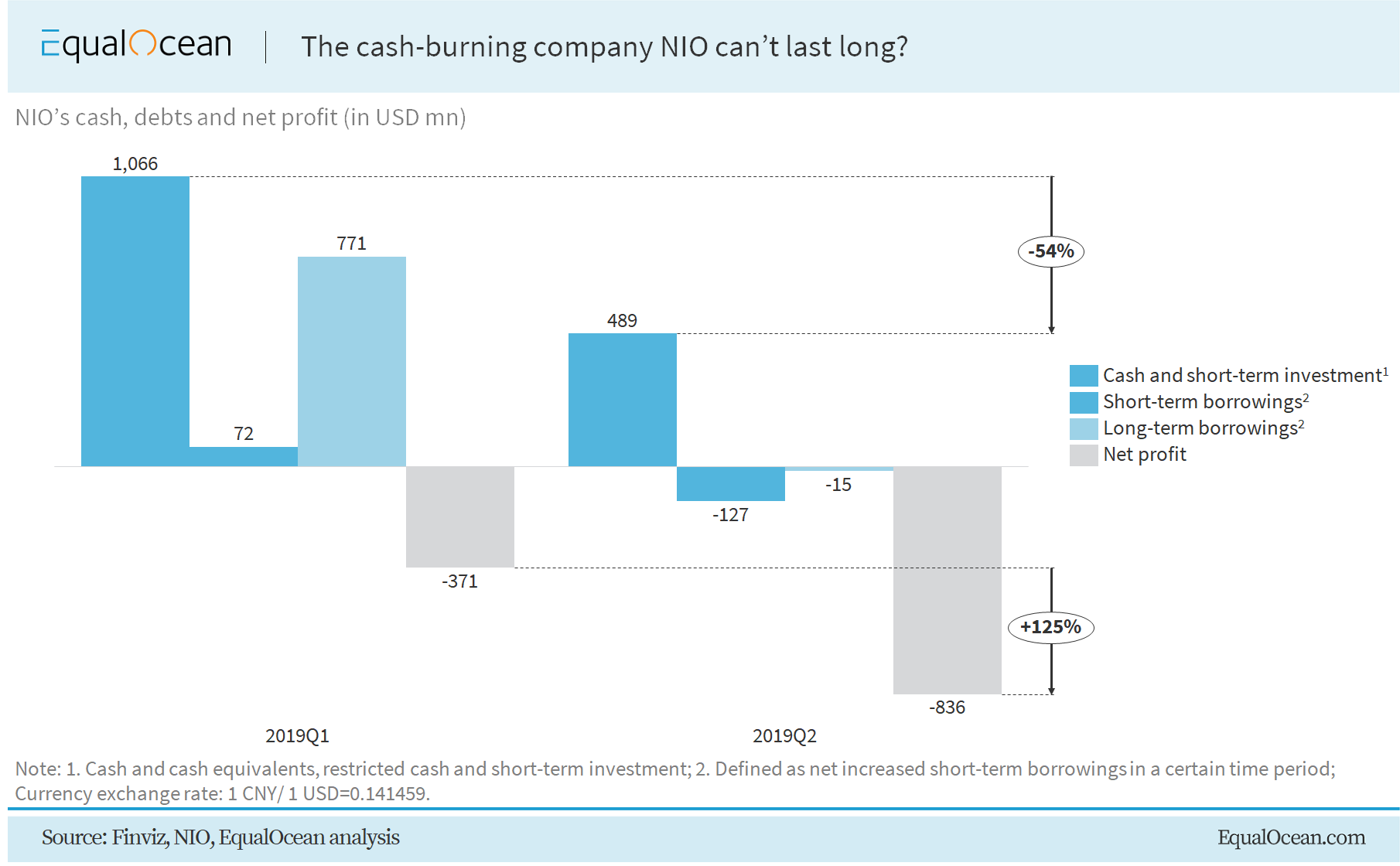 “The worst thing that could ultimately happen to our company is that we end up becoming another Qoros (a car brand that has been acquired by Chinese conglomerate Baoneng), and that’s the last thing we expect,” says a NIO executive who asked not to be named. In this case, building a long position at some point may seem to bring profits as a buyout bid could be another lifesaver for the sinking boat.