Meet LinkingMed, the Chinese Startup Who Wants to Redefine Radiotherapy

EqualOcean sat down with the CEO of LinkingMed to get a glimpse into his business. The following is a recap of our conversation on how the Chinese startup is striving to flourish in the oncology field with its cutting-edge technologies. 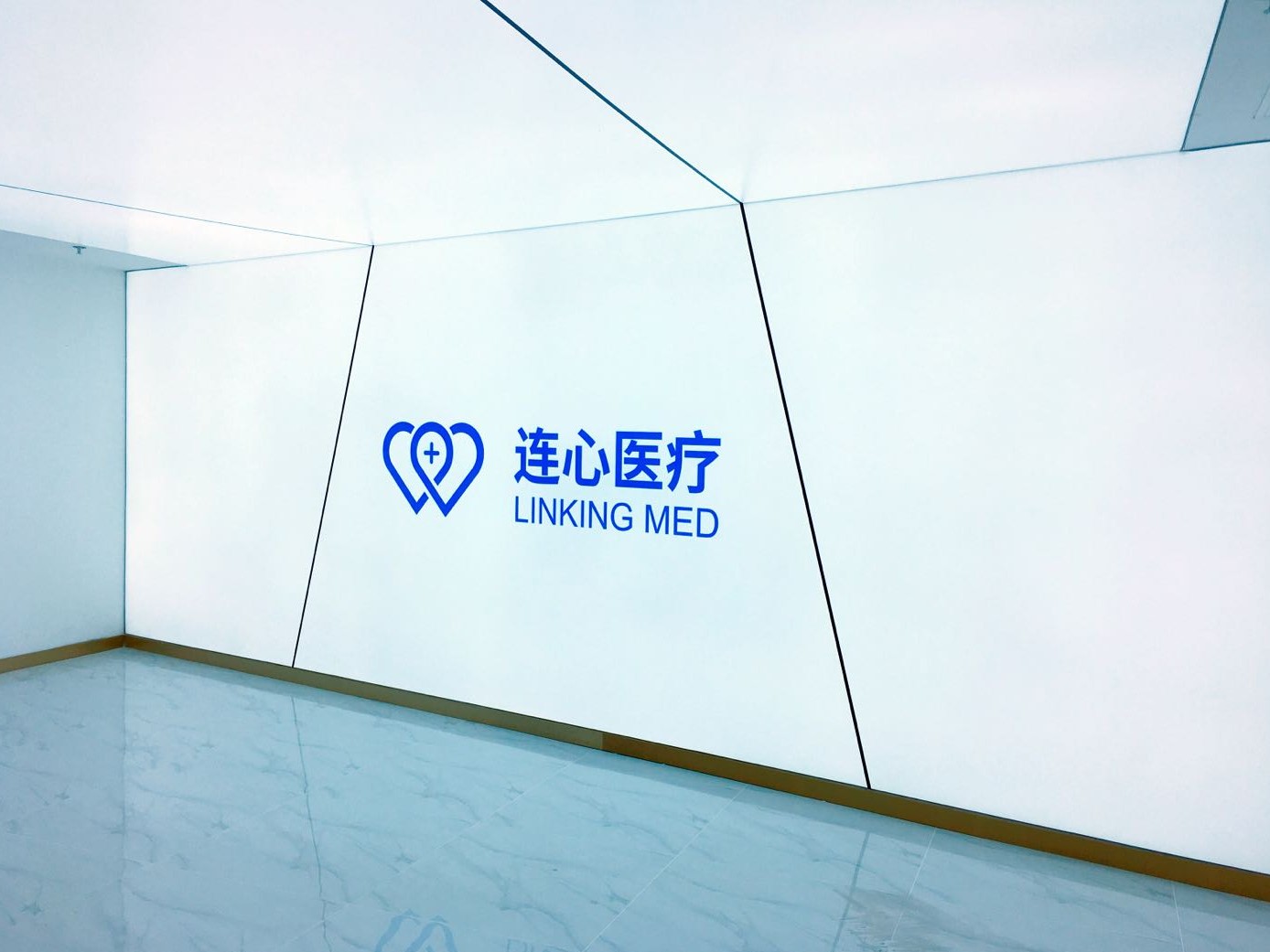 "We were late when the Western countries updated their infrastructure to 3G; we were just on time with 4G and the vanguard of 5G. In radiotherapy, we're still lagging, but I am going to change this," said Ryan Hua Zhang (章桦), the CEO of LinkingMed (连心医疗).

He then explained what triggered his move in healthcare, driven by what he said is China’s newfound strength in artificial intelligence.

EqualOcean initially reported about this radiotherapy-focused medical cloud service provider when it secured its license to operate commercially on September 16 this year. On October 30, the company announced that it had attracted further investment from a couple of venture capital firms, worth over CNY 40 million (USD 5.71 million).

Key Takeaways from the Interview

Priced at around CNY 1.2 million on average, the company’s software has been deployed to over 57 hospitals in China as of October 2019.

LinkingMed and several other companies that provide deep learning-based products have been commercializing their products as "research products," marketing them to hospitals as per regulations.

LinkingMed's largest expenditure stems from its human resources. The company pours money into hiring and retaining algorithm and photon experts. The company cuts costs by relocating its 60-strong team of software developers to Chengdu, a less expensive city in southwestern China.

Zhang is confident in the competitive edge of his company vis-à-vis multinational companies in China and overseas players thanks to the difficulty for them to access medical data. Nonetheless, he is concerned about the pressure brought on by domestic rivals with strong government relations skills.

EqualOcean: Thanks for letting us know more about your company Ryan. It delights us to be able to explore more growth-seeking Chinese firms and their solutions for the market. But, first of all, tell us your motivation to accept an interview in English. Are you eyeing a move to the Western markets?

Ryan: Exactly, because we are ready, and are already in advanced talks with a couple of hospitals in the UK, and the US. First of all, we secured the Class III type of license from the National Medical Product Administration (NMPA), which is the Chinese FDA, facilitating our commercialization process in China. We are the first company in China amongst the deep-learning-based medical product providers who obtained this, which will dramatically boost our revenues within the mainland. Secondly, our product is ready and competitive.

Last summer I went to Silicon Valley and the UK and I've seen our prospective clients' reaction to our software. Ultimately, we provide a solution to a global problem, not only to the Chinese market. Last but not least, we have to go global to get bigger in the long term, and I'm preparing accordingly.

EqualOcean:  We have been recently witnessing a proliferation of deep learning-based developers in healthcare. What triggered your foray into the Chinese market?

Ryan:  Simply, the market. It is still nascent and I am one of the early movers in this yet-to-expand market. In China, 22% of the cancer patients receive radiotherapy, whereas in the US the ratio is 65%. Chinese patients have to go for the surgery and chemotherapy options simply because we can't provide related facilities and oncologists in radiotherapy.

In China, we were impeded by both cost-side hurdles and human-capital scarcity in radiotherapy. Radiotherapy equipment is one of the most expensive devices in healthcare, priced at up to CNY 45 million. Varian from the US and Swedish Elekta are the main suppliers; not to mention that China could not bring its global player there, yet.

Chinese hospitals could not afford these products for a long time, yet we're increasing our hospitals' budgets and demanding more of these devices now. There will be a supply-side boom in radiotherapy, gradually meeting the excess demand.

We also expect a regulatory push for the treatment. Currently, the first- and second-level hospitals can provide radiotherapy services in China, but the government is considering to provide the license to the third-level clinics as well. There is around 3,000 such hospitals in the entire country.

EqualOcean: The technology behind your service has a very particular applicable scenario, so is the sector your company has been pouring its resources into.  Why did you decide to apply deep-learning to radiotherapy?

Ryan: I did my bachelor's degree in the English Language at the Southeast University of Nanjing. I was into entrepreneurship these days and I realized I had to learn computer science if I were to be a great entrepreneur. The realization came after a series of unsuccessful projects I initiated. (Smiling)

I started to pursue my master's degree in software engineering at the same school, and my mentor was working on artificial intelligence, particularly face recognition. He introduced me to Microsoft, and I worked for them as a researcher. This two-to-three-year experience has presumably changed my life. Meanwhile, I made my mind to go on with a Ph.D. overseas. A Dutch professor from Southeast University referred me to a deep learning-based human-machine interaction project in Amsterdam with an EU scholarship. Though I performed well in my healthcare-focused AI project the government cut off my scholarship in 2008, just after the financial crisis.

The European chapter was not done for me, I wanted to explore the region more. I applied for 42 jobs around Europe, did two interviews and got one offer: The Netherlands Cancer Institute (NKI). There I learned, healthcare providers always have money, even in the darkest times. In 2013, I was well equipped and clear on what to do: go back to China and provide a deep learning-based radiotherapy product for Chinese hospitals.

EqualOcean: Most of the AI companies in China are focusing on early diagnosis of several types of cancers. LinkingMed is applying its solution to a radiotherapy process and it is a complex one. We want to understand exactly how your product creates added value.

Ryan: Radiotherapy, particularly external beam therapy, is a tedious process for oncologists because of the sensitivity of the therapy. Radiation beams should target the cancerous cells as precisely as possible, in order not to harm the healthy tissues that surround the tumor. Especially if the tumor is in the brain even the best oncologist thinks twice.

On average, it takes three to four hours for an oncologist to contour the precise target location of the tumor. With our software, it is 20 minutes. This is our core service and it saves hours for the doctors while providing higher accuracy compared to human-driven contouring. Considering the overwhelming demand for a limited number of radiologists in China, we create tremendous value.

We've launched the app for all types of devices. Together with our medical cloud service, the doctor in Shanghai can serve the patient in Guilin: the only prerequisite is the radiotherapy device and facilities.

And, the interface is in English, since we believe our service ultimately has a global reach. 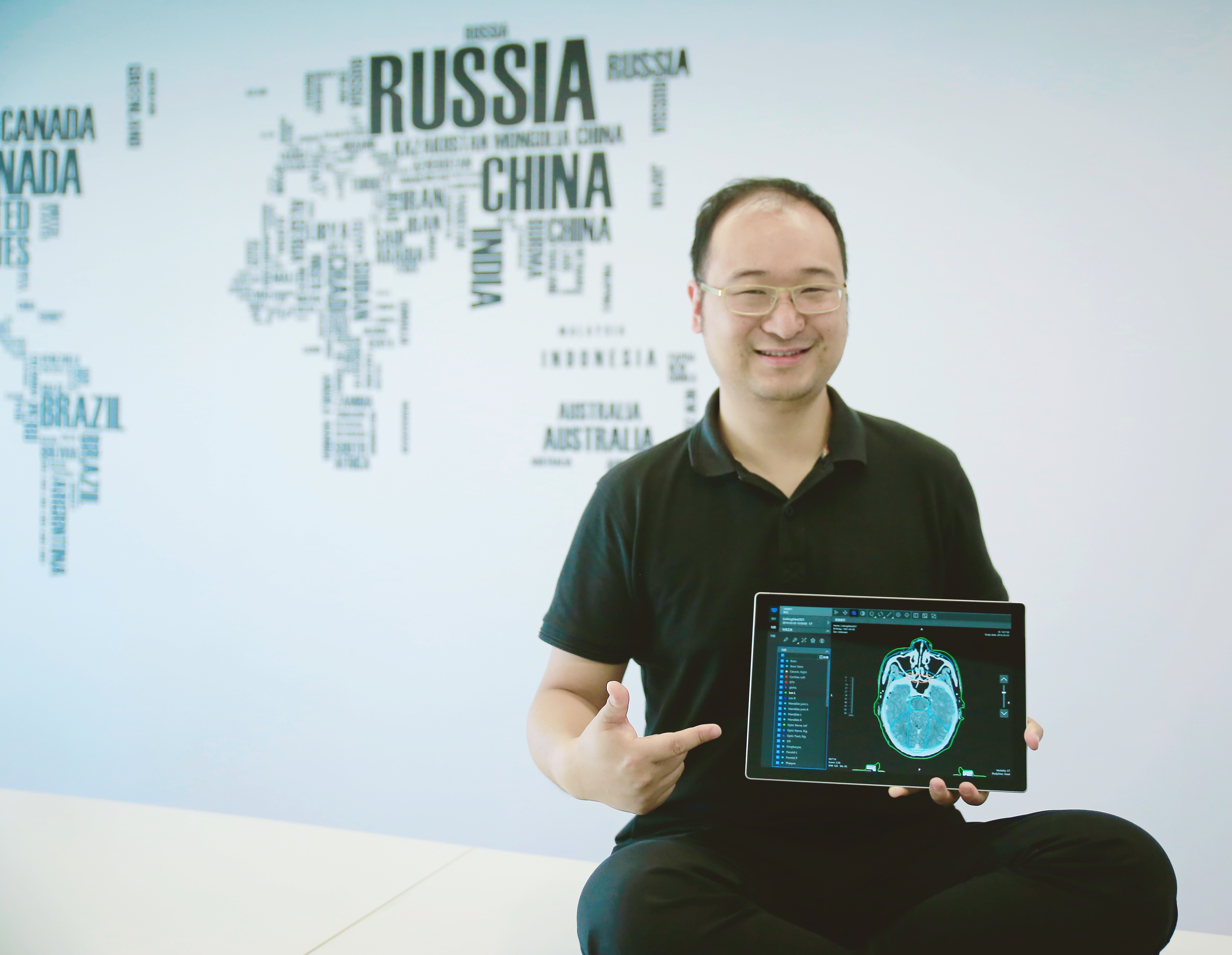 EqualOcean: Here it comes to the golden question then: how do you price it and how much is this product?

Ryan: Well, we tailor the price based on the traffic of the hospital we're selling to. I can tell you that the average price is around CNY 1.2 million.

So far 57 hospitals have deployed our products in China out of 1,600 hospitals that have been offering radiotherapy. Most of them are the first-tier hospitals, including Chinese PLA General Hospital (301医院) and Peking University Third Hospital (北京大学第三医院).

Until we obtained the Class III type license, we provided our product under the category of "research", as we could not sell it as a cloud or deep learning-based product. Since last September, we have been freely monetizing the product as it is.

EqualOcean: Ultimately, your contouring product is designed to obtain the data from the CT machine, and there are companies that actually produce these machines. They are providing cloud and AI-driven supportive services as well. They have abundant data, excess technical and financial capacity. How will you compete with those behemoths?

Ryan: Medical data accessibility in China is a complex issue. Take Siemens, GE, and Philips: they provide Chinese hospitals with these imaging devices, yet they cannot process or obtain the data from the hospital. Chinese hospitals' data stay within the walls of the hospital, and it is arduous to take it out: unless they have a good reason. Therefore, I am not concerned about the competition I will be facing with the overseas players.

But I will be competing with the players in China, such as United Imaging (联影). On the other hand, data abundancy does not always mean algorithm accuracy. For accuracy, we need standards, which we are working on meticulously.
It is also about the doctor and clinic networking. LinkingMed built a radiotherapy community in China with over 25,000 oncologists in it. They use our product and discuss treatment models all around the country. This is yet another advantage we have that I'm proud of.

EqualOcean: Serving this network requires a huge team. How large is your team and what is it composed of?

Ryan: In Beijing, we have around 20 algorithm experts and developers, most of whom are from Tsinghua University, and this is why we're located in Wudaokao (五道口). The algorithm developers are the people who build our product's core value; they are expensive and hard to find. We also have 10 BD managers in Beijing, who are traveling around China to sell our services. In Shangai, we have around 10 photon experts, who know how radiation works. They are even rarer, experienced and expensive. In Chengdu, we have a group of 60 software developers, who design and develop the product. It was a cost-effective decision to build the developer team in Chengdu.

EqualOcean: What is the big picture and vision of LinkingMed?

Ryan: The first radiotherapy device developed in China was in 1975 from Tsinghua University. At that time, there was not even any hospital that could buy the product. The device was for research purposes. We are a latecomer, lagging behind and immature in radiotherapy. But that's the story of contemporary China: we lagged behind, worked hard and started to catch up, and ultimately become better, and even superior.

LinkingMed will be helping China to catch up and be superior in radiotherapy. Ultimately serving globally with state-of-the-art Chinese technology with its own standards.

That is our dream and we're working hard to make it.

Chinese startups' and private equity's interest in oncology have mainly been towards immunotherapy in the last years. Yet, radiotherapy is a vital treatment in 40% of cancer patients globally. The gap is obvious given the Chinese ratio of 22%. The undervalued radiotherapy scene in China may be a lucrative scene for medical device producers and other players to enter in the coming years. 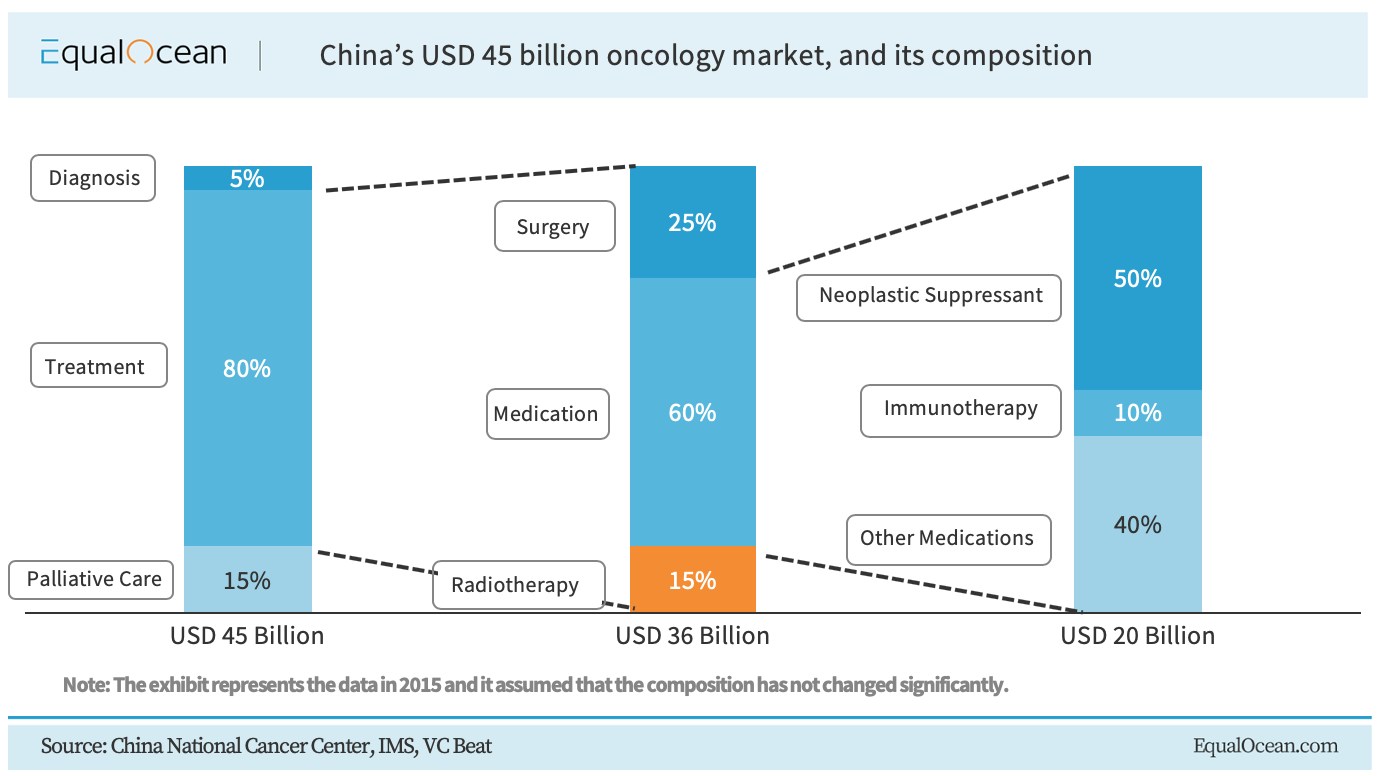 On the other hand, LinkingMed's particular service has not been tested by other Chinese companies, creating an advantage for the firm. However, it has yet to be known how high the barrier is for dozens of other AI-driven diagnosis firms to create a radiotherapy treatment planning product. The company's global peer is Helsinki-based MVision, a private company with an unknown equity structure. 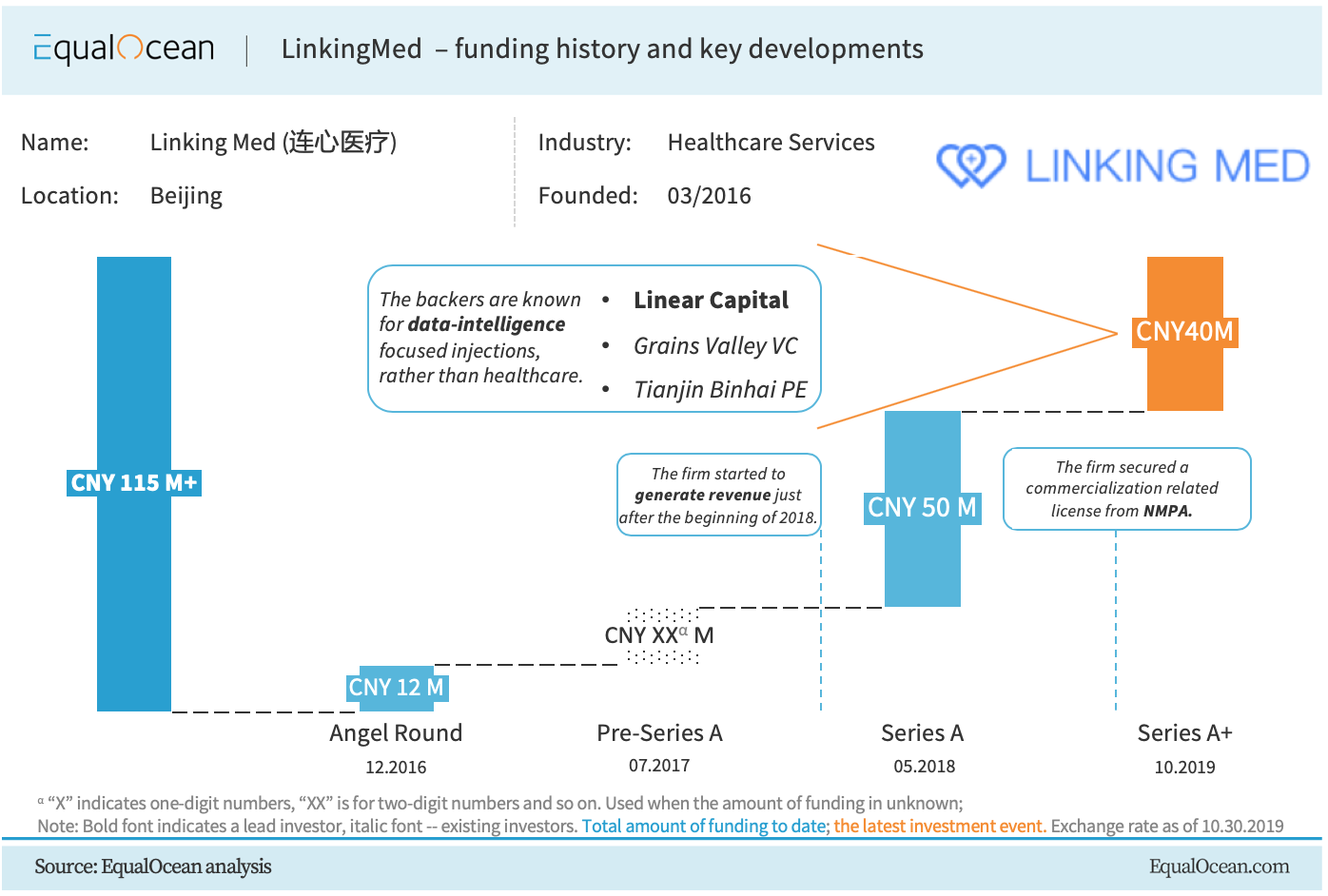 Venture capital interest in LinkingMed stems from the company's practical moves toward revenue generation. Its investors are more from technology and data-driven businesses background, not from healthcare.

More analysis shall be made to decide whether the product is really needed by the healthcare providers in China. Considering the prematureness of the industry, LinkingMed is yet another company that is worth following in the coming years.