The European crypto hub is not London, Paris or Berlin, but a charming Swiss town named Zug. The financially savvy nation seems to be striving to hedge the risks involved as it manages a decline in its world-renowned banking system. 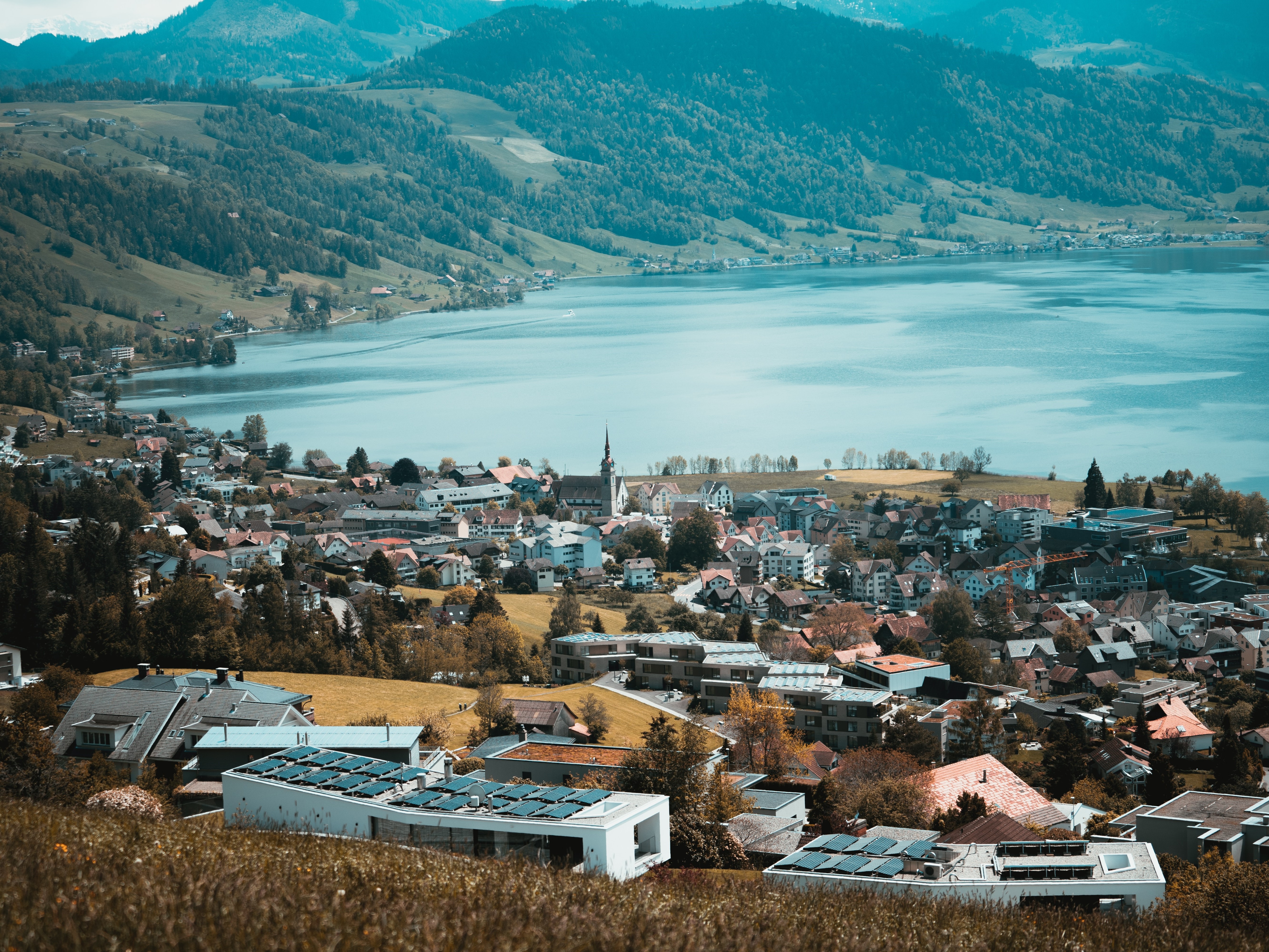 Switzerland, a peaceful 'banker's paradise' for centuries, has seen its worldwide reputation walk out onto thin ice. Compared to its former glory, the country is looking a great deal more fragile, due in part to pressure from the United States and the European Union.

The country is now actively embracing blockchain, a so-called decentralized trust-based network technology that is believed by many to be set to reshape the banking industry in the near, foreseeable future.

According to analysis from the Crunchbase database, there were 14 blockchain-related funding events in Switzerland last year, which raised a total of USD 218 million in financing. 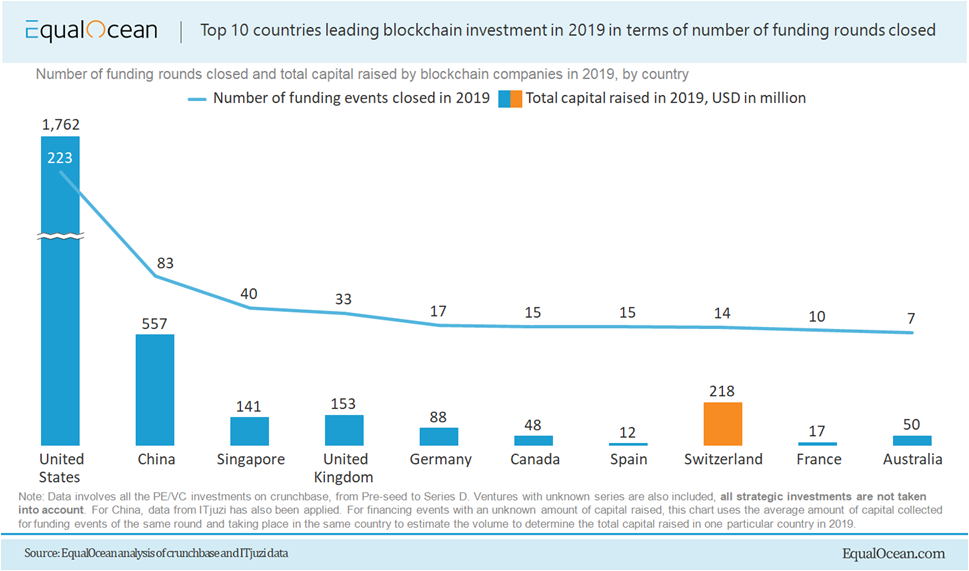 Though Switzerland didn't have such an eye-catching figure in terms of the number of funding events among the top 10 countries that led the global PE/VC investment rankings in 2019, the results are staggering enough if we look into the total capital raised. The USD 218 million figure ranks first place in Europe and third place worldwide.

The trick of this well-heeled country in its blockchain endeavors lies in its incredibly high volume of average capital raised in every single related funding, as compared to its counterparts. The number was USD 16 million in 2019, twice as much as that of the United States who ranked the second under this aspect. 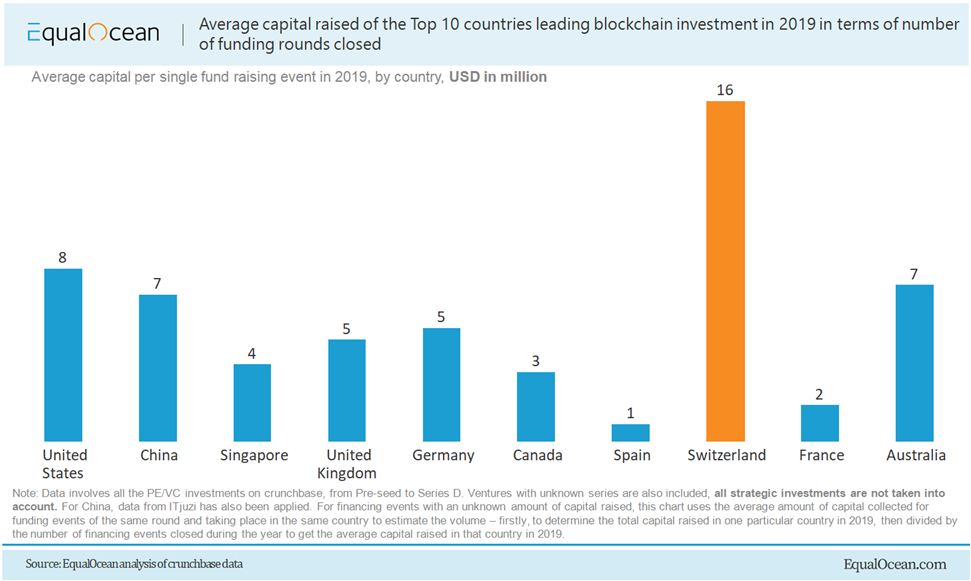 Where and why in Switzerland?

We could see that the affluent nation is seeking for a future beyond managing the fortunes of the ultra-rich. With its crypto-friendly environment and sound tech infrastructure, more and more blockchain startups have emerged. The 'Crypto Valley' that has emerged is centered on Zug, a historic lakeside town about a half-hour train ride from Zurich.

Zug, the semi-famous 30,000 populated Swiss city that was previously known for being the 'tax haven' focal point in the famously tax-defying country, is now home to more than 800 companies operating blockchain-related businesses. Around 100 of these were established in 2019. In the '2019 State of European Tech' report published by Atomico, a VC firm headquartered in London, Zug's Crypto Valley has been ranked as the fastest-growing tech hub in Europe. 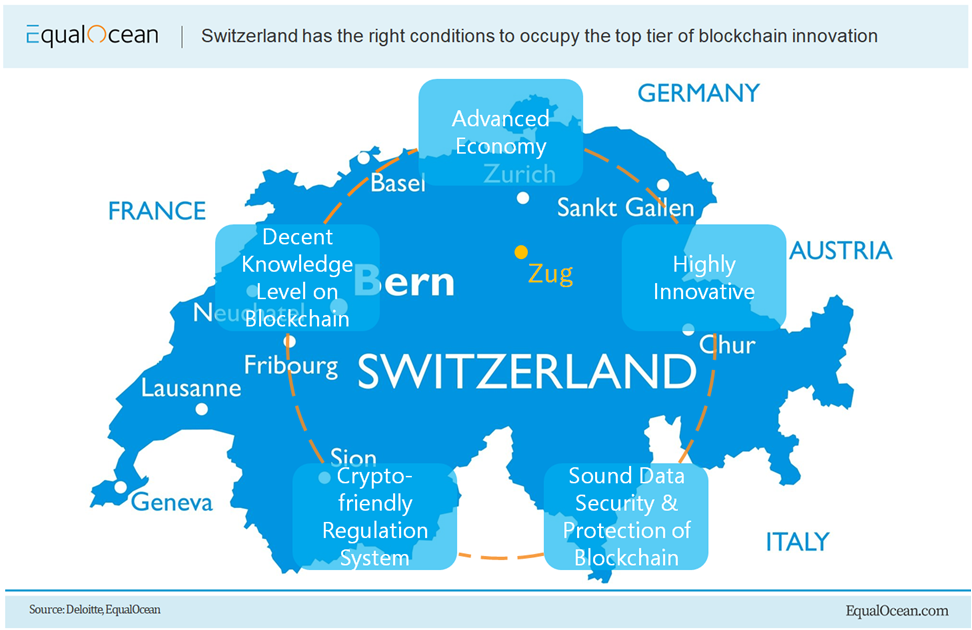 As one of the most advanced economies in the world, crowded with financially savvy bankers, boasting a crypto-friendly regulation system and solid data security governance, Switzerland is well poised to uphold the ongoing development of Blockchain:

1. According to the World Bank, the country is in the first tier worldwide (higher than 2.19%) in terms of gross domestic expenditures on research and development. Besides, Switzerland had ranked first place in the Global Innovation Index published by INSEAD and the World Intellectual Property Organization for eight years in a row, as of 2019. 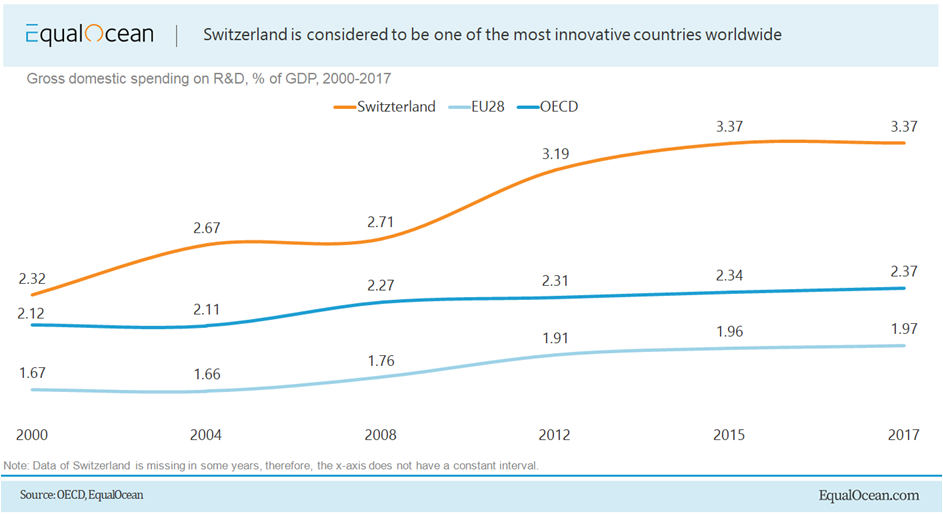 3. Policymakers in Switzerland are paying close attention to blockchain technology.

In a report published by the Swiss Federal Council in December 2018, we find that "the Federal Council wants to create the best possible framework conditions so that Switzerland can establish itself and evolve as a leading sustainable location for fintech and DLT companies."

One year later, in November 2019, the Swiss Federal Council pressed ahead with this idea.

"The proposal aims at increasing legal certainty, removing barriers for applications based on DLT and reducing the risk of abuse," as noted by the Swiss Federal Council.

EqualOcean used the Crunchbase database to compile a list of the best-funded blockchain startups, most of which raised more than USD 100 million in funding in the three-year period from January 2017 to December 2019. 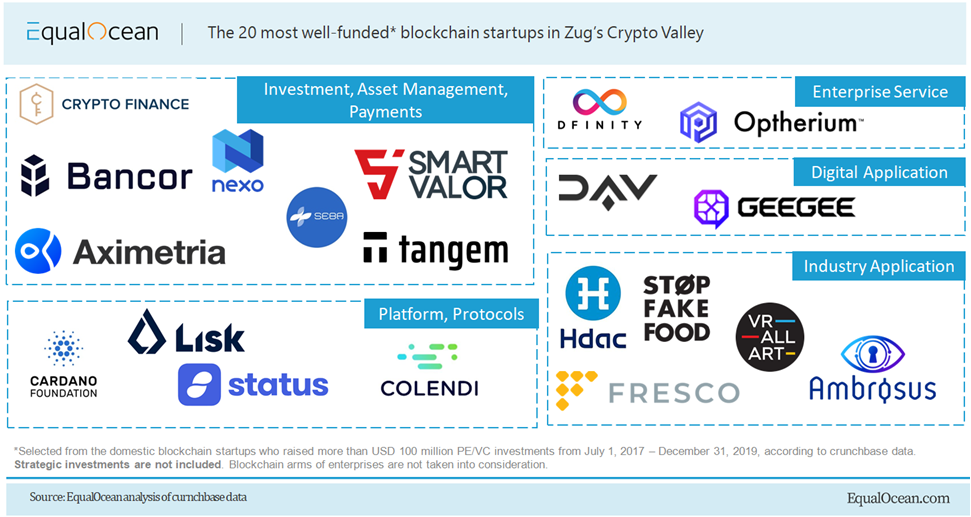 Investment, asset management and payments made up the core purposes of most companies on the map, which is somewhat unsurprising, given the strong historical roots of the financial services in Switzerland.

Industry applications occupy the second-largest group – a good sign apparently, suggesting for blockchain startups based in Crypto Valley that the value that their business may bring to the real economy has attracted the attention of PE/VCs.

Here we analyze blockchain-related PE/VC investment in Switzerland to give an overview of trends and money flows.

A total of USD 205 million in funding was raised from PE/VCs in 14 financing events closed in 2019, representing approximately 45% of what was raised in 2018 in terms of the dollar volume raised and 50 % in the number of deals. The two percentages simultaneously suggest that the average capital raised in a single funding event generally remained stable – not bad for those literally tech-driven players who focus on delivering real economic value to the country and society. 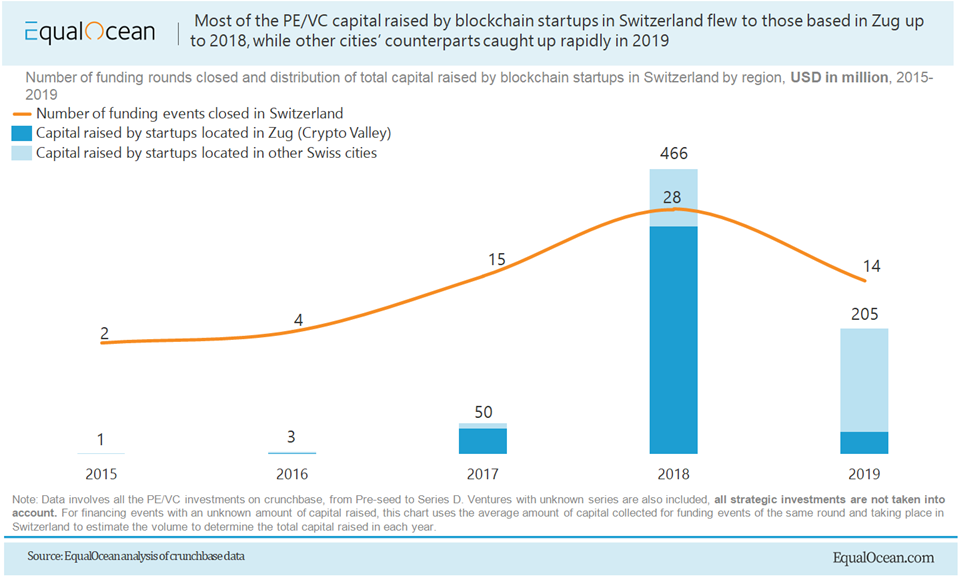 Meanwhile, we find that startups located in Zug's Crypto Valley no longer dominate the flow of PE/VC investment in Switzerland's blockchain industry. This may owe to the fact that Zug's Crypto Valley is expanding to Zurich, the nearby global center for banking and financing. The proportion of blockchain-related PE/VC investment raised by Zug-based startups as a percentage of that of the entire country has sharply lowered from about 80% in 2017 and 2018 to less than 20% in 2019. It is projected that this ratio will witness a pick-up in 2020; however, it is hard to say whether it will go back to the previous level.

Risk capital injected into Swiss blockchain startups concentrating on industry application sharply increased in 2019, which represents 50% of the entire pie (20% in 2017, 27% in 2018), while cryptocurrency and financial service-related startups are no longer the major focus of PE/VC investors, with injected risk capital down from over 50% of the entire industry in the country to just above 20% in 2019. 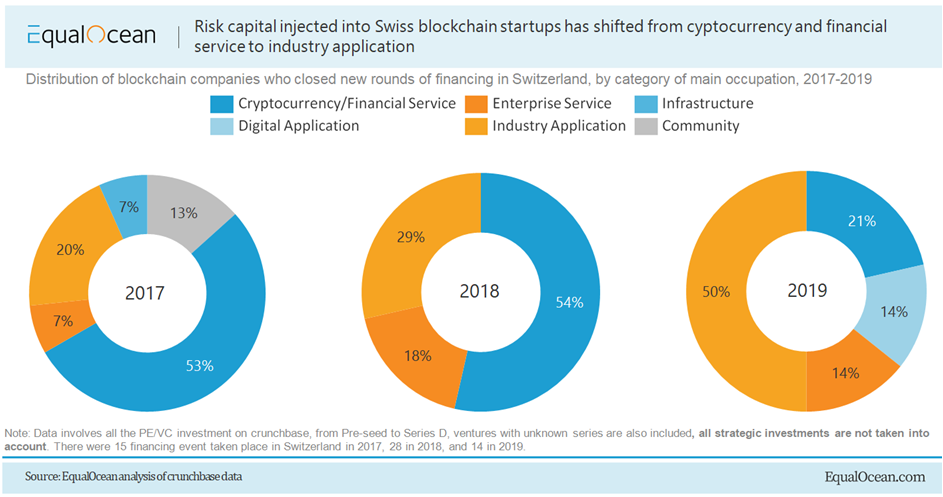 This possibly implies that the Swiss blockchain industry has entered or is about to enter a value generation stage.

... while the entire industry in Switzerland is still in an emerging stage

Over the three years from 2017 to 2019, about half of the PE/VC investment raised by Swiss blockchain startups was in seed rounds, suggesting the industry is still in an emerging stage, where the players go through 'birth and death' at a rather fast pace. 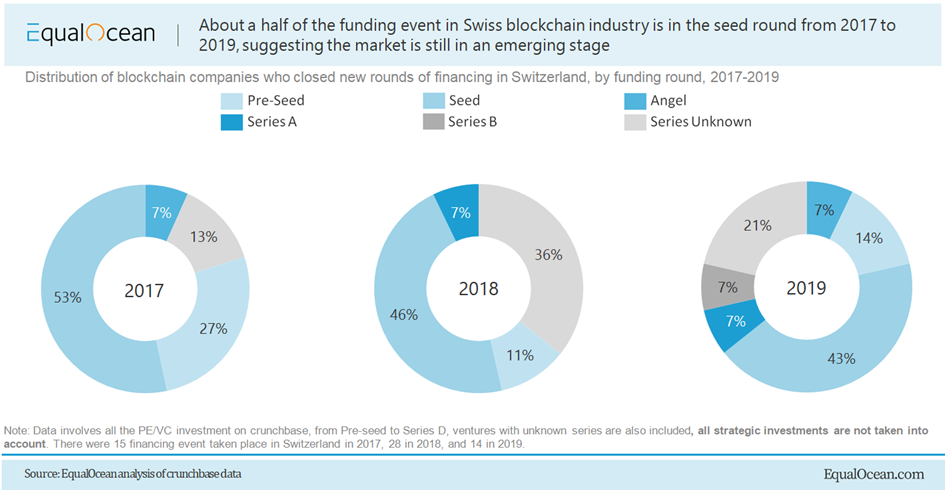 Meanwhile, a good sign is that the percentage of the seed rounds in the entire pie has gradually decreased throughout the three-year period. Series A, as well as Series B rounds of financing, started to emerge in the industry of Switzerland, implying several initial leaders are coming to the surface.

CONTACT US
Scan QR code to contact us for professional consulting services
Next article
Artificial Intelligence in Beijing, Top 20 Startups