The fintech unicorn is shaping an open and inclusive blockchain ecosystem, focusing on building up infrastructures that able to serve the real economy. 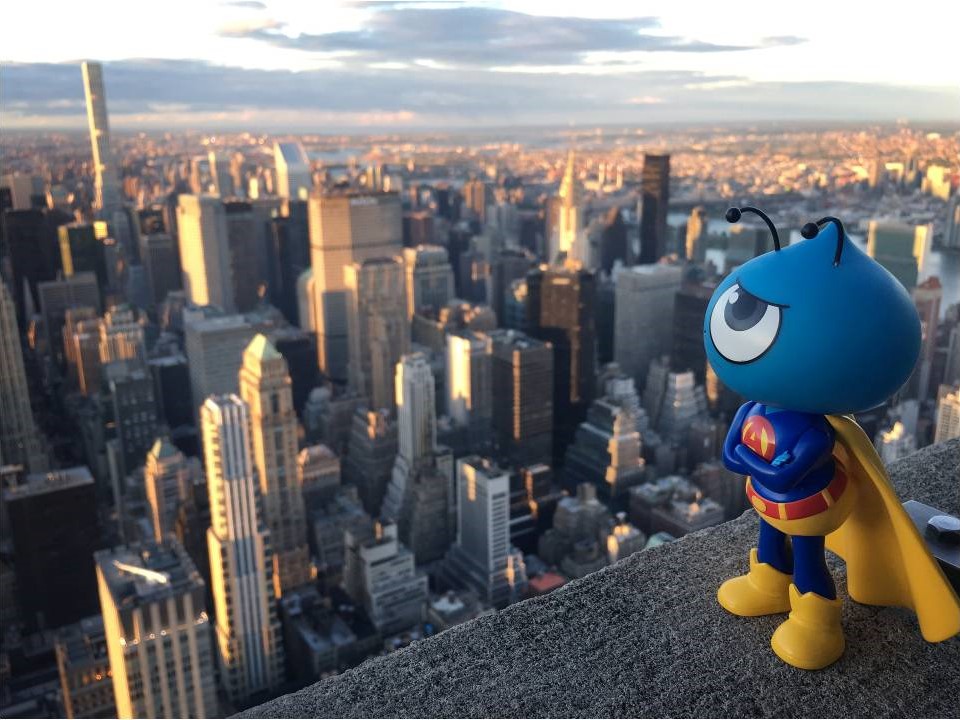 "Blockchain is not a bubble, but Bitcoin might be. Bitcoin is only a tiny application of blockchain," remarked Jack Ma during the 2018 World Intelligence Congress." At least inside Alibaba, blockchain must be a solution that addresses privacy and security issues in the digital era."

The appetite of Ant Financial – the fintech arm of Alibaba Group – is clearly sketched by the words of the co-founder and former chairman of the entire enterprise.

This largest fintech firm in the world started its bet on blockchain in 2016, attaching hefty importance to this emerging technology, considering it as one of the five key 'BASIC' elements in the fintech industry, along with AI, Security, IoT and Cloud Computing.

Blockchain technology harmonizes well with the business spread of Alibaba. Digital trust and security are key supports that Alibaba needs to provide, affecting interests from the e-commerce business of its main body to the financial services of the tech-driven fintech affiliate. The intention of Ant Financial to make moves in blockchain is therefore straightforward. 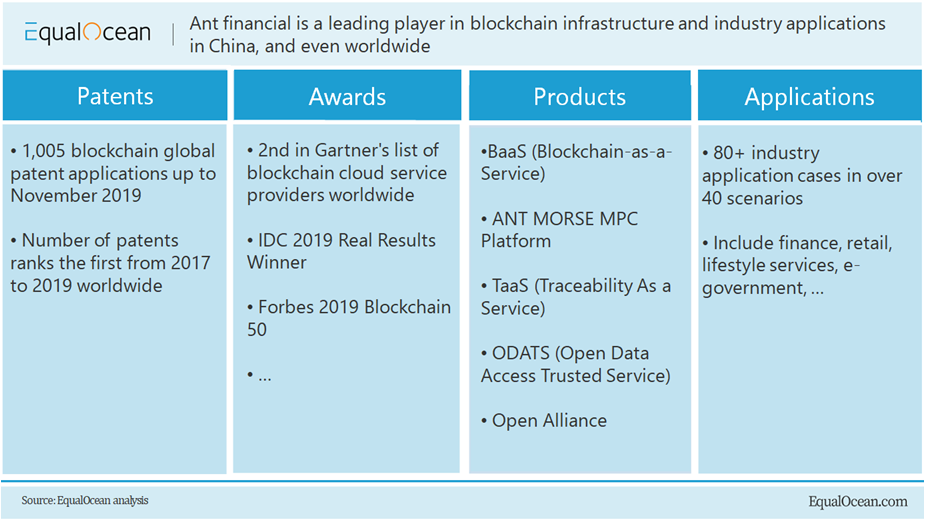 The way that Ant Financial approaches blockchain to a large extent follows the typical practice of large firms on emerging technology -- more or less, we see Tencent, JD Digits and Huawei are stepping into this battlefield in a similar way. The team targets architectures and real-world application scenarios simultaneously, both of which complement each other.

Up to November 2019, Ant Financial had applied for 1,005 blockchain patents worldwide, which ranked the company first globally for three consecutive years from 2017 to 2019. The company had provided blockchain solutions to more than 80 real-world application cases in over 40 scenarios like finance, retail, public welfare and e-government, to name a few.

Coming up to February 2020, Ant Financial has launched five blockchain products centered on its Blockchain-as-a-Service platform, all of which fall into the category of an alliance chain, with emphasis on developing blockchain infrastructures that are able to connect through trustworthy processes in practical scenarios.

Currently, the commercialization capability of enterprise-level blockchain solutions are tightly bound to the level of speed and security that they are able to achieve, as well as the prices they charge, where the ecosystem that Ant Financial builds with its product mix tends to have leading performance in all three aspects.

Ant Blockchain Blockchain-as-a-Service is a fundamental enterprise-level blockchain solution that allows clients to create and manage their private blockchains. Simply put, it directly deploys blockchain technology on the cloud service platform of Alibaba and Ant Financial.

It can be seen as an open collaboration platform with enhanced functions that specifically target real-world scenarios that require a high level of trust and data security among the parties, for example, cross-border remittances, supply chain financing, trusted evidence preservation, etc. 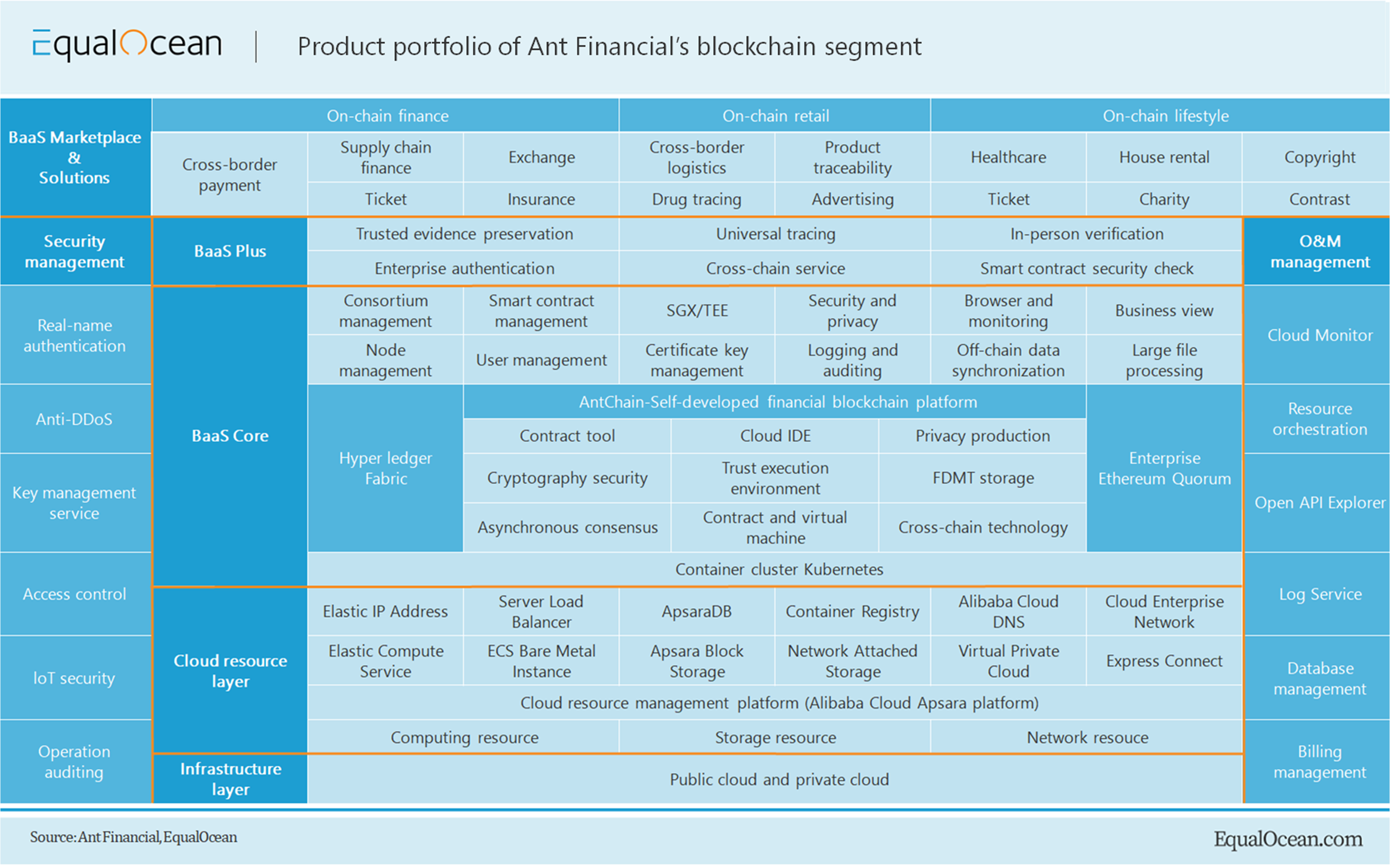 The technical architecture of the BaaS platform consists of three layers:

The bottom layer is BaaS Core, which serves to enable cross-platform operation and deployment based on cloud resource management platforms that provide flexible support for hosts and containers.

The second layer is BaaS Plus, which encapsulates the bottom-layer services and capabilities and makes them standardized interfaces for specific application scenarios like trusted evidence preservation, general-purpose tracing and in-person authentication. This reduces customers' investment in infrastructure and the time needed for service connection.

The top layer is BaaS Marketplace and solutions, where partners of Ant Financial can provide their own capabilities on the Marketplace, which allows users to reference others' platform capabilities in similar scenarios and apply them in their own applications.

As the main body of the blockchain ecosystem of Ant Financial, the BaaS platform has a solid infrastructure that able to support 1 billion daily transactions and can achieve 100,000 cross-chain information processing capabilities per second (PPS).

BaaS, what links between blockchain architecture with the enterprise-level applications, is a trend in China's blockchain industry at present. Apart from Alibaba Group, other tech giants like Tencent, JD Digits, Huawei are also intending to take a share in the market, plus several emerging blockchain-focused startups, like Hyperchain and 9BaaS.

Ant MORSE Multiple-Party Computation (MPC) platform can possibly be thought of as a security-enhanced 'plug-in' among the different parties that collaborates through the Ant Blockchain BaaS platform. Basically, it is a data collaboration infrastructure that helps to data sharing and digitalization in scenarios – like joint marketing, joint risk control and joint scientific research – that cause mutual parties serious security concerns.

Its MPC technology, with over 40 patents, is able to secure computation in a local box, which ensures all data cooperative parties can share data while keeping their original data private, i.e., the data can be utilized without exposure.

Compared to many other applications of blockchain technology, traceability is somewhat 'old fashioned.' However, the number of teams that have international deployment capabilities and can realize a Transactions Per Second (TPS) level that could support real-world scenarios is rather limited – the Ant Blockchain TaaS platform may be one of the superior candidates.

The above two dimensions are the central aspects to measure whether a TaaS platform is practical.

It is straightforward that the function of traceability tends to be more significant for goods with high value where origin and safekeeping are key.

At present, a sad story in China is that such goods often come from overseas, adding a premium for shipping and arguably contributing to environmental wastefulness – for example, bluefin tuna is sent from Japan, infant formula from the Netherlands or a pair of limit edition shoes from a designer brand in France. This often has to do with suspicions on the part of consumers about domestic products, rather than a lack of quality alternatives.

Even e-commerce giants like Alibaba have a hard time giving these product endorsements to sensitive consumers based on its reputation alone. However, the enterprise has the ability to achieve this with its blockchain approach, where the team has hit breakthroughs in the technological challenges of communication delays and network imbalances caused by the rather limited nodes overseas.

On the other hand, the level of TPS is probably the most direct way of evaluating the performance of a blockchain traceability solution. According to Ant Financial, its consensus algorithm can achieve over 25,000 TPS, while the 1,000 level is a common bottleneck among global players.

This is an important step that Ant Financial is taking in completing its products and solution systems in blockchain, as currently, the limitation of single isolated chains has started to appear, while the cross-chain technology is believed to be fundamental for building a mutually trusted ecosystem in the future.

Ant Blockchain Open Alliance is a low-cost, low-entry barrier alliance chain product specifically designed for SME developers, which was released together with its ODATS.

Just as happened with the Internet in the 1990s, affordability is restricting the development and spread of blockchain technology. At present, the annual fee per accounting node in a BaaS platform on average is about CNY 20,000 – 30,000. In this case, it takes more than CNY 100,000 annually for a small-scaled alliance chain to run (3-5 nodes, plus the labor and developing expenses), which keeps most SMEs out of the race.

By launching the Open Alliance, Ant Financial is establishing a public environment for enterprise-level blockchain, which in the long term will facilitate maximize utilization of resources and lower down the costs – a similar idea as QR code payments.

Looking back to the four-year development of Ant Financial on blockchain from 2016 to 2019, its core logic of building up an open and inclusive enterprise-level blockchain ecosystem could be clearly observed. In doing so, the fintech unicorn focused its attention on infrastructure and real-world applications, accounting for deployment and capability in the former and practical use and fitness for the latter.

Although Ant Financial is approaching the three simultaneously, we can see its emphasis has gradually turned from exploring single industry applications, constructing infrastructures, to building up an ecosystem.

Blockchain is more or less a battlefield that Alibaba Group must enter. Standing on the shoulders of the entire empire, its blockchain team may efficiently collaborate with other business units and leverage the strong 'To Business' capabilities that define a big chunk of the company’s success – this includes the client pool, local promotion ability and service capacity.

On the other hand, the development and achievement that the blockchain segment of Ant Financial could bring would then enhance the technology profile of the entire Alibaba ecosystem, helping the Chinese Internet juggernaut to stand at the cutting edge of innovation, recalling that classic principle of Matthew effect...