Bestore, Three Squirrels and Be & Cherry are touted as the ‘BAT’ (Baidu, Alibaba, Tencent) of China’s healthy snack industry. However, the online sales spree is making for polarizing strategies among industry players. 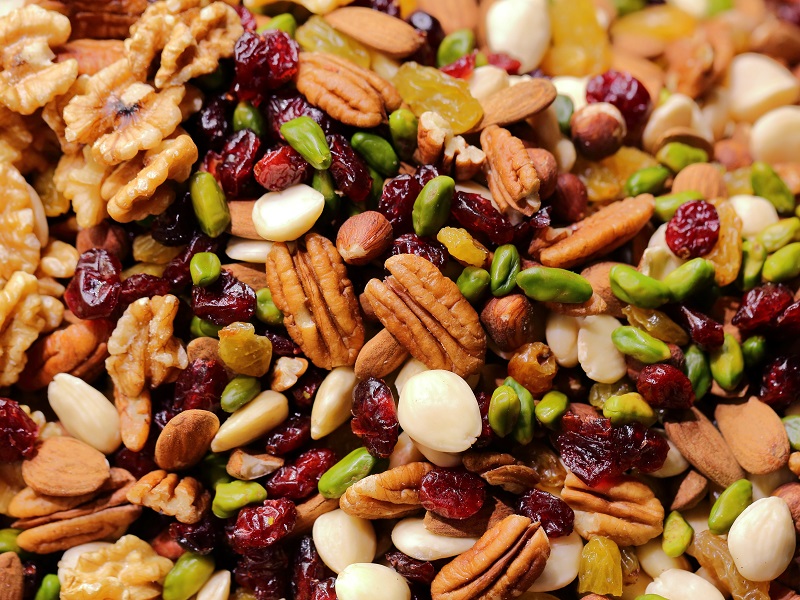 On February 24, 2019, China’s famous healthy snack brand Bestore (603719:SH) made its initial public offering (IPO) on China’s main board. Due to the coronavirus outbreak, the Wuhan-based Bestore is also the first company ever to hold an online IPO ceremony. The stock was priced at CNY 11.9 per share, aiming for a total offering of CNY 488 million. By the time of this writing, Bestore’s stock price has risen by the daily limit for a third successive session to CNY 25.09, pushing its market cap to CNY 10.1 billion.

After Bestore’s IPO, observers said the concentration rate would be significantly improved in the previously low-threshold and scattered market. Since the so-called tripartite in the healthy snacks’ e-commerce arena (Three Squirrels, Bestore and Be & Cherry) will maintain their expansion speed, accelerate omni-channel integration and develop for the high-end market, stirring a new round of competition.

EqualOcean has introduced Bestore and its competitors before. Therefore, this article will dig into the company from a financial angle, trying to unveil the direction of development strategies of Bestore and its counterparts.

In general, China’s rapid economic development and the increase in the disposable income of residents have brought changes to people’s consumption concepts and habits in recent decades. The demand for basic needs has transferred to the desire of personalization, diversification and entertainment. According to Euromonitor, China’s healthy snack sector reached CNY 344 billion with a 10-year compounded annual growth rate (CAGR) of 6.7%; it is expected to reach CNY 442.36 billion in 2023. Right before Bestore’s IPO, PepsiCo announced plans to buy Be &Cherry for USD 705 million, also showing the promising forecast from the capital market.

In the first three quarters of 2019, Bestore ranked second after Three Squirrels in both revenue and increase rate. (Please be noted, in the graph below, Haoxiangni is the listed company that owned Be &Cherry before PepsiCo. acquired it.) 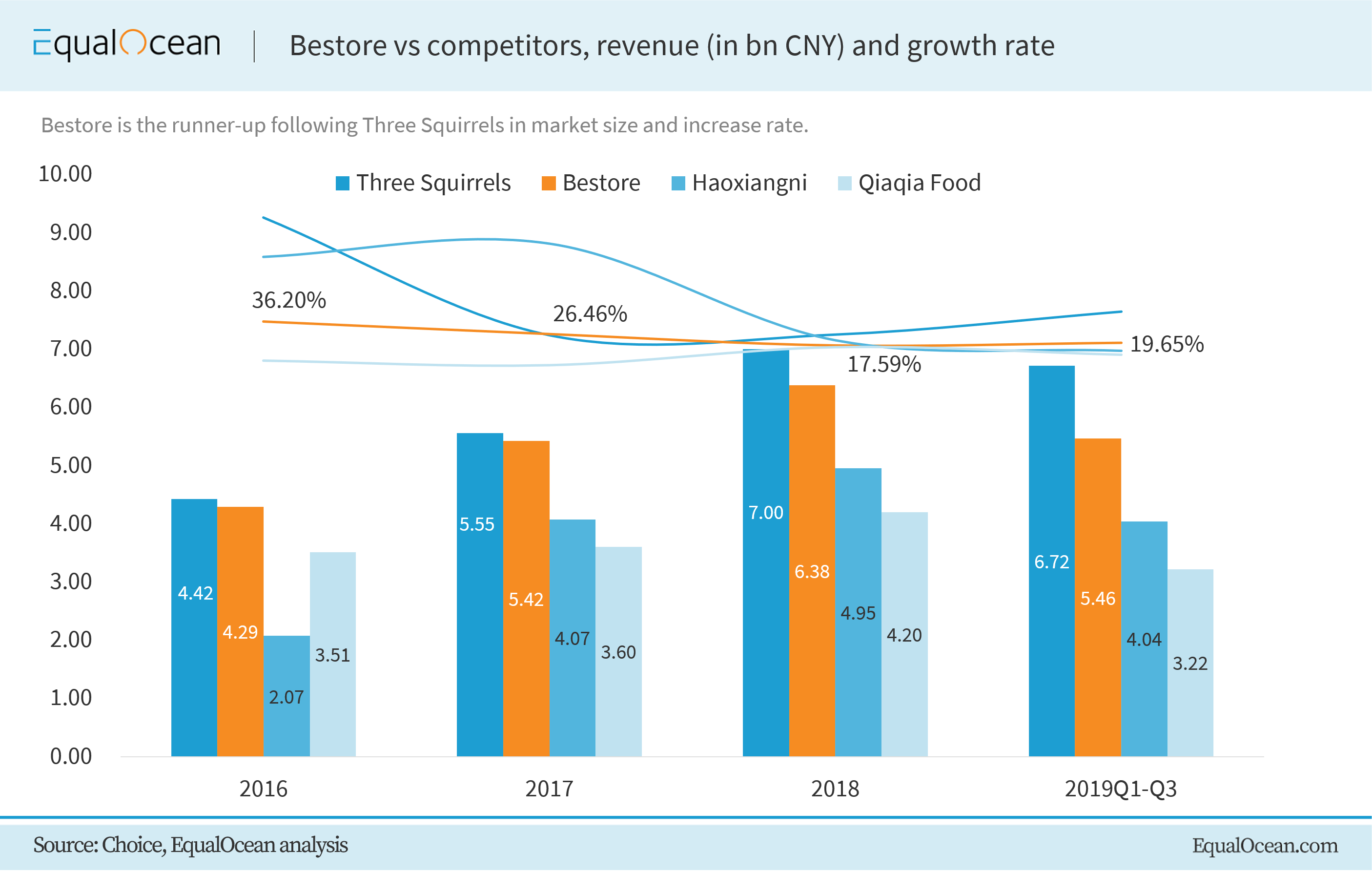 As for the gross profit margin, Bestore’s performance has been steady. Besides the abnormal volatility in 2017, which is due to the company’s equity incentive for Bestore e-commerce department, the gross margin remained around 32% in the other years. In the first three quarters of 2019, the gross margin was reported at 32.5%, slightly higher than that of 2018.

Compared with other players in the industry, Bestore is at the median level. Laiyifen (603777: SH), Yanjin Shop (002847: SZ) and Qiaqia Food (002557: SZ), have a gross margin of 44.42%, 39.13% and 33.36%, respectively. However, Laiyifen and Qiaqia Food are mainly focused on offline self-operated stores, while Yanjin Shop has its own snack production line. These three are different from Bestore’s model. So, in the graph below, we only focus on Qiaqia Food which just announced its online business plan for comparison. In this case, when examining Three Squirrels and Haoxiangni, whose business model (click to check the online-offline sales of the three) resembles Bestore’s, the latter has more advantages over the first two. 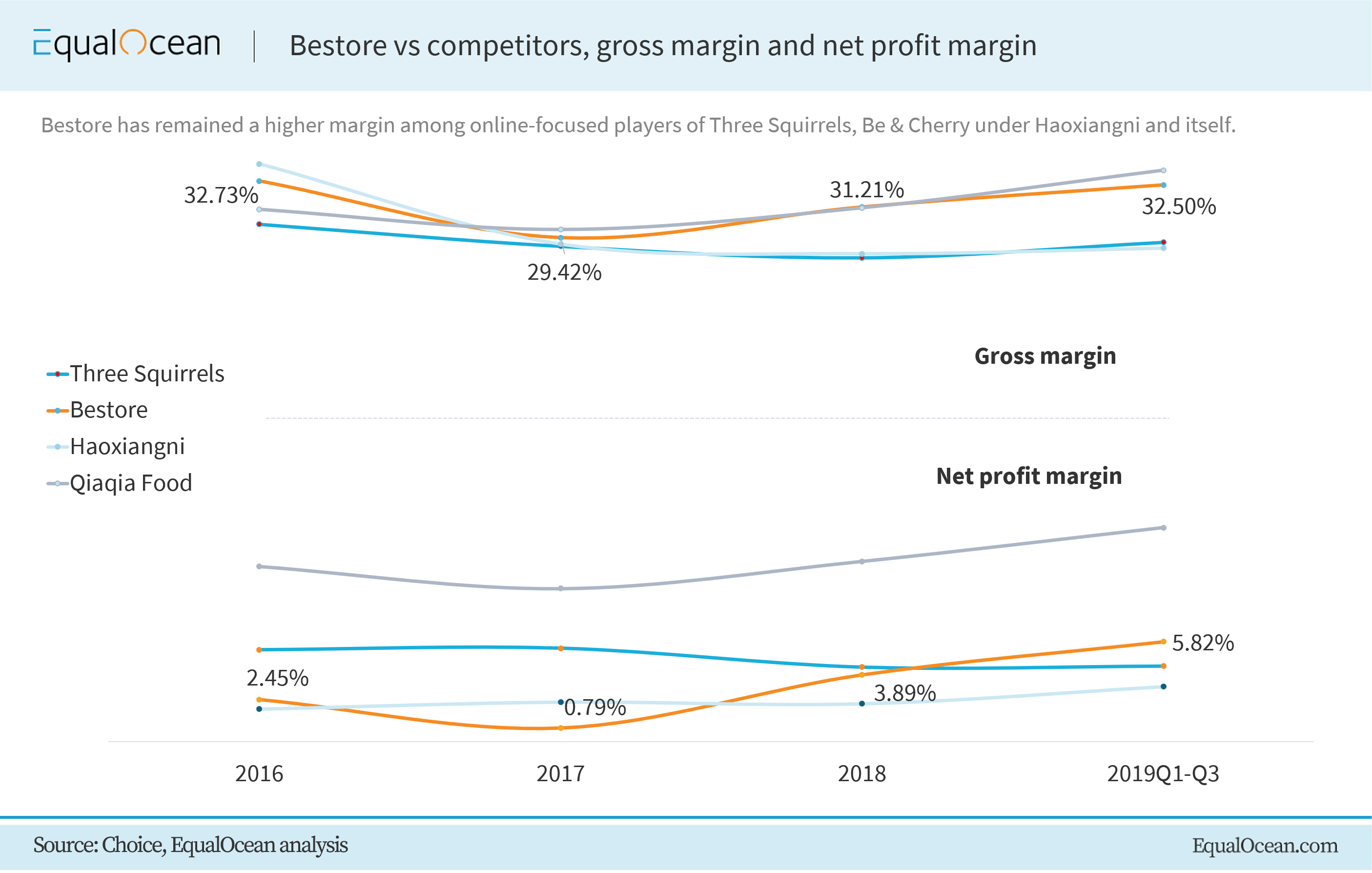 The difference in revenue and gross margin disclosed the companies’ different strategies.

For Three Squirrels, the scale is still the most important goal at this stage. The concentration rate of the top 10 (CR10) players in China’s healthy snack sector is around 30%, while in the United States, the CR10 is twice as much. That’s why the company believes that there are abundant opportunities for brand merchants in this sector, considering most of the players are small and medium enterprises with employees that can be counted by fingers. After Three Squirrels went public in December 2019 with a market cap exceeding CNY 10 billion, Zhang Liaoyuan, the CEO of the company, announced a goal of “reaching CNY 100 billion in revenue within 10 years.” Therefore, in the mid-term, the company will keep focusing on business expansion and put profitability in a less critical position (which explains Three Squirrels’ rapid revenue growth and low gross margin). It aims to leverage the advantages brought by scale to achieve an efficient connection from offline manufacturers to consumers.

Compared to Three Squirrels, which relies heavily on online income, Bestore relies on a more balanced online-offline structure. However, as online sales grow faster than offline, Bestore’s revenue growth rate is slightly lower than that of the Three Squirrels.

Originating from brick-and-mortar stores, Bestore understands more about the value generated from offline channels and the supply chain. In terms of strategic layout, Bestore benefits from its more reliable supply management capability, resulting in a stable increase in net income and margin. Meanwhile, the company’s offline genes and investment in digitalization will bring out cross-channel advantages. But it is worth noting that Bestore’s offline store layout is concentrated in central China. Hubei Province alone has around 40% of stores, leaving other areas in a relatively weak situation. In order to expand outwards, the company implements a strategy of ‘opening big new stores and closing small old stores’ and ‘transform to more CBD stores.’ Under this strategy, many previously self-operated stores with higher gross margins were replaced by franchise stores with lower margins, slightly affecting the gross margin of the company. 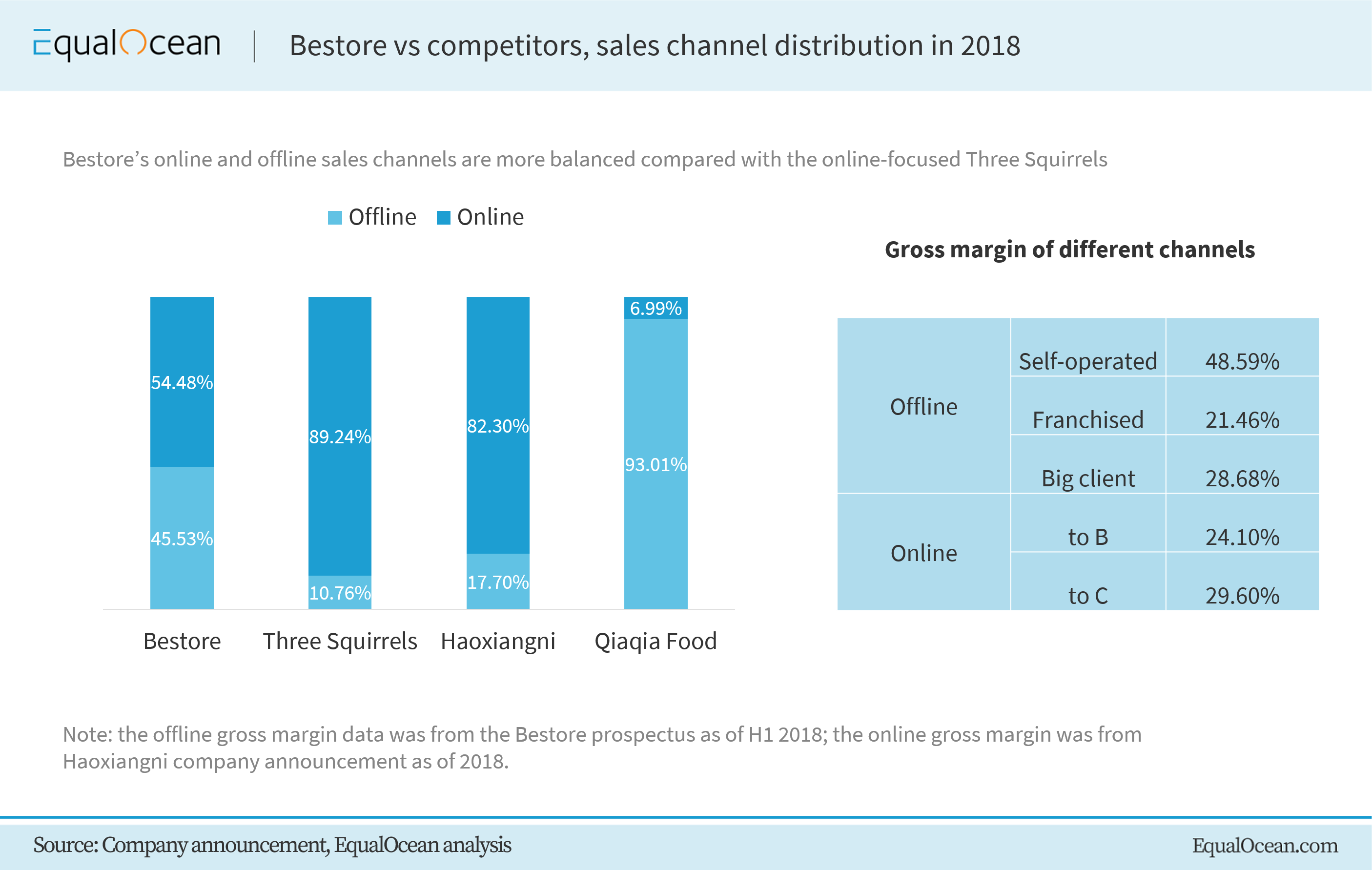 In online B2B, Bestore currently has dozens of e-commerce sales channels, including Tmall, JD.com and Vipshop. In online B2C, Tmall and JD.com flagship stores dominate this business. In 2019H1, the company’s online sales reached CNY 1.57 billion, of which CNY 1.14 billion was generated from the B2C model and CNY 424 million from the B2B model.

As for offline channels, Bestore opened a total of 2,237 stores in Hubei, Jiangxi, Hunan, Sichuan and other regions in China as of June 30, 2019, including 747 self-operated stores and 1,490 franchised stores. The offline sales reported CNY 1.901 billion, of which CNY 724 million stemmed from self-operated stores (38% of offline revenue) and CNY 1.14 billion from franchise models (60% of offline revenue).

Looking back to the graph of net margin, Bestore is currently in a relatively good state. The company’s net profit in 2018 stood at 3.89% and rose to 5.82% in the first three quarters of 2019; both sets of data are better than that of 2016, which is different from the performance of gross profit margin. That may be due to Bestore’s reasonable investment in period expenses and the result of scale effects. 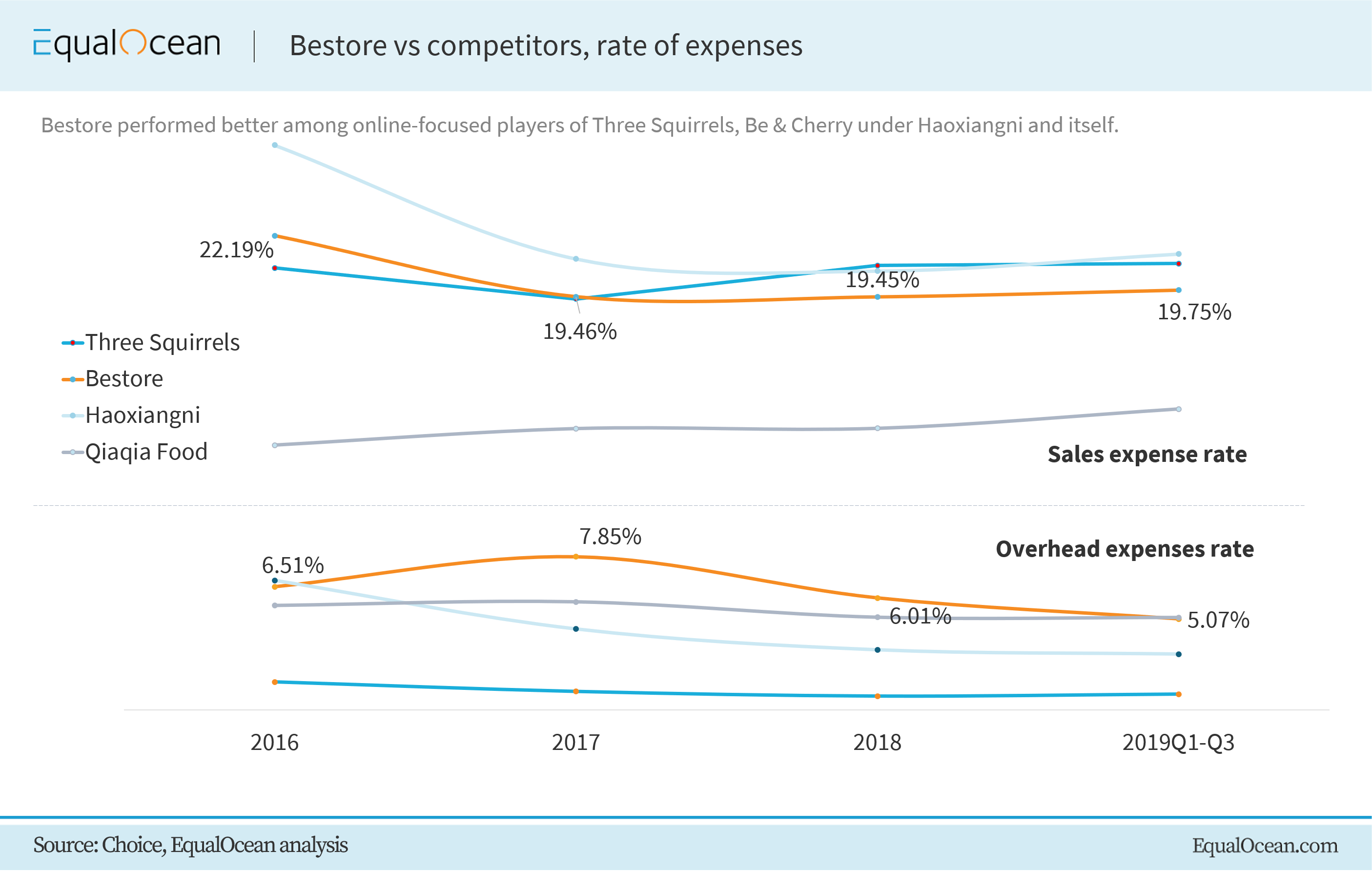 The homogeneity of products is a common problem faced by China’s healthy snack players. Companies tend to adopt the full-category strategy without exception. The main products include meat snacks, roasted nuts, sweets and pastries, dried fruits, vegetarian cherries and others. However, by scanning the product structure, we can still see the differences in strategy. 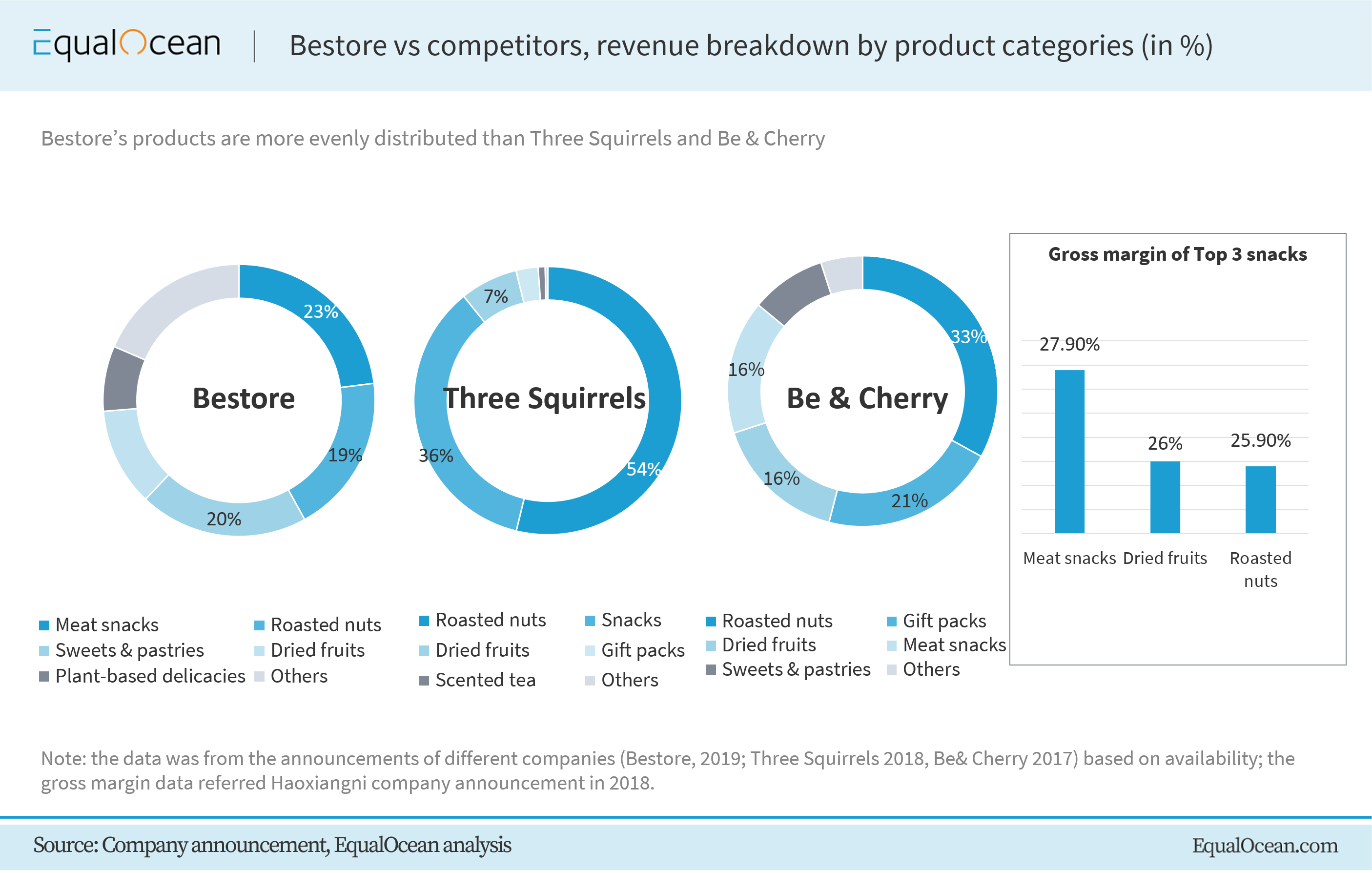 Compared with other players in the industry, Bestore is more balanced in terms of product structure. The three pillars of the company’s revenue are meat snacks, roasted nuts and sweets & pastries, each of which accounted for about 20% in revenue as of 2018. For Three Squirrels and Be & Cherry, roasted nuts (the most robust and fast-growing product category) represented over 50% and 30% of revenue, respectively.

From the perspective of growth rate, roasted nuts are above all other products. But from the standpoint of gross margins, meat snacks are the highest among the top three best-selling categories. The weight of Bestore’s meat snacks is higher than other competitors, which also shows its focus on high-end snack strategies. Since meat snacks belong to the ‘high-end’ category of snack foods, especially pork, beef, and fish snacks, the average price is high in the industry, and meat snacks are sold more in high-income areas.

What are the risks?

The online trio dominating China’s healthy snack sector will be strengthened after the three have all gone public.

However, all of them have been criticized for their outsourcing model that largely relies on original equipment manufacturer (OEM) and e-commerce platform marketing. They lose control of both upstream and downstream, which not only puts the company at significant risk in quality control but also became more dependent on those e-commerce platforms.

Besides the risks mentioned above, we still hold a positive view of China’s healthy snack industry due to the current low market penetration and an undergoing consumption upgrade of Chinese consumers. Nevertheless, the new round of competition will be more tech driven. Whether a company understands its customers well (based on massive user data), provides them with qualitative and personalized products and reacts promptly from the supply end to meet their needs will be the core competency test in the next stage.

Of the online trio, we believe that Bestore, which owns more offline strength, supply chain capability and invests heavily in digitalization, will show more growth potential in the future.

CONTACT US
Scan QR code to contact us for professional consulting services
Next article
Investment Trends in the Greater Philadelphia Area: Top 20 Startups in 2020