The founder Zhang Yiming is leaving the Chinese market, bequeathing China’s most dynamic app maker to two strategic managers who monetized the firm and hacked its growth: Zhang Lidong and Kelly Zhang Nan. 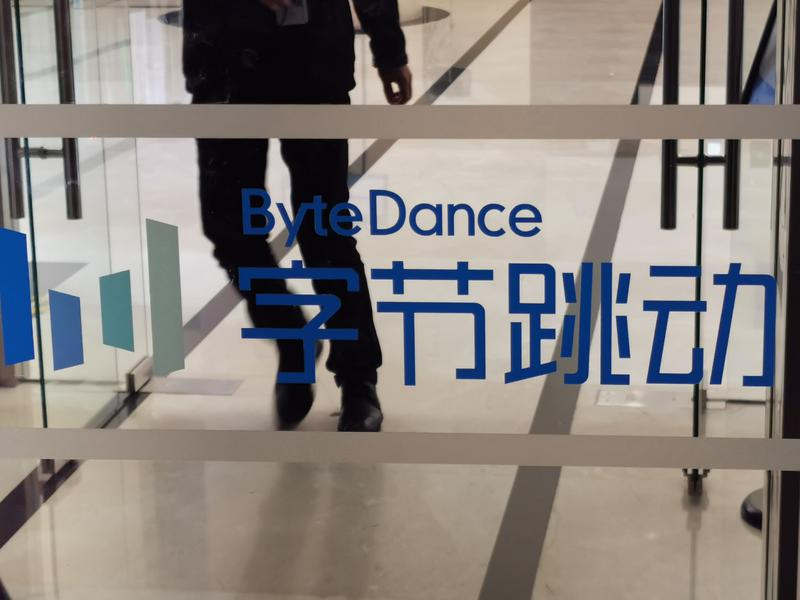 On the eighth anniversary of ByteDance, Zhang Yiming sent an internal mail announcing a major corporate structure update and saying that he will be focusing on the global markets – this move supports the realization of the ambitious globalization plans that he set at the firm's inception.

Many see ByteDance as an outstanding Chinese firm that could continue to globalize its products and achieve the universal recognition that hasn't been achieved by any other social platform from the Asian nation. It is obvious that, for Zhang, the 'success' of TikTok and other notable brands is just the beginning.

"He was never content with the extending ByteDance across the emerging world economies; he wants Europeans and North Americans,"  a founding member of ByteDance's overseas team who has previously managed major foreign markets for the firm told EqualOcean.  "He won’t stop until he conquers them"

Zhang’s latest mail showed one thing. He is finally betting all of his experience in those regions where his iconic TikTok could not manage to penetrate. Meanwhile, he is leaving his largest market in the hands of those with the greatest track record. Kelly Zhang Nan (张楠) and Zhang Lidong (张利东) are the Bytedance team members that deserve the next greatest measure of credit for attracting hundreds of millions of users and translating a heavy user data-reliant business into a flexible, cash-making machine. 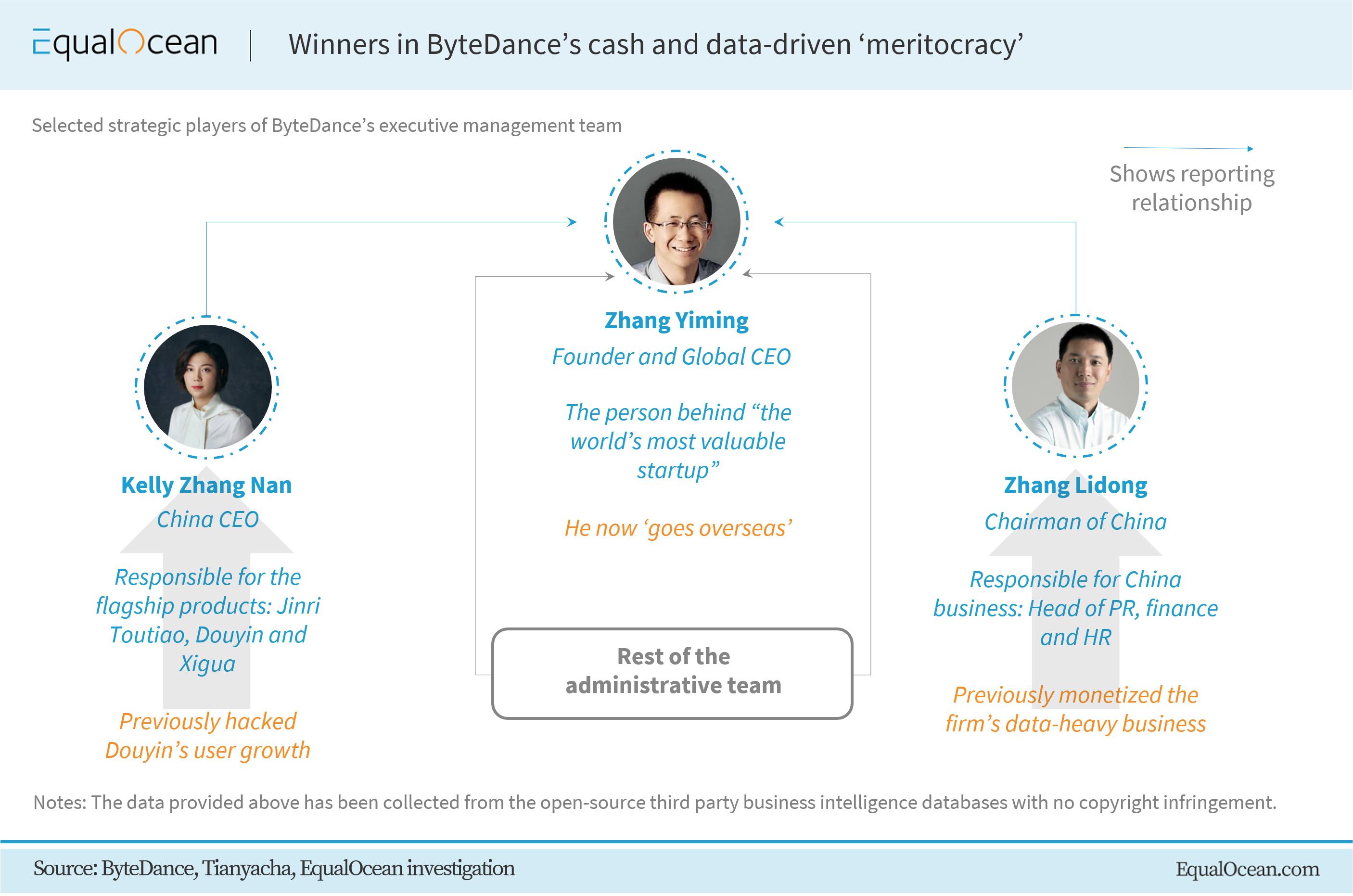 The rise and rise of the three Zhangs

The brand new China CEO, Kelly Zhang Nan, is the firm's ‘product guru.’ She is one of the creators of Douyin (抖音), TikTok's domestic version and ByteDance's flagship product, and she was there when Huoshan (火山)  – a social short-video platform that was designed to strike at Tencent (0700: HKEX) backed Kuaishou (快手) – was rising. After achieving exponential user growth with Douyin, she had also managed to keep Douyin's user growth while Xigua (西瓜) was positioning in the market in 2018, another short video product of the firm.

Kelly Zhang Nan has transformed the way Chinese users absorb information, from texts to short videos, and taught them how to express themselves through the lens of smartphones. She was not only a simple product manager but a social engineer in the world's most populous country.

She was lucky enough to be promoted as the head of Douyin while the short video market was booming in China and smart enough to seize the chance.

Zhang Lidong, the firm's former head of monetization, was not cultivated in the country's burgeoning IT industry, unlike most of the executive members of ByteDance. He used to work in traditional media as a reporter and was invited to ByteDance by Zhang Yiming in 2013 as a partner and Senior Vice President. His main task and paramount Key Performance Index (KPI) was to monetize Jinri Toutiao (今日头条), ByteDance's news aggregator.

In those years, ‘Jinri Toutiao’ and ‘ByteDance’ (字节跳动) were terms used interchangeably by the Chinese netizens. It was ByteDance's largest and only significant product. 2013 was also the year when China's mobile internet users began to surpass desktop ones. Yet this obvious revolution was not seen by some other players. The names of those who watched this shift and failed to react on time were mostly deleted from the Chinese search engines later on, including Sina News (SINA: NASDAQ) which later on compensated for its loss with a Twitter-like product, Weibo (微博).

Jinri Toutiao was an interesting news product. It collected news from a plethora of sources and recommended the stories to users based on their previous searches and interests. This mechanism, ingenious at the time, accumulated an impressive user base of around 50 million in only a couple years after its launch. It was also a costly operation to purchase all the intellectual property and media copyright rights to those news sources. Accumulating users was one thing, monetizing was another story.

The company was amongst the first to integrate ads targeting different user groups, in a move to craft a lucrative advertising-driven business. In 2016, the news aggregator achieved annual revenue of around CNY 10 billion (an equivalent of around USD 1.4 billion). It was USD 2.2 billion for Twitter's advertisement revenues that year.

At a regular Chinese internet company, stability is often key.  From the line manager to the employees, stability and loyalty count massively in performance evaluations. Stability is, of course, a kiss of death when it comes to a product's user growth performance. In the Chinese IT industry, investors, analysts, and entrepreneurs must see exponential growth – or at least solid growth – to give a piece of positive judgment.

Chen Lin (陈林), for instance, one of the earliest founding members of the firm, joined ByteDance as a product manager in 2012 and was promoted to be the CEO of Jinri Toutiao in 2018. Although it is the market leader, Jinri Toutiao's monthly active users (MAU) have been hanging around the 300 million mark since the beginning of 2018, while the company's short video products had already grown multiple times over.

This ‘stable’ performance apparently was not welcomed. Technically, Chen Lin still holds the same authority as the Jinri Toutiao CEO and supposed to report to Zhang Yiming, yet it is a question as to who now will actually be reporting to who, as the China CEO is now Kelly Zhang Nan.

Human resources management is part of the ByteDance story – it is one of the strongest weapons of the company. Thanks to its thorough HR practices and competent hiring managers, the firm has made a difference in global markets, with TikTok crushing its overseas competitor Kwai. It will broadly be supervised by Zhang Lidong after the strategic update.

ByteDance has been seeking a Global CEO, one who can understand the west, the east, user data, and government relationships – so far they have failed to find one, so Zhang Yiming took up the responsibility.

When Facebook and Twitter first went viral in the emerging markets and in the new territories, user acquisition costs were rock bottom and there was a clear need in the market. One didn’t have to invest much in user growth. There was no need to contemplate on local regulations as the legal systems weren’t sophisticated enough to respond. Things have since changed.

ByteDance will have to do even better if Zhang Yiming is to realize his initial mission. Until he makes ByteDance a truly global company, he may defer going to the public.

The costs of late globalization are getting higher and higher every day. Time is not Zhang Yiming’s friend in this quest, and he knows it well.