Tech giants are seeing the epidemic as a window of opportunity to explore the ever-growing education industry in China.

Zhang Yiming, the founder of the world’s most valued unicorn, ByteDance, has expressed his intention to consider and plan new strategic directions towards education in a letter released on the eighth anniversary of the company.

“The online tutoring market has been very hot recently, and many people ask about my company's business progress. In fact, I am not anxious and have patience. I think it is still very early. The education business must have more fundamental innovations, of course, provided we have a deeper understanding. Especially for a company that already has a successful business, starting a new business is not easy. Bold attempts in new fields are an important sign of always starting a business.” Zhang said.

CEO of one of ByteDance’s flagship product, JinriTuotiao, had similar views regarding venturing into education. He believes that in addition to recruiting the best teachers, the firm also needs to make breakthroughs in products, technologies and the combination of software and hardware.

“ByteDance’s education business is still recruiting people, and we expect that the number of employees of the business exceeds 10,000 this year,” Chen mentioned.

In fact, as early as 2018, ByteDance was actively showing ambitions of stepping into the education industry. 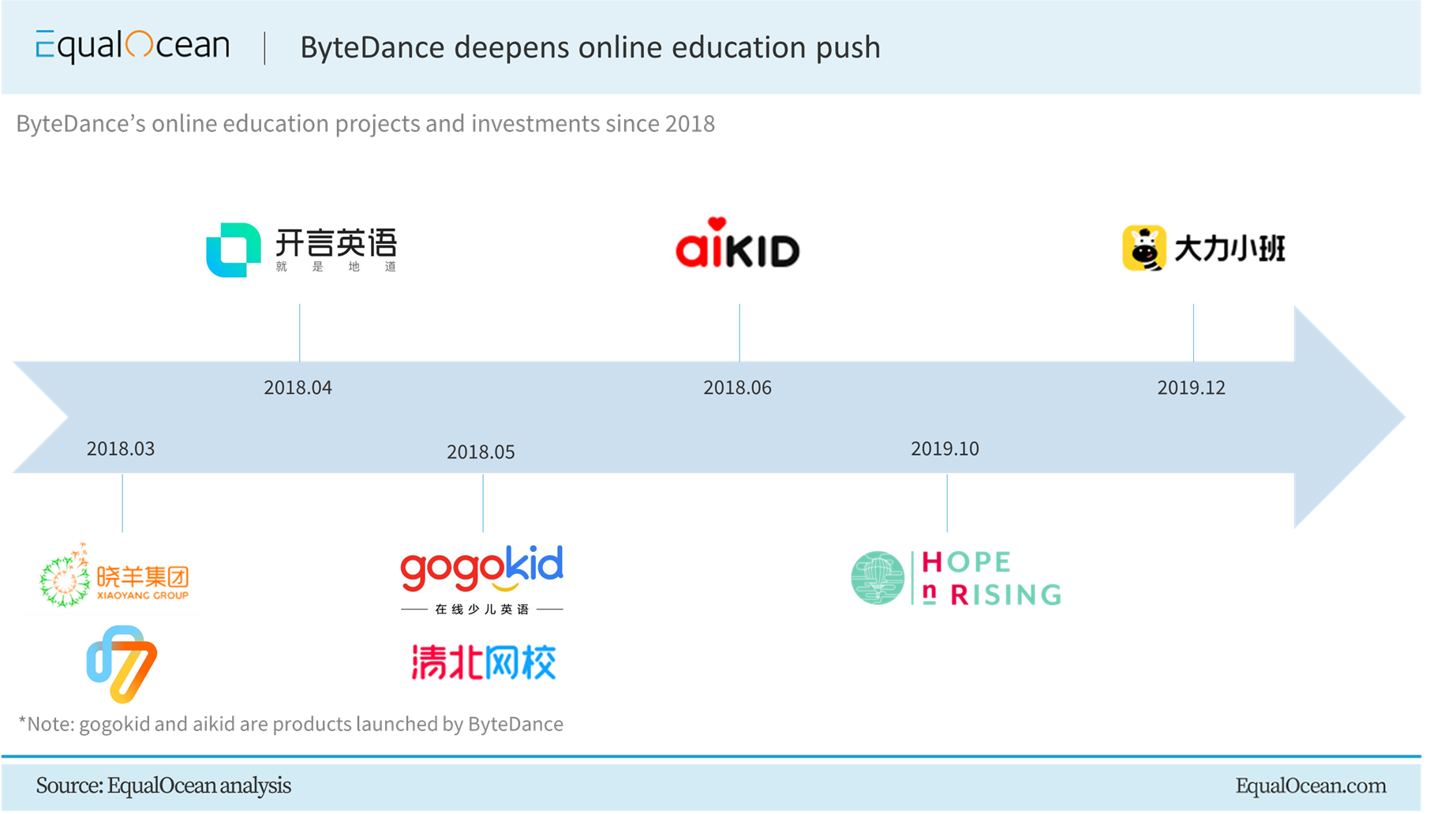 Then in 2019, Bytedance formed an online education platform for kindergarten, primary, and high school students, according to 36Kr. The platform planned to hire former employees of major educational training sites such as Xueersi and Yuanfudao.

In November 2019, ByteDance took part in a strategic investment round of ‘Hope n Rising’ (新升力), a children's education products and content provider, making the TikTok creator its third-largest shareholder.

ByteDance also announced last year that it is set to release a 24-hour artificial intelligence teacher for K12 students in China by early 2020. The latest AI teacher project is being led by Yang Luyu (阳陆育), who is also the co-founder of Musical.ly. The project team is working together with the former tech staff of Smartisan. In January, ByteDance acquired some patents and hired employees from Smartisan.

In addition, LatePost has also revealed that Chen Lin (陈林), who is currently responsible for the innovation business side of Bytedance, is focusing more on educational hardware. This is an indication that educational hardware is seen as a crucial element of the firm’s move to break into the industry. Overall, it may represent a breakthrough point in its hardware strategy.

As a veteran, in the internet industry, it should be easy for ByteDance to penetrate the online education market. While other companies burn millions of dollars in advertising, ByteDance has an advantage in areas such as traffic and algorithm creation. Previously ByteDance’s traffic was more entertainment-oriented and ‘fast-paced,’ whereas educational traffic has a ‘slower’ emphasis, with products that tend to associate quality and personalization.

Other than that, Zhang Yiming also announced a major corporate structure update saying that he will be focusing on the global markets – this move supports the realization of the ambitious globalization plans that he set at the firm's inception.

It is evident that the epidemic has created a window of opportunity for huge tech giants to enter the education industry but at the same time firms which are already are in the business have stepped up to prove the strength and advantages of online education. By providing free online classes, companies such as Yuanfudao, GSX Tecchedu and Zuoyebang gained millions of users.

Phyllis Zhang, head of the global market for ClassIn, one of the biggest online classroom providers told EqualOcean that, there would be two big impacts for the industry. First, the acceleration of offline institutions online and after the coronavirus, they will go back to their regular offline classes and leverage the technology for better learning and growth. The future of the education industry will be mixed with offline and online. Second, there will be an impact on the massive online dual-teacher’ classes also. The core of classes' quality still relies on teachers. When offline institutions go online in the small group class’ model, which is also the biggest strength of the offline institutions, the online dual-teachers’ classes would shift and target Tier 5 and Tier 6 cities.

Other than that, the firm is now planning to support more universities in Europe and North America to go online, as COVID-19 is now in pandemic status leading to the closure of offline schools around the world.

UNESCO recently recommended a number of applications and platforms as distance learning solutions for the pandemic. The UN organization said these products tend to have a broad reach and user base, most of which are free, and some of them support multiple languages. Among the collaboration platforms that support live video streaming, Chinese products such as Feishu (飞书), DingTalk, and Hangouts Meet from Google and Teams from Microsoft were selected.

With the sudden change due to the pandemic, the supply-demand balance has been broken, and the ‘live broadcast platform’ is one of the most famous options.

After the official announcement from the ministry of education about the closure of all offline educational institutions, more than 200 million students and 200,000 institutions launched plans of migrating from offline to online. This caused problems for online education firms, whose platforms crashed due to the sudden overflow of users.

Platforms such as TAL Live Cloud announced that it would stop its services for some time. DingTalk faced a similar problem as tens of millions of companies used video conference feature at the same time. On the first day of a free live course streamed last month by Zuoyebang – a platform where students can seek answers to homework problems, and which has over 400 million users – its server crashed when five million users came online at the same time.

Another thing ByteDance will have to keep in mind is that for how many months will the schools remain closed? March, April or May? Should the parents really go for long-term paid online courses of stick to free online classes till school resume? Can the effect of online education, be compared to offline teaching? Is the online convenience more important, than the service experience? Companies will have to be careful with the effectiveness of online education.

In the early development stages, one-on-one teaching was considered as the main method. The core is to break geographical restrictions through the Internet to connect high-quality teaching resources across regions with students. It is similar to the C2C platform model of the e-commerce industry, the model used by firms like VIPKid, Zhangmen 1on1, etc., One-on-one online education is the earliest form of development in live lessons due to lower requirements for teachers and higher standardization of products. However, due to its relatively low teacher retention and relatively short user life cycle, the cost of customer acquisition is high. In the current situation, reaching profitability for this model is difficult. In other words, one-on-one online is a good demand solution but it is not necessarily a good profit model.

On the other hand, one-to-many online classes are similar to the B2C model in e-commerce. The platform not only connects but also outputs standardized products and services, and undertakes more responsibilities of teacher training. The model is further divided into two classes with Xuersi, Yuanfudao, Zuoyebang and GSX techedu representing the dual teacher large class and New Oriental’s, DFUB representing the single teacher small class. Compared with one-on-one online, one teaching teacher can serve 20 to thousands of students at the same time. This results in the decline in the cost of teachers as a proportion of income, thereby achieving a higher gross profit margin and better profitability. 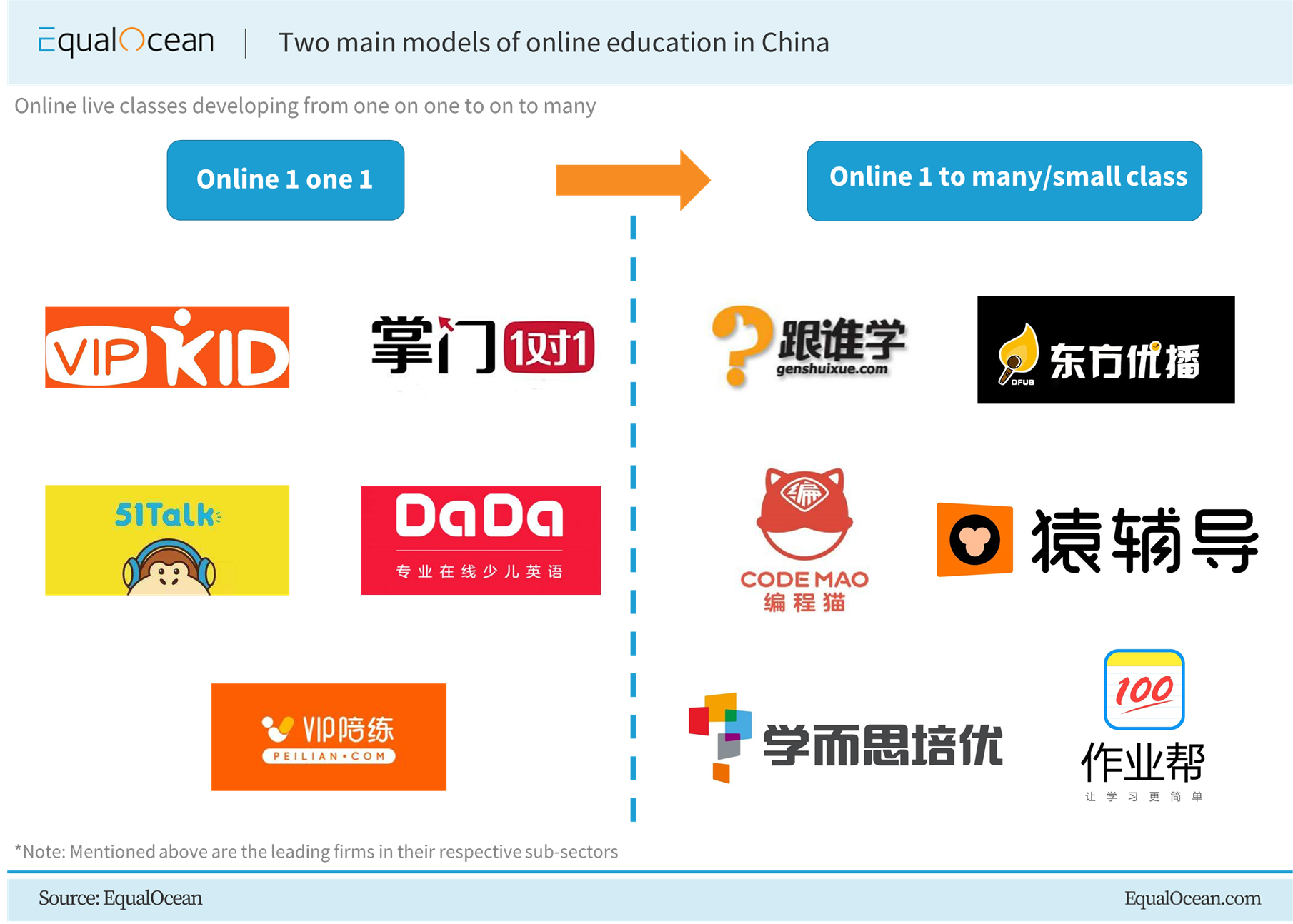