Five Moves to Expect from Xiaomi in the COVID-19 Era 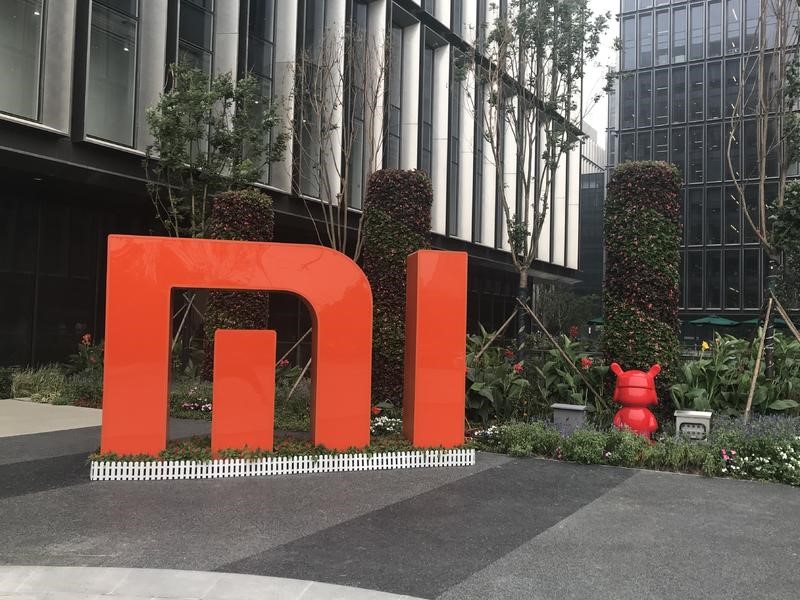 ► The disrupted supply chain and weak domestic demand hammered Xiaomi’s business in the March quarter.
► A combination of new technologies and old marketing stratagems can help the company to make it through the crisis.

A ten-year-old firm, Xiaomi Corporation (1810:HKEX) has emerged as a consumer electronics giant, making a particularly deep dent in the vast markets for electronics in the developing world, as well as in the recently stagnating advanced economies.

Needless to say, the Beijing-based firm’s entire product mix seems a good fit for both the rich that get poorer and the poor that get richer. Thus, the macroeconomic trends of the pre-pandemic decade were a particular boon for Xiaomi, as these two groups were getting bigger within that period.

Now, things will, almost certainly, change. In league with the fierce competition in the industry, deteriorating economic conditions on a global scale have already started testing the company’s resilience.

Read more about how Chinese tech enterprises are dealing with the COVID-19 outbreak in our latest report.

Some new challenges have appeared on its path to success and it will be way harder in the future to ‘build amazing products with honest prices’ without adjusting operations, marketing approach and other essential dimensions.

Below, we list five possible strategic actions Xiaomi is likely to take in the short term to mitigate systematic risks and stay competitive worldwide.

The advertising business was among the forces that drove Xiaomi’s gross profit margin up in 2019. A truly cherry-picking segment, it is also utterly fragile: as companies all over the place are cutting their marketing budgets, the ads earnings will, indeed, drop in the first half of 2020.

A rational move would be reinforcing one of the fast-growing parts of the corporation’s product mix – value-added Internet services. For instance, online gaming, the revenue from which saw a year-over-year increase of over 44% in the last quarter of 2019, is an absolute gold mine in the period of lockdown.

At the same time, as the company reported in its recent financial statement, in the December quarter of the last year, the new segments, including e-commerce, fintech, TV Internet services and overseas Internet services, jumped by more than 112% last year.

All the aforementioned four, unlike ads, are widely projected to further benefit from the pandemic, and Xiaomi might allocate more resources to them in order to excel in 2020.

Online distribution channels have been vital since the early stages of the smartphone maker’s development. Stirred by the high fixed cost of keeping physical stores, its executives’ initial reluctance to go brick-and-mortar was a primary reason for the extremely competitive pricing policy that has made Xiaomi famous. However, the bright orange outlets started appearing later on – founder Lei Jun and the team were lured by abundant opportunities in China’s burgeoning lower-tier cities.

As a result, the nascent network has boosted the total headcount to 18,170 employees, over 92% of which are based in China’s mainland, as of the last day of 2019. The company’s president Xiang Wang said in a recent interview with Bloomberg that Xiaomi currently possesses 2000-odd stores in the country. The COVID-19 outbreak, of course, badly damaged profitability in most of these selling points.

But has it passed? In the same interview, Mr. Wang mentioned that the local offline sales rebounded in April, reaching “80% to 90%” of January’s figure. Impressive, but, apparently, still far from what can be called ‘growth.’ Besides the fact that the pandemic is clearly not over, and China is not protected from new spikes of domestic cases, the country’s tech-savvy consumers will be seeking safer ways to buy devices by default – this trend is rather natural.

A more severe situation can be observed in the countries that are yet to experience a peak of the disease. In India, for example, Xiaomi went deeper into the e-commerce space, launching a home-grown service, on May 5. And the problems here are just getting started – almost half of the company’s earnings came from overseas in 2019.

In short, there is a relatively high probability of Xiaomi cutting its offline presence planetwide in 2020 in pursuit of efficiency.

With its partnership model, Xiaomi is a prime example of how to build a hardware ecosystem. But it has also been closing deals of other types. Once nurtured by private equity players, the consumer electronics juggernaut is now as active in the venture capital field as its backers back in the days.

EqualOcean has lately reported on several financing rounds undertaken by early-stage startups in the fields of microelectronics, where we saw participation from the Beijing corporation. For one, in February, Wi-Fi 6 chip developer Senscomm bagged an undisclosed amount from Xiaomi, Glory Ventures and a few state-backed funds to scale up its production.

Meanwhile, spinoffs are happening, too. Big Fish Semiconductor’s Series A in November 2019 was the first independent deal made by the successor of Pinecone, the subsidiary that designed Xiaomi’s first in-house chipset three years ago.

The need for supply chain flexibility and robustness in the upstream will drive the gadget producer’s aggressive demeanor in the private equity space. 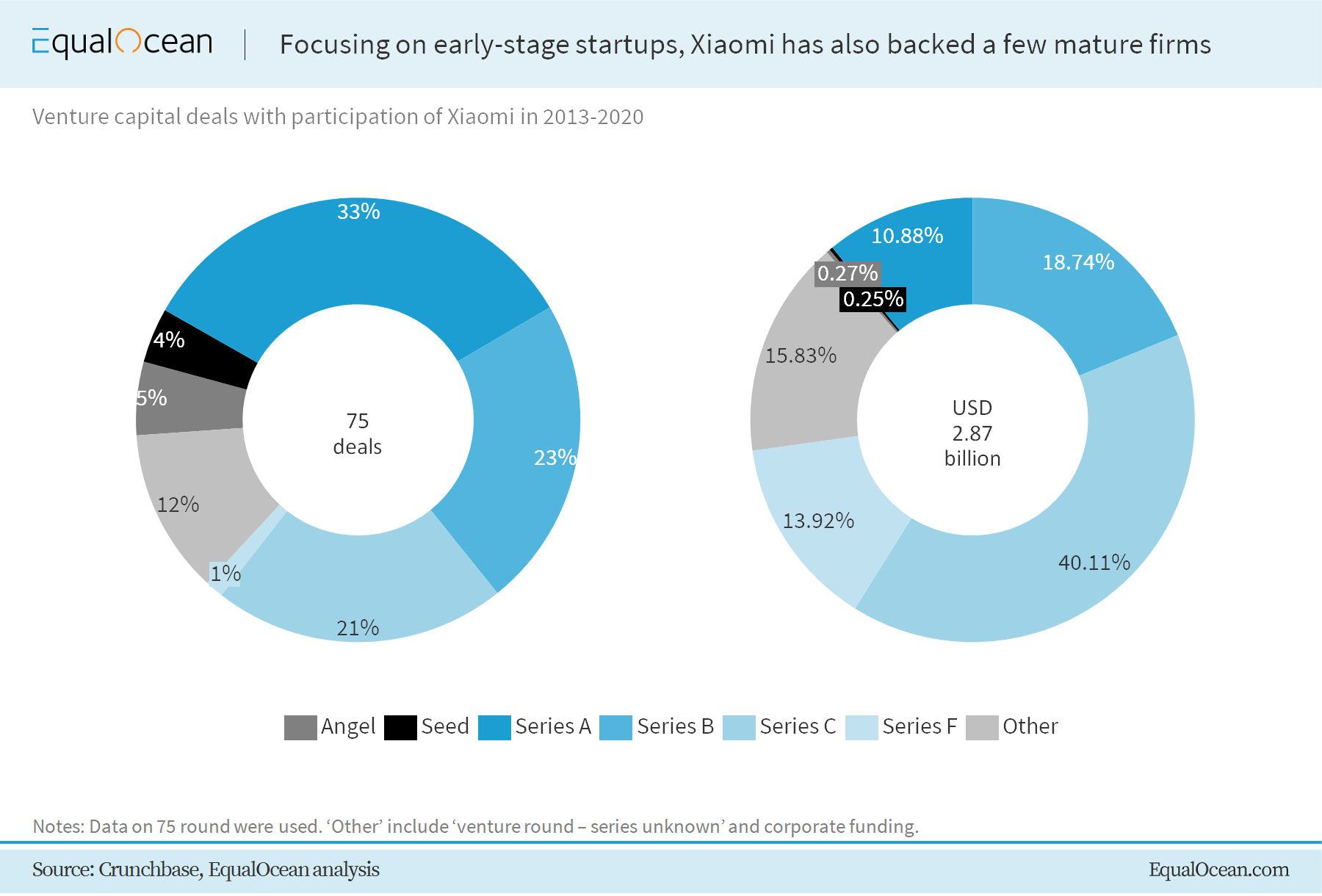 According to Crunchbase, Xiaomi has taken part in 75 funding rounds since 2014, with Series A, B and C accounting for 33%, 23% and 21% of the total number, respectively.

Xiaomi answered in November. Lei Jun said (in Chinese) during the firm’s developer conference that 2020 will see at least ten new 5G-enabled models branded with the two small letters. The first of them – Mi Mix 3 5G – was reported0 some three months later.

On many occasions, the corporation’s spokespeople have been reported1 their intentions to push the so-called ‘5G+AIoT’ strategy further: by leveraging the upcoming communication network upgrade and the mixture of machine learning and connected devices, Xiaomi has not only stepped on the technology bandwagon, but it has also tailored this plan in line with the reported2 around the ‘new infrastructure.’

Even though it is yet to be seen whether the new generation of wireless can make a real difference in the consumer electronics sector beyond augmented/virtual reality, the Asian nation’s omnipresent fuss over it may be crucial for domestic sales of the fancy handsets.

In 2018, the industry deemed Xiaomi’s proposed dual Shanghai-Hong Kong initial public offering a landmark event – the enterprise could be the first to land on both bourses at once, issuing Chinese Depositary Receipts (CDRs). After receiving the famous 84 questions from the China Securities Regulatory Commission, which raised concerns about the Beijing firm’s valuation and the ‘Internet company’ identity, it simply opted for a sole Hong Kong IPO, raising USD 4.72 billion in July that year.

Twelve months later, a new reported3 kicked off operation on the bedrock of the Shanghai exchange. Dubbed the ‘Star Market,’ the venue has since gathered a plethora of technology-focused enterprises.

Check out our latest reported4 of the emerging marketplace.

Many Xiaomi ecosystem players are either currently trading on the tech platform or making their way through the IPO pipeline. An early software project of digital savant Mr. Lei, Kingsoft Corporation’s (3888:HKEX) subsidiary Kingsoft Office (688111:SH), for instance, reported5 thereon in November 2019, obtaining CNY 4.5 billion on IPO day. Ninebot-Segway, the corporation’s key micromobility tools supplier, reported6 a prospectus in last April – it has a chance to become the first enterprise to issue CDR.

Although Xiaomi doesn’t seem to be short in cash and normally prefers other ways to raise liquidity, we believe that the Star Market’s sky-high valuations and frenzied stock debuts may attract the Chinese hardware maverick’s attention. 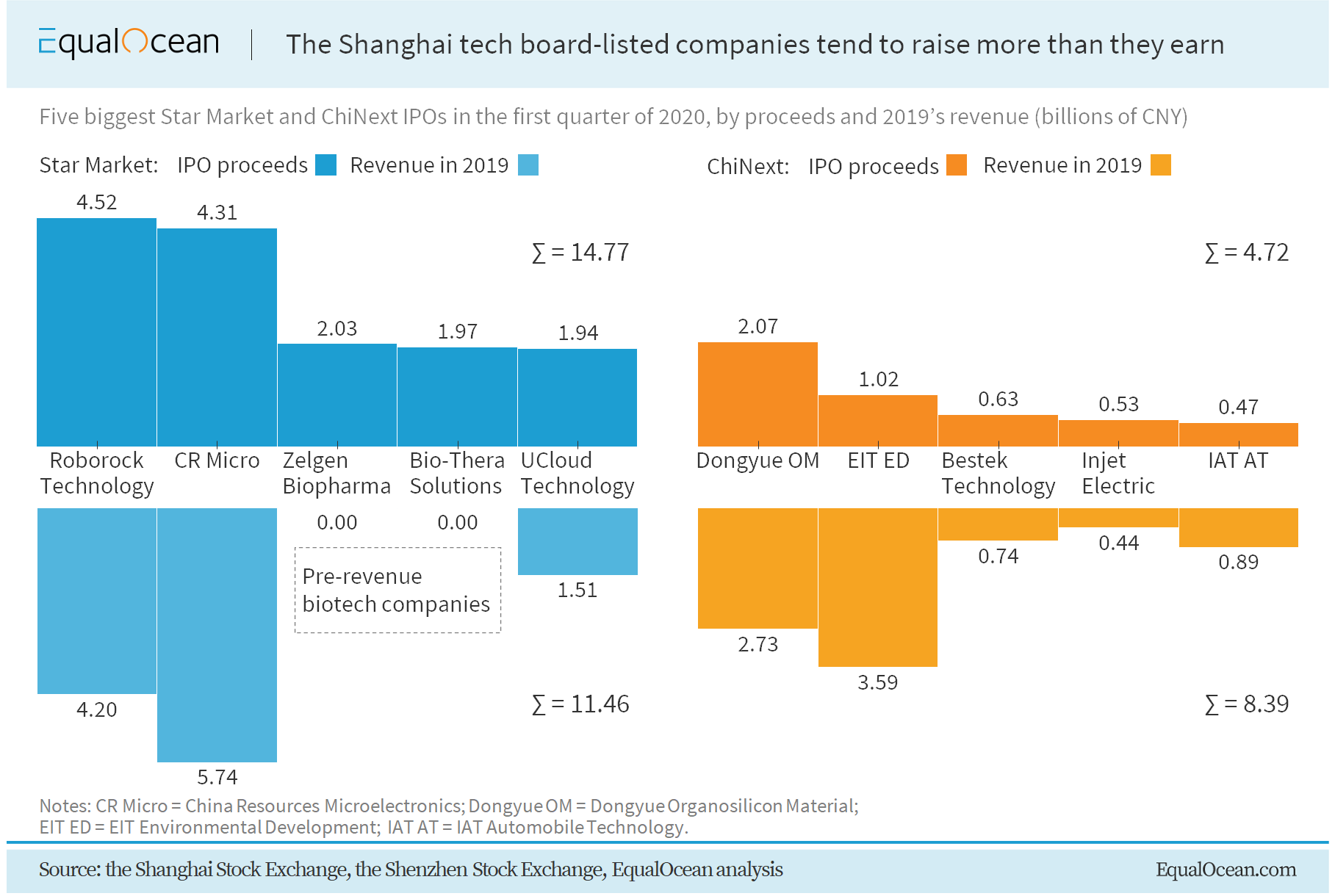