The Hidden Giant of the Fashion Industry: HLA Corporation

Few outside of China have heard of the brand HLA Home - subbranch of HLA Corporation, but the company continues to rise as one of the most profitable fashion brands globally, and internet giants are racing to cooperate with it. 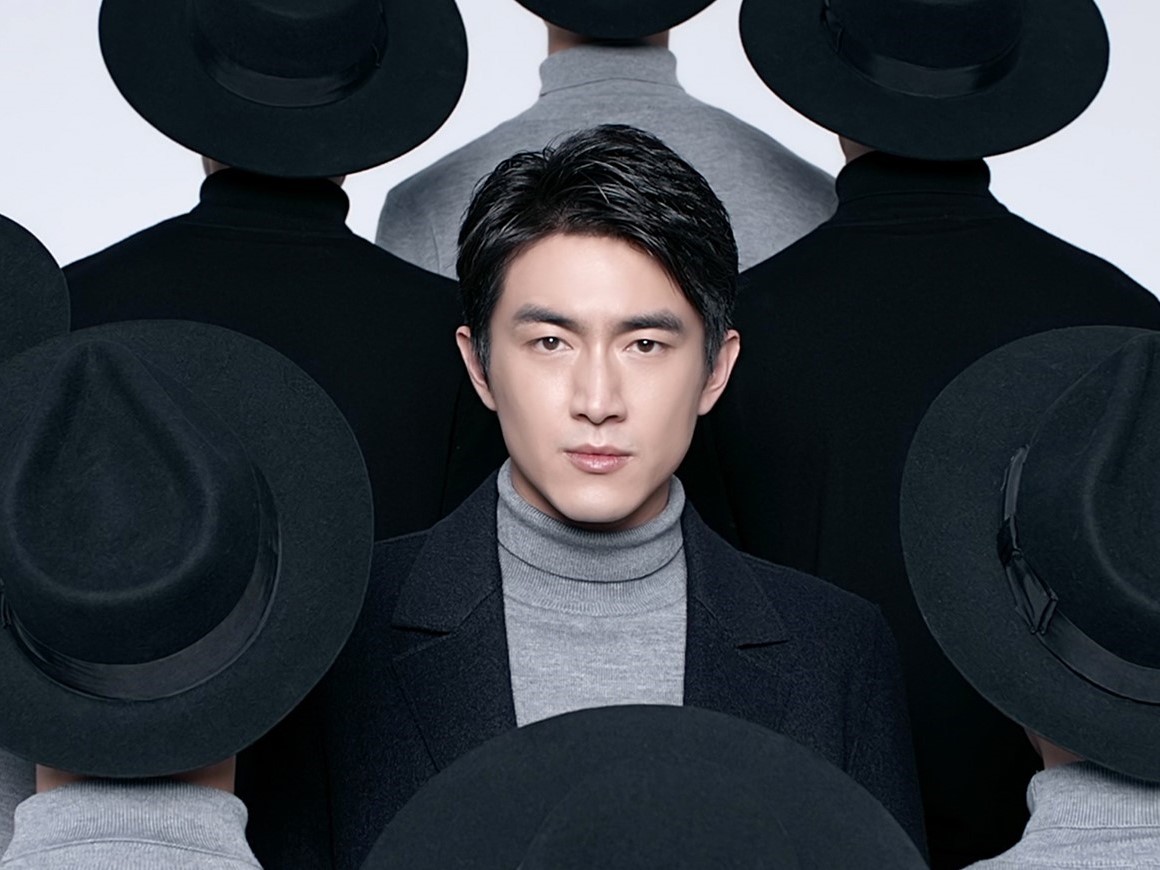 ► Last year, HLA placed itself among the ranks of the world’s top-performing fashion companies.

►The driving force behind HLA’s rapid growth has been its innovative marketing strategies and business model, which relies on offline stores. However, in the long term, the company needs to expand its business’ online stores.

Jiangsu-based HLA Corporation (海澜之家, 600398:SH) was set up by Zhou Jianping, now one of the wealthiest people in China’s fashion industry, in 2002. Zhou got into the apparel business with the money he earned from running a photo studio. The company has grown rapidly since then.  It now runs more than 6,000 clothing stores (under HLA Men’s, HLA Jeans, HLA Lads and OVV brands) and lifestyle furnishing stores (HLA Home). These stores are mostly located in China’s second and third-tier cities – by comparison, Zara has around 3,000 stores globally and 229 stores in mainland China.

Last year the company recorded a CNY 3.2 million net income and its current market valuation is estimates as CNY 26.7 billion. With these growth numbers, the company placed itself among the ranks of the world’s top-performing fashion companies, according to a new report by consultancy McKinsey & Company and media outlet The Business of Fashion.

The report ranked the industry’s 20 ‘super winners’ – those companies making nearly all the industry’s economic profit, defined as recorded profit minus its cost of capital. HLA Home finds itself on the 16th rank, just above H&M. 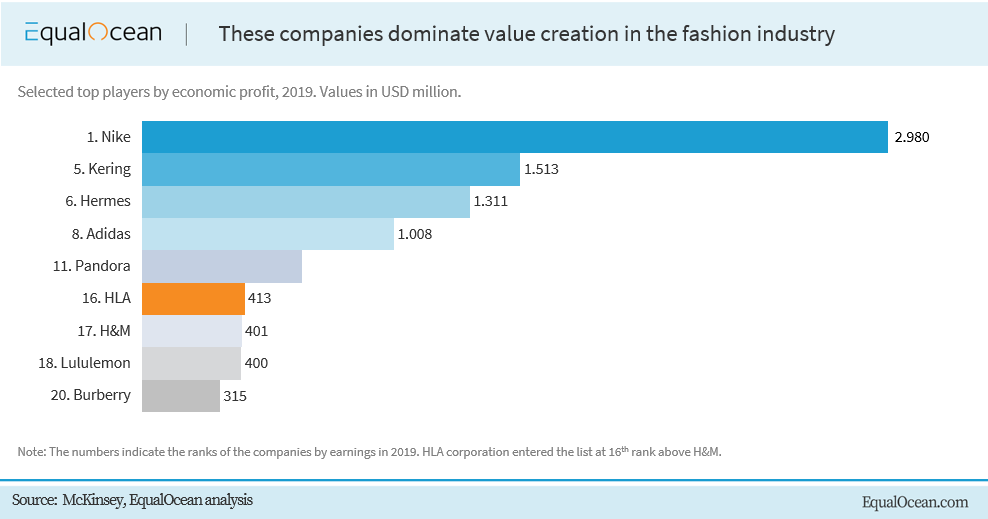 But how did the company archive this success within just two decades?

There are various grounds upon which the company has made its achievements. The most significant one is HLA’s own ‘private label strategy,’ which is quite different than other successful fashion brands operating in China.

Traditional clothing companies design their product lines and let dealers and franchisees sell the products. By doing so, they do not expose themselves to the massive cost of setting up brick-and-mortar shops. On the other hand, brands like Uniqlo and Zara adopt a private-label strategy, designing the clothes, operating their own storefronts, selling to customers directly and generating meaningful profit through economies of scale.

But HLA took this strategy and turned it into a more aggressive and profitable trick: the company’s business model is not doing design work but ordering directly from design suppliers and not paying them until their products have been sold. 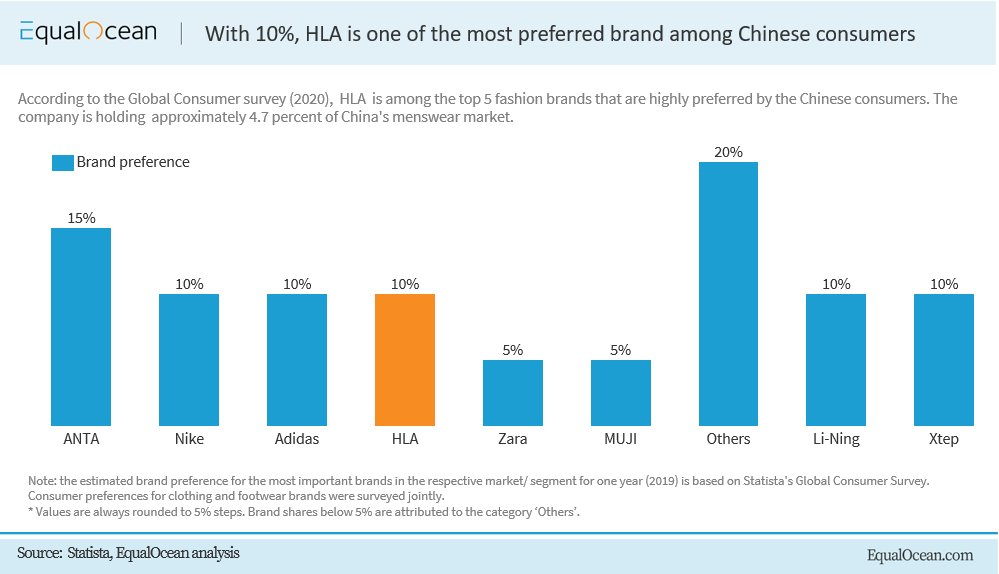 How it became so dominant in the menswear market is explained by another strategy. In the beginning, the company positioned itself in a market segment where the competition was less fierce – the company opened its stores mainly in China’s second and third-tier cities and attracted middle-class men. If the company had operated in first-tier cities at first, its business would have disappeared under heavy completion. While China’s first-tier cities are full of Zara, H&M, Uniqlo, and MUJI shops – where customers find similar products to HLA – the lower-tier cities have almost none of them.

Furthermore, on the storefront side, HLA’s strategy is also unique. Even though an HLA store may look company-owned, it is actually a franchise. Property owners will have to pay around USD 300 thousand or CNY 2 million in advance, half of which is for store renovation and staffing, the other half a deposit. In return, HLA sends over staff and managers to operate the stores. 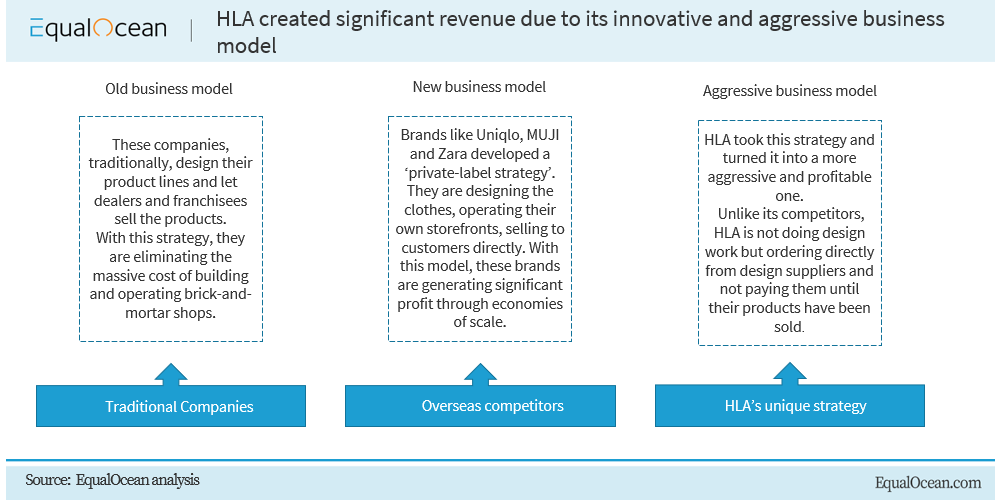 Lastly, when HLA entered the fashion industry, the company was only focused on low-priced and mostly out-of-fashion menswear. The company gained a lot of attention due to its unpolished TV commercials, showing middle-aged men dressed in cheesy outfits, dancing while shouting the slogan, “Every man should come to HLA for shopping, twice a year!” As a result, many young consumers considered HLA an unfashionable brand. Later, the company recruited Lin Gengxin, one of China’s most famous younger male actors, as HLA’s brand spokesperson. Commercials were made revolving around Lin being fancy and chic – in a style resembling international fashion brands. HLA also collaborated with internationally renowned designer Xander Zhou to launch a limited series.

In addition, HLA invested CNY 100 million in the domestic women’s wear brand UR – Urban Revivo, known as ‘China’s ZARA,’ in August 2018. Two months later, the company invested about CNY 660 million into the children’s wear company Yeehoo, and officially entered the maternal and infant clothing business. Meanwhile, it ventured into the design-oriented household goods market, of which the Japanese brand MUJI is currently the leader.

In the meantime, following a tradition for every successful Chinese company, after its domestic business gain momentum, HLA decided to go global. At the moment, the company runs retail stores in Thailand, Malaysia and Singapore. It has been underlined in a company statement that this move was due to the active response from the company to the national ‘Belt and Road’ initiative. HLA hopes to gain ‘nutrients from global vision’ for its designs by expanding in global markets.

Currently, the fashion giant’s revenues mostly come from its brick-and-mortar store sales. However, the future of profitability in the fashion industry depends on online activities – especially for HLA.

For example, the famous American fashion brand Forever21 went bankrupt last year due to the unsuccessful management of its online and offline sales. The company expanded its global offline stores massively up to the point that the cost of operating those stores was higher than the combination of offline and online sales.

Therefore, improving online sales while carefully managing its offline stores seems to be the biggest challenge for HLA in the future.

But the good news is the company has already started taking action to improve its online business. In late 2017, Jack Ma, the founder of China’s e-commerce behemoth Alibaba, visited HLA company headquarters and subsequently signed a strategic cooperation deal with HLA in the ‘new retail’ business unit. Alibaba promised that its e-commerce platforms – lead by Taobao –  will provide unique and high-quality services to help HLA enhance its brand influence and online sales.

Meanwhile, Alibaba is not the only e-commerce giant trying to make a profit out of HLA online business. JD.com, better known for retailing electronics and other goods, wants to improve its platforms fashion game. In 2018, the company’s CEO Richard Liu seized an opportunity to express his sincerity to HLA by posting photos of himself wearing HLA’s clothes on Chinese twitter Weibo, saying that it’s a trend for men to buy HLA menswear on JD.com.

Well, by now, our readers must be wondering what is Tencent doing? As in every occasion when Alibaba or Tencent eyes an opportunity, the other one follows.

In 2018, Tencent acquired 5 percent of HLA. The two companies are said to establish a joint venture dedicated to investing in the clothing industry, according to 36Kr (link in Chinese).

The driving force behind HLA’s rapid growth has been its innovative marketing strategies and business model, which relies on offline stores. However, in the long term, the company needs to expand its business’ online stores.

The biggest challenge is going to be finding a balance between internet giants. On the one hand, in terms of new retail, Alibaba is a front-runner, and is more versed in selling things to Chinese consumers. On the other hand, Tencent has JD, which is a reliable ally in online retailing. It also has a strong card in WeChat, which is the most popular mobile app in China and an ideal vehicle to connect things, online to offline – or vice versa.