We guide you through a simple history of China’s cloud services and provide our perspectives on the first Chinese cloud stock listed in the US. 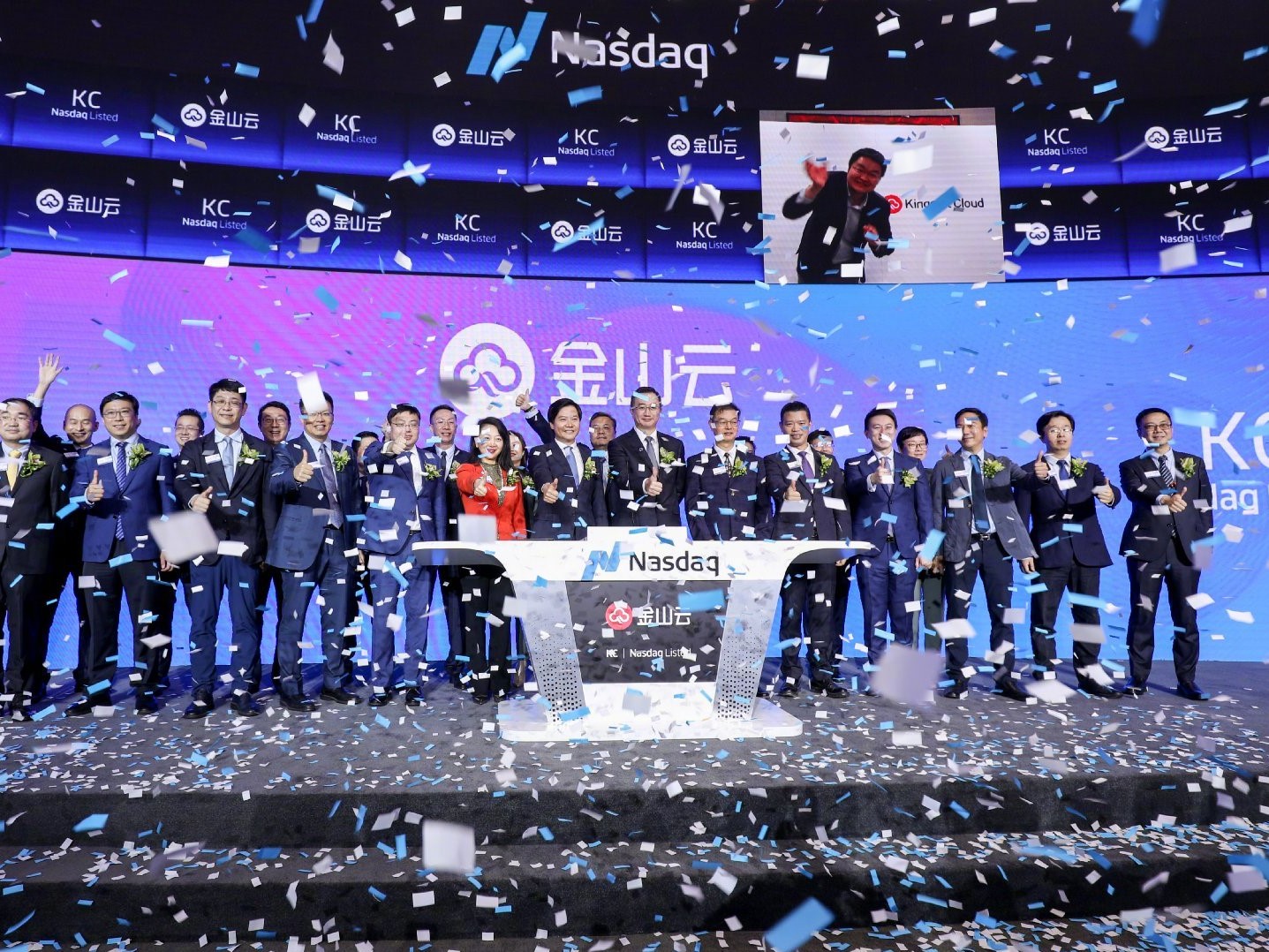 Kingsoft Cloud (KC:NASDAQ) is a public cloud service provider in China. This is the fourth listing to spin off from Lei Jun’s Internet/smartphone Kingdom. Others include Kingsoft Corp Ltd (03888:HKEX), Xiaomi (01810:HKEX), Kingsoft Office (688111:SH).

►KC has established its unique market position in China's cloud market – a focus on large enterprises, differentiating itself from BAT's SMB strategy.
►The secular cloud migration trend, rising net dollar retention, and multi-cloud are likely to boost KC's top line.
►In 2020, we believe the company is on track to reach higher business growth and further boost EBITDA thanks to increasing demand for public cloud services as well as demand from strong verticals (livestreaming and gaming) during the coronavirus.

►The losses have already started to narrow, but the timeline and path to profitability may be uncertain.
►The Large D&As address pressure to EBITDA numbers, which will further increase as KC puts more proceeds into infrastructure/data centers in the coming years.
►Two strong enemies, Alibaba and Tencent, have captured more than half of the cloud market in China. KC ranked #5 in China's cloud market with limited market share.
►Potential price war and fierce competition.
►High customer concentration adds potential risk to the company's revenue stability.

The history of the cloud in China 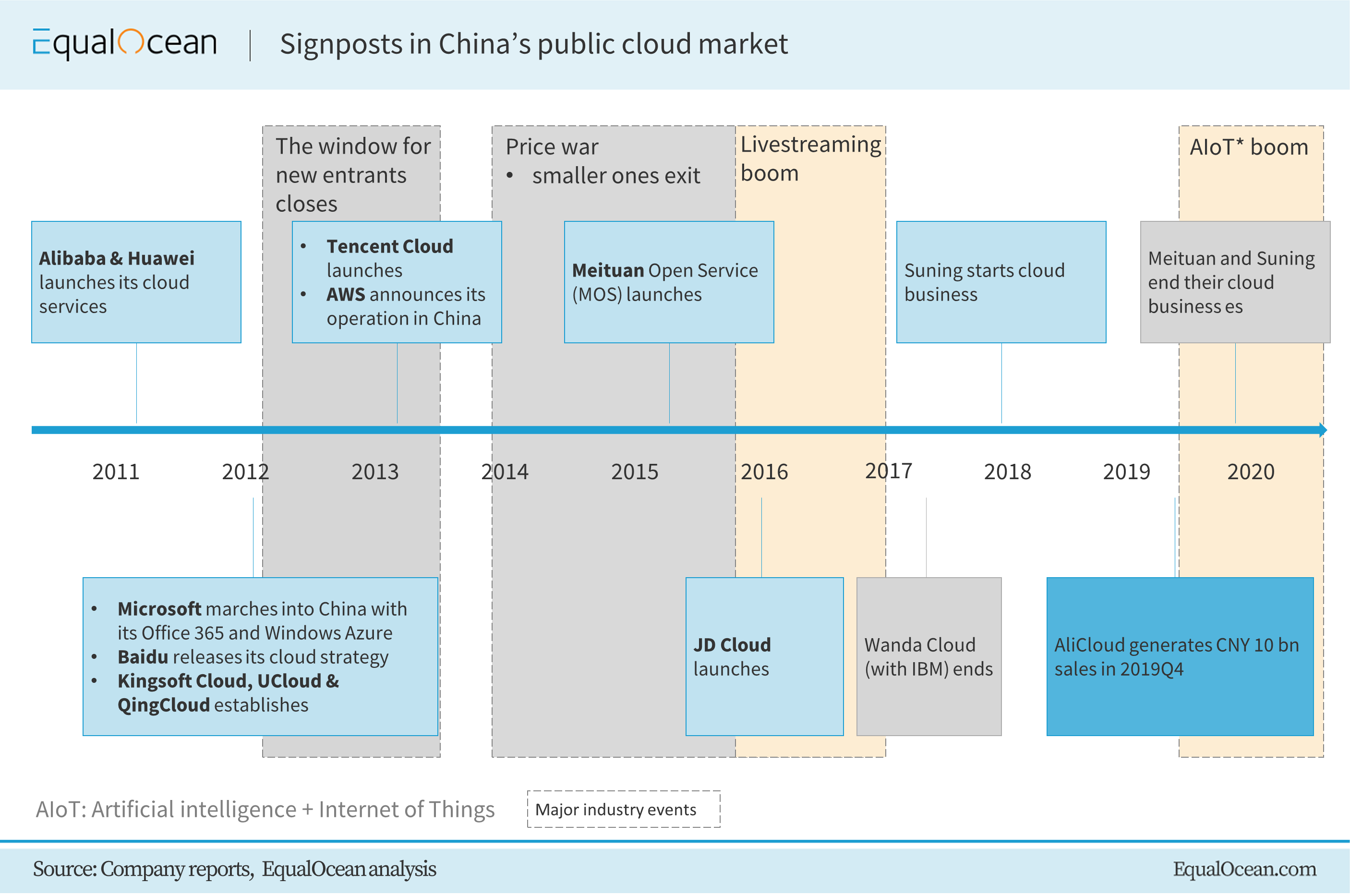 The year of 2012 ushered in the era of cloud in China. E-commerce giants Alibaba and Amazon, along with Microsoft, launched their cloud service offerings in the country from 2011 to 2012. Nimble smaller startups such as UCloud, QingCloud, Kingsoft Cloud joined the game subsequently.

The window of opportunity closed slowly – or suddenly, for laggards. The real estate behemoth Wanda Group, house appliance maker Suning and delivery platform Meituan all failed to catch up on time and decided to close their cloud businesses years later.

Just as AWS grew out of Amazon's core e-commerce business, Chinese cloud pioneers are designed to service the parent companies/ecosystems. The cloud business will only start to commercialize when technologies and operations are both ready. However, the development paths are different. For instance, Alibaba Cloud has gained 200,000 new Small and Medium Businesses (SMBs) as customers through the merger of HiChina Web Solutions, an enterprise domain solutions provider founded in 1996. Tencent Cloud, on the other hand, has used Tencent's large gaming business at first to drive the growth since its inception. Likewise, Kingsoft Cloud's business engine relies on Xiaomi's Internet of Things (IoT) platform, Kingsoft's gaming and office.

In 2016, Kingsoft found one of its most promising verticals in recent years – livestreaming. The rise of significant video/broadcast platforms like iQIYI, Bilibili and ByteDance has yielded the company's first batch of Key Accounts (KAs), bringing high-value orders and, more importantly, helping to build KC into a reputable brand in the industry.

Till now, KC has explored all the ways to thrive in this competitive market – neither relying upon acquisition, nor ecosystem. It has a proven record on showing how to ride on the wave of trendy industry verticals that cloud service adds value to – entering at the right time, capturing mindshare among leading brands and gradually occupying the whole industry.   Kingsoft has been focusing on serving enterprises since 1988. The parent company shows how to navigate the success of its cloud business.

Another unique advantage the firm captures is born naturally – or as KC calls it, the 'independent supplier.' For a long time, doing business in China made it hard to avoid face competition with Baidu, Alibaba and Tencent (BAT) or the kingdoms they had built. Choosing Alibaba Cloud or Tencent Cloud signals that you belong to one of these two 'alliances.' Kingsoft thus is a trustable standalone cloud service provider for customers that are reluctant to choose sides.

Moving into the 2020s, we see substantial potential lying in the AIoT; this is also one theme of China's 'new infrastructure' development mission. 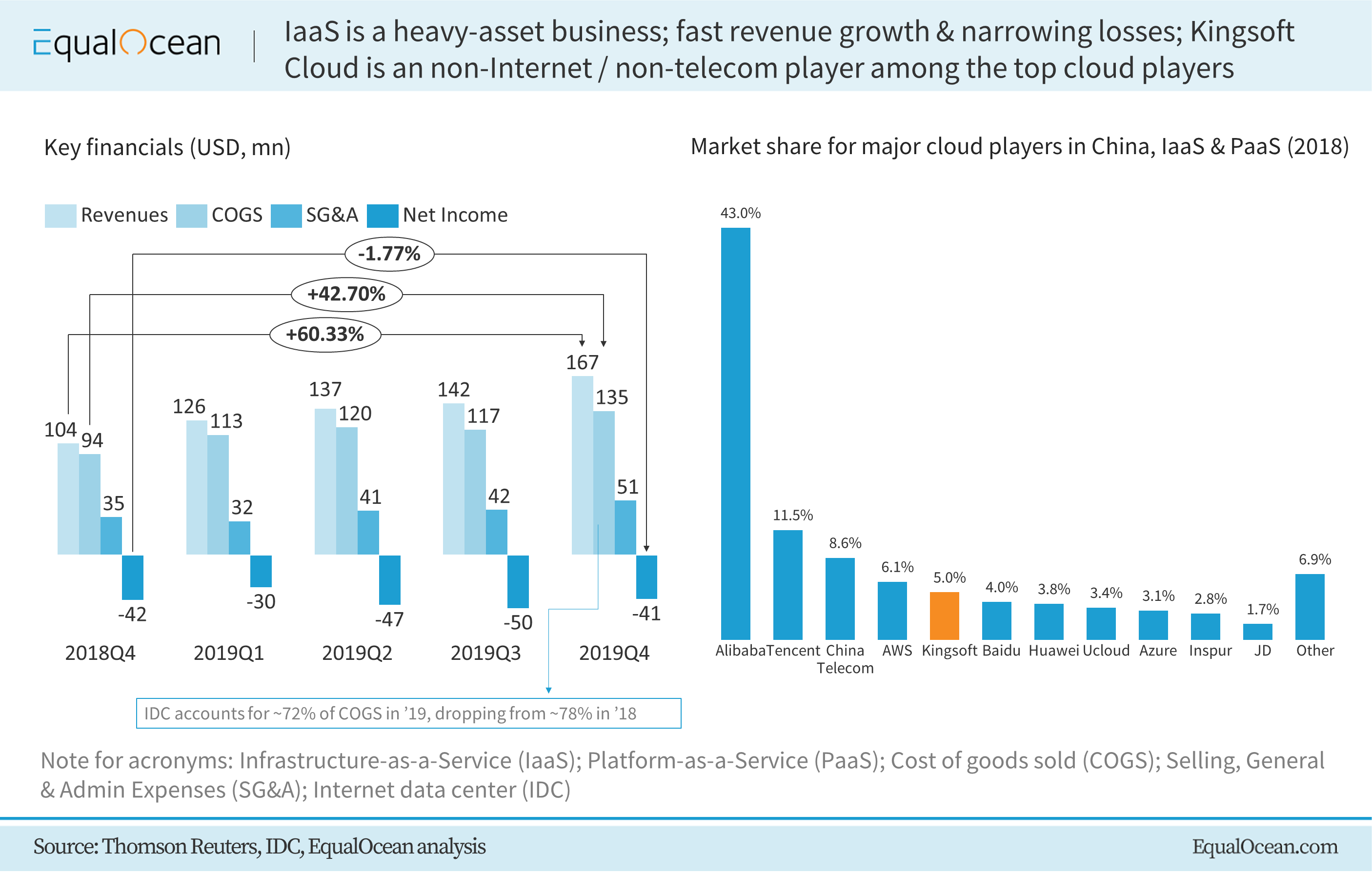 But the timeline and path to profitability remain uncertain given the market competition landscape and relatively low market share. KC has proved its ability, ranking at #5 as a non-Internet giant and non-telecom player. However, the lucrative and vast SMB market in which Alibaba and Tencent are dominant remains untouchable now.

We are staying cautious about how KC could compete with these two. It remains hard for customers to switch their cloud service providers, given the high switching cost for data migration. AT's Customers are likely to stay in cloud services unless there is a significant advantage provided by other suppliers. 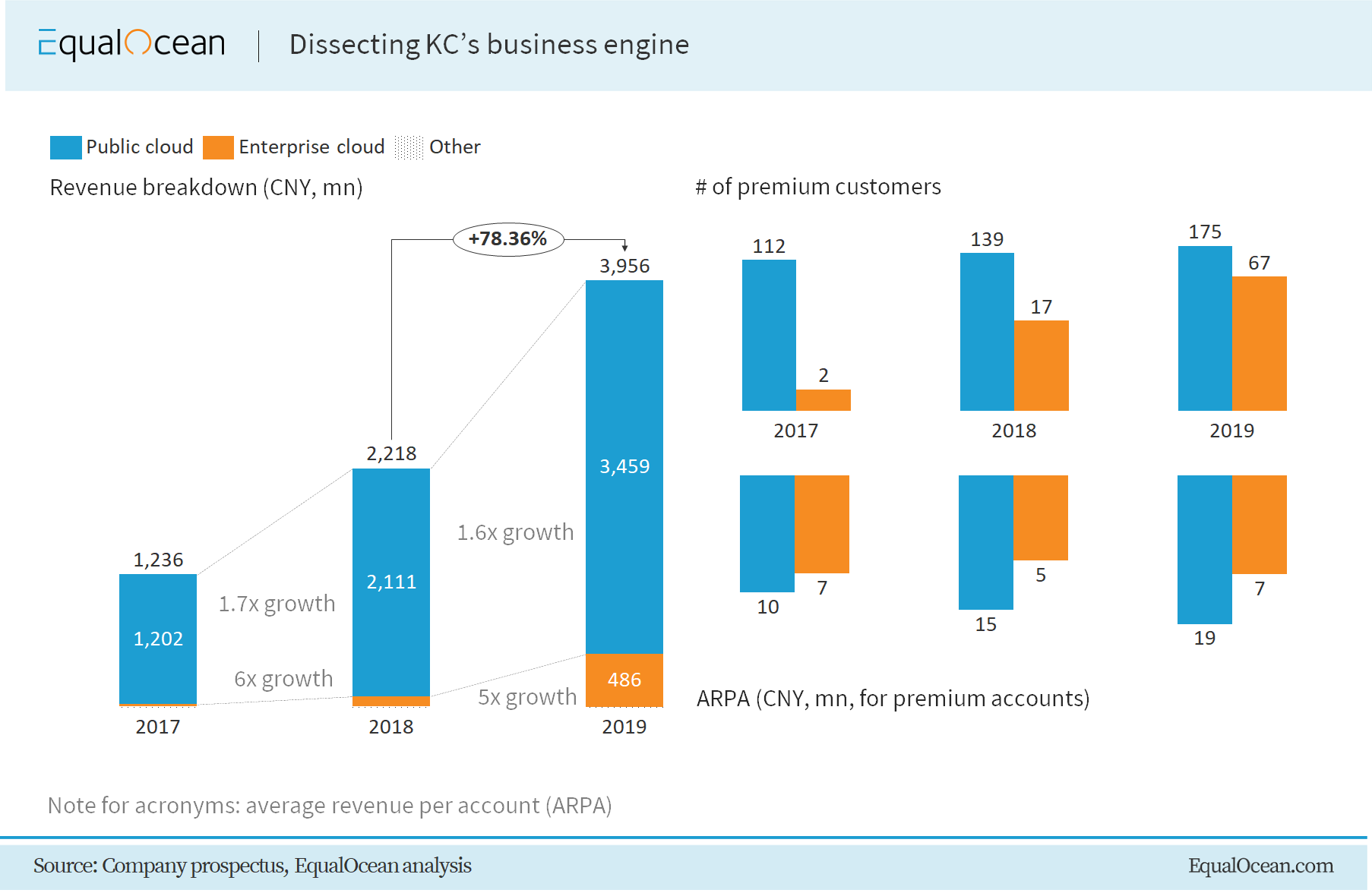 On the other hand, we see the company ramping up enterprise cloud services, which kept 5x and 4x growth in 2018 and 2019, respectively. The company charges on a project by project basis for this, serving financials and governments. We see three opportunities for KC to keep growing its revenues in the future:

Rising net dollar retention rate. KC's average revenue per premium account (ARPPA) in the public cloud service business rose to CNY 19 million in 2019, from CNY 10 million in 2017. ARPPA for enterprise cloud remained relatively stable from 2017 to 2019 (KC only disclosed its premium account/customer performance, which contributes ~95% of revenues – this also resonates with the KA strategy, as mentioned above).

Similarly, according to The Information, AWS bills for several big customers increased significantly from 2017 to 2018. Pinterest, for instance, raised its spend on AWS from ~USD 140 million in 2017 to ~USD 190 million in 2018, due to rising customer demand asking for more capacity of storage/instances. Pinterest is hardly alone. During the pandemic, iQIYI and Bilibili (both are KC's key clients) saw rising stock prices, which we think will lead to an additional purchase for KC cloud services.

Multi-cloud opportunity. As per KC prospectus, ~26.0% of enterprises, with over 1,000 employees in China, are using a multi-cloud strategy, compared with 85.0% in the US. The high switching cost for AT's customers might consider KC, an independent cloud service provider, as a second choice.

CONTACT US
Scan QR code to contact us for professional consulting services
Next article
The Hidden Giant of the Fashion Industry: HLA Corporation