More than 5G Equipment: A Glance at Huawei’s Troika of Businesses

What has been driving the growth of the headline-hitting tech giant? 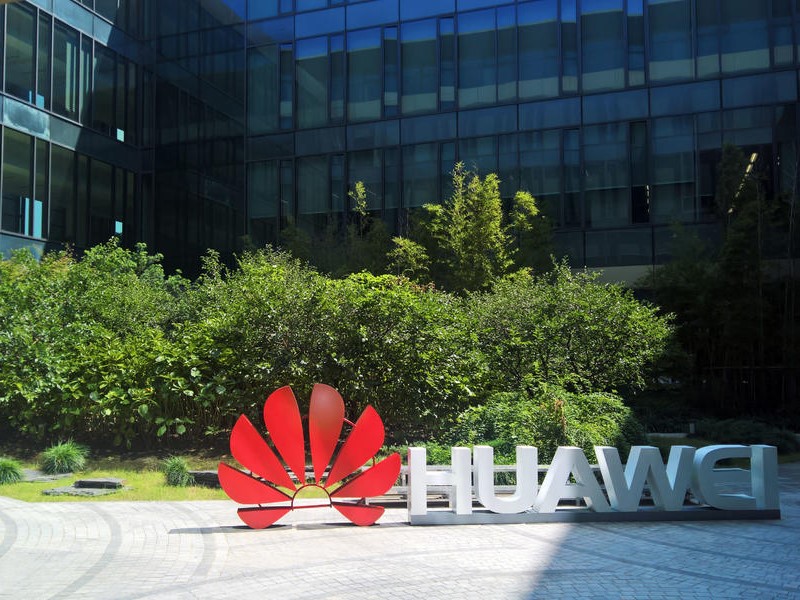 ► Huawei has developed a moat in the global telecom network field.
► The firm’s private status and a strong bias toward hardware are hampering its rather inevitable shift to a service-focused model.

In 2019, it was ranked 61st among all the Fortune 500 companies and 15th among its compatriots by the annual revenue. That same year, it churned out over 240 million handsets, grabbing 17.60% of the worldwide smartphone market. Responsible for nearly 30% of Europe’s mobile infrastructure, it is currently dominating the emerging 5G space, boasting up to 40% of the fifth-generation equipment contracts closed globally.

Huawei’s rapid, improbable rise from a ‘just another Chinese electronics copycat’ to a major future-shaping force has become a ghost story for both the largest players in the technology sector and a few high-ranked populists in some countries. Their concerns don’t appear from nowhere: a globe-straddling colossus, the Shenzhen company is resilient like no one else. Even during the toughest period of the COVID-19 outbreak, it managed to stay buoyant, seeing its gains inch up by 1.4% in the first quarter of 2020.

Such prowess is a result of something more than the proverbial hard work and dedication. The manufacturer claims to have spent more than CNY 600 billion on research and development over the past decade, with nearly half of the 194,000-strong workforce pushing innovation internally. The firm had in excess of 85,000 active patents as of the end of 2019. Rather aggressive in its hiring policy, Huawei is openly seeking top-notch talents, recruiting technicians all over the place.

Internally, the company’s infamous ‘wolf culture’ is considered one of the essential growth drivers. “While working on a certain project, every employee knows the basic things that the firm requires him to complete,” a former Huawei employee told EqualOcean. “Moreover, everybody shares the responsibility for the success or failure of the entire project.”

At the same time, questions abound about its organizational structure and management system. 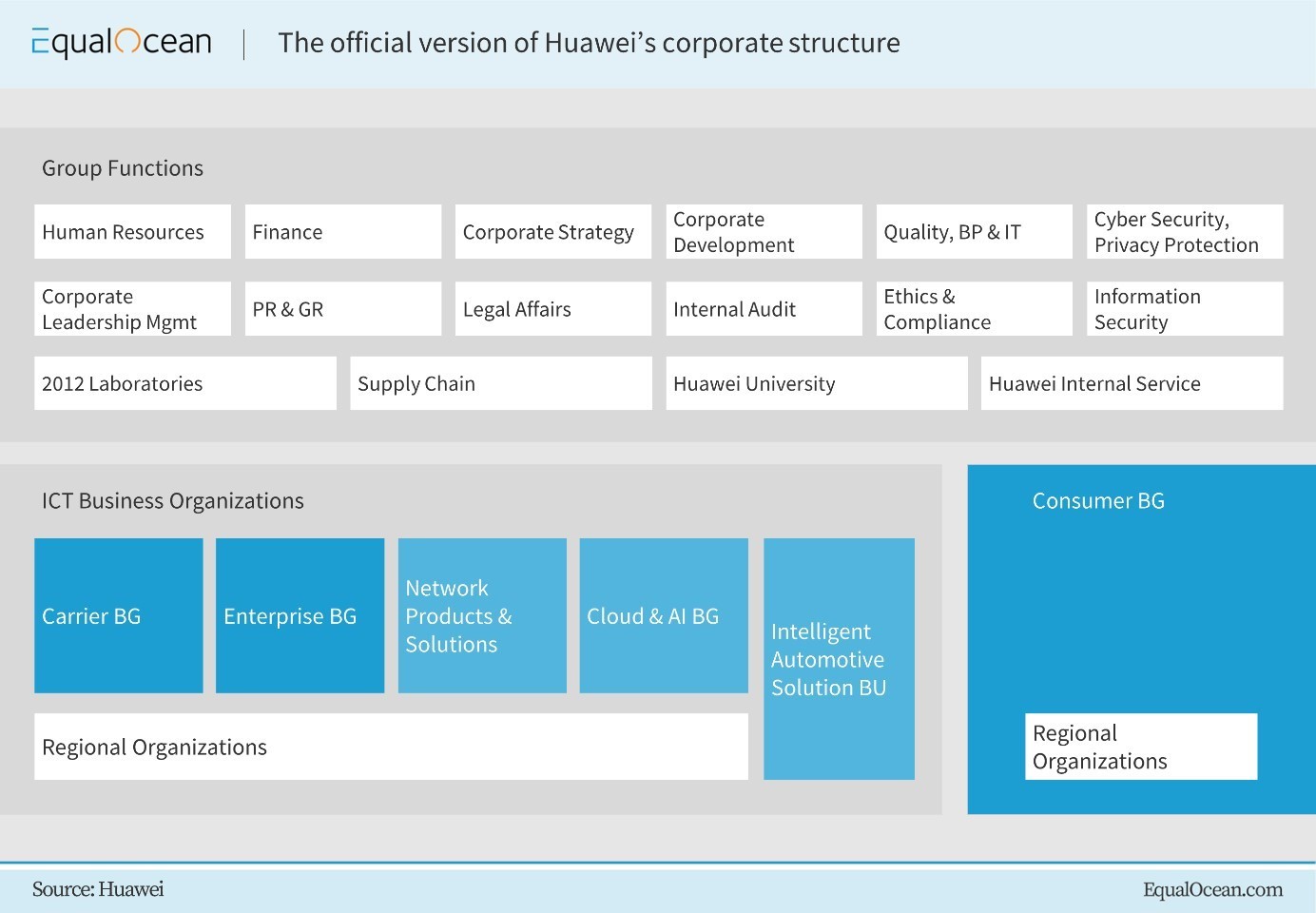 Because of the firm’s ever-private status, we can’t say for sure how exactly and under whom the gargantuan Chinese machine is running. While the official framework of corporate governance can reflect reality, it doesn’t show us how the decisions are typically made within the company. However, this scheme is a useful reference for possible short-term changes in Huawei’s product mix and expected alterations in its market strategy.

In many respects, the hardware producer is in a class of its own. Unlike Xiaomi (1810:HKEX), another China-based electronics trailblazer, which has made a significant lurch to the consumer sector, it tries to grasp both halves of the final demand for Information and Communication Technology (ICT) products: from businesses (2B) and individuals (2C).

The former segment is where Huawei excels. Nowadays, there is a lot of political hullabaloo around its unique position in the wireless networks industry. But the corporation has been here for a long while, with more than half of its revenue coming from this domain between 2012 and 2017. Primarily benefitting from 4G’s rollout a decade ago, it has since grown in terms of technical capabilities and transformed the market mix into a more balanced menu. 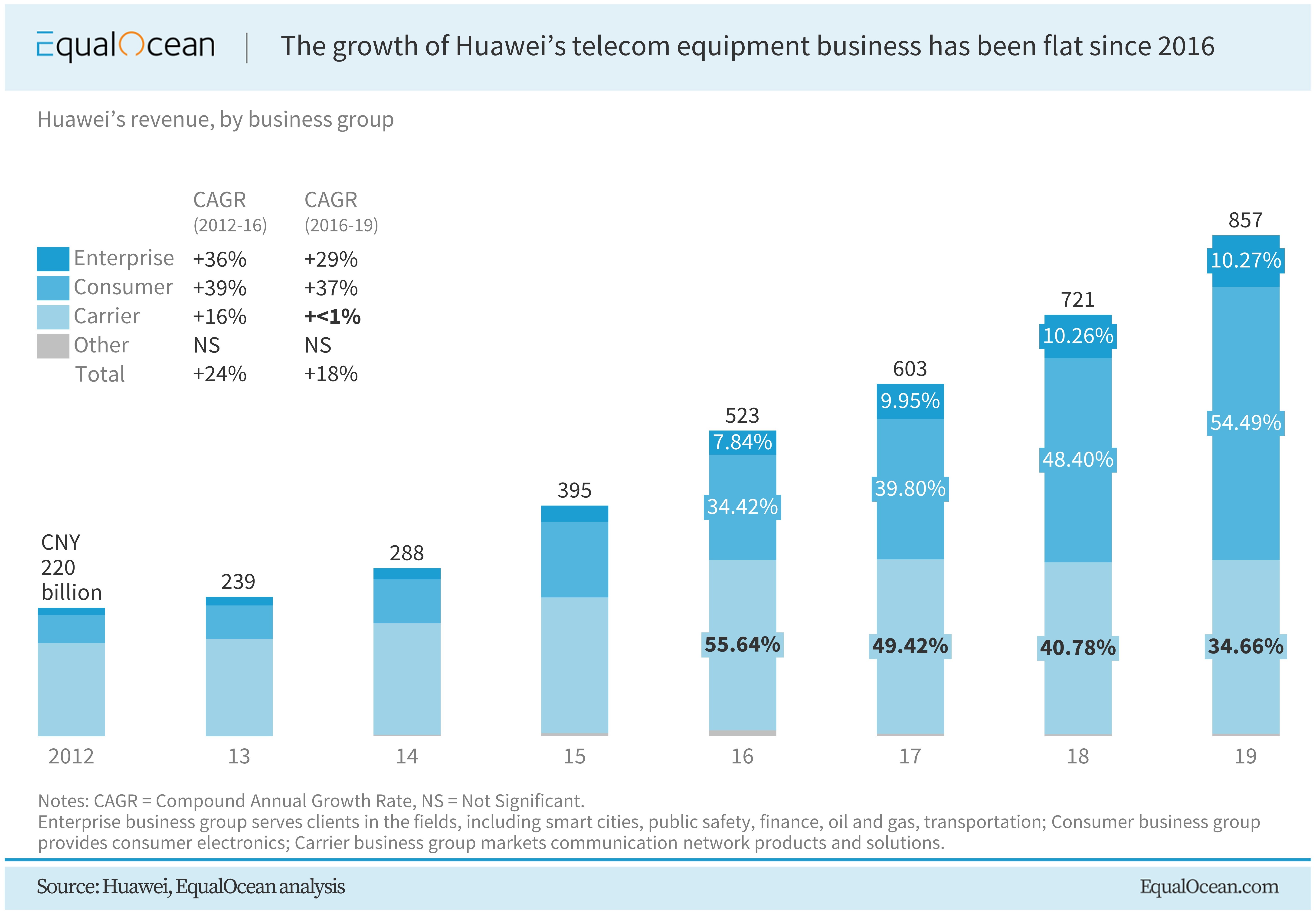 Quite obviously, the early bet on the concept of omnipresent connectivity has turned out to be the critical ingredient of Huawei’s headway. Its low-priced fair-quality hardware has occupied markets across scores of countries, boosting the downstream that is now full of highly committed mobile operators. Their loyalty is derived from well-known economic fundamentals: each next generation of wireless technology is cheaper when it is built on the existing setup. That said, switching vendors is often too expensive for cellular companies.

Stable earnings coming from the 4G infrastructure contracts enabled the firm to develop a strong presence in the consumer electronics area. In the past two years, sales of handsets, wearables, laptops, home appliances and other devices designed to make our lives easier brought it CNY 815 billion (around USD 115 billion). Meanwhile, the Enterprise Business Group, which is mainly involved in providing solutions for smart cities, public safety, finance, oil & gas and transportation, has seen its operating income increase at a 33% CAGR since 2012.

Apart from that, the company is making attempts in cloud computing – it seems to be a bit tardy though, and having a hard time expanding the scale in the newborn oligopolistic market. Fintech, Artificial Intelligence (AI) and other buzzwordy concepts are being leveraged by Huawei, too, but the magnitude is minuscule, compared to the country’s other big tech names.

One difficulty is that these are a hard nut to crack. The firm’s traditional business – hardware – always gets commoditized at a certain point in time, with customers then looking for a better deal, ignoring non-price aspects. Software, contrastingly, requires way more than just stellar economics. In short, there is apparently a long path ahead for the Shenzhen manufacturer’s non-hardware endeavors.

“We make everything that transmits or processes the data: the network, the device on the edge, but these pieces are not integrated, as we don’t touch the data,” Huawei vice president of corporate strategy planning for banking and financial markets William Genovese told EqualOcean in a recent interview. “We could probably grow even further into this space if we looked at the data more, connecting all these pieces.”

CONTACT US
Scan QR code to contact us for professional consulting services
Next article
Kingsoft Cloud: High Score on the Horizon