With an aging Chinese population and the rising addiction to electronics, ophthalmological medical institutions are faced with enhanced demand. 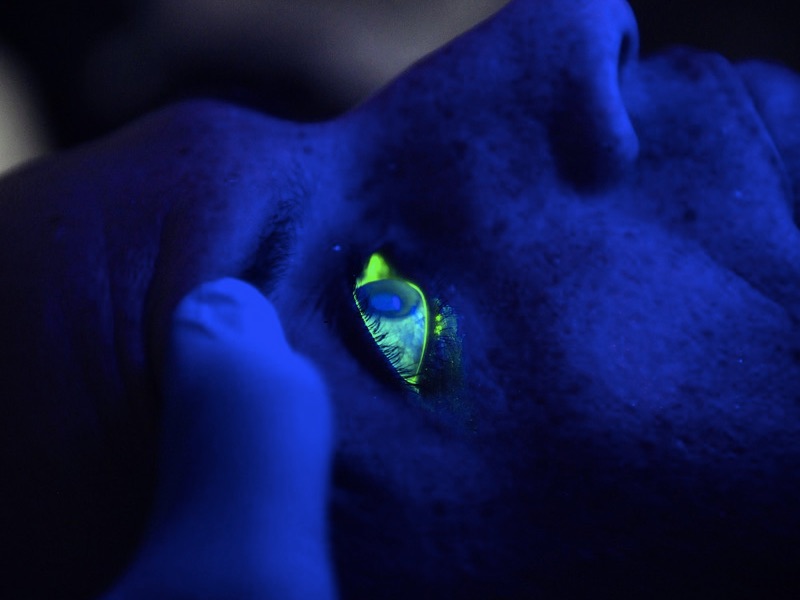 ► Aier Eye Hospital’s revenues have been growing steadily, with a stable profit margin.

► Both regulations and the potential market have been attracting investors’ attention.

The Aier Eye Hospital Group (300015:SZ) has more than 600 hospitals around, making it the largest eye hospital chain in China. The giant engages in medical services, optical services and more besides.

Aier, founded in 2013, is the by far the largest private eye chain, yet it has strong public and government-supported peers. Only a few hospitals have such strong competitiveness in clinical and scientific research, including Beijing Tongren Hospital, Zhongshan Eye Center of Sun Yat-sen University in Guangzhou and the Otolaryngology Hospital affiliated to Shanghai Fudan University.

Among the selected three heavyweights that engage in healthcare services in China, Aier Eye Hospital generates the highest revenue and stable increasing rate at an average of 33.57%. In the past five years, total revenue tripled with net profit margins of around 14%. 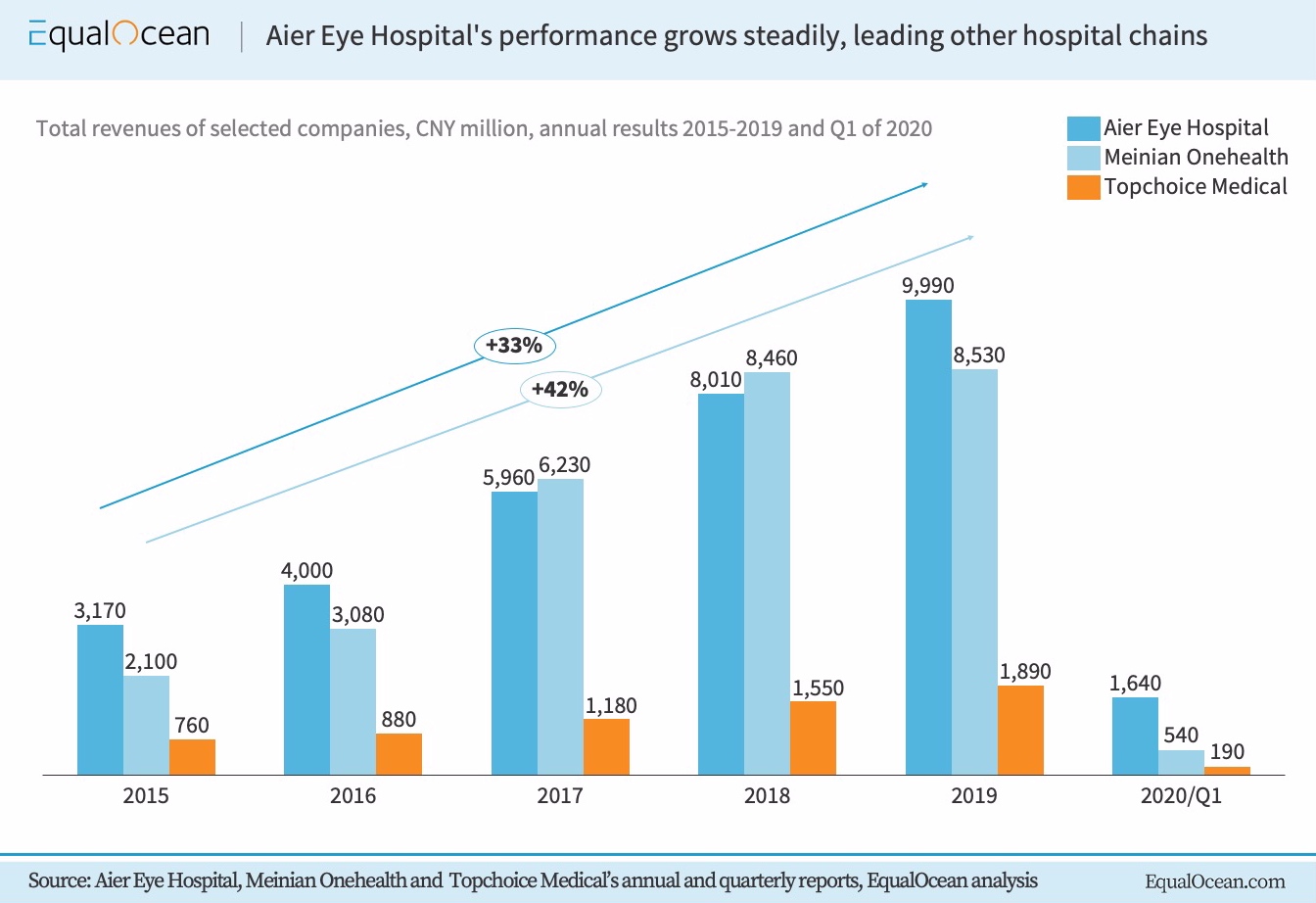 The company claims that a ‘Hierarchical chain’ is the secret behind its stable growth. The firm describes it as thus: the first level is located in Shanghai and is positioned as a technical and difficult consultation center; the second level in the provincial capital city is the profit center; the third level is a ‘customer center,’ providing ‘optometry’ and diagnosis and treatment of common eye diseases for the most extensive patients.

To date, China has created hundreds of chain businesses across many industries. However, a chain healthcare service with a hierarchical model may be a major breakthrough for the development of private hospitals, because this model is very suitable for China-specific conditions: extensive borders, high population, uneven urban and rural development.

However, Meinian Onehealth (002044:SZ), although it exceeded Aier Eye Hospital in terms of revenue in 2017 and 2018 and even grew more than three times in size in the past five years, was overtaken recently in terms of revenue. In addition, obviously, Topchoice Medical’s (600763:SH) revenue is far from that of the eye hospital giant even though the former’s increasing rate is stable as well. Regarding the net profit margin, the other two companies experienced fluctuation with higher profitability.

In the first quarter of 2020, affected by the epidemic, all three companies experienced sharp declines in revenue. What made Aier Eye Hospital stand out was positive net income – whereas the other two firms suffered a loss. People took online lessons, conferences, and teenagers in particular spent more time on gaming, which may have caused individuals to strain their eyes.

Refractive surgery and cataract surgery had always been the company’s main sources of revenue, generating the most regular cash, but vision services surpassed cataract surgery to rank second and can be seen as the company’s core business. They accounted for total income from 18% to 21% in the past five years with tripled revenues and gross margin rising 2%. 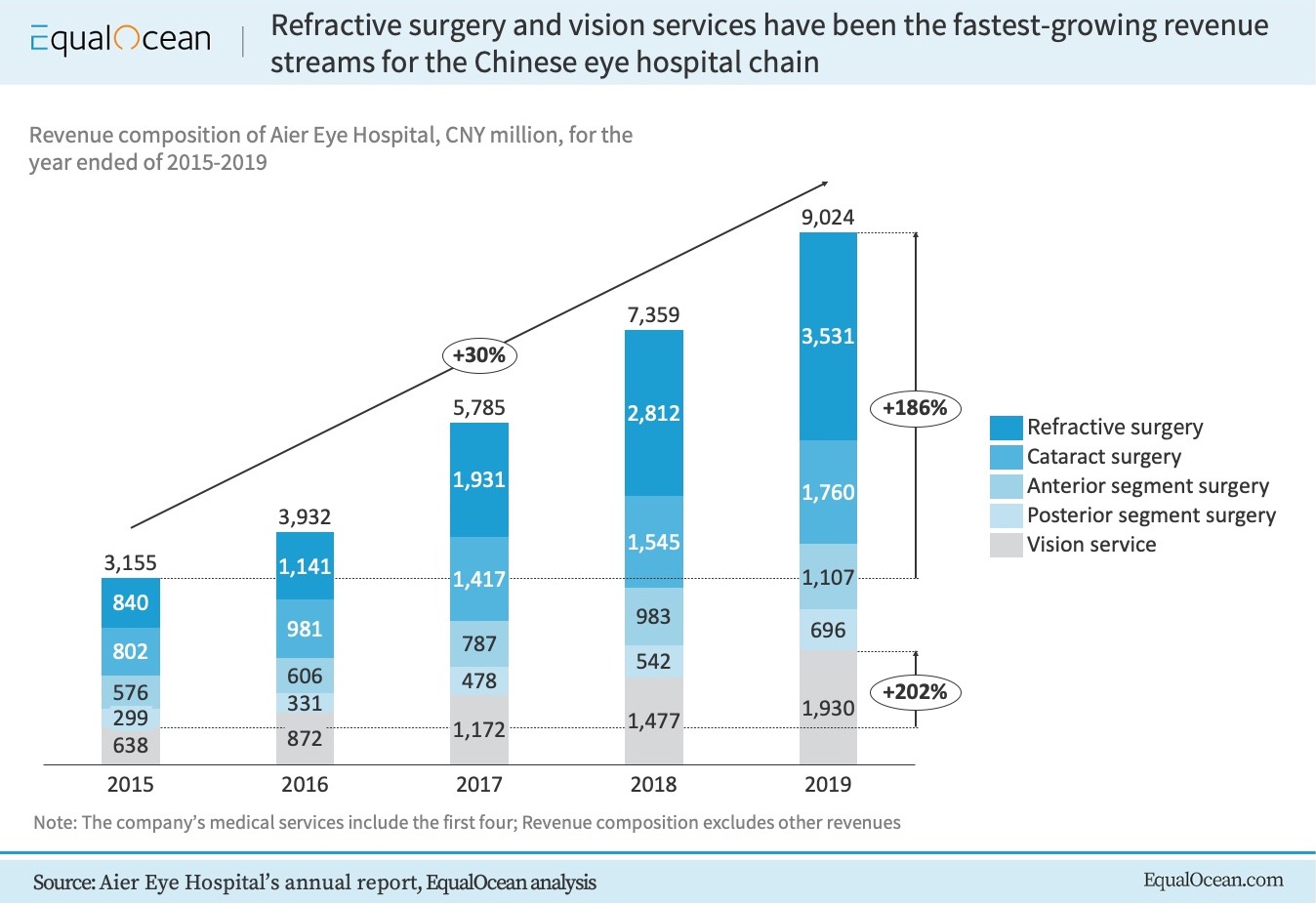 This is mainly due to the rapid increase in the amount of surgery in various hospitals; the proportion of high-end surgeries such as IFE and ICL has further increased, resulting in a situation in which both the volume and price have risen. On the other hand, the company has stepped up efforts to speed up the construction of refractive departments in county-level hospitals everywhere, the company said in its annual filing.

The slowdown in revenue growth of cataract surgery has provided vision service with a catch-up opportunity. In the past two years, the state has implemented a medical fee control system, and will fully implement a multi-compound medical insurance payment method based on disease-based payment. In the past two years, the cataract project has been controlled by the medical insurance policy, and the growth rate of surgery has gradually slowed down.

The National Development and Reform Commission and other 18 departments jointly proposed to support social forces in the field of ophthalmology and other specialties to accelerate the creation of a number of competitive brand service agencies in January 2019.

Committee of the National People's Congress clearly pointed out that medical and health institutions organized by social forces have the same rights as those established by the government in terms of basic medical insurance on December 28, 2019, further enhancing the competitive advantage of Aier Eye Hospital.

Potential markets light up the road

The results of the 2018 National Survey of Myopia for Children and Adolescents published by the National Health and Welfare Commission indicate that the overall myopia rate of children and adolescents in the country reached 53.6% in 2018. Moreover, the total number of myopic patients in China has reached 600 million, showing a trend of younger sufferers of myopia. Coupled with the impact of the epidemic, people's dependence on electronic products has rapidly increased, providing high demand for the services of ophthalmologists.

According to AVIC Securities, the size of China's refractive medical service market in 2018 was approximately USD 26.25 billion, and the market size is expected to be USD 37.54 billion in 2020 calculated by the amount and price of surgery. As the company's largest business, healthcare services have significant room for improvement.

Particularly, the aging of the population in China is increasing, and the elderly over 60 years old are the most cataract-affected people. This has injected light into the development of Aier Eye Hospital’s cataract business.

Both the country's medical policy and the further expansion of the market scale support the growth of private hospitals, cresting to the firm’s business. Aier Eye Hospital still has to work hard to compete with public hospitals that have inherent advantages.

CONTACT US
Scan QR code to contact us for professional consulting services
Next article
Bilibili Q1 2020, Marching towards ‘Controlled Expansion’ [1/2]