The Chinese mainstream online entertainment platform, whose revenue used to depend on a single game project, has continually been optimizing its income distribution while maintaining decent growth. 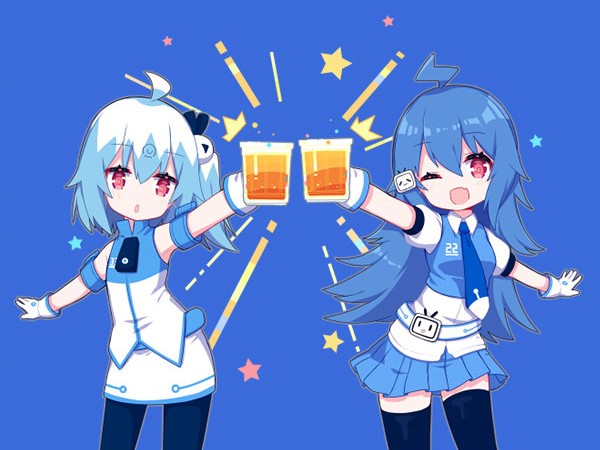 Bilibili (BILI:NASDAQ) announced its first-quarter results late May 18. Its stock price hit a record high midday and closed with a 9% increase to USD 33.66.

Average Monthly Active Users (MAUs) reached 172.4 million, representing an increase of 70% from the same period in 2019.

► Income structure inside the mobile gaming segment has become more diversified; the dependency on a single item (Fate/Grand Order) continued to decrease. 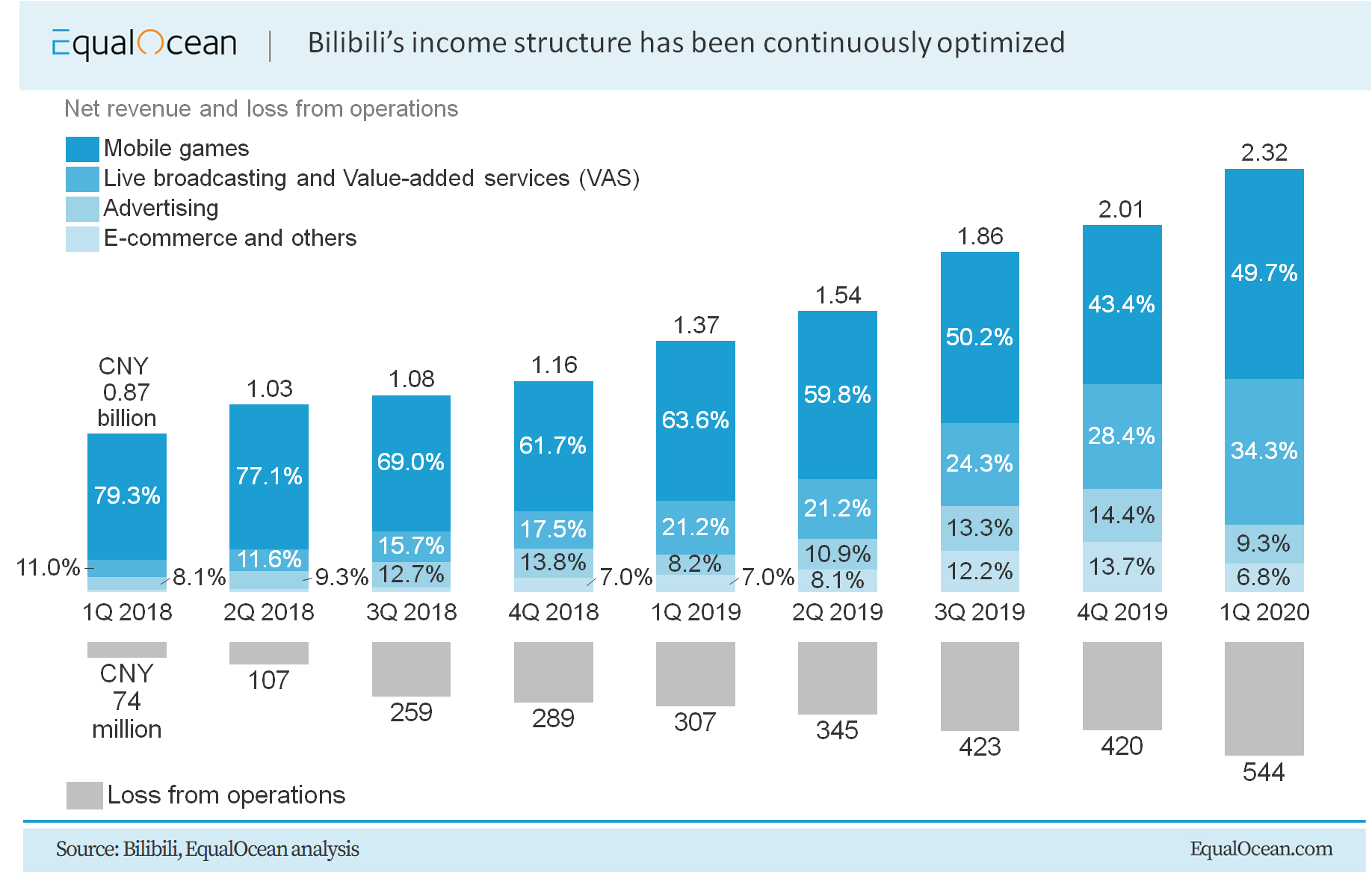 The game business, the base of Bilibili, remained solid in the first quarter of 2020, witnessed a 32% growth on a year-on-year basis, to realize CNY 11.51 billion of revenue during the three months ended March 31.

Up to now, the revenue of this segment mainly came from distributing and operating mobile games produced by other companies. As the majority of which are role-playing games (RPG), what contributes the most to Bilibili’s gaming income is the recharge volume of users rather than advertisement and esports.

Its mobile game segment mainly has three business models: exclusive distribution (32 projects; benchmarks include Fate/Grand Order and Azur Lane), joint operating (740+ projects; benchmarks include Arknights and Girls’ Frontline), and self-development (1 project). In the first category, Bilibili takes full charges of marketing and operations of the game, and has the right to price the value-added items in games. Whilst under the second category, Bilibili mainly provides promotion services to the developer of the game. This implies that compared to acting as the exclusive distributor, Bilibili has far less decision-making power under a joint operating model, and thus can generate much less revenue from the project.

The income structure inside Bilibili’s mobile games segment continued to improve throughout the two-year post-IPO period. In 2017, revenue generated from the exclusive distribution of Fate/Grand Order in the mainland of China accounted for 71.8% of the total annual revenue of Bilibili (83.09% of total revenue from mobile games). This percentage has been lowered down to 58% for 2019.

In April 2020, Princess Connect! Re:Dive started its open testing in mainland China, where Bilibili acted as the exclusive distributor. The game, which is developed by Cygames, has already realized considerable success in Japan and South Korea, and thus has accumulated a considerable potential user base in China. According to Guochan Erciyuan Shouyou Guancha (国产二次元手游观察, ‘National ACG Mobile Gaming Insights’), a widely-used source of information in the Chinese online gaming industry, Princess Connect! Re:Dive realized CNY 411.8 million of revenue in April in the mainland, and is expected to become the new profit engine of Bilibili’s mobile games segment.

However, despite the robust figure of Bilibili’s mobile games business in the first quarter of 2020, the underlying risk factors cannot be ignored. For example, the life span of its current revenue pillar – Fate/Grand Order; the current situation in China’s mobile games market led studios who produced phenomenal products tend to choose joint operate with Bilibili rather than allow the latter to exclusively distribute; the increasingly strict rules imposed by the policymakers on time spending and recharging for the minors. These will be elaborated on in the ‘Defensibility, opportunity, and risk’ part of this article, which is expected to be published this week.

Live broadcasting and the associated value-added services continued their sharp growth in the first quarter of 2020 to realize CNY 793.6 million (USD 112.1 million) of revenue, representing a 172% year-on-year increase.

Since the fourth quarter of 2019, the company has shown its ambition in the field of live game streaming. On December 4, 2019, Bilibili inked a three-year contract to exclusively broadcast League of Legends World Championship. Two weeks later, on December 19, Feng Timo, one of the most popular gaming KOLs who has over 20 million followers on DouYu (DOYU: NASDAQ) – a mainstream live streaming platform in China – announced she would end the cooperation with the company and sign a contract with Bilibili.

COVID-19, which broke out in the following months, also provided Bilibili a good window of opportunity to attract more users in the field of e-gaming and to let them form habits in using the platform to watch live gaming broadcasting.

This segment has been and is expected to continuously be a key user and revenue driver for Bilibili in the short term. However, at the same time, the onward marching of livestreaming imposed additional risk factors on Bilibili’s business, especially, in its short-term profits and long-term strategy, which will also be elaborated on in Part 3.

Despite the COVID-19 outbreak, the growth in advertisement and e-commerce business remained relatively strong in the first quarter of 2020.

The advertisement segment realized revenue of CNY 214.3 million (USD 30.3 million), representing a 90% increase on a year-on-year basis. This figure was lower than the CNY 290 million in the prior quarter.

Potential reasons for this:

1. The demand. Bilibili’s 2019 New Year Eve Concert achieved great success. With more than 90 million playbacks, it marked a significant milestone for the platform to get known by the general population, apart from Gen Zs. In this case, it is reasonable that more advertisers are considering Bilibili when making their decisions on advertising. On the other hand, advertisers usually have a tendency to spend more in the fourth quarter and spend less at the beginning of each year – this, plus the negative impact on advertisers’ budget, can explain the downward trend on a quarter-on-quarter basis.

2. The supply. Bilibili is a platform started by targeting ACG fans alone; although it is expanding to cover more content and user categories, a good community culture still lies in the center of its competitive advantage. Therefore, to maintain a sound community culture and thus maintain the high retention rate of its loyal users, Bilibili has been continuously controlling its commercialization. However, considering the current stage of its business where certain expansions are needed, we believe that Bilibili has also released more ad loads.

We expect the figure will keep widening up in the upcoming quarters in 2020.

First, the year 2020 is going to be an important year for Bilibili to attract new users, a considerable part of which will not belong to either category of ACG fans or Gen Z. This requires huge spending on online and offline marketing campaigns like holding events. At the same time, it has to maintain the engagement rate of its loyal users, which requires labor, financial incentives to PUGC creators and R&D to maintain community culture. Besides, in targeting both groups, Bilibili needs to spend more on purchasing the rights of having more dramas and movies on its platform.

Second, Bilibili’s ambition on live broadcasting required considerable spending to purchase broadcast rights of the corresponding events of games and to sign more well-known KOLs in the field.

Third, currently, the demand for phenomenal mobile games is considerably larger than the supply in the Chinese market. Therefore, more and more domestic game designer studios tend to choose to jointly operate with Bilibili, rather than sign exclusively distribute contract with it. This will likely impose a negative effect on the sustainability of Bilibili’s mobile games revenue in the future. A long-term strategy would be to improve the ability of self-development. In fact, we have also seen a flavor of Bilibili’s interest in this aspect from the USD 400 million investments it received from Sony in April 2020. This implies that the R&D investment of Bilibili is very likely to increase considerably in the near future.