A flagship in the Chinese oncology market, Jiangsu Hengrui Medicine (600276:SH) was accused of corruption in sales. This was soon followed by good news – an approval of a Phase III clinical test. Will a bright future erase the black stain? 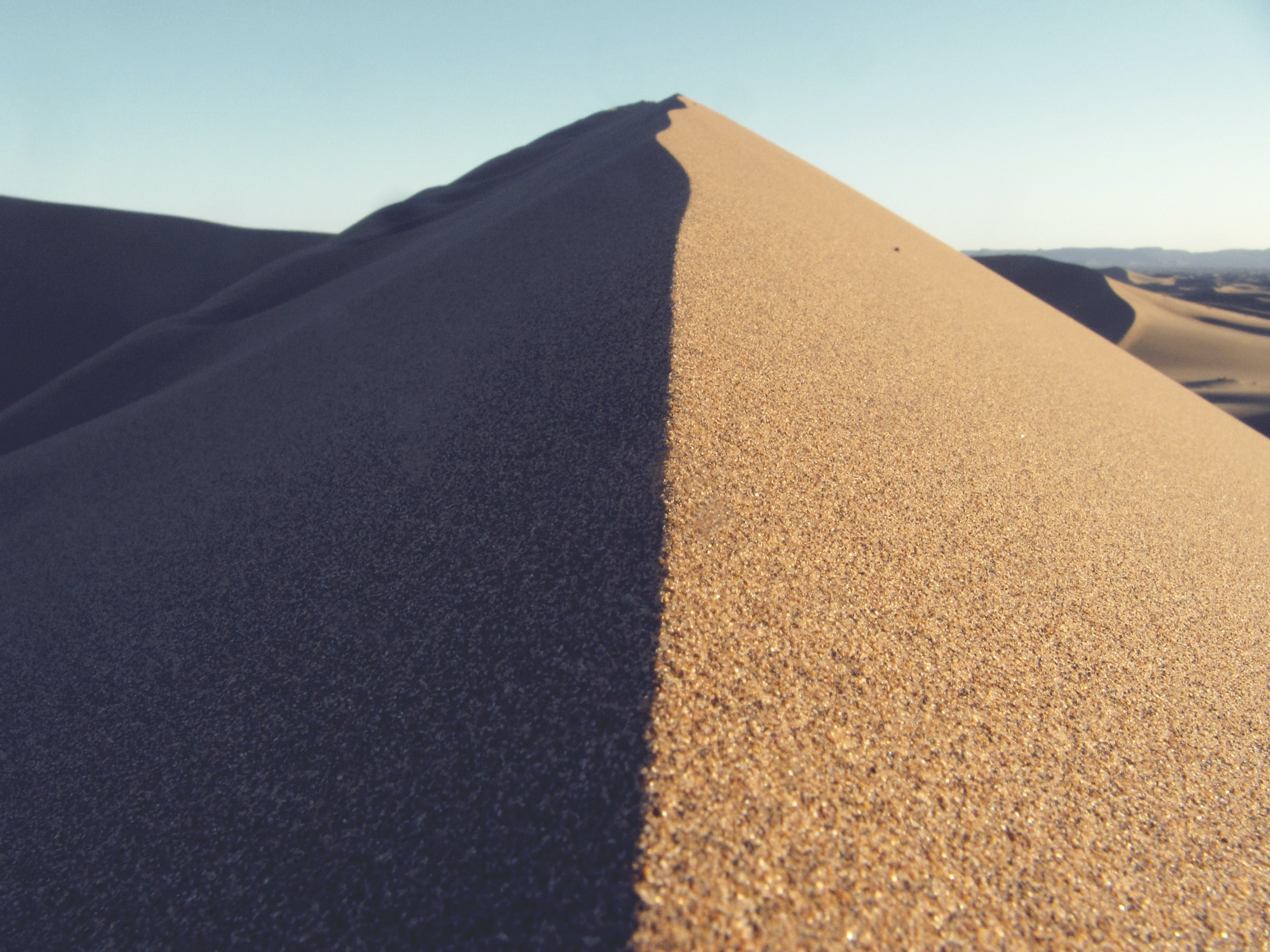 ► Jiangsu Hengrui has shown a very positive future growth driven by heavy investment in R&D along with stains – several cases of corruption scandals in the history.

► As China's healthcare reform, more pharmaceutical companies are being monitored in the public.

Looking at the oncology pharmaceutical market in China, Jiangsu Hengrui (600276:SH) has been deemed one of the flagships of recent years – unexpectedly, as the story is one of an outlier that somehow witnessed the whole history of the domestic pharmaceutical industry.

Founded as a traditional medicine factory in 1970, it advanced to become a high-tech firm in 1999, listed on the Shanghai Stock Exchange market in 2000, was approved for sale in the US in 2011 and was granted the European CE mark in 2012, etc. During the last decade, this healthcare giant has evolved to become a medicinal innovator from being only a generic drug manufacturer.

As this high-tech-driven global pharmaceutical brand boasted of its 2019 performance, with an over 30% increase in both gross margin and net margin, it soon came out that a corruption scandal was brewing, just one month after its disclosure of its annual report in April.

Here is a case of the ‘shadow in the sun.’ Although it is not uncommon to be 'surprised' by the many corruption incidents in healthcare businesses, it is still an 'intolerable' fact. It cannot help but leave the market wondering whether the next big deal will be more real or more fake? An artificial light bulb or natural sunshine?

R&D is undoubtedly the value driver, but how efficient is it?

For an innovative medicine provider, research and development is one major growth engine. The year of 2019 saw an R&D investment of CNY 3.9 billion, as much as 16.7% of the revenue. It claims that it has devoted around 15% of revenue to developing new drugs in recent years – a ratio that just hit the required R&D threshold of Chinese Star Market-listed companies.

Powered by a research team of over 3,400 people, including over 2,000 with advanced degrees above post-graduate level, this giant has a wide range of on-going pipelines covering oncological auxiliary treatments, immune system and respiratory system-related problems and other chronic diseases, such as diabetes. In 2009, six products in the pipes obtained periodic breakthroughs; among them there were two most noteworthy improvements.

The first was the approval for remazolam toluene sulfonate for injection ('注射用甲苯磺酸瑞马唑仑') to go to the market. As a safer, more effective narcotic alternative, this is expected to be applied to routine gastroscopy. This treatment for fiber bronchoscopy sedation has just been approved to enter its Phase III clinic trial on May 15.

The other breakthrough is the launch of camrelizumab ('注射用卡瑞利珠单抗'), a kind of PD-1 monoclonal antibody, approved in May 2019. However, it is a heated-competed arena. On a global scale, there are seven pharmaceuticals approved to sell these antibodies, including four Chinese companies – Jiangsu Hengrui, Shanghai Junshi Biosciences (1877:HKSE), Innovent Biologics (1801:HKSE) and BeiGene (6061:HKSE). 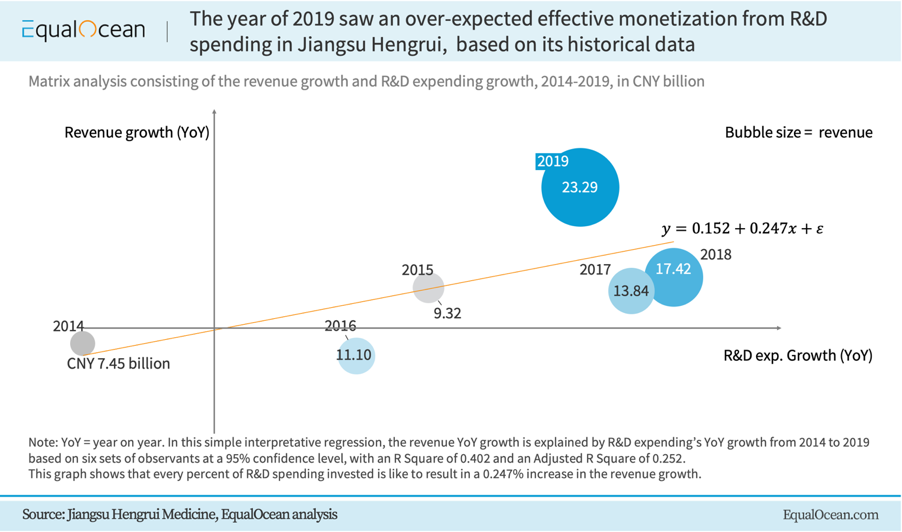 However, this business progression is not as sexy as it looks. In a look at the 2019 market, the global sales revenue of this PD-1 antibody was USD 18.9 billion. Hengrui has been a little behind, since it is not only a late entrant, but also provides more expensive products, without healthcare insurance incentives to patients. 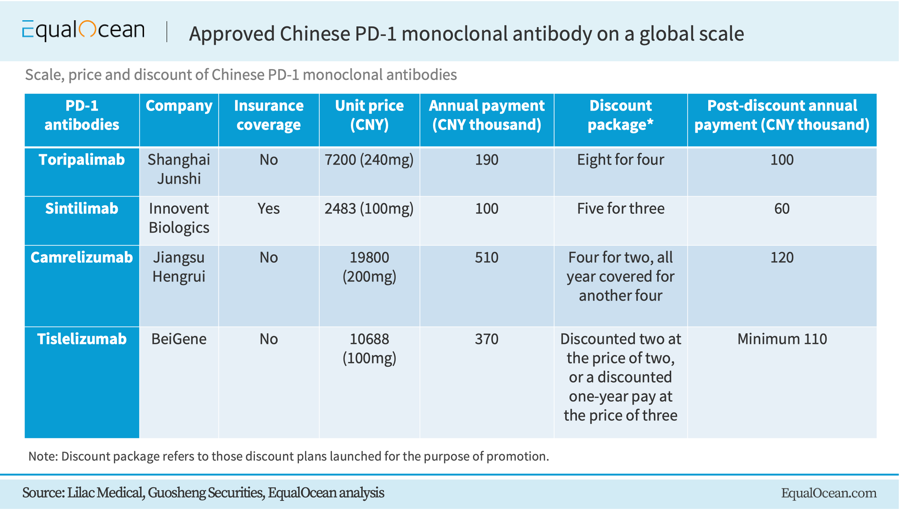 Hengrui's PD-1 antibody is the most expensive, at a unit priced at four times from Innovent Biologics at the same amount(milligram). To take a share out of the tripolar-dominated market size, it introduced a more aggressive selling strategy. No player wants to lose its portion of the market pie by being stingy. A direct result of the discount price war is that all end up giving away a lot of profits.

In an estimation about their post-discount revenues, Jiangsu Hengrui sent out 19.8 units, followed by Innovent Biologics at 14.2 units and Junshi Biosciences at 12.5 units (calculated by ex-ante expected unites minus ex-post units). As of March 2020, Hengrui has invested over CNY 893.4 million in developing this product.

An international medical giant, Hengrui never lacks in Plan Bs. Late in the first quarter this year, Hengrui announced that it plans to yield its patent and related legal use rights (exclusive clinical development, registration and sales in the market) to CrystalGenomics (083790:KOSDAQ), a Korean public biotechnology company, for a decade. This license-out will guarantee Hengrui a USD 1.5 million front-pay, R&D and market launch milestone pays totaled at up to USD 2 million, and sales milestone pays of up to USD 84.25 million and 10-12% from net revenue since the commercial stage.

However, no matter how flashing and eye-catching its business tricks and financial performance look, it has acquired noticeable stains – like many other pharmaceuticals.

This May saw a breakout scandal about sales corruption in Hengrui Medicine. The pharmaceutical company bribed the head of the anesthesia department at Lishui ('丽水') Civic Central Hospital in Zhejiang province with dirty money to the tune of CNY 2.77 million. 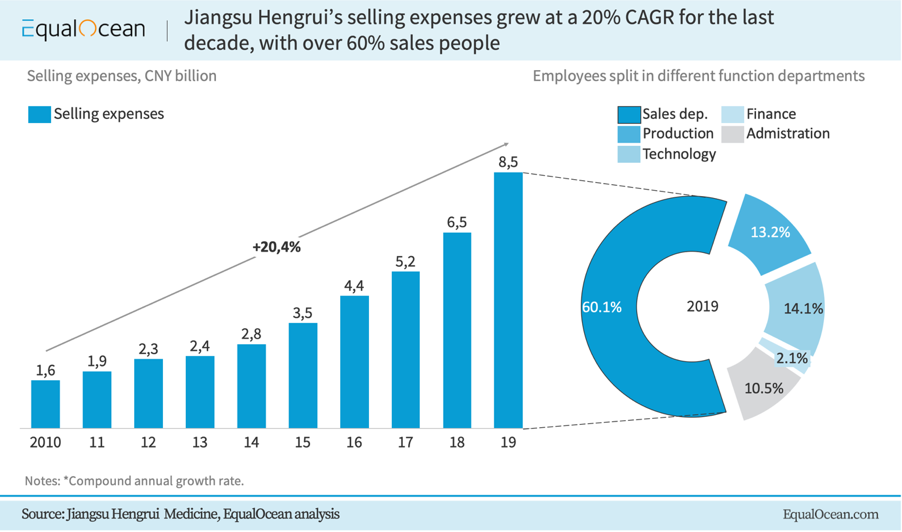 This commercial bribery problem has been a historical issue, with a root in 'Gold Sales' ('带金销售') – a kind of sale to provide kickbacks to doctors with prescription rights. In the past, the pharmaceutical business was generally sales-oriented, so companies wasted a lot of money on selling expenses instead of investing in innovation.

Although this gray area has been known about for years, it has not been eradicated. Now China has escalated healthcare reform to the anti-corruption stage, by introducing a national policy, Centralized Purchasing of Drugs for Public Hospitals ('带量采购'). It is still too early to judge how much it can clean the healthcare industry – several healthcare companies are being cleaned out of the medicine distribution business, such as Yunnan Baiyao (000538:SZ). (See EqualOcean's analysis here)

A promising but unexpected market

As the competition gets fierce, companies should be more ambitious and eye more niche opportunities along the industry chain – not only to get hold of the current position, build up a more robust advantage moat, but also to diversify idiosyncratic risks.

Chinese National Medical Products Administration (NMPA) announced on March 25 that paclitaxel for injection (Albumin Bound) provided by Celgene was banned from importing, sales and use in China. Celgene is a biotechnology company, delisted from Nasdaq on May 4 and merged to Bristol Myers Squibb (BMY:NYSE).

Paclitaxel is a core ingredient that kills cancer cells and is widely used in oncological medicines. And the albumin-bound type is the most effective one with global recognition by the Food and Drug Administration (FDA) and the National Comprehensive Cancer Network (NCCN).

Before the ban, there was a triopoly – a situation in the domestic supply of paclitaxel: CSPC Pharmaceutical (1093:HKSE), Hengrui Medicine and BeiGene, who was in strategic cooperation with Celgene. 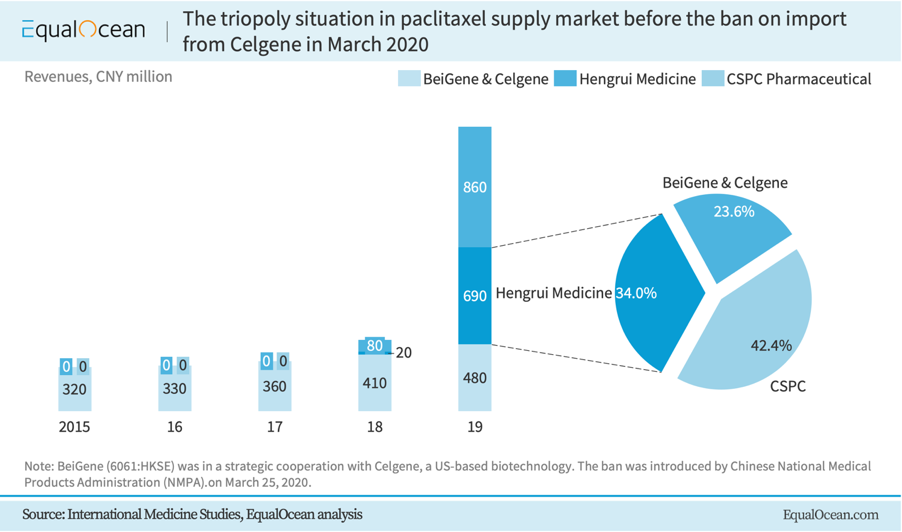 It is very like to see a duopoly market in this cancer killer in a short time. The total market size of paclitaxel in 2019 is between 17 million and 18 million units. According to International Medicine Studies' data, the new centralized procurement has ordered an amount of 136,890 units of albumin-bound type. (100 milligrams per unit).

For sure, Chinese pharmaceutical companies have a long way to go. A harsh attitude towards old stains is a must to embrace a more transparent, equal and clean industry environment.